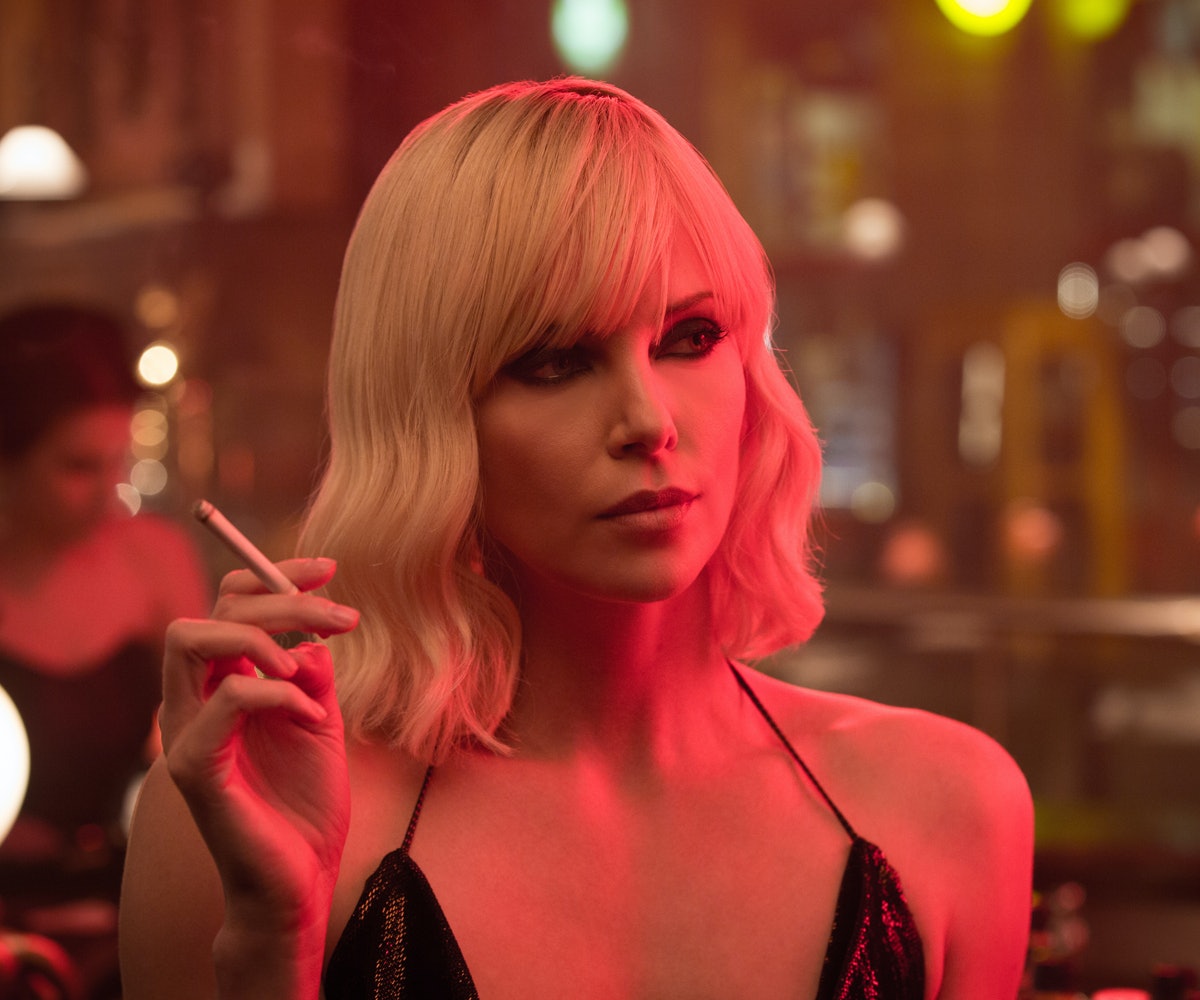 After catching a screening of Atomic Blonde earlier this year, we declared Charlize Theron the greatest living action star, man or woman. When the Cold War spy thriller finally hits theaters this Friday, you'll get to see why. In it, Theron plays MI6 agent Lorraine Broughton, who goes undercover to recover a list of some kind—we think. The plot is a bit fuzzy at this point, and if we're being honest, kind of inconsequential. You're going to Atomic Blonde to watch Theron kick all sorts of ass, including during an extended sequence in a stairwell—done in one continuous take—that ranks as the best action sequence of the year. We recently spoke with Atomic Blonde director David Leitch, a former stunt coordinator who gave the world John Wick, about what makes Theron such an effective action star, and his next movie, a tiny project called Deadpool 2.

How did you come aboard this project?

Charlize had the project. They had brought it to Kelly McCormick who is actually a producer on it, and Kelly, who happens to be my wife, was the one who brought me on to the project and picked me to direct. They had gone through a list of directors and they couldn’t land on anyone that they felt was servicing the material in an interesting way. And there was this opportunity to flip the material on its head. What if you added a John Wick world to it? So, if you think about Berlin as this sexy, neon, graffiti-drenched place... and I’d done six movies there and I’m also a child of the ‘80s. So I had this revelation, like, wow, what if we made a referential ‘80s punk rock spy movie out of this noir, twisted tale? And so I came in with a pitch no one was expecting, because everyone was pitching noir, noir, noir, and I was like, no, let’s go the opposite way: soundtrack, rock and roll, great outfits, color. And the producers and Charlize responded, and they were like, "Let’s make this."

What do you think makes a great action star and how does Charlize embody those qualities?

What makes a great action star is having both the ability to do action and the ability to deliver drama at a high and compelling level. In Atomic Blonde, it was my challenge to thread the needle in making her cold and a badass, but also empathetic, to be a hardcore spy and also have this humanity, and that takes the talent of an actress like her. You know you can’t do that with the typical sort of genre action star. The movies that are really iconic in the action space, they usually have a great actor attached. You can deliver the drama and then the actions make her real, as opposed to action for action's sake. She has the acting chops that are undeniable.

What was her training process like and how involved were you in it?

With her it was three months. We had our fight choreography team working with her. So she would do three to four days a week for four hours, and she would do a couple of hours of choreography drills, then there’d be an hour, hour and a half, of really just training, getting in shape. A fight scene is an athletic event, if you can imagine playing a game of basketball but playing it for a 12-hour day.

How involved is she in her stunts compared to the average movie star?

As a stunt coordinator in my past life, I have to make the assessment of what a person’s ability is. And when I ask her if she has the ability to do something safely, then you obviously want them to do it because you can shoot it in a better way. So, with her, she was able to do a lot of that stuff. We did have a great stunt double with her too, this woman Monique Ganderton, who’s a veteran stuntwoman who is great. But in terms of actors who do their own stunts Charlize is right up there.

How does the audience benefit when an actress like her does her own stunts? Do we notice?

I guess a sequence like the stairwell, where 95 percent of that is her, and we find just the real precise places to put in the double. And it’s generally not for the performance of it all, it’s just for the safety of it all, where some of the violence that we wanted to achieve, you just can’t risk the person not coming to work the next day. What you can see when you go through that training process and you have someone who’s willing, and you get to see spectacles like that where you’re with the character the whole time, that was by design. We put her through that process so we could tell that compelling story of being with her through that whole sequence.

One of the things I love about that scene is she gets it as much as she gives it—it looks like she’s really getting hurt. Is that to sell it to the audience on the brutality of the scene?

Definitely doing fights like that is physically demanding, and you’re going to get bumps and bruises. But there’s a lot of design to make it painful and great makeup to make it look painful, and a great performance. She had a lot of bumps and bruises either way; her arms were always purple by the end of the day.

With Deadpool 2, how much do you follow the blueprint or tone of the first movie and how much room do you have to play with it as a filmmaker?

That’s a really good question. I think you have to be true to the DNA of the franchise because it is so successful and it’s what people will love and what they will expect. But I’m a filmmaker and I have my own distinctive vision and I want to impart that on this, too. So it’ll be a delicate mix.

When you set out to cast the characters of Cable and Domino in Deadpool 2, is there a lot of pressure to get it right? How do you finally decide?

It’s a delicate question. I mean you could cast so many people and go in so many directions and at some point you just have to go with your instinct about the bigger picture and how is this cast going to look and how close is this person to the character already. So yeah, there is always that hard time when you’re down to the last three candidates and you’re like, "Wow, they could all in their own way be amazing, but who’s the right one for the ensemble?" Then you start to put the pieces of the puzzle together and you hope for the best.