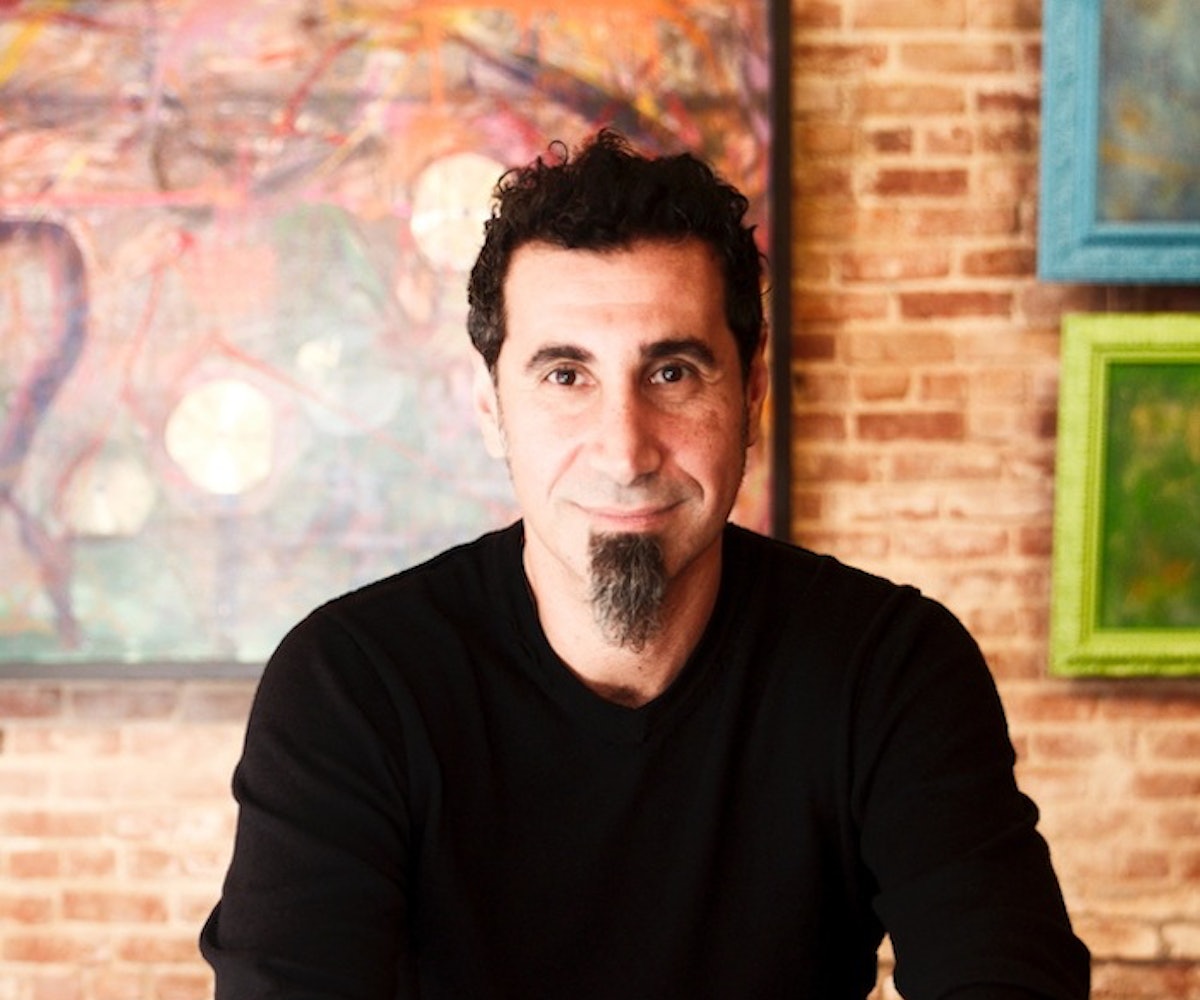 Serj Tankian is an artist in every sense of the word. Most of us know him as the intense operatic vocalist/ activist from System of a Down and maybe for his recent jazz and orchestral outings, which have garnered critical acclaim. He’s a poet, a thinker and a major human rights activist. But, as he will tell us, some passions just keep emerging. Last week in Hollywood, the self-taught artisan Serj Tankian packed PROJECT GALLERY full of celebs, musicians and friends like Tom Morello and Moby at his first immersive musical art show “Disarming Time." Not satisfied with just painting or composing, Tankian decided to marry mixed-media art to his music and then created an app that would deliver it as a whole new experience to the consumer. Say what? Check it: Your phone scans any of his 22 paintings, instantly recognizes them, and then pulls up a menu for you to listen to a song specific to that painting. You can also read the artist bio info or learn a little tidbit about the piece. Whereas you might just whiz through a gallery and take a minute long glance per work, this app engages each individual with a timed sensory overload, engaging the patron on a journey of sight and sound that transcends both mediums ranging from one to four minutes. Since we couldn’t photograph the actual show, allow us to explain: It's totally trippy. You begin to get lost in the spatter pattern and layers and see things as the music overtakes you. There’s things glued in, photos tucked underneath- a drip that has a shape. The paintings have a whimsy and violence to them; Some are dark, some are day-glo. And all of them have clock faces in various stages as the recurring theme. The music varies drastically painting to painting, ranging from classical Chopin-like piano suites, to full-blown jazz that channels Monk and Coleman, and even dips into a sinister electronic ether. After about 30 minutes, my mind was dripping out of my ears and I got to bounce around the show with the incredibly gracious and infectiously enthusiastic Serj Tankian. The interview below is a cut and paste mash-up of two conversations we had before doors opened.So, you didn’t go to art school.

You didn’t go to music school. What fuels your creativity? Where does it come from?The only way I can explain it is the excitement of wanting to play.

Was there a formal exploration? Just find yourself at one point saying “Mom, I want to play piano or the guitar?”You know, its interesting, When I was young my parents always encouraged me to learn music but I was never interested. I would start playing music in college. It was a little Casio keyboard I got as a way of calming my mind from my studies at university. It was an escape, but a healthy one obviously. And that led into this love for music. I never took any classes, I didn’t know what I was doing. And now with music, I kinda know little about what I’m doing after all these years of producing, working with orchestras, rock bands, everything right? And now with the art, I’m back at that stage of not knowing what I’m doing. It’s exciting. Freeing. I always want to be surprised by what muse brings to me and what I can do.

Which came first for this show? The music or the paintings?The music. That’s where I’m coming from, you know. I’m not known as a painter. This is the first time I’m doing this, you know? So, for me, the idea all together was to visualize the music. I also wanted to create tangibility to the music. So yeah, my process was I would listen to the music and paint. Most my painter friends do. I don’t know anyone who paints in silence.

So you never did a painting and decided after the fact, “I want to switch them to this other musical piece?” It was just a singular experience?Yes. Singular. I was writing the music, printing the score sheet of the first few bars so that I know this is the first bar (points to the music bars in several paintings) and this is where everything goes and I would grab clock faces which I ordered online, ebay, and all that stuff...

I was wondering about that. While many of the clocks don’t have arms, there are plenty that do and have specific times marked on them. Was this conscious? Is there any hidden meaning?I had seen a French documentary called “Gleaners”, who are people that create things from items that already exist, and I found the concept really compelling. In the documentary, a lady had bought a clock from a pawn store that had no arms. When you look at a clock with no arms, your mind just goes blank…

Its unsettling.It could be unsettling. It could be timeless. To me, it was a profound feeling. So I went out and got 4 or 5 clocks from thrift stores and broke the arms off and I wrote poetry over them and gave them to the System guys and Rick Rubin during the recording of Mesmerize/ Hypnotize. So that’s where the clocks came from and that idea was stuck in my head for years. When I decided to create the paintings, I wanted to bring the idea of clocks without arms into it and the idea of the music visually representing itself. That was the name of my first piece (points it out) and “Disarming Time” is the name of the exhibit.

So I’ve noticed this subtle violence that comes through in many of the pieces and I was thinking about all the struggles you’ve fought against with awareness, human rights, and the Great Crime*…Interesting. Interesting. I didn’t even think of that. I’ve always been curious about how extraordinary an artistic experience could be if we involve more than one sense.

Do you ever find yourself held back or second guessing your process as a painter?When I was working on my first painting, I stepped back and asked “Am I doing the right thing and what not.” My neighbor who is actually a painter herself, looked at me and said “Just go! Don’t worry about it…it doesn’t fucking matter.” And I was like “Really?!?” So I looked at her and said “If I feel like doing this..” (Serj leaps in the air with imaginary paint brush and whips it against the canvas) she was like “THAT’S awesome!” It was kinda like that. Its just having fun! Its kind of the same with music- People ask me “When do you walk in your studio to create music?” and I always answer “When I have nothing to do. I walk in when I want to play. You know, when I want to have fun.” Thats how a lot of my songs were written for all of my records. And so this (gestures to the gallery) is that: You walk in, you have a piece of music. It’s exciting: You wake up early in the morning and you’re like “I want to do a painting today. But first (laughingly) you gotta go into the recording studio and create something or find something you have that might inspire you to create a visual piece.

So how did the app “Eyes for sound” come about?With a lot of tinkering. At first we were putting in little speakers. I’ve got one canvas there that if you open the back there’s speakers, mp3 player, little bluetooth, USB hub. We were thinking about using all this stuff and what not but it got too tech heavy. After a while it got to “Wait a minute..are we creating speakers or art and music?”. At the time I didn’t know about optical recognition but came up with the idea that asked “Can we create an app that somehow recognizes a painting?” A lot of museums give you the thing that you walk around with and its preprogrammed and all of that. This would have to be more interesting. It had to recognize the painting. So I found a company that specializes in making such apps and created “Eyes for Sound” out of that concept.

Do you want to implement this app in museums? That seems like the logical step.Yes, Yes! This is experiential, its not just an art exhibit. We’ve thought about this. It would certainly work for a museum. But museums never want your phone out. We’re encouraging the phones to come out. You have it on you anyway. It’s also admitting that this is what our life is. Who doesn’t pick it up every couple of minutes to text or something? Might as well use it! One of the reasons we wanted to brand “Eyes for Sound” out separately is that we want to get other artists involved. In fact, we’ve invited a lot of artist friends over tonight not just so they can see the exhibit but so I can talk them into doing a few pieces for an exhibition we can do together. Because that is WAY more interesting than one artist exhibition as far as I’m concerned. The next one, besides doing it with other artists, would be “How do we smell this painting, how do we touch this painting?” Exponentially experiential.

Okay.. Now for the rapid fire. What brings you happiness?The choice of happiness.

What posters did you have on your wall as a kid?Wow. I haven’t been a kid in a long time. Gotta think about that. I think there might have been a Farrah Fawcet on there. It was the 70s…6 million dollar man. Steve Austin.

What band would you like to play at your funeral?Whoah. Morbid.

Art is dark.Yeah, art is dark. (laughs) I think Sisters of Mercy.

Lucretia?Marianne! I love that song.

Man. Thank you SO much. Beyond words.