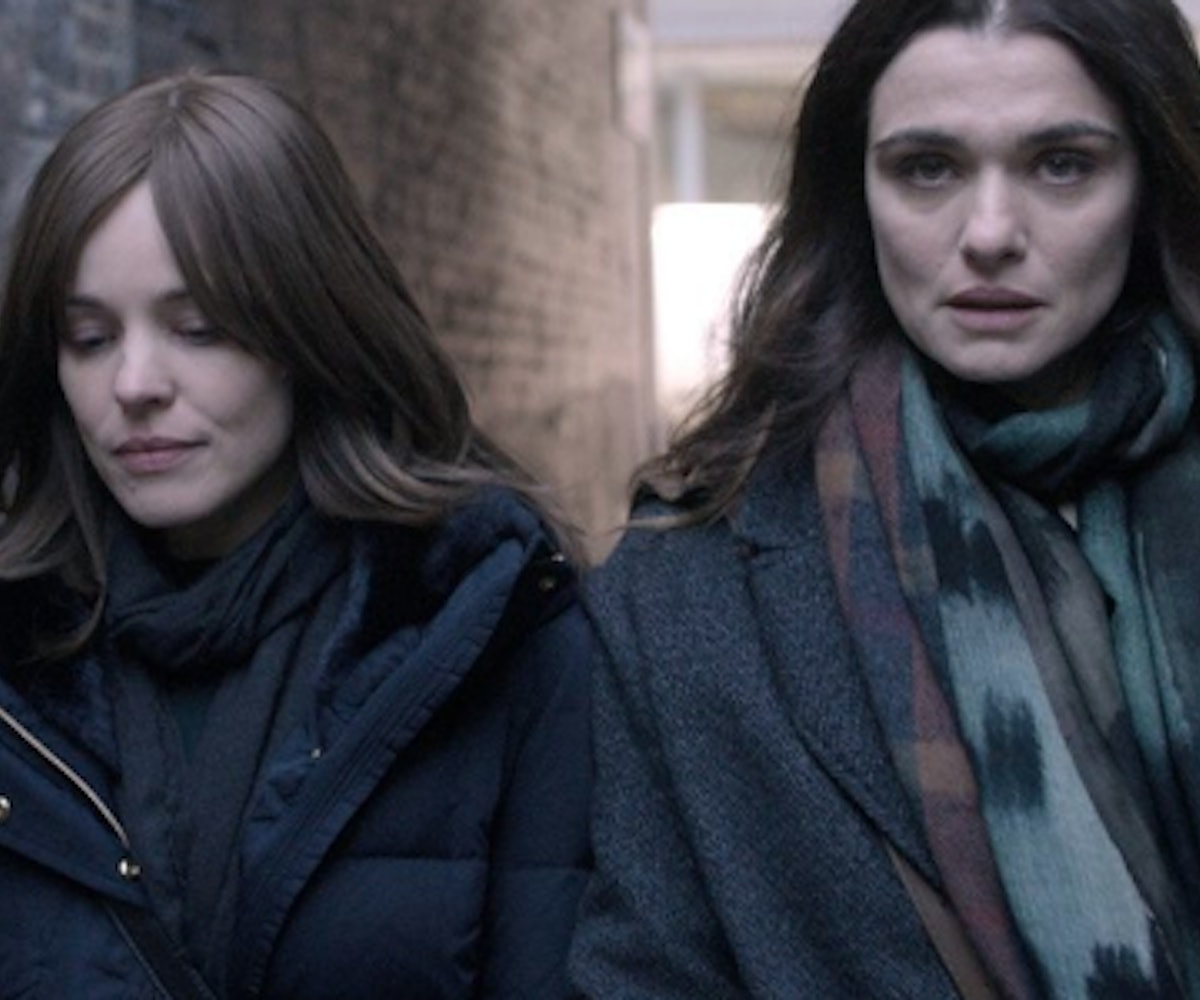 The premise of Disobedience is a simple one: While still young, two people have an illicit romance. One grows up and moves away, only to return and find her young lover now married to someone else. Passions flare, and the illicit romance of their youth is reignited. Chaos ensues.

A narrative like this has all the makings of a fiery film, one that virtually explodes off the screen, reflective of the heat between the two ill-fated lovers. And yet, the most marked quality of Disobedience is its quiet; the film, for the most part (and we'll get to the sole exception), has an aura of contemplation and feels as self-contained as the community in which it is set: London's Orthodox Jewish community.

Based on a novel by Naomi Alderman, Disobedience tells the story of Ronit (Rachel Weisz), the daughter of a prominent Orthodox rabbi, who has fled her community, and country, and lives in tacit exile in New York City, working as a photographer. When Ronit gets news that her father has died, she returns to London to sit shiva with the community. Her sorrow at the loss of her father is real. Prior to leaving New York, she tours the city as if in a trance, has sex with a stranger in a bar, rends her garments in grief, and with her teeth. Weisz beautifully captures Ronit's muted horror at the realization that she is now fully unmoored from the world in which she grew up.

But actually, there is one more tie that binds Ronit to her past: Esti (Rachel McAdams). It was Esti with whom Ronit had an illicit love affair in their youth; it was this forbidden love which made Ronit flee the only home she'd ever known. And it is Esti who, as Ronit quickly discovers, has assumed Ronit's privileged place in the community, because Esti has married the rabbi's protege, Dovid (Alessandro Nivola), and now leads precisely the kind of life that Ronit rebelled against, the kind of life Ronit knew was a lie.

It is a life delineated by traditions—everything from how you mourn to how you eat to how you dress to how you have sex is done according to strict rules. There is no room for transgressions, but there is plenty of room to get lost within that order. And it is clear that Esti is lost. She has found a kind of happiness in her ordered life; she loves her job as a teacher, and her husband is not a bad man. But it is also clear that Ronit, despite having fled this way of life, is lost, too. She has been all but erased from this community, and completely disowned—both financially and spiritually—by her father. And so it only makes a certain kind of sense that these two searching women find each other. And it is only when they do that the movie really comes alive.

There is one scene in Disobedience that will have everyone who sees it talking about it. Perhaps predictably, it is the sex scene between Ronit and Esti—we have definitely not evolved enough yet as a culture to a point where people don't still get giddy about seeing two women have sex on film. And yet this scene feels different from other notable lesbian sex scenes, those that often feel borderline exploitative, so obviously are they shot from the perspective of the straight male gaze (see: Blue Is the Warmest Color). It's not that this scene isn't explicitly erotic, it definitely is; rather, it's that there's a tenderness to it, a respect that gestures to the fact that these are grown women who have a love that's survived distance and years of being apart.

But what's remarkable about it is the way in which it's a scene filled with ecstasy, a religious fervor—clothes are rent and bodies contort, and it becomes the one time in the movie where the appeal of really believing in something becomes clear. Only, while it never makes any real sense why people would willingly lead muted lives bound by constrictions for a religion that seems to offer not much more than a colorless life (as depicted in the film, at least), it becomes obvious why people would do so for love, for sex, for the possibility of a few moments of ecstatic pleasure.

Sex—or, rather, connection—then, becomes the thing in which you can believe, the religion of the future, or at least the present. There is something specifically ritualistic about the moment when Ronit spits into Esti's mouth; this simple exchange of fluids feels akin to the sipping of wine at the Shabbat dinner table. It is a reminder that we all come from the same place, we are all made up of the same things, and we will all return to the earth when our lives are over. But until that time comes, maybe we should find something to believe in, and that thing can be one another; we can slake our thirst with each other, and find ecstasy—and agony—in the corporeal, and make that into something truly spiritual.