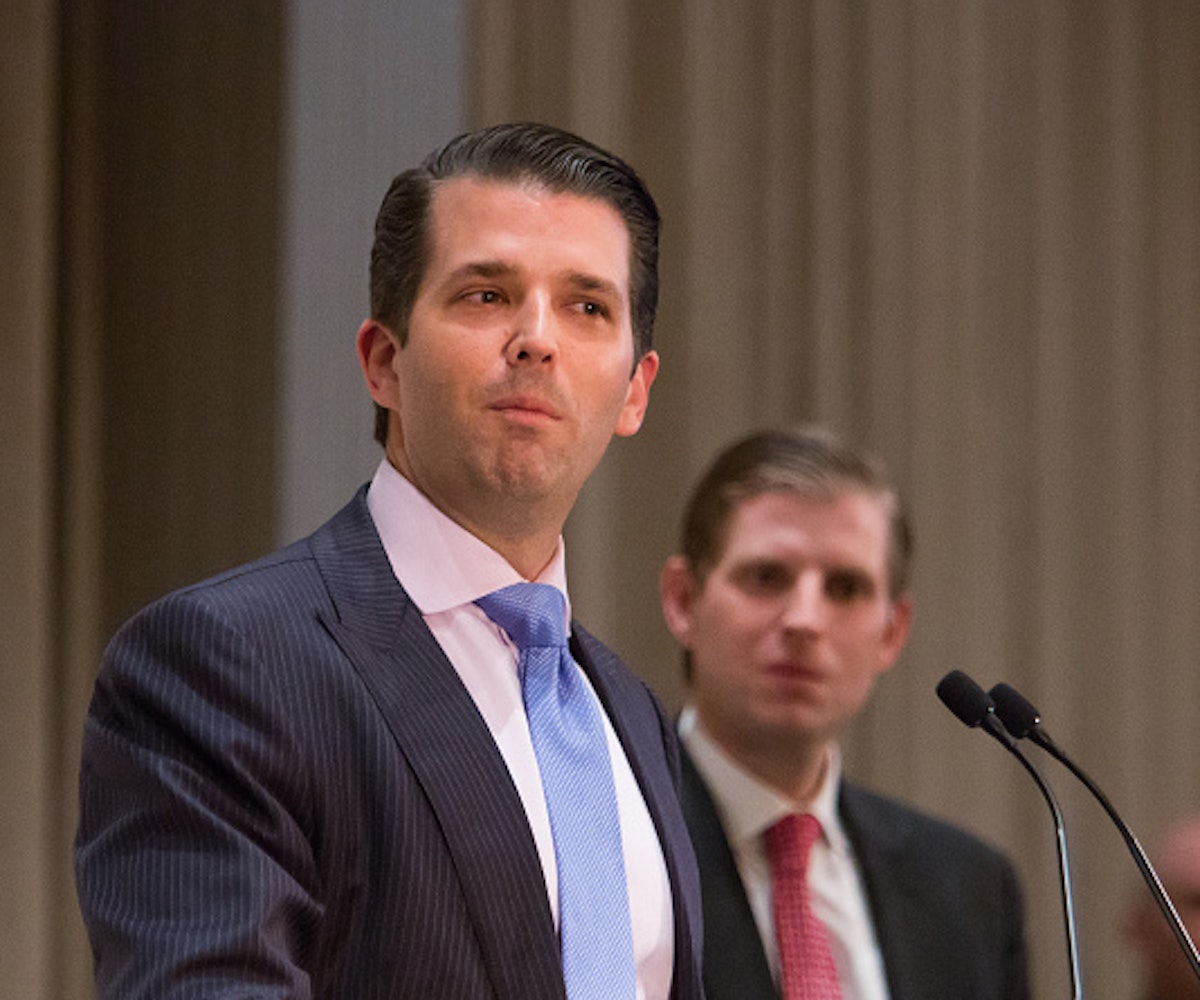 Donald Trump Jr. is the latest in the president's cohort to be caught meeting with the Russians during the 2016 election. Trump Jr., along with Jared Kushner and then-campaign manager Paul Manafort, met with a Kremlin-connected Russian lawyer at Trump Tower last year in the hopes of gaining damaging information on Hillary Clinton and the Democratic National Committee.

The discussion with Natalia Veselnitskaya was arranged for the sole purpose of helping Trump's campaign, according to the New York Times. Trump Jr.'s story has changed twice over the course of 24 hours. He initially said the group “primarily discussed a program about the adoption of Russian children.” In his second statement on the meeting, he actually admits the real purpose of the sit-down, to obtain damning intel on Clinton.

A spokesman for Trump's legal team, Mark Corallo, told Politico that the president wasn't aware of the meeting between Trump Jr. and the Russian lawyer. Republican officials are downplaying the importance of the conversation, with the White House chief of staff, Reince Priebus, calling it a "big nothing burger." That, however, was before Trump Jr.'s second, contradictory statement.

“It was a nothing meeting,” Priebus said on Fox News Sunday. “What I can tell you is from my communication with our team on the subject, there was nothing to it. It was a 20-minute meeting. It ended after everyone was decidedly sitting there saying there’s nothing happening here.”

What's more, Veselnitskaya's statement contradicts Trump Jr.'s second statement. The lawyer, who was introduced to Trump Jr. via an acquaintance from the 2013 Miss Universe pageant in Moscow, said in a statement on Saturday that “nothing at all about the presidential campaign” was discussed during their meeting. She added that she's “never acted on behalf of the Russian government” and “never discussed any of these matters with any representative of the Russian government.”

Monday morning, the Kremlin denied any knowledge of the meeting. Putin's spokesman, Dmitry Peskov, told Politico they "cannot keep track" of every Russian lawyer and their meetings in Russia or abroad.

Meanwhile, Trump said in series of tweets that he "strongly pressed" Putin “twice about Russian meddling in our election," and that the Russian leader "vehemently denied it." He added that he and Putin discussed "forming an impenetrable Cyber Security unit so that election hacking, & many other negative things, will be guarded and safe."

Cyber security seems like an unusual topic of conversation to have with Putin, given that multiple intelligence agencies have concluded that Russia interfered with our election. Trump later tweeted that just because they discussed a cyber security unit "doesn't mean I think it can happen. It can't." Okay, then.