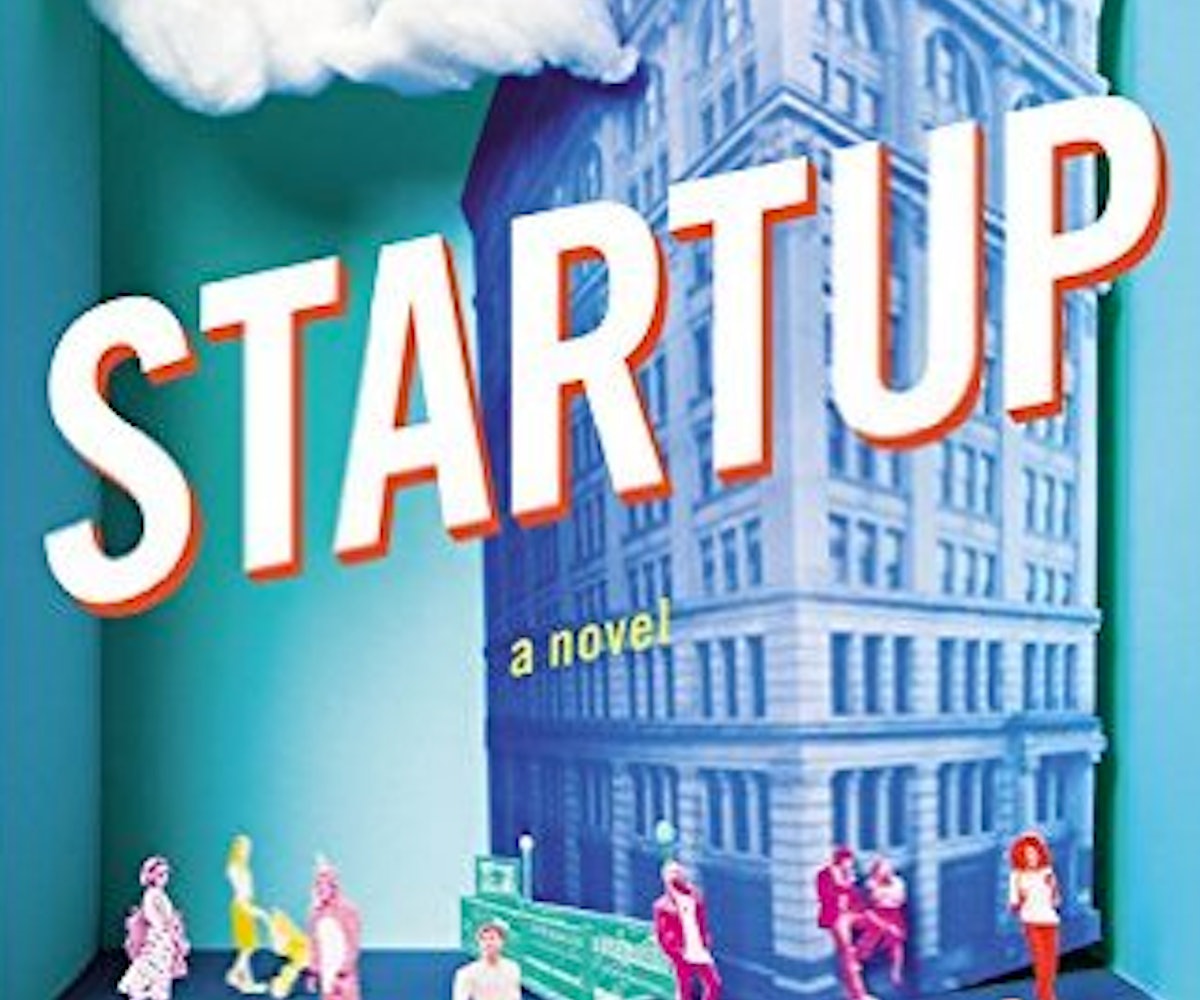 This is a question that maybe should be the start of every interview, but definitely the start of this specific interview with Doree Shafrir, whose hilarious, trenchant debut novel, Startup, depicts the dueling—and, at times, conspiring—worlds of New York City's tech and media scenes and the people within them, including many men who, you know, are pretty bad.

Shafrir laughs when I ask her that question over the phone; I laugh, too. It's reductive, of course. Not so much because men aren't bad, but more because, particularly as depicted with Shafrir's uncanny eye for the minutiae of the type of people who populate her book (start-up founders, bloggers, VC heads), these men are both more and less than bad; they're both well-intentioned and self-serving; they're duplicitous and still would describe themselves as "honest to a fault;" they hold huge amounts of power, and they constantly feel like that power is threatened; most of all, they're infuriatingly recognizable.

"I don't know why men are so bad," Shafrir says to me. "I think that white men have been in power for a very long time, like basically all of time, and now that other more marginalized people are asserting themselves, it's very threatening. At the same time, I think the bad behavior of some white men has gone unpunished, and so it gets reinforced that that behavior is okay."

Does it ever. When Shafrir first started writing Startup, it was January 2015—"I don't think Donald Trump had even announced his candidacy yet," she says—but there were still plenty of high-profile examples in the tech world of prominent men behaving badly and getting away with it. Shafrir mentions the Ellen Pao and Kleiner Perkins trial, in which Pao sued her former employer for gender discrimination, citing ample evidence of a biased workplace. And yet Pao lost the suit. Shafrir remembers, "I was following that pretty closely and was really sort of... I was shook when Kleiner Perkins was found not guilty. It seemed to me like, 'Oh my god, her case, it's open and shut. Like, clearly she was sexually harassed and treated unfairly.' And then for them to just be like, 'Nope,'  I was like, 'Wow, how is that possible?' And now, looking back, it's like, 'Oh that was foreshadowing.'"

Indeed it was. In the time since the Pao trial, there have been seemingly endless incidences of blatant sexism and gross discrimination revealed at some of the most high-profile tech companies around (Uber, anyone?). Though perhaps it's not so much that Shafrir's interest in this world would prove prescient as it is that cases of men in power abusing that power are, well, timeless. Easily one of the most impressive things about Startup is that, considering how rooted the narrative is in a specific time and place (New York City in the mid-2010s), there's no need to be well-versed in either the tech or media worlds in order to enjoy reading it. Rather, the novel is compulsively readable regardless (I devoured it over a weekend, and then didn't want to stop thinking about it, so I started mentally casting the TV version of the novel), filled with familiar and welcome archetypes, even if the details are specific to the setting.

Startup centers around Mack McAllister, a mid-20s founder of a wellness app (it sends users inspirational messages to prevent them from feeling down; it knows to send those messages based on data mining text messages and emails in the service of determining users' moods), who is trying to get millions of dollars in funding, and who accidentally sends a pretty desperate sext to an employee whom he has been casually seeing. This sext is seen (and then photographed by) a young journalist named Katya Pasternack, who works at online media outlet Tech Scene, where she's been mandated by her 40-year-old boss, Dan, to start coming up with bigger, splashier stories, the kind that can go viral, the kind featuring dick pics? Ding ding ding.

Shafrir is a veteran journalist, having worked everywhere from Gawker in its early days to the New York Observer, and has been at BuzzFeed, first as an executive editor and now as a writer, for several years now. Though she now lives in L.A. with her husband (with whom she hosts a really incredible podcast), Shafrir's portrayal of New York City is spot-on, and she navigates the ins and outs of these two professional milieus with an impressive facility that never stereotypes its subjects, and rather reveals new facets of what could be one-dimensional characters in lesser hands.

This is, I think, because, despite how funny the book often is, it's clear that Shafrir holds a good deal of compassion for most of her creations, understanding that the familiar tech maxim of wanting to improve the world almost always does come from a good place, even if the execution—and the sense of entitlement that is inherent to anyone who thinks he is the only one who can make the world better—is flawed. Shafrir tells me, "One thing that I did want to also make clear with Mack is that his problem is not that he's doing bad things for the world. He has an inflated sense of ego about how much of an impact his app can have, but it does come from a good place. Hs is trying to help people. It's in a really creepy way—and who knows if it actually works?—but his intentions are pretty good. At the same time, his intentions are good because he thinks he knows what's best for everyone. Which I think is like a very typical start-up mentality."

This type of patronizing thought process, which is so common in the tech world, is also incredibly common in the media world, a reality which Shafrir handles ably. And much like tech, media is an industry which has existed for some time but is now rapidly changing in order to keep pace with new developments. This means, generally, that while media and tech may tout the work they're doing as being revolutionary, it's still the same type of machine that is trying to get the work done—and the same people in power who hope to benefit. Shafrir says, "I think one thing that I wanted people to understand is that, like, the brave new world is really just the brave old world with younger people. If we pull back the curtain a little bit, the hierarchies and the behaviors that have been part of corporate America for decades are being replicated, particularly when it comes to treatment of women and people of color."

Over the course of the novel, it's this revelation, not so much that the emperor has no clothes and more that the emperor is a mere factotum in a J. Crew navy blue gingham shirt, while the real power play is going on behind the scenes, enacted by people who have more money than any emperor in history ever has. What Shafrir reveals is the truth: In order to dismantle these archaic power structures, those who have historically been oppressed and whose recent power gains are still given and taken at whim by those who retain the real power must band together in an effort to take down the bad guys at the top. This could mean making sure to report incidents of sexual harassment, even if it makes your life harder; it could also mean supporting a coworker who needs to do the same. It could mean making sure to hire and work for companies with a commitment to diversity and transparency. It could mean any number of ways of standing up for the principles that you know are right. It definitely means understanding that being complicit in systems that continue to marginalize women and people of color is unacceptable, and only perpetuates the patriarchal shit storm we exist in today.

As Shafrir says, "I wanted people to understand that there's bad stuff lurking even in the quote, unquote nice guys, and maybe it's especially the people who see themselves as nice guys, as saviors, that you have to be especially wary of. Granted, that is a very cynical way of going through the world. I don't want people to think that in every nice person, there is actually evil lurking, but what I would like people to say is let's just question things a little bit more, let's not take everything at face value."

Startup is available for purchase now.