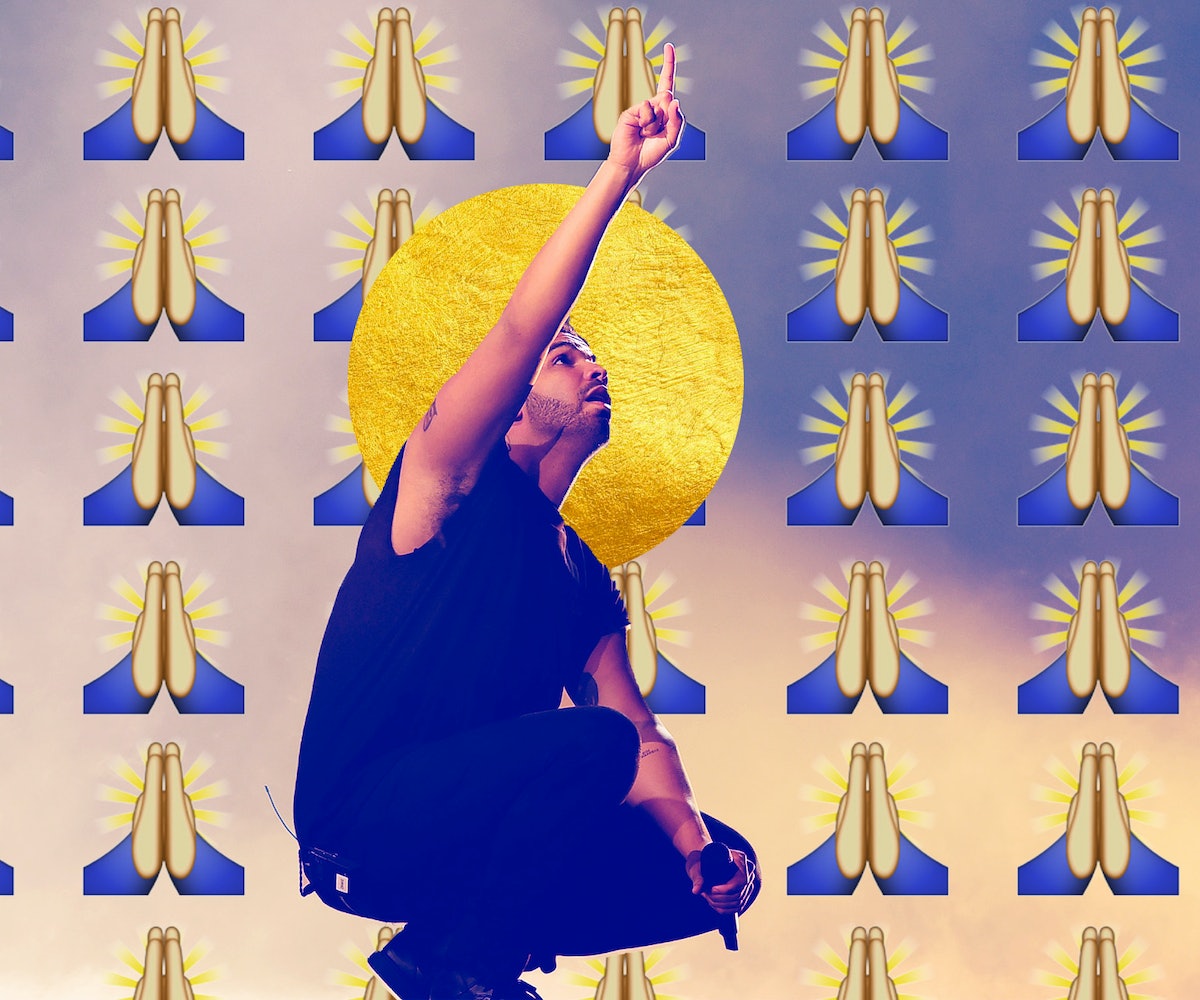 Event producer Brianni Taylor is commemorating the album of Summer Sixteen with a Drake-themed Views exhibit. Taylor previously held a Kanye West-themed Life Of Pablo art show last May to much success, and her latest venture—complete with art, food, libations, and a karaoke contest—will pop up in New York on October 10.

Taylor's vision is to combine music with other art forms to create an interactive, immersive experience that allows fans to fully engage with an album. "When artists have cult followings, their fans want to be a part of anything related to them. If a person can go to an event where they can hear, see, taste, or touch things inspired by their favorite artist, they want to be there," she says.

According to Taylor, the popularity of her events can be attributed to the way art allows us to view a celebrity from someone else's perspective. "It's giving us the opportunity to peel back another layer of the artist's persona, which ultimately makes us connect with them more."

Views exhibit won't be Taylor's last, and she tells us she already has big plans for her next showcase. (Rihanna, perhaps?) We spoke to some of the featured artists ahead of the show to find out why they love Drake and the role art plays in our culture.

Click through to read their responses, and be sure to grab your tickets before October 10.

Title of work: Views from Yo HeART

He writes music that touches people. Some people call his music emotional, but I think he writes from his heart.

Art is the visual to the storytelling of these celebrities. I feel the same way about the role of music.

The way they affect the culture, the change they bring, and the hearts they've touched.

Yeah, he is. He created a sound that a lot of artists use in their music now.

I think it's because he's the first rapper who isn't hood to somehow get the whole hood behind him. He's not a "tough guy," and yet tough guys love him. After crossing that bridge, he even took down Meek Mill, who really is that tough guy. He was the underdog and now he's on top. People always love the underdog because it makes for a good story.

I used to feel like art got lost in our culture obsessed with celebrity. Anytime I told someone I was an artist, they'd think I was a rapper or singer. Even as a painter, people would rush to graphic design or graffiti. I'm like, "No, I'm an oil painter." It's almost as if the craft is lost. Now, I feel like art is coming back, but because our culture is so obsessed they turn the artists into celebrities themselves. I don't know if it's a good or bad thing, but sometimes the focus turns away from the art and puts it on the person creating it. In the end, only your art that will keep you there.

Being able to make it being authentic and not bowing down to what's considered "trendy" or "in." When you can comfortably make it to the top being authentic to who you are, you become an icon.

Yes and no. In the music industry, yes, because he's broken barriers that have never been broken. He's come up with his own style of music that mixes '00s rap sounds with '90s R&B vibes, and now you see a lot of people coming out giving off that same feel. (Bryson Tiller, PARTYNEXTDOOR, The Weeknd.) Overall, I think he still has room to grow before he becomes a true icon. It comes with a certain amount of confidence to where you don't have to answer to anyone, rumors or naysayers. Beyoncé doesn't comment on what people say on the blogs, you don't see her having beef. She's her own brand and has nothing to lose because she has it all. Being an icon comes when you break out of your safety zone and become bigger than yourself, but Drake's not there yet.

When Drake first came on the scene, he created his own sound, and his style of music was so different from what everyone else was doing at the time. He made music that connected to the emotions that everyone feels but never talk about, which made him relatable to the masses. He wasn't pretending to be someone he's not, and I think that also helped stem a deeper connection between his music and the audience.

What role does art play in our cultural obsession with celebrities?

To be honest, I'm really not sure what makes someone an icon today; if I knew, I would be an icon. Iconic can be best described as someone who has surpassed everyone in a particular skill or field, someone who does so with class and sophistication.

Drake is absolutely iconic, and at this point, it doesn't matter what he produces musically. He's reached icon status, so in the eyes of most he can do no wrong.

Drake is having a moment because he's putting something on the table a lot of rappers aren't anymore. He shows emotion and he's not always trying to be hardcore and aggressive like rappers in the past have portrayed themselves as. Because of this, he speaks to a larger crowd, is more relatable, and is more versatile as an artist.

Art allows us to show our appreciation for celebrities in a way that is different. It's a way to express love for their talent through our own talent as artists. It takes hours on hours of work to make a piece of artwork, and I think celebrities feel really flattered when they see that a fan is willing to do that for them. Also, with social media as a platform now, it's exciting to think that celebrities can view the artwork more easily.

Fearlessness. Not being afraid to be different. Taking risks. Stepping outside of the box and doing your own thing.

For sure. He's not only a rapper but also a singer, and on top of that, he was originally an actor. Drake is a multifaceted performer, and I think that's exactly what put him ahead of the game and gave him the huge name he has today. His impact in the music industry is enormous so far, and he's just getting started.

I don't necessarily believe Drake is having a moment because that would mean we're not acknowledging what he's done in the past as an artist. I have very high praise when it comes to Drake, everything he has ever put out was gold in my opinion. He has so many styles from singing and rapping, and now he's even added reggae and soca to his arsenal of sounds. Which is great because his hometown has a lot of Caribbean influences. He's great at staying relevant and using different sounds to reinvent himself.

What role does art play in our cultural obsession with celebrities?

I believe that art is a great medium to show other people how you see certain things. It all comes down to perspective. Certain things hit people differently, so, in essence, we could be listening to the same song, but it could hit me totally different from the next person hearing it. There's no way of expressing that besides art. Therefore, it's sort of like art admiring art.

To be an icon, it takes longevity, consistency, and delivery. All of these are key components to building an empire. Drake has been at the top of the game for almost a decade now.

With that said, Drake is definitely an icon. Music fans all over the world salivate when they see Drake has new content out. His music is very influential as well—you can tell by how many captions on social media you see from his lyrics the day after he drops a song. But seriously, he just might be one the greatest musicians of our lifetime.