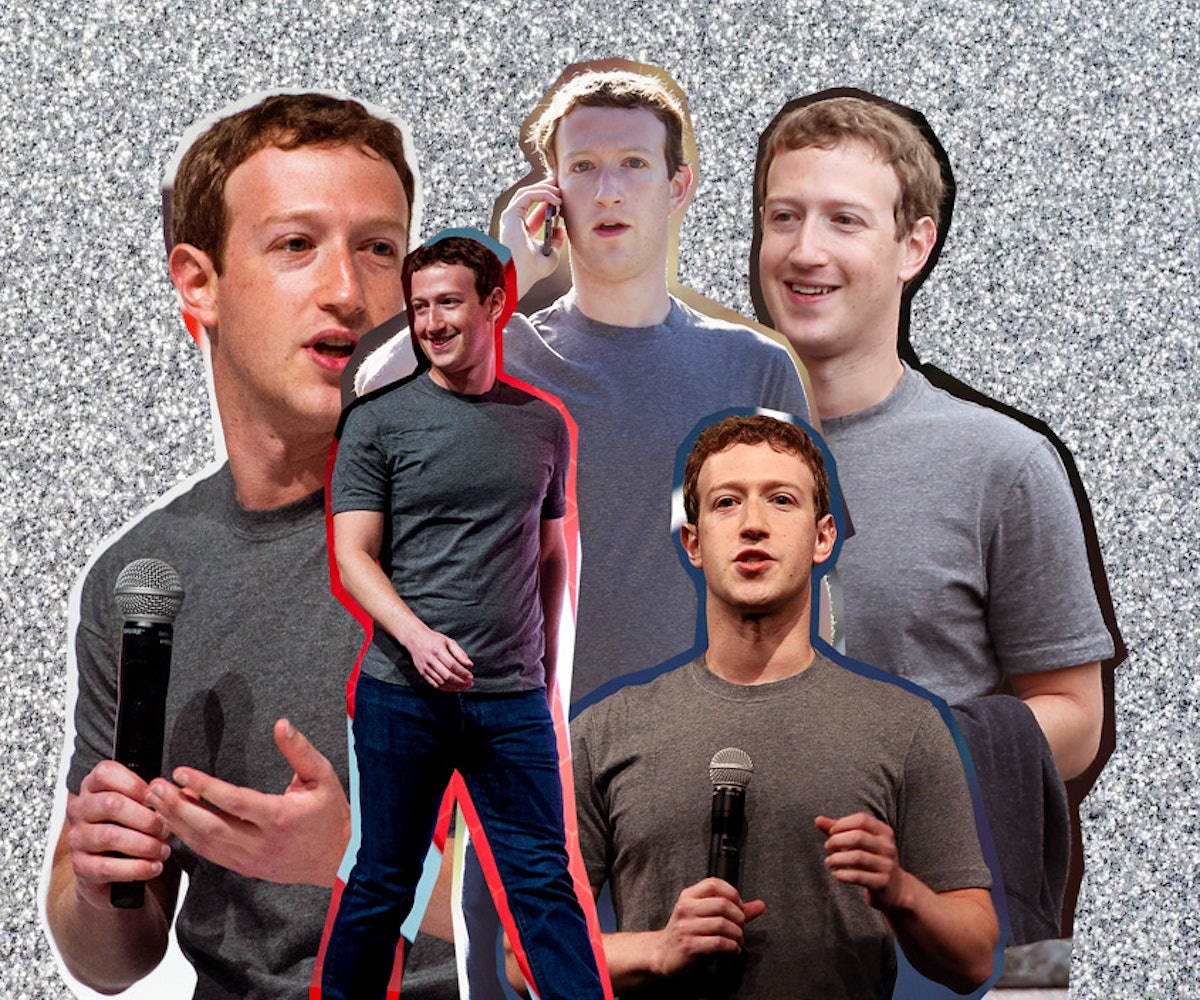 When Mark Zuckerberg sat for his Annie Leibovitz closeup on the cover of Vanity Fair, he rocked his preferred uniform for saving the world: jeans and a grey T-shirt. His freckly pallor washed out in the yellow light framed his inscrutable not-smile, as beguiling and freaky as a Flemish Altarpiece. But that laser-like blue steel eye contact makes you feel like you’re looking straight into Zuck’s soul, as though it didn’t even matter what he was wearing, or that it was a comfy grey T-shirt, or his $35.7 billion net worth, or the fact that he’s married. For Zuck, all that external stuff is just noise and distraction from a job at hand. He's on Vanity Fair’s “New Establishment King” list, leading the Disrupters category, in which six of the top five are men.

When I heard about Mark Zuckerberg's daily grey T-shirt uniform, I wanted in. I’ve never been one for uniforms, but I wanted to be enveloped in a security blanket of plush jersey, like a walking Downy ad—all day, every day. I know some women harness their raw, corporate power with five-inch pumps and red lipstick, but personally, I never feel more badass than when I dress like tech support.

As The Cut noted, Zuck came off "kind of sexist" when he disdained investing literally any energy on "silly [and] frivolous" things like one's professional appearance, distracting him from his quest to "help serve" a billion people. How quaint not having to consider how you present to the world, not having to concern oneself with fat-shaming or slut-shaming (or not-slutty-enough shaming) in the workplace. I, too, want to transcend the worldly and concentrate on my very important work at hand. The wardrobe of the serious and lazy, that’s for me. I’ve always resisted wearing what I was supposed to, either consciously or through self-sabotage, so my single-minded interest in replicating Zuck’s strict greyscale loungewear-in-the-workplace dress code surprised me. Was this a rule I could follow? I set to cutting the bullshit out of picking out clothes every day and caring whether my coworkers thought I’d done laundry this month. I was buckling down.

I already owned a drawer full of black skinny jeans that could, in a certain light, pass as business casual. But rounding out Zuck’s code, as translated onto the female body, comes with some additional complexities. There is an uncanny valley between tight and baggy tees: Too-clingy ones show more form than I’d prefer on any given bloated Tuesday, and any tee billowy enought to hide my boobs proved to be an unwieldy tent of fabric. Would Zuck be a comfy T-shirt-bra kind of girl, or would he avoid those attention-grabbing visible nipples at the office with a padded number? Or free boob? Already, I was spending more time thinking about clothes than Zuck, even while implementing his zero-time-wasted prêt-à-porter closet. None of this threatened my desire to be hugged with warm heather on the job, the susurrus of gauzy cotton affirming quietly, "You're a lion; take what's yours.” When I’m perched to save the world, surely this is how I’ll look while doing it.

There are some different grey tees out there, so I set out to optimize, like any good nerd. I ordered a variety of naps, fiber blends, and fits, and pared them down methodically: Pills too fast, rides up in the back, not "huggy" enough, obviously made in a sweatshop. There were a few brands of basic tees, and the different styles were inconsistently labeled online. It wasn’t a consumer-friendly experience, since I was buying the fashion equivalent of No. 2 commodity corn. But basically, they all looked amazing. And under a crisp blazer at a formal meeting, they were invisible. Only I knew my heathery secret, like magic, religious underwear.

Appearance-as-personal-brand is a popular theme in women's business self-help, exhorting us to pick a signature color or staple so that we’ll be remembered for anything, at all. If you’re hoping to make a splash with your managerial style, the logic goes, be memorable with chunky jewelry! For sure, don’t waste your splash on looking like you can’t play nice with other people’s sartorial rules. You want to cultivate those warm, fuzzy subconscious associations imprinted with the image of jewel-toned sweaters or a bold blazer: friendliness, attractiveness, competence, smells amazing, never cries at her desk. I once had a business meeting with a woman politician who was wearing solid fuchsia wool tunic. There was no sliver of uncertainty who was in charge in that room. I’ve never forgotten.

Of course, there’s no way to know if all this advice is imperious pap, distracting us from focusing on making actual stuff, like all the amazing things we could invent in a basement, or if the friendly workplace fashion advice mostly offers an appealing illusion of power, an alternative to the usual (inevitable?) scrutiny of women’s work performance, no matter what they wore to work.

We might push back against the personal-brand fashion advisers—I am not just my appearance! But marketing cynics say we're all brands in the end. If it worked for Zuck and Steve Jobs, why not everybody else? While they may not be known first and foremost for their shirts, perhaps that’s women’s best hope? Better to lead with a collection of bold cuff bracelets, at least until patriarchy is fully dismantled? For whatever reasons, the Zuck/Jobs utilitarian uniform is never given as a possible answer to the evergreen conundrum of what to wear. The problem can be even more complicated for butch-presenting women, whose appearance isn’t organized to please men or set people at ease. Many people experience a very real need for their clothes to hide them in plain sight from a homophobic or transphobic workplace (it’s still legal to fire someone for being gay in 28 states and in 29 states for gender expression). Much as I resent the fashion rules that keep me itchy and hobbled in critical client meetings (how much better would I perform in a grey T-shirt?), I get plenty of mileage from my cis-femme privilege—though mine is more “mole people femme,” to borrow a term. The wardrobe-as-personal-branding advice works best when you have a healthy clothing budget and your own personal style happens to be neat, pretty, and "impeccably groomed.”

But what if your innate, true-blue signature style is best captured by a utilitarian, 50 percent grey T-shirt? Of course, we all wear uniforms. Or at least outfits that won't get us fired. They say to dress for the job you want. Could my brand afford to adopt a billionaire's uniform of all gray T-shirts? More importantly, could I afford not to?

Finally, a no-nonsense woman higher-up started talking publicly about maintaining one, single daily uniform, though it's much prettier than mine (and less forgiving of pizza stains). Zuck's own Cheryl Sandberg tells women to wear whatever we feel like during our rapid ascents to bossdom. Zuck, however, has no boss to answer to. And Cheryl Sandberg's sleek and expensive wardrobe is still the topic of ongoing comment. Is lack of dress code the perk of getting to the top, or a symptom of the IDGAF genius that it takes to earn a billion dollars? Either way, sign me up.

I’m not sure what I expected when I went all-in. For sure, I spent less time worrying about clothes, though initially I spent more time worrying whether my coworkers would think I was sleeping in the office. I waited for commentary (in a design office, there’s no shortage of opinions). Instead, there was silence. Nobody cared. Maybe I’d been invisible before, and now I was still invisible. Maybe the main change was inside, rather than out. I didn’t need anyone to tell me what I already knew in my cocoon of cottony goodness: I felt like a billion bucks.