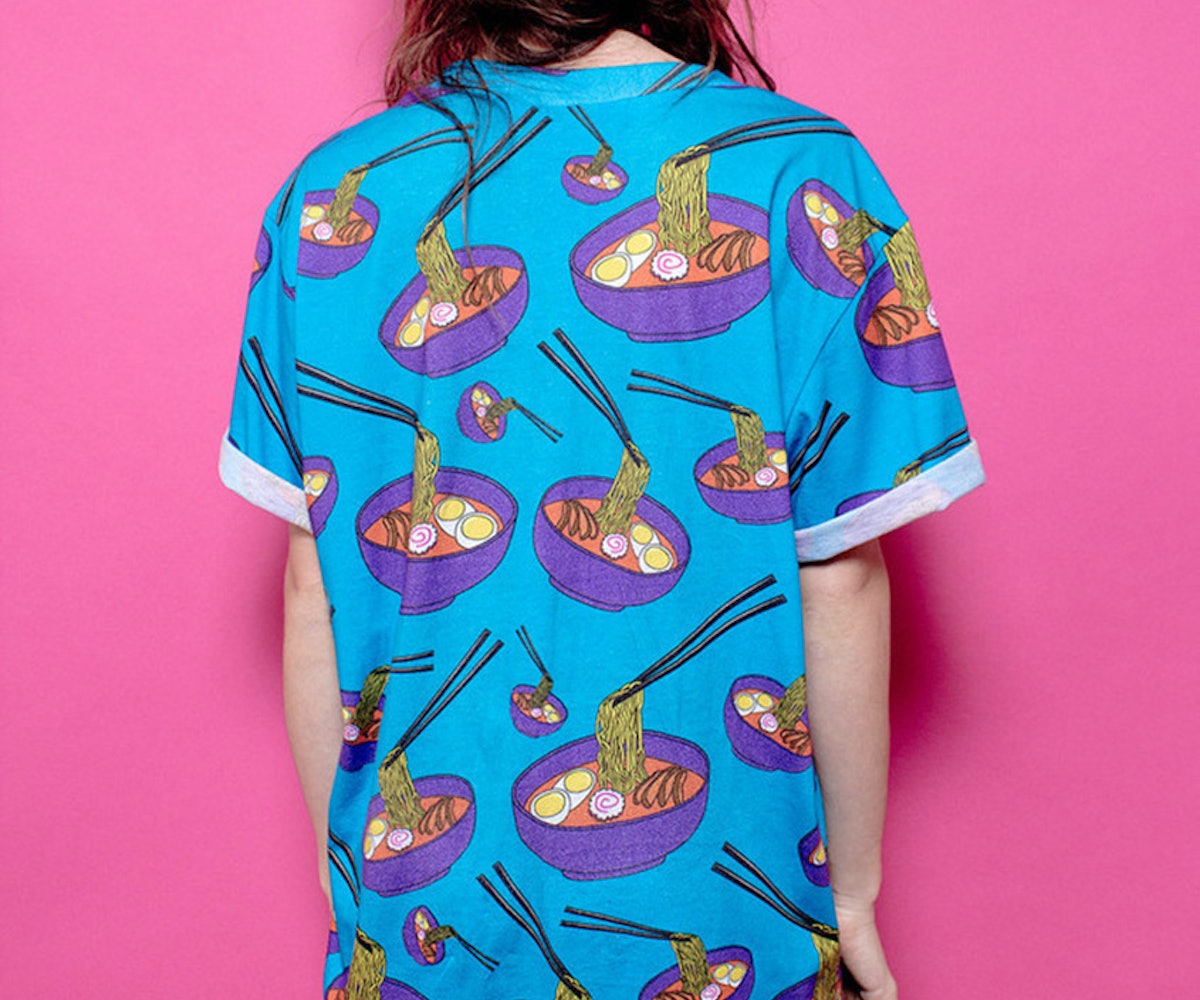 I'm a huge soup fan--even in the summer. I pick up a cup for lunch almost every single day around our offices in SoHo. Even better than soup though, is ramen. There's just something about the combo of a steaming hot amazing broth, mixed with your favorite toppings and the perfectly cooked noodle to make for the ultimate dish.

That's why I've listed some of NYLON's favorite ramen spots around the US below, and will be scooping up this tee by Neon Aeon to wear on my own ramen-ventures--you should, too!

Let's face it, there are so many good Ramen spots in NYC, that it really is difficult to choose just one. But, our hats have to go off to Ivan Ramen. With two NYC locations and another in Tokyo, plus a book detailing owner Ivan Orkin's obsession with the dish, it's safe to say that Ivan Ramen's Vegetarian Shoyu Ramen, and anything fully loaded (includes egg, xtra chashu, roasted tomato, and chicken or pork belly) are worth trying. P.S. You should follow Orkin on Instagram, because his handle is @ramenjunkie (Why didn't we think of that?!).

With a name like Ramen Underground, you might expect to catch some DIY shows while you slurp up your noodles at this Kearny Street spot. But, instead, you can expect to mix and match enough toppings to create your very own style of ramen. We can't promise the restaurant will name a bowl after you, but we can promise that spending just eight bucks on a classic bowl (and adding goodies like kimchi, corn, BBQ pork, and boiled egg for just one dollar each) will make for one seriously delish dish.

Whether you go downtown to Little Tokyo, or head over to the Westside's Sawtelle District, you've got to stop into Daikokuya. In terms of specialty menu items, the spot's ever-popular Daikoku Ramen bowl comes with a top secret soup base, chijire egg noodles, kurobuta pork belly chashu, and marinated boiled egg (so yum)--but the Spicy Miso Ramen made with three different kinds of miso is also worth trying. Oh, and if you think the insanely good eatery should open a new location somewhere else, you're in luck--because it's got a poll asking just that on its website.

All you really need to know about this Izakaya, is that it comes with a major selection of craft beers on tap that you can't get anywhere else (think Hitachino Nest Espresso Stout, Kirin Ichiban pale lager, and Mayday Brewery's Evil Octopus black ale--just to name a few). Trust us when we say that these draught brews pair really well with the Eastland Avenue spot's menu items like the Yasai Shoyu, which comes with burnt corn mixed in...say what?!

Sometimes the best spots in a city are only known by locals--especially when the location's ramen specials only happen once a week. That's why we're seriously into Sweet Cheeks in Fenway. Even though the latenight Monday evening ramen party isn't around during the summer, you should be prepping your taste buds for its return in the fall. Much like the BBQ restaurant's semi-on-the-DL special, the upcoming fall ramen menu hasn't yet been released. However, seeing as last winter's came with the joint's own spin on the classic Tonkotsu, you should definitely be looking ahead.

Any restaurant that's been established by two chefs who met while they were once DJs spinning hip-hop records is one we're down to try. Tatsu-Ya Ramen (founded by Tatsu Aikawa and Takuya Matsumoto) fits that bill, and more. We're talking about menu items like the "Ol' Skool" traditional Tokyo-style Shoyu ramen and the venue's own seven rules of ramen--including "Chopsticks only" and "Never Share Your Ramen." Yeah, we can definitely agree with the latter.

Have a different favorite spot for ramen? Tell us in the comments below where you like to go nosh on the best noodle bowls!

NEXT UP
Life
Away’s Second Designer Collection Will Have You Traveling In Style
Life
On Repeat: Vaquera’s Away Collaboration Is Brought To You By Britney Spears B-Sides
Life
On The List (With Melissa Rich): The Highs & Lows Of Solo Partying
Fashion
The 13 Buzziest Moments from Paris Fashion Week