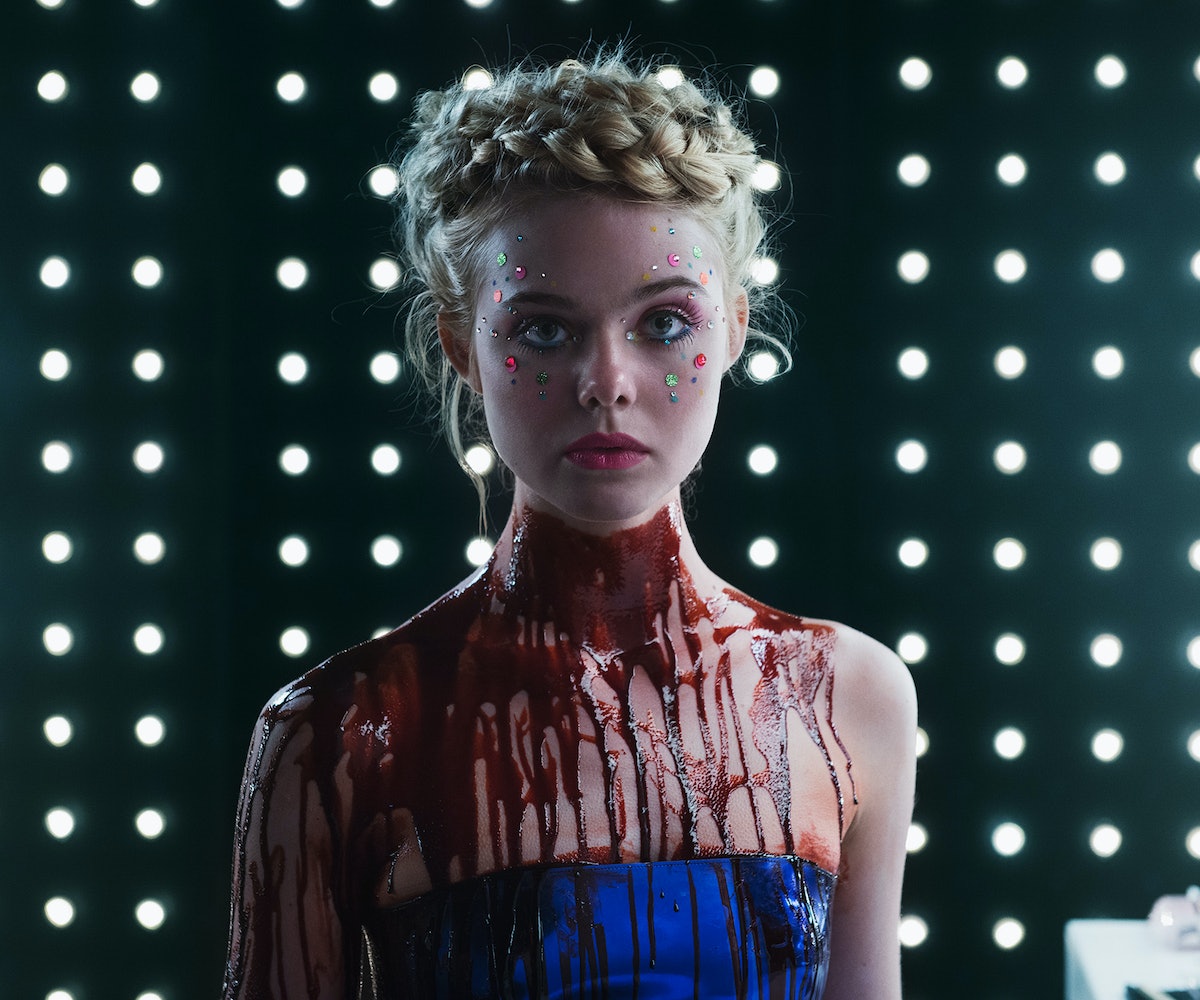 Fame and notoriety have always been attractive. And in the current era, where commercialism, tabloid journalism, and social media thrive, it's arguably a more powerful force than ever. In her new film The Neon Demon, Elle Fanning plays Jesse, a 16-year-old who moves to L.A. and takes up residence in a run-down Pasadena motel while making a steep rise to the top of the modeling industry. But, as with any Nicolas Winding Refn film, not everything is as it appears to be.

The psychological thriller, which hits theaters tomorrow, explores the manipulating powers of beauty and the dangerous lengths to which people will go to get "it." As the visually stunning film progresses, reality becomes distorted, and supernatural-esque human desires take hold. While its noir tendencies and outlandish ending may give the essence of that of another dimension, its themes are very much relevant—and present—in this world. Ahead, Fanning dissects the meaning of it all.

Who is the neon demon?

Nic [Winding Refn] and I were trying to figure that out during filming. The way he shoots is in chronological order—which I’ve never done before—is so helpful with this character. We got to the runway show, when my character gets to close the show, and that’s where she transforms. We shot that in two days, and it felt weirdly like a music video because Nic played music during filming. There’s also no dialogue. It’s like a free fall; you can kind of do whatever you want. In those two days, Nic and I looked at each other and realized, "Jesse is the Neon Demon." Before, I thought the demon might have been L.A. itself, but it goes further than that. It’s like a disease that infects you when you’re a beauty-obsessed person. You can say, "Is this negative or positive?" but I think it’s ultimate narcissism.

What does the film say about narcissism?

Our society has told us that it’s not something good to fall into, but my social media generation is constantly looking at selfies of ourselves. Our movie is embracing narcissism and looking at it like a virtue. Narcissism is a very uncomfortable subject that’s looked at negatively. It’s a taboo, especially for my parents’ generation—they don’t speak of it. With my generation, we’re accepting of it, which is the horror element. What are we going to turn into? Eat each other? I hope not.

It’s interesting; the more Jesse falls into her own narcissism and accepts her beauty, the more danger is attracted to her.

She gains this power, but the people around her are also very seduced by it and want it. In a way, it can also be a cautionary tale. We looked at it as Dorothy coming to Oz, if Dorothy turned evil.

The addition of Keanu Reeves' Hank and Desmond Harrington's Jack adds an element of young women being vulnerable or unsafe around men. What is the film trying to say about these traditional gender differences?

The men in the movie all represent very specific types of people or men in society. Keanu’s character is the predator. At first, Jesse is looked at as [a symbol of] virginity. In one of the scenes with Keanu, it acknowledges being afraid of penetration. Then, the photographer [Jack] is controlled by the women, because we’re allowing him to have the power—but if we didn’t want him to have the power, we could take it away. I love that about the film; we have a role reversal. My boyfriend in the movie, [played by] Karl [Glusman] is moral and he says everything that’s right, but he’s also a hypocrite. In the end, you realize if she wasn’t beautiful, he wouldn’t have looked at her. I love that we reversed it so he’s like the “needy girlfriend” in other films, which girls are just not like.

What was it like to be on set with a predominantly female cast and crew?

Being with all of these women on set is very unusual. Our director of cinematography is Natasha Braier. It was amazing. At first, when you hear that Nic Refn is doing a fashion movie with a teenage girl as the lead, you’re stunned. He’s the king of masculinity. I wanted to do it right away. Then I met him, and he’s surrounded by feminine forces at home—when I met him for the first time, princess clothes were everywhere and [Frozen's] “Let It Go” was playing)—so I understood.

How would you characterize Jesse?

She’s hard to put into a box. I see her as more of a creature or vampire. She comes to the city alone, and you don’t hear much about her past or her parents. She has the youth, the aura—that thing that’s like a magnet and pulls people in. She starts to fall in love with herself even more and realize that power. We see the darker side of it, but it can be a beautiful thing, too.

The first time I met Nic, he asked me, “Do you think you’re beautiful?” It was so uncomfortable. If you say yes, you seem like a narcissist. Then again, people should think that they’re beautiful and they should love themselves. There’s a double standard to it, and that was what interested me in the story.

Do you relate to Jesse in any way?

I do, in some ways. I can relate to her in that I’m from Georgia, where we made her from, as well. I understand being overwhelmed when you first go to L.A. I also know the feeling of being the youngest person in a room because I started acting when I was very young and was surrounded by adults a lot. [The film] isn’t really about fashion; it's just a pretty backdrop. The industry is mainly about the way you look, and I’ve done a lot of photo shoots so I understand that world. Anything further than that, no.

In your upcoming film How to Talk to Girls at Parties, you play an alien. What attracts you to these otherworldly characters?

I love playing pretend, so getting to play an alien or a beauty-obsessed model—characters that are so unlike me—is very attractive. I get to play characters where you can add details or quirks; I find it very juicy. I like to live in different universes, too. It’s a different section in your brain that you can go to. I daydream a lot, so I like having my imagination become a reality on film.