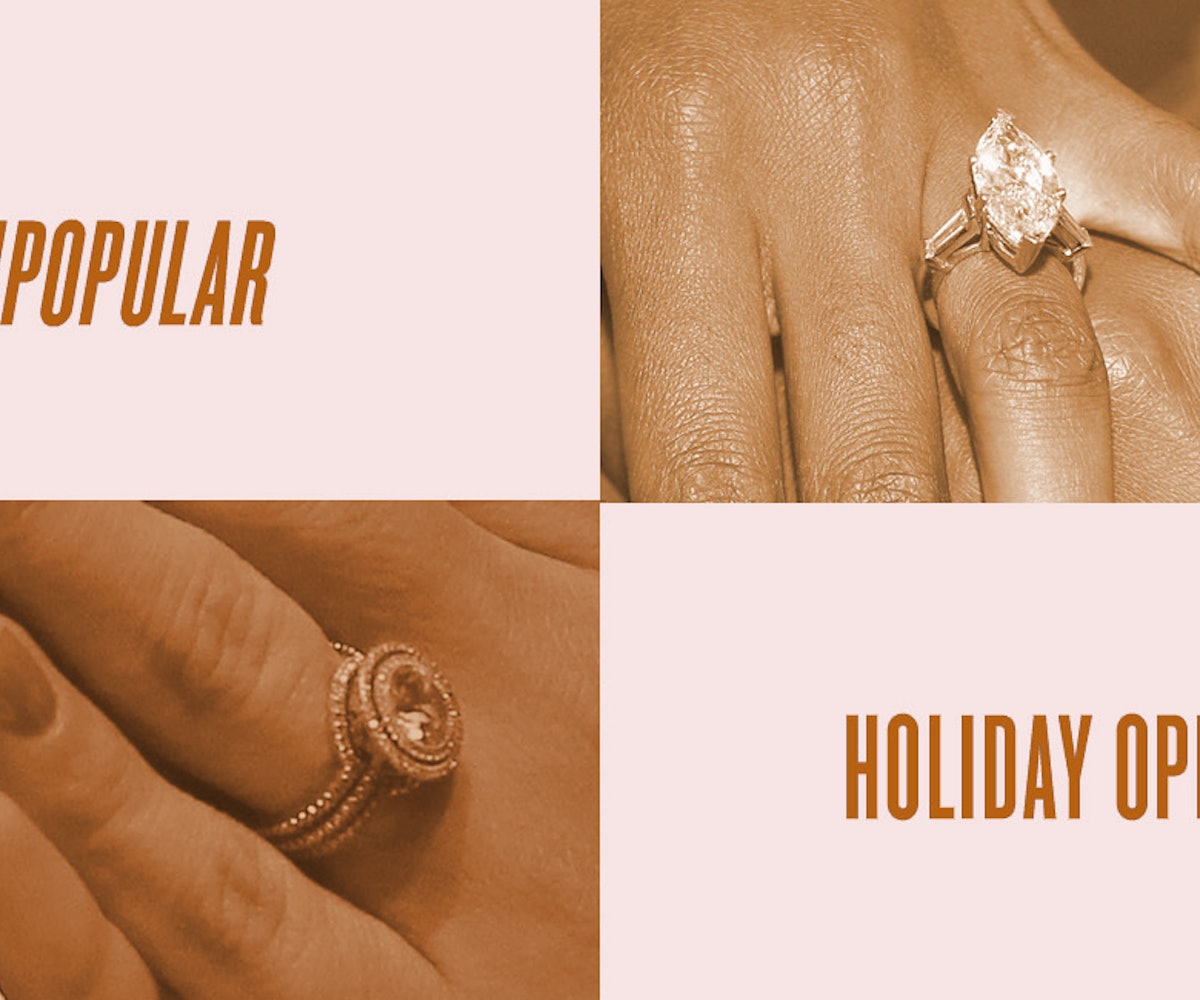 Four of my friends got engaged this past year. Not acquaintances or old classmates I only communicate with via likes on Instagram, but actual friends. Like, these are friends with whom I get monthly dinners and text more than once in a blue moon. The kind of friends who will for sure invite me to their weddings. In fact, I’m a bridesmaid in two of them, which are within the same year of each other. Love is in the air… and I am this girl in the bottom left corner.

From my understanding, “engagement season” takes place between Thanksgiving and Valentine’s Day, with an emphasis on Christmas and New Year’s Eve. (Probably not so much on New Year's Day, as I doubt anyone wants the happy occasion sullied by a hangover and work the following day.) The statistics back up that this isn't just anecdotally a thing: More than 30 percent of proposals reportedly happen around this time. And chances are, in two weeks time, you’ll know someone whose jingle bells turned into wedding bells over the break.

The holidays do present the perfect time to pop the question: All your family members are gathered in one place so you can share in the joy together. It gives you more time to plan your big day if you want it to coincide with “wedding season.” Plus, it’s kind of a great gift, coming in second only to a puppy.

Or, maybe it's not the perfect time. Maybe that's just capitalism trying to make us believe it’s the perfect time? Because this is also the time of year when we’re bombarded with commercials for jewelry; no holiday marketing is complete without a kiss from Kay.

And, also, maybe this is just the weather at work: There’s a reason the winter is also known as cuffing season, and that's because it's cold out there. The frosty weather lends itself well to having someone to cozy up next to, while the holidays provide an illusion of euphoric, twinkling bliss. It’s easy to get caught up in the magic of it all and find yourself on one knee in front of a tree. It’s easy to make a holiday meant to be about giving back all about you.

No, I’m not bitter. We, singles, outnumber the married, after all, and there's comfort in numbers. But the holidays are just hard for the unwed. Those who are single have to field questions about their relationship status and “whether there are any nice boys in Brooklyn.” Those in a relationship have to deal with nosy family members probing about their future. The only people who are truly safe are those already married, while the rest of us are doomed to question the meaning of our lives until the next family get-together.

So, here’s an idea, let’s take the pressure off, well, everyone and move “engagement season” to literally any other time of the year. I hear summer proposals may be creeping up on winter ones. Let’s make that happen! The beach provides a much better backdrop for those engagement pictures, anyway. And, the diamond will likely be cheaper to purchase since you won’t be dealing with inflated holiday prices. Not to mention, it’s much easier to muster up happiness for someone else in the summertime.

Given the number of rocks I’ve already come across, this message might be coming in a little late, so, if you find yourself alone when yet another well-manicured hand and princess cut ring shows up on the top of your Facebook feed—despite your past attempts to hide them—just remember that engagement season won’t last forever. It will, eventually, turn into "we’re having a baby" season, which will at least produce something adorable for you to squeal over.