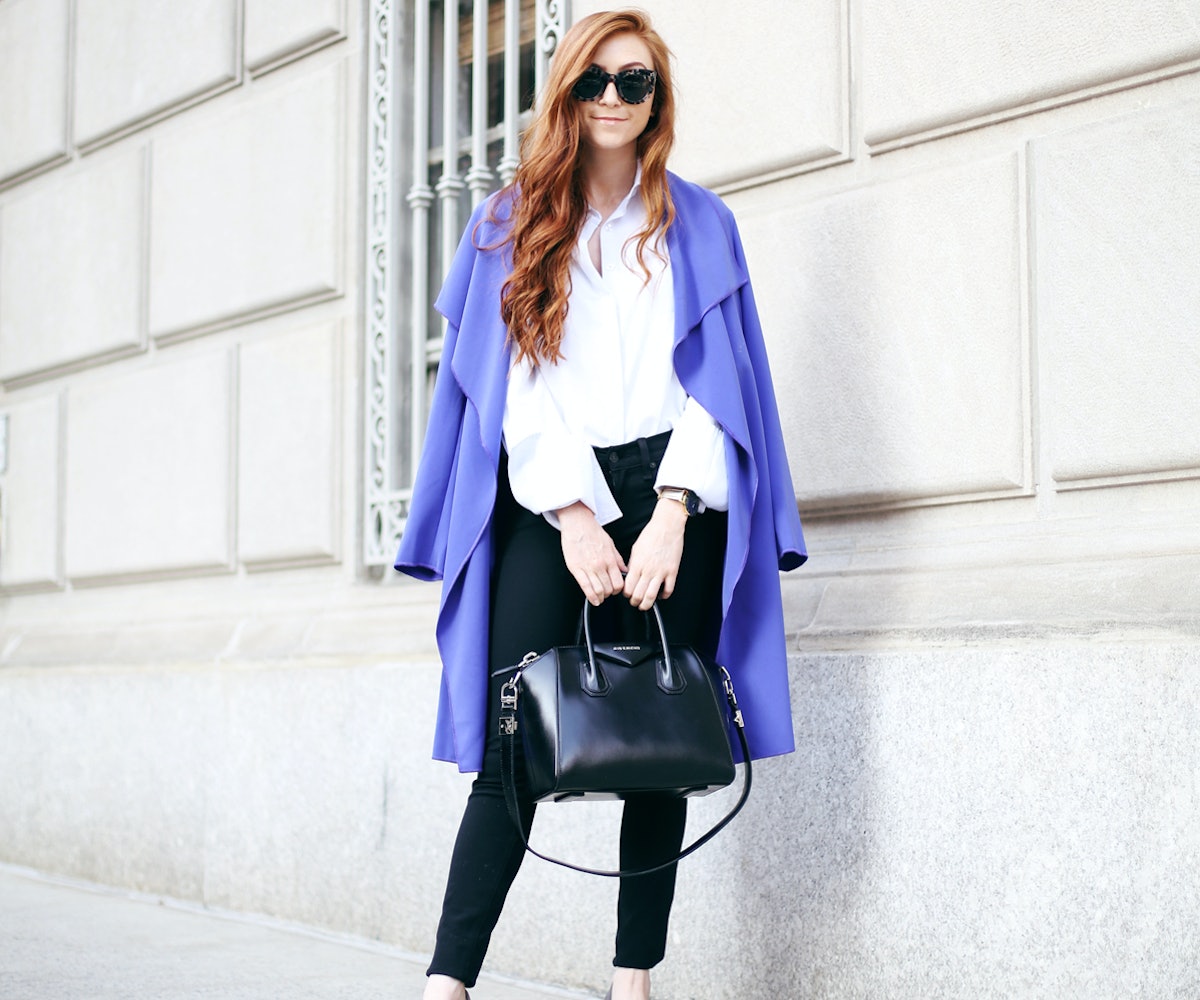 Picture this: You’re scrolling through Instagram, and you come across a photo of a fabulously dressed girl wearing a coat you’ve been eyeing. You click on her profile to discover that she is a full-time personal blogger and you think to yourself, “Wait, how does that work, and why isn't that my job?”

The blogger in question is 25-year-old Erika Fox, the girl behind the blog Retro Flame. Originally from Kerry, Ireland, Fox moved to New York a little over two years ago after spending summers in the city interning for companies such as Whitney Eve and Refinery29.

This past year, Fox has gone full-time with her blog and has expanded her site, her social media presence, and even brought on a new member of the Retro Flame team, her sister Kailen. Below, we asked Fox some of our burning questions about the day-to-day life of a blogger from how she plans her social media posts to her goals for the upcoming year to her favorite coffee place in her neighborhood.

On how her blog has changed over time

Retro Flame, back in the day, started as just a fashion blog. But I think as I grew up a bit and moved away, it became more lifestyle. So it's not just outfits anymore, it's life. And it wasn't like I sat down and made this a strategy, it just happened organically. When I started my blog, I was 19, and now I'm 25, so I think as I've grown, my blog has grown with me. I've moved countries, and I've moved apartments—it just creates content without even thinking. And for me this year, the most popular of all my content was the interior stuff—who knew?! People went crazy for them, and I still have loads more to post. I've never had a category before where people asked me when it's going to be up. With fashion posts, people don't ask you, "Okay, when is this outfit going to be on your blog?" But with interiors, it's like, "Hey when are you doing the bedroom showing?"

YouTube, hands down—I think people go into it, and they're like, "Yeah, okay, get a camera, start talking." There is so much more—there are the lights, getting the equipment, tripods, speakers, and then you have the editing. There's so much involved. But I have to say, though, it's really rewarding. When you get your video published—that feeling is great. It’s a lot of work, but I'm seeing a good response so far, which is nice.

It's very day by day. At this point, I try to literally vlog every single day. My main aim for it was to just get into Youtube, get into the swing of things, and just kind of start getting used to it and comfortable. The year went so fast—I didn't do as much as I wanted to do, so I was like, “You know what? One more month left [of the year], I'm going to vlog every day just to practice and get better.” So it's very me, very real. Literally what I'm doing every day. I love watching vloggers—it's part of my routine, and I think it's the same for other people as well. So it’s a chance for people to get to know me better during December.

I always try to vary it, so if I'm putting up an interiors post, the next post is fashion, and the next one is New York. I love Instagram but forget to do the stories because that's what Snapchat is. Snapchat's just easy—that's where you get real. I even noticed some bloggers, they're different on Instagram Stories than they are on Snapchat. Like, "That's not how you are on Snapchat, go back to yourself again." Snapchat's definitely easier and quickest, but for example, during Vlogmas, it's tricky cause usually Snapchat is my daily Vlog. But now that I'm doing daily videos, I'm trying to make the content on Snapchat on Youtube different. I probably would've never looked into Youtube if it weren't for doing Snapchat first. I think by being on Snapchat, and being able to be yourself, people actually see the real you, and I think that they can relate to you more.

This morning I woke up, and I was so tired after a late night editing the vlog. But we had promised a gift guide on Retro Flame [the next day], so I jumped straight into that. Then I also have to Instagram and then I also had a picture due for a brand I was working with, and I was like, “Oh my god where do I even start?” But I feel like everyone goes through that, not only in blogging but in every job. I always think like if you're not panicked and overwhelmed, you're not doing it right. I've always had a good work ethic, but ever since I moved to New York, it's just doubled, because it has to. Everyone is so enthusiastic and motivated here that, like, if you're not it's get left behind.

I think when I went full-time with my blog, I think people were like, "How is she making a living? Are her parents just like giving her money?" I didn't quit my job until I had enough savings to get me through the next year. Like, I'm not stupid, I live in Manhattan. You have to always have a backup. I think people have that misconception, and I think they don't understand, and I think that's a misconception—that we get it easy. The other misconception is that we don't work basically. I think people genuinely think we just swan around events and get free stuff. That's obviously amazing, and there are so many fun parts of blogging, but honestly, at the moment, Monday through Friday, I am four days at my desk and one day I’m at meetings and events. That's the ratio at the moment. For Vlogmas, I'm going to make an effort to do more stuff than that. People can be very judgemental. But it is what it is. I'm lucky at Retro Flame because I actually have really supportive followers.

Favorite spots on the Upper East Side?

Maison Kayser—they have really good chocolate almond croissants. I also like Nespresso on Madison Avenue. Nespresso is my favorite coffee, so I kind of go there for a treat every now and then. I love just grabbing a coffee and going to the park. And also Le Pain Quotidien, Emack and Bolio’s, Candle Cafe, and Taqueria. When I get out of my neighborhood, I love to escape to Dumbo in Brooklyn. There's such cute little places, and the view is amazing.

That I didn't hire somebody earlier! I felt like I could do it all myself for so long, and, in theory, yes I could do it but you can do more if you have help, and I didn't realize that in a way. And it's been lovely to have Kailen help bring new content to the site, and she's into beauty—she used to be a makeup artist for M.A.C, so she's really knowledgeable on all of that stuff. It's nice having kind of another pair of eyes on things, and she also helps me with emails and all the admin stuff too.

[At the end of] every year, I do a recap post. At the beginning of 2016, I did a blog post about my goals for the year and I literally wrote them out in the blog post. A couple of big things definitely got done. I think women are so hard on themselves these days because of social media, and you're seeing what everyone else is doing, and you're seeing their fancy lives. It's easy to belittle your own in comparison, but you have to sit down and be like, "Okay, I've done stuff too." It’s totally fine. Everyone's in a different situation, you know? So yeah, I'm definitely going to do a reflection post. I might even do a video. I can’t believe it’s almost over. Like, this year, I quit my job and I went full-time on Retro Flame, so it’s been kind of a crazy year.

For me, I want to focus more on the Retro Flame brand rather than constantly promoting other brands. And I know we have to make a living, that's obviously how we do it, working with brands through blogging but I think a lot of bloggers forget, you have your own brand as well. You have to take care of that, and I think if you're constantly working with different brands every day and every week, your readers are like, “Enough is enough.” I think keeping that good balance of your own stuff—and obviously, I work with brands that I love and that I’ve worn for years, so those partnerships are absolutely the dream for me—but, I think, shying away from these random one-off things. Readers are smart, they can see through it. They're like, “You're just getting paid to post that.” So I think that's a big lesson I've learned this year as well.

“The harder you work, the luckier you get.” There is definitely luck involved, but it’s the hard work that gets you that luck. Especially here, in New York, there's so much you can do. That's why I moved here, and that's why I don't plan on leaving anytime soon—whatever your crazy idea is, you can do it.