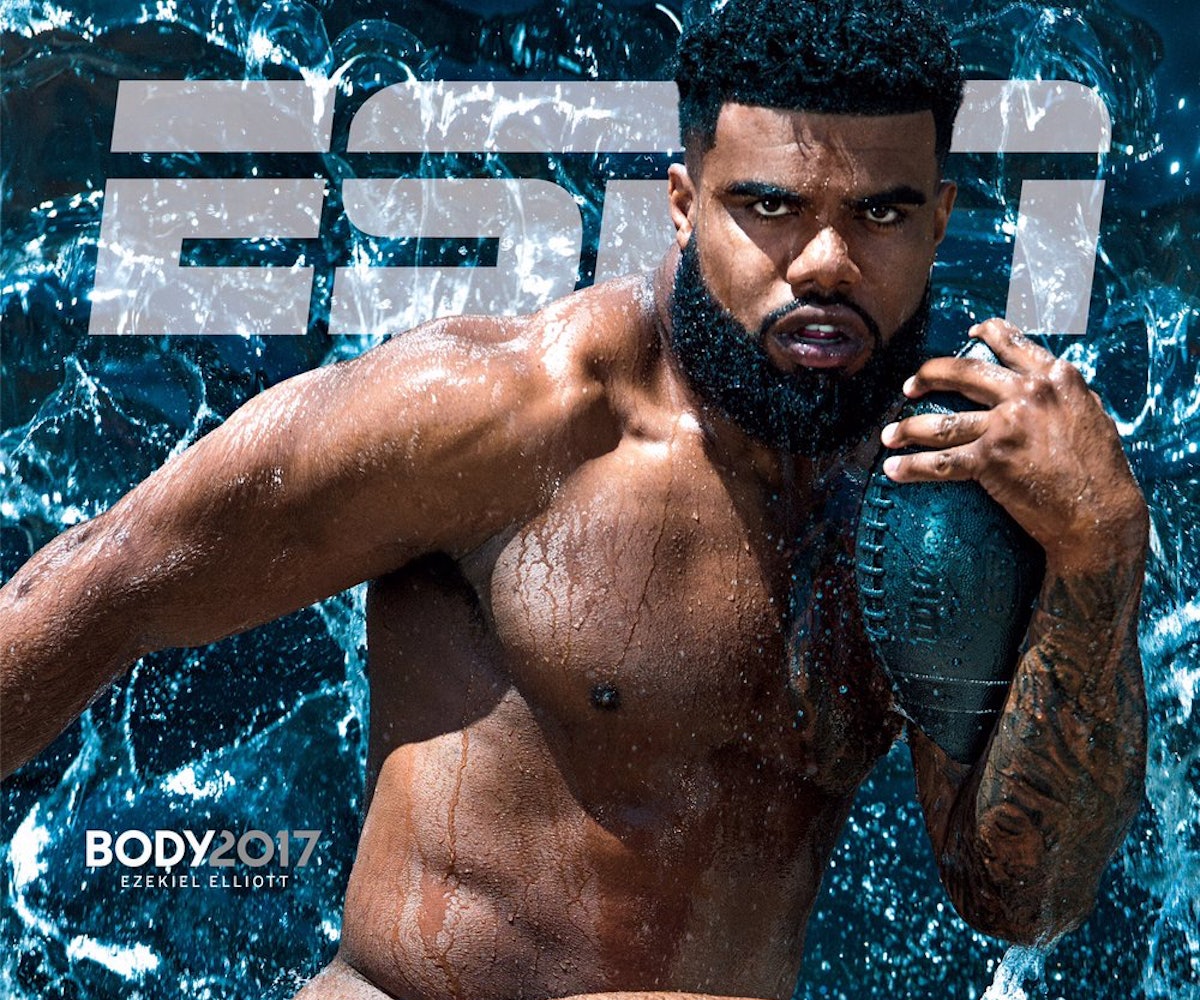 After decades of seeing naked women on the covers of their sports magazines, many fragile dudes were broken upon seeing ESPN's 2017 Body Issue cover star, NFL running back Zeke Elliott. His cover was released in GIF form on the channel's Twitter account, and in it, he's posing nude in water while holding a football.

Despite the release of ESPN's other Body Issue cover, featuring a nude Danish tennis champion Caroline Wozniacki, these sensitive men were only offended by the nude man and had nothing negative to say about the naked woman. Shocker.

"Didn't need to see this before breakfast," one guy tweeted.

"Zeke the goat but I gotta unfollow espn," another guy said. "Videos of ITs ass and now this?"

"Get this off my tl," someone tweeted.

"SPORTS. THE S STRANDS FOR SPORTS NOT STRIPPERS," one guy wrote. I bet this guy isn't saying that to Sports Illustrated every time they feature a nearly nude Kate Upton on their Swimsuit Issue.

Some were more blatantly homophobic, exposing a deep-seated insecurity that simply looking at a naked man might "turn them gay," or that being nude somehow immediately means you're gay.

Now compare these comments to the reactions to Wozniacki's cover.

"I think she's ready for a lot more than Wimbledon..." another creep commented.

Some dude simply wrote, "Would smash," as if Wozniacki would ever actually consider having sex with him.

Someone did point out the stark contrast in comments between the two covers. "Throwback to yesterday when grossed out guys got triggered at the body issue just to come back today and love it," he wrote.

Women are used to seeing female bodies half-naked, or fully nude, on the covers of magazines—from Sports Illustrated to Rolling Stone and Vanity Fair. No one bats an eye when a naked woman is used to sell perfume on the subway either.

"It's only okay to objectify women. We know. We get it," one exhausted woman wrote.

Despite the backlash to his cover, Elliott doesn't seem bothered, maybe because he is an actual man—and not an angry man-child typing under an alias from his mom's basement. He says in the cover video, ″I think my body’s just shown a true transformation from a little kid to a grown man."