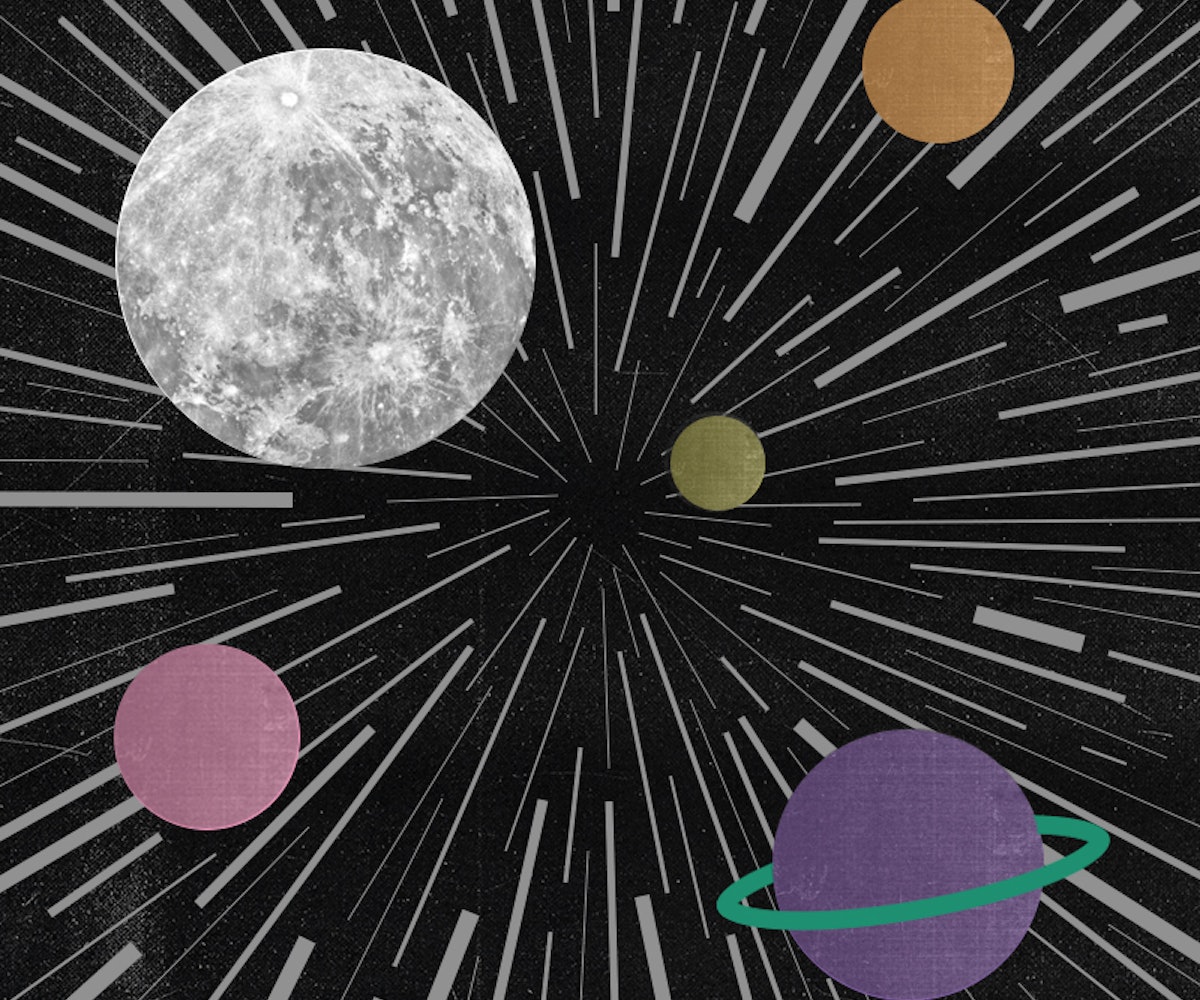 Relationships are practically crying for help as the moon shifts into its darkest phase for the fair air sign Libra between September 30 and October 1, signaling the beginning of a new phase. Autumn is in full swing in the Northern hemisphere, leaving sweet summer lingering in the rear-view mirror. Mercury, who wreaked havoc all September, is travelling direct again, freeing us from its dreaded retrograde shadow. We’re hanging in the balance of the midpoint between the light and dark halves of the year, a seasonal shift that demands maturity and grace—two qualities Libra possesses in spades. Each sign will be called to put into practice the lessons we’ve learned (and relearned over and over again) from Mercury’s latest retrograde hullabaloo during the entire month of October... but especially within this lunation.

The second half of September put many of us (especially Pisces, Cancer, Scorpio, Capricorn, Virgo, Libra, and Taurus) at odds with those we share close quarters with—friends, family, roommates, partners, coworkers, colleagues, and the like. You might’ve already started feeling the collective pull back to regaining your balance in these relationships in the last days of September. Peer mediations and mea culpas are genuine and tremendously persuasive with Libra’s influence on the new moon, calling us to focus on rebalancing (or even reconciling) those essential relationships. Recognizing ourselves as one piece of a collective team is vital to healing any rifts, reminding us that our partners are our teammates rather than the opposition. The Libra new moon bathes these shaken relationships in the light of fairness, establishing a sense of balance and order, ultimately so that we might see the value of our connections.

A major theme of this lunation is peacemaking, especially when it comes to those pesky strained relationships. Learning to make peace by synthesizing even the most stark opposites in our environments and the people around us are key, though compromise won’t be as challenging thanks to the gale of fresh, fun energy revitalizing our interpersonal relationships. A sense of urgency to repair those relationships is what drives us to walk the tightrope line of this delicate balancing act, our end goal being to improve the quality of life with greater peace and harmony—especially when it comes to clear communication.

Air signs like Libra, Aquarius, and Gemini will take to this lunation like a glorious swan gliding on glassy, serene waters. Aries, Leo, and Sagittarius—the fire sign squad—will also have loads of fun with this people-focused moon phase, though these hotheaded signs may have to learn the hard way that honey is more effective than piss and vinegar when it comes to getting what you want (and what makes most sense in your life). Indeed, the Libra new moon mingling with the Libra sun is the perfect alliance for favoring diplomacy and fairness over domineering and belligerent behavior.

Negotiations will go better than expected during this phase as well, particularly for the socially-conscious signs touched by the Libra new moon. Asserting our needs with delicacy in ways that consider others’ feelings is paramount to getting ahead (and staying afloat) for the next two weeks. Our empathy should overpower ego in all our workings involving managing personalities, and we can expect to encounter some level of resistance and rebellion—power struggles, even—thanks to Mars and Pluto being tightly squared up with the new moon and sun.

The balancing energy of the Libra new moon is incredibly powerful—yet quiet and gentle, like Libras themselves—and can act as a neutralizer for even the most tense, argumentative environments. Problems will be easily solved through communication and empathizing with others’ feelings, but in extreme cases where the conflict and opposition intensifies beyond our mental or emotional capacity, the Libra new moon may drive us to take a defensive stance. Finding equilibrium is the basic goal for each sign during this lunation, even if that means leveling the playing field.

At the same time, dreamy, imaginative Neptune will be exactly 150 degrees from the Libra new moon, forming a powerful, sometimes rebellious injunction. These aspects provide the perfect cosmic storm for intellectual uprisings against authority, challenging overall perception of reality. Those involved in advertising, media, politics, and propaganda have a stellar opportunity now to make huge strides, either in their personal drive for success or within a team or campaign. A side effect of watery Neptune’s commingling with the Libra new moon is the danger of pathological lying, scamming, and creating convincing, if misleading, illusions.

The brighter side is that Neptune will be at the same position with the Libra sun, giving personalities touched by this lunation a ferocious desire for stardom and idol status. Our imaginations are on fire with our own social potential and political or professional prowess. Still, there’s a touch of mischief that comes with this delusional aspect that could spark celeb-worthy temper tantrums and fits of diva-like antics. But those who act out or get caught up in the hustle and glow of minor celebrity status will seem so glamorous, flashy, and generally harmless that they’ll be able to escape the scales of justice unscathed and overlooked. Yes, these cosmic aspects have the the potential to make Justin Beibers out of many.

Prophecy and intuition are at an apex during this time, as well, though the messages may be so muted that we risk missing them entirely, thanks to Libra’s quiet, graceful resilience. Water signs—especially Pisces and Scorpio—may feel older and wiser than usual, while others affected by this new moon might feel far ahead of the curve and times. These same folks are likely to feel much more connected to the source of life than others, more adept at manifesting reality with exclusive access to the most mystical corners of the universe.

Overall, we’re focused on finding peace and tranquility collectively, despite a brief flash of initial disorganization. A word to the wise, though: Harmonious, calming energy aside, be aware of yourself and your surroundings during this lunation; not everyone will use these good vibes for fairness, and may target lighthearted types as naive marks. Stay connected to your intuition and don’t brush off whispers and tiny messages that come through the ether in these weeks.

NEXT UP
Astrology
January 2023’s New Moon In Aquarius Is All About The Big Picture
Culture
Caroline Polachek In KNWLS & More Party Photos You Missed
Entertainment
Samia On 'Honey' & Saying The Ugly Part Out Loud
Nylon Nights
How Renzo Rosso Turned The Pelican Hotel Into A Miami Must-Stay
Style + Culture, delivered straight to your inbox.