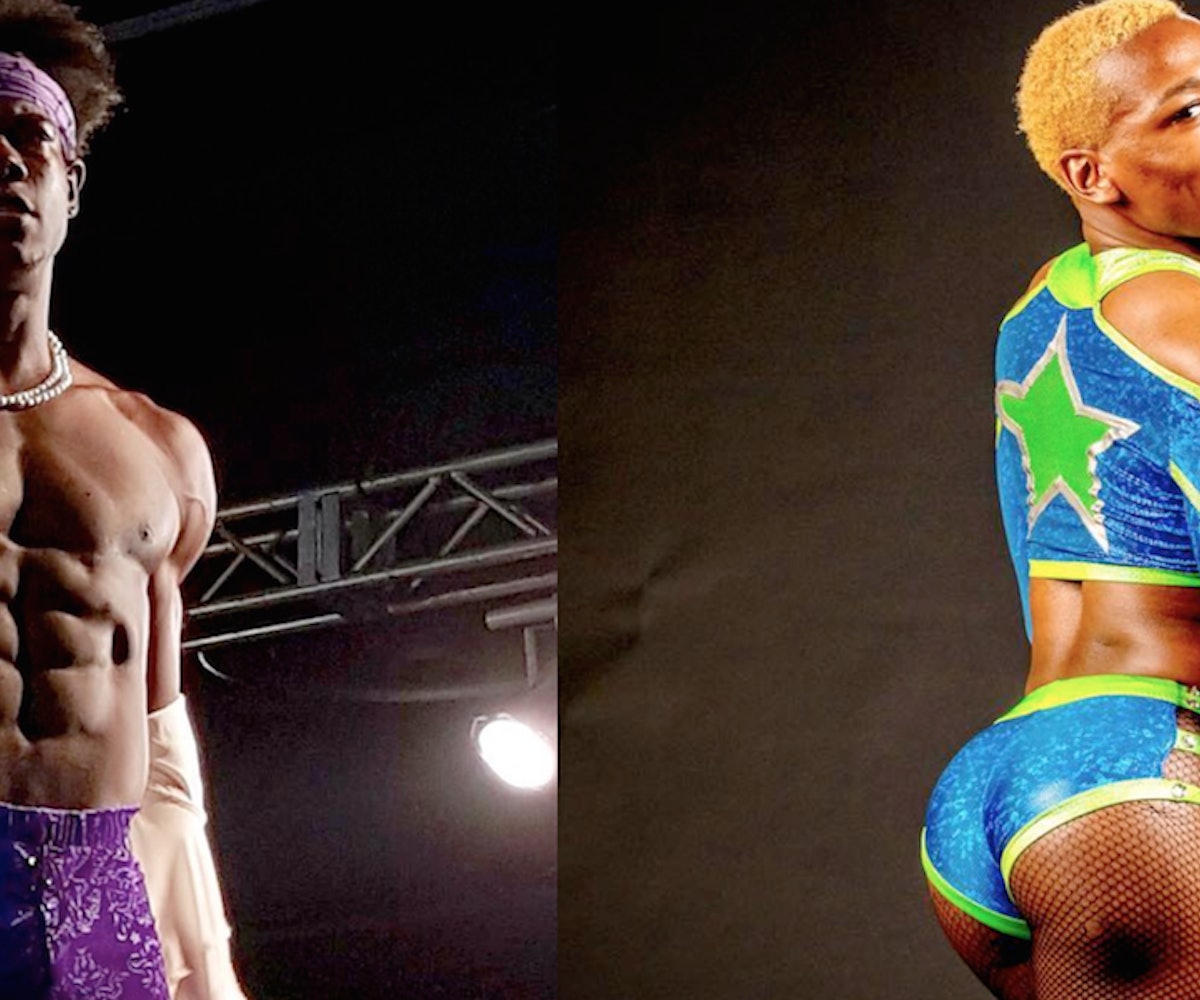 American wrestling has a long tradition of playing with offensive stereotypes in ways that often alternate between being regressive and progressive. From overt racial and ethnic caricatures acting as villainous heels (wrestling slang for the bad guy) to more recent complex and post-modern subversions of these characters, the medium of pro-wrestling has been slow to adapt to the socially conscious dynamics of the new millennium. One particularly pernicious example of wrestling’s insidious tendency toward bigoted writing has been the creation of the effeminate dandy character. Usually played by a straight performer, these dastardly scoundrels would provoke their enemies with sexual come-ons or cowardly, girlish behavior; audiences inevitably cheered when their effete antics were overcome by more manly heroes.

In Mexico’s Lucha Libre style of pro-wrestling, the gay-coded villain is much less of a trope. Instead, some of Mexico’s most beloved luchadors are fabulous fighters known as exóticos. In a culture of machismo, these beautiful bruisers (who, unlike in the American tradition, are often played by actual queer people) appear in makeup and gaudy showgirl-inspired outfits and taunt their opponents with flirtatious kisses amidst impressively acrobatic displays of power and skill. Mexican audiences have embraced exóticos like Cassandro and Pimpinela Escarlata as faces, or técnicos (wrestling slang for the good guys), and they've even become national treasures.

“There have been sexually ambiguous characters in pro-wrestling for a long time but in Mexico, even though it is a mostly Christian country, the exóticos are a tradition,” explains current No Limits Wrestling Death Match Champion Casanova Valentine. “In the States, nothing like the exóticos really existed so everything taboo usually would fall under a heel character.”

In 2018, plenty of actually queer and/or queer coded characters are making names for themselves on the indie circuits. Playing both heels and faces, these performers are complicating the traditional depictions of queer pugilists by refusing to adhere to past traditions—and audience reactions to these superstars have been mixed.

It was only two years ago that WWE publicly discussed their meetings with GLAAD in the hopes of introducing sensitive LGBTQ story lines to its product. We’re only just beginning to see the results of that meeting—openly queer performer Sonya Deville proudly displayed rainbow gear at Wrestlemania, alongside supportive ally Finn Balor, who has begun selling rainbow versions of his merch for queer fans—but while the WWE struggles, less massive federations are way ahead of the game.

“Maybe I'm living in a bubble here in Austin, but the crowds seem generally supportive of gay babyfaces and uncomfortable or ambivalent when asked to boo a gay heel; they don't want to seem bigoted and would much rather cheer than boo,”’ pro-wrestler Dan “The Man” Ziglar of Party World Rasslin told me.

Lucha Underground, a lucha libre-inspired fantasy wrestling series currently running its fourth season on Robert Rodriguez’s El Rey Network, introduced a new character named XO Lishus (played by Capitol Wrestling Heavyweight Champion Sonny Kiss) on a recent episode. Taking place in a comic book-inspired universe populated with actual legendary pro-wrestling personalities alongside original characters invented for the show, XO Lishus is not the first openly gay performer to do battle in The Temple, but while exóticos like Pimpenela were often used for innocuous comedic effect, XO has already been established as a plucky underdog and serious contender.

If the WWE is attempting to figure out how to write openly gay characters, XO makes for a fascinating case study on empowering queer representation in 2018: How should announcers discuss such a performer? Will the art form’s traditionally hyper-masculine audience rally behind a gay hero?

Using only the (obviously coded) word “flamboyant” to denote XO’s personal style, announcers Vampiro and Matt Stryker (both of whom curiously have a past checkered with misogyny) were careful about not dismissing the debuting bruiser as a joke. In fact, the two praised his movement, ring awareness, and unique offense. Meanwhile, The Believers (the show’s nickname for its fan base) immediately began chanting for XO as he trounced over-cocky heel Jack Evans with a series of graceful and feminine attacks which included a high leg lift axe kick, sit-out splits that the queens of RuPaul’s Drag Race would envy, as well as back handsprings, and a handful of confident, taunting twerks.

Although the heavily edited show presented XO as an immediate fan favorite, reaction to the match was mixed on social media. While many were pleasantly surprised by the young upstart, others were quick to condescendingly dismiss this whole gay thing as a “trend” and compare him to another wrestler: NXT’s Velveteen Dream.

The WWE’s developmental brand, NXT, employs an entirely different writing team than the main roster, meaning they are more willing to experiment with stories and characters. A rising legend on that brand is Patrick Clark aka Velveteen Dream, a 22-year-old obviously inspired by the sexually ambiguous and overtly libidinous Prince.

Unlike Kiss, Clark is not openly queer, nor is his character. But Dream’s penchant for demanding backstage areas be re-decorated, his eccentric twirls and tantalizingly sexualized movements, and his outrageous fashion choices (sometimes even decorated with rainbows) tell quite an unsubtle story about the character’s inclinations. Also unlike XO, Dream plays a heel—often attacking would-be allies and gloating about his prowess, Dream overpowers his opponents with his brute strength and domineering size. It’s unclear if Dream was imagined to be a Big Bad in the yellow and black brand, but despite his ignoble proclivities, he has become one of the company’s most popular prodigies—despite how immoral he’s portrayed.

“Oddly enough, it feels like a very old-school approach and new at the same time,” said Marty DeRosa, co-host of the popular pro-wrestling podcast Marty And Sarah Love Wrestling. “He is still evil, arrogant, flamboyant, and all those attributes that sexually ambiguous characters embody, yet the crowd is getting behind him. The NXT crowd is a smarter and more liberal crowd than most. Years ago, there would have been homophobic chants and signs; wrestlers and commentators would have echoed those sentiments.”

It’s sad that the (assumedly straight) audience of Lucha Underground was so quick to dismiss XO as a rip-off of Dream (despite the fact that Kiss has been wrestling for longer than Clark) and that both were characterized as a “trend,” as if queer lives were only fashionable at this moment in time, sure to fade away from the spotlight soon. It’s sad that these fans were not able to look past the coded and overt queerness and racial similarities of these characters to see their obviously distinctly different styles. It’s sad that attempts at progress are seen as pandering.

Nonetheless, whether the narrative is artificial or organic, the growing popularity of these characters represents an evolution of the exótico trope.

“Sonny Kiss is a one-of-a-kind in my opinion, but seeing him in Lucha Underground definitely invites comparisons to the exótico style,” said Ziglar. “Velveteen Dream I see more in the mold of Goldust, which is the WWE's confused take on an exótico character. It's stunning to consider how little the WWE understood of queerness, and possibly even less of lucha libre!”

But to what extent mainstream audiences are ready for this is another question entirely, although many within the industry are positive about the future.

“American audiences are ready to welcome exóticos and other LGBT characters in their pro wrestling. It's just a matter of whether the gatekeepers of the craft—the performers and promoters—can find a way to address the fans' interest,” said Ziglar.

“I think that pro-wrestling is always a little late to things, and this subject is no exception. I think with the right performer and story line a true exótico can get over like crazy,” echoed DeRosa. “It will all be in the storytelling and how the company promotes said exótico.”

It’s unclear if either Kiss or Clark see themselves as within the tradition of the exóticos, however those that embrace the characters are continuing to prove that queer people can be heroes of their own stories instead of side characters in another person’s show.

“I think it’s time for fans to have a gay face in the mainstream to root for. I think we’re finally at that time in history,” concluded Valentine. “There are enough fans of every style that I think there is room at the table for everyone in pro wrestling today.”