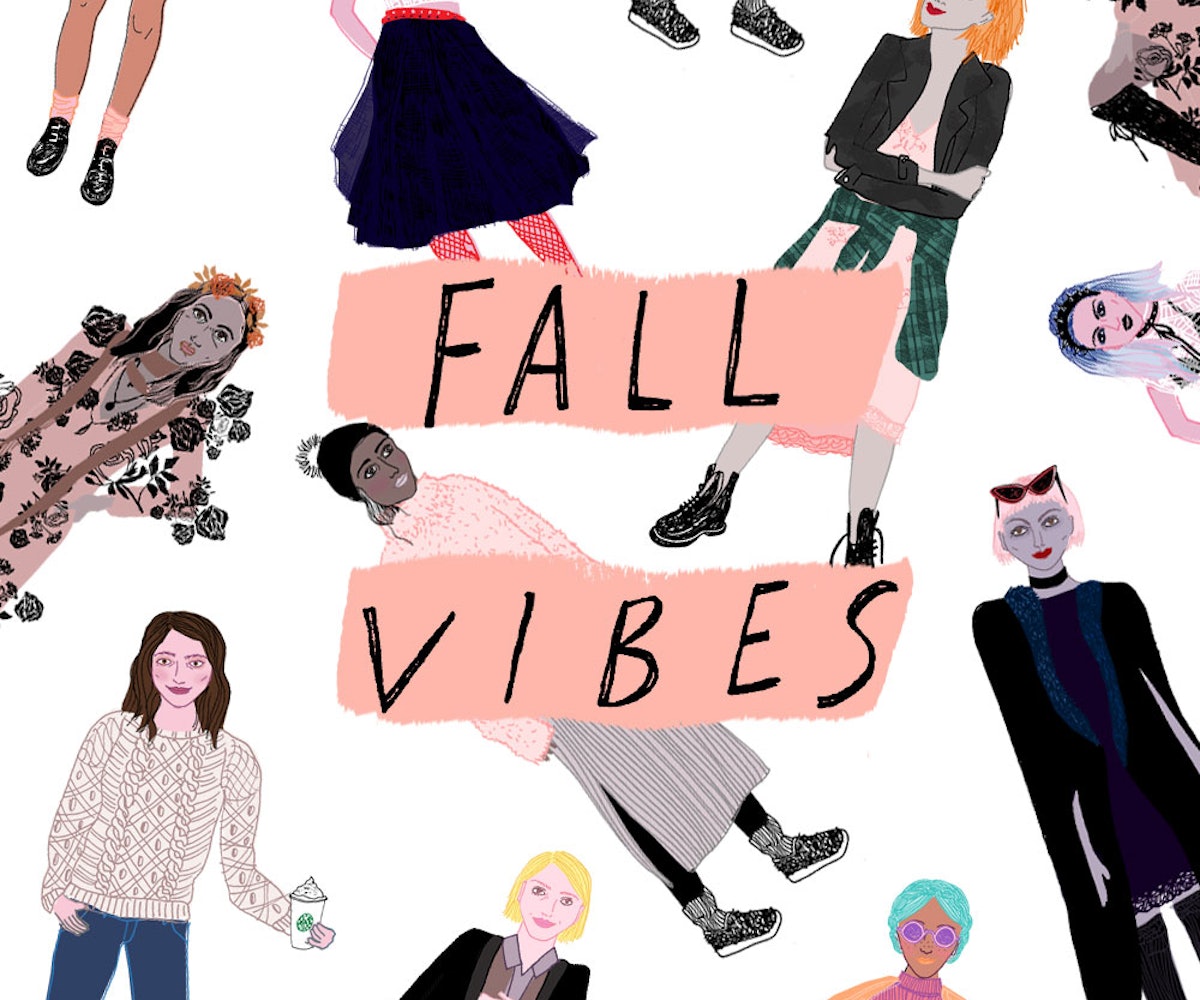 The Earth is rotating, the weather is changing, and it's time to reinvent your sense of self. So, we ask you: What's your fall vibe?

With which sartorial intention will you face the falling leaves? How will you choose to deal with the oncoming winter chill? Which color of the wind will you channel? The choice, friends, is ultimately yours. And while you should feel free to abandon your initial vibe for another, it always helps to choose one to help you ease into the season. After all, spending less time deciding what to wear leaves more time for you to frolic around.

Click through the gallery for the fall vibes we're into—from Prep School Fuck Up to Cocooner.

They told you that you were birthed in a private room in Cedars Sinai, but you know better. That was done, metaphorically at least, in a vast field filled with lavender and sunflowers: An odd combination, but that really goes to show how quirky and unexpected you are. You've always been very intuitive, and you really started to explore the concept of "inner peace" after you lost it in that Range Rover road-rage incident when you were 16. You're 17 now, and you totally know better. The only time it's appropriate to throw a tantrum is when Coachella three-day passes sell out, or when you can't find your For Love and Lemons slip.

Whether a practicing witch or simply an admirer of the aesthetic, this is truly your time to shine darkly. You probably leaned heavily into those beach-witch vibes over the summer, but now that it's too cold to spend all day in just a black bikini and crystal necklace, you get to pull out those pointy boots, dramatic coats, and velvet-everything you've been dreaming of. When you're home you're lighting candles and sage-smudging everything, but when you're out, you're out. A little cold weather never stopped a power witch: If anything, it gives you strength.

Life has never been the most challenging for you. You were handed your first Black Card when you were six, oddly enough one year before you got your first pony: Your parents, they never really understood children, or how the world works, for that matter. Now, you want to experience "normal" things, like going to the mall and shoplifting a few tubes of dark-purple lipstick, or locking yourself in your marble bathroom and bleaching your hair to oblivion. But before you forfeit your inheritance for a rebellious few weeks, be sure to pick up some Zana Bayne harnesses, La Perla bralettes, patent-leather jackets, and Alexander Wang Sloane boots.

Fall is just summer only later in the year, right? It's only slightly colder if you think about it. So, those shorts and that crop top you've been rocking? Yeah, they still fit, so might as well wear 'em till you literally can't because you'll freeze to death. But that's never going to happen, life is just a series of summers punctuated by brief periods of other seasons that no one cares about. If it gets chilly, just wear a cardigan. Maybe some socks. Maybe bring some hand-warmers just in case.

Doesn't matter if you've ever actually ridden a horse in your life: This fall, you'll look the part, because nothing says autumnal like a New England horse race followed by hot chocolate at the lodge. Or whatever. Grab those over-the-knee boots you've been dreaming about, and don't even think about putting your arms through the sleeves of your wool cape. Then, perch near a fireplace or even just an exposed-brick wall with a historical nonfiction novel—your indoor/outdoor style works just about anywhere.

Listen, Miss Thing, just because Starbucks has made a sugary drink seem #authentic does not mean it is. Regardless, congrats! You, your love affair with the beverage and the coffee giant have unofficially created a sub-season within fall. PSL season and its thrivers come alive in chunky knits, indigo jeans, and sheepskin-lined Australian boots that were originally made for the beach. You bat for Team Comfort and get your kicks paging through a somewhat-used edition of Walden. You come alive during sweater weather, and will stop at nothing to incorporate pumpkin into every aspect of your life. Cynics might throw shade your way, but pay no mind. You are truly great and we cannot wait to see the Instagrams you upload this season. They’re going to be so #fall, so #fabulous, and so #delicious.

For you, there's one thing that is definitely out this fall, and that's visible body shapes. Instead, your preferred silhouette is one of shapelessness. What matters to you is warmth. You want to incubate. You want the air to touch your face and that's about it. Wrap yourself up as much as you want; the more layers, the better. The larger the outerwear, the closer to the goddess.

Chances are, your wardrobe doesn’t vary between seasons. It doesn’t matter if it’s summer or fall, you’re going to rock those black boots, regardless. Your vibe is a mixed bag of influence and doesn’t abide by the weather. It’s all about the look, and you carry one all day, every day. Rock on with your against-the-grain attitude. But please do wear a jacket when freezing weather rolls around. No one has to suffer that bad for fashion.