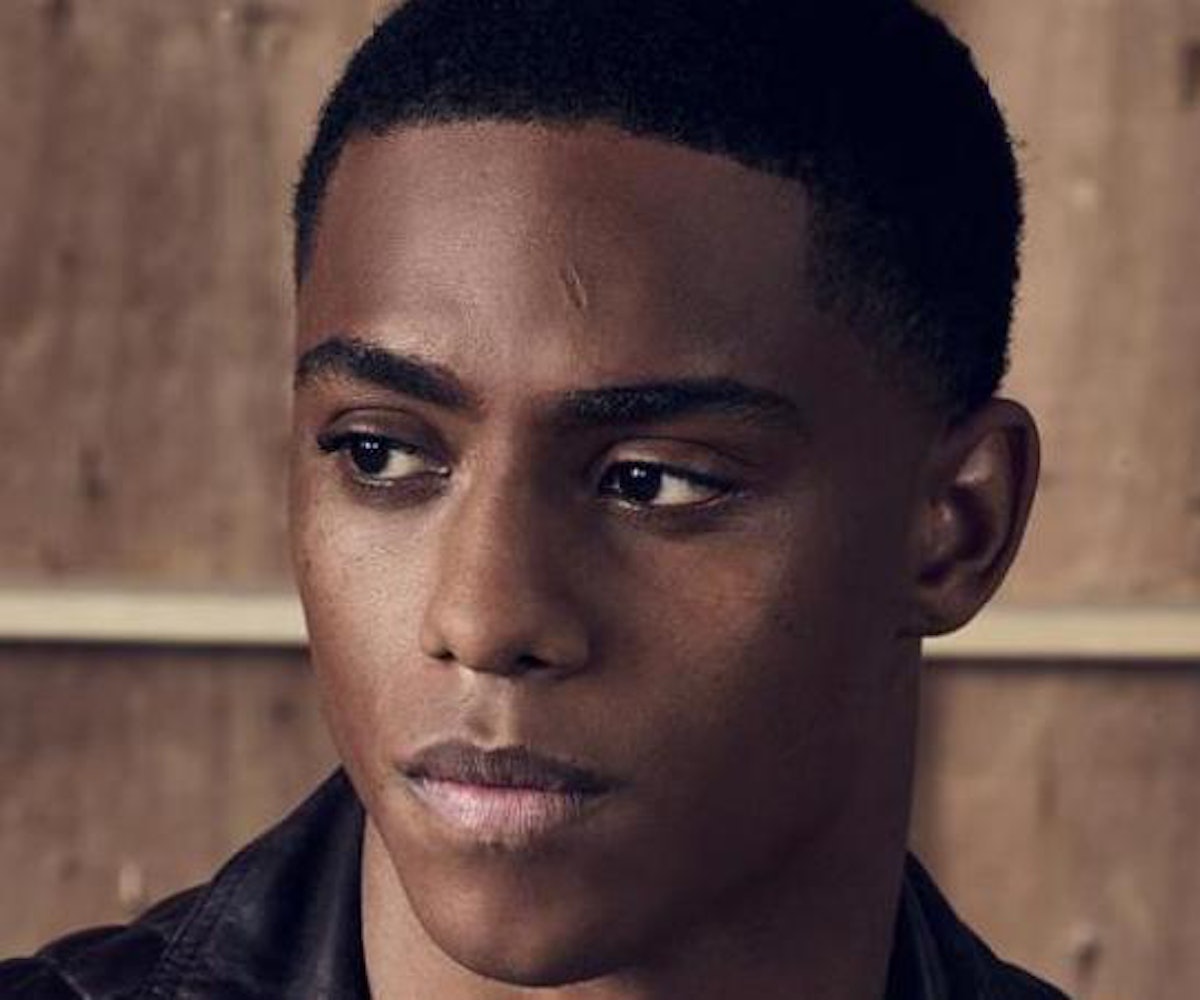 Keith Powers may play designated “bad boy” Jordan Wilder in Freeform’s hit show Famous in Love, but in real life, the earnest Sacramento native is miles away from the brooding troublemaker archetype fans of the show would probably expect him to be. This makes it all the more ironic, then, that the pitfalls and trappings of fame are a major theme in Famous in Love’s plot. But while WIlder's onscreen alter ego may have a dark past and a knack for courting tabloid headlines, Powers himself is pretty averse to all the gossip, drama, and posturing he’s had to start dealing with as someone with million-plus Instagram followers. However, Powers sees the good side of this much fame, though, and likes to think that, unlike his character, he can use his platform to amplify the issues that matter to him.

That said, there's still plenty for him to be wary of in an industry not exactly known for being nice. Ahead of the show's second season premiere, read our Q&A about everything from Wilder's difficulties with newfound fame to working with industry vets like Bella Thorne and I. Marlene King.

Were you familiar with I. Marlene King’s work beforehand?

It’s weird because when I first read for Marlene—for Famous in Love—I knew her face and her name. But I wasn’t connecting her with Pretty Little Liars. Then I started thinking about it, I remembered seeing her on set when I had a cameo on PLL... I’m pretty sure she had [something to do with getting me hired]. For Famous in Love, I tested for all the parts, I tested for Jake Reiner and Jordan, and I ended up getting Jordan... but I actually got denied this role at first. And they just called me back randomly. [King] always believed in me. I’m sure she had a huge impact on casting.

On this show, you’re surrounded by a lot of great industry veterans like Bella Thorne. What was it like working with her?

Bella is super-cool to work with. She’s really chill and down-to-earth, but she does not play when it comes to speaking her mind. That’s what I love about her the most, and I feel we take people like that for granted. Even if they may not be right, you have to respect them for speaking their mind, especially in this industry—not everyone is real. Not that they’re not authentic, but they do need to put on different masks to get to different places in their career. It’s fine to play the game, be polite, and be someone easy to work with, but I just love that Bella is unapologetically her. It’s hard to be different sometimes.

It seems like you’re also not afraid to call out the bullshit and be political, especially on Twitter.

It’s very important to speak on things, because, [as a celebrity, you have] a big platform. There are a lot of kids out there looking up to people in entertainment. The problem is when some famous people speak on issues they aren’t educated on. I always say that, if you’re going to go into [political topics] and speak your mind, educate yourself before you speak so you get your message across. And I don’t think people should just [speak up] to fit in. It’s people’s lives you're playing with. It comes with a big responsibility.

What is a cause that you feel particularly passionate about?

From day one, I’ve been vocal about police brutality. I always will be. Point blank, it’s horrible. The last one I spoke about was Stephon Clark—a young black male who was killed in Sacramento in his grandparents' backyard—that really touched me because I’m from Sacramento. To see a tragedy like that happening in the city I come from, it weighs heavy on my heart. That could’ve been me. That could’ve been my cousin. That could’ve been my dad. It’s not a game. There are people that I grew up with marching in downtown Sacramento, and it kind of hurts, because you always feel kind of bad when you move away [to pursue a career in the] entertainment industry. You’re living your life, doing interviews, living in L.A., and you see something like that going on back home... you feel guilty.

Famous in Love is this very meta show, in which you’re talking about the pitfalls of fame and coming up in Hollywood. What’s it been like for you to be suddenly thrust into the spotlight? Have there been any big learning experiences for you thus far?

The biggest thing I’ve learned is that we’re all humans. We all feel some type of way, but what separates people is how you deal with [the situation at hand]. The biggest thing I’ve learned is that you should let your art and your talent speak for you. When you have a platform, you have to know that you have a big responsibility. Sometimes it’s better not to comment on everything and just keep it to yourself, because your opinion might get [twisted] into a million different things... because you had an opinion about, like, a song. It sucks sometimes because you want to express your feelings, but I guess that’s part of being professional in the entertainment industry. You have to be careful, because you have a voice, and you don’t want to say the wrong thing. It’s a big deal of responsibility. But if you don’t have anything good to say, don’t say anything at all.

You go through a phase in your career when people think they know you based on what they see on TV and online. The way I was raised—the stuff I’ve seen growing up—you’d be surprised. It’s crazy different from what people see online, so they think they can talk to me in a certain way, and it’s annoying sometimes.

I always want to show fans my personality, and I have to dial that back now... I have to censor myself. It sucks. But I guess it’s part of maturing. You have to know to separate your private life and your public life. Because you can’t get them mixed up [in Hollywood]; otherwise, you’ll get lost in the fame and what the industry wants you to be, and that’s too much pressure.

Famous in LovexseSeason 2 premieres April 4 at 8pm EST on Freeform.