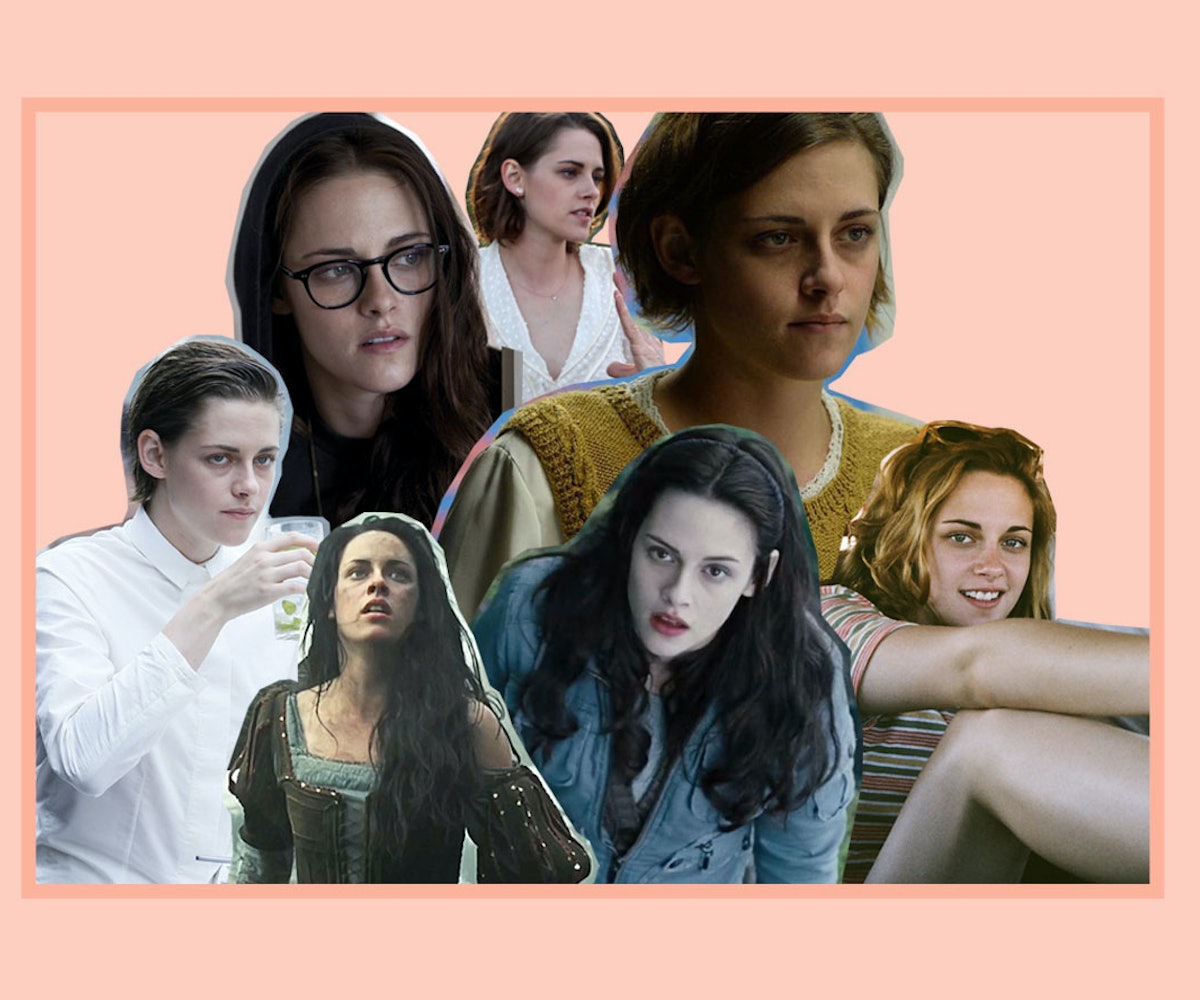 It's the rare actor who is given a film retrospective at the age of 26, but Kristen Stewart is anything but ordinary. Since she first caught our attention with her performance in Panic Room, in which Stewart, at just 10 years old, held her own against legendary actors Jodie Foster and Forest Whitaker (as well as a scene-chomping, cornrow-sporting Jared Leto), Stewart has consistently surprised and delighted us with her wide-ranging cinematic choices. Her IMDb page is testament to the diversity of her interests and the prodigiousness of her talents and is thus a fascinating peek into what is possible to achieve for an actor who refuses to be typecast.

That said, Stewart's approach to choosing roles also means that there really isn't any one specific type of movie that comes to mind when thinking of a "Kristen Stewart film." There is no reason to assume that just because someone loves Twilight that they will also appreciate the auteur-driven work that Stewart's been drawn toward over the last few years. And just because a person responds strongly to the dark, quiet weird loveliness that is Adventureland, it doesn't mean they will be enthusiastic about Woody Allen's 1930s period-piece Café Society. Or maybe they will? Both also co-star Jesse Eisenberg, so who's to say, really?

Regardless, the thread that ties all the following performances together is Stewart's gift for inhabiting every role with an innate intelligence and sensibility specific to her. That it is possible to love all these films (yes, even Snow White and the Huntsman—or, at least, Stewart's part in it) is proof of Stewart's magnetism and preternatural talents. But also, let's be honest: Everyone has a favorite version of K. Stew.

Here then, is a list of all of Stewart's greatest hits, and what it is that your favorite performance of hers says about you.

You like deep cuts. You like to say you like the thing you think nobody else really likes. You like to say your favorite Beatle is George. Here's the thing, though: The mere fact that you're choosing a favorite Beatle means you're already far from being avant-garde. But that's okay, really, because George is good. And Panic Room is good. Even if it does have Jared Leto. It's okay, then, to take a photo of an adolescent K. Stew with you when you get your next haircut because her hair was so cute in that movie. Oh, and also? Your favorite character in The Baby-Sitters Club was Stacey.

You like novelty T-shirts; sincerely now, though you used to wear them ironically. You used to do everything ironically. Or, you thought you did. You didn't go to camp ironically. But you definitely went to camp. In fact, your camp friends are still the only people who you think really know you. This will change as you get older. You will think nobody really knows you. But you will keep going, doing your best to be honest, never lying about things like whether or not you met Lou Reed on a dark night on a quiet New York street. You try to be truthful, you and your drawer of novelty tees.

You might be a grown-ass adult, but you are not afraid to tell people you love vampires and One Direction. You discovered what your Patronus was the second you found out it was a new feature on Pottermore. (Yours was a badger. What does Pottermore even know anyway?) You have a traditionally spelled name, but you would never do that to your own child. You are unaware that anyone has ever made fun of pumpkin spice. You can't wait to try a rainbow bagel the first time you visit New York City.

You throw French words into normal conversation, but for some reason, it doesn't sound at all pretentious coming from you, just unbelievably charming and natural. You like the mountains more than the ocean. Your face can take a lot of makeup, but you don't wear much. You love your shoulders and show them off whenever possible to great effect. You have been told you glow. Your shrug is a thing of quiet beauty. You don't know how to wink (or rather you're not capable of it), though you think you do. You think you disappear when you put your glasses on, but you only stand out more. Even though you know the answer, when someone says the name "Chloë Grace Moretz," you still say "Who?"

You like to tell people for whom you are voting. You'd totally put a bumper sticker on your car, but you don't have one, so you put a button on your jacket. You believe in conspiracy theories. Your favorite is the one about the Denver airport. Your second favorite is the moon landing. You leave marginalia in all your favorite books, even though you know you'll never read them again. You just like to think someone will see your thoughts someday and you'll matter to that stranger, if only for a moment.

You own five different pairs of jean shorts, and they all stand out as totally distinct to you. You could care less about most of your other clothes. When sitting shotgun, you rest your feet on the dashboard. You take your shoes off first. Your feet are always weirdly clean. You say your favorite Kerouac is Dharma Bums, but really, you haven't read it all the way through. You haven't read much all the way through. You like to say you're insatiable, but you haven't figured out yet for what.

You are, by nature, a contrary person. You like to like what nobody else even cares to consider. Why do you do this? You do this because you're afraid of your own opinions, afraid to make up your mind, convinced that once you do, your decisions will be irreversible and you will be stuck with one person/philosophy/path in life forever and ever. But is that so bad really? Is it so bad to know something or someone really well? It could be. But not necessarily. And, like, anything is better than having to watch this movie all the way through.

You'd argue that a Kristen Stewart film doesn't really need to star Kristen Stewart or even have her present for more than a scant few minutes of screen time in order to be a Kristen Stewart film. You are, then, unafraid of being wrong. But you are also the kind of person whose devotion for things is dogged and interesting in its unwavering commitment. You are not fun to play games with, though. You care way too much about winning. You are uncomfortable in urban environments. You consider Cheyenne, Wyoming, an urban environment.

You want to live forever. This is why you drink Soylent. This is why you work out to such a degree that you're not sure if the salty drops sliding into the corners of your mouth are sweat or tears. They're probably both. But they aren't blood because you feel bloodless. You maybe are bloodless. You weren't sad when Gawker shut down. You have a really popular Instagram, though.

Presenting at the Oscars with Arm Bruises and a Limp (2013)

You curse too much, but you can't really bring yourself to care. You wash your hair once a week, or maybe not even that much. You don't wear deodorant. Nobody has ever complained. The opposite, really. You have one of those laughs that's silent and then gets really, really loud. Like, almost a wheeze. It's one of other people's favorite things about you. You vape.

You have opinions on Woody Allen, but you'd rather not share them, which, honestly, is almost definitely for the best. In fact, you have opinions on just about every celebrity to a degree that is maybe a little troubling? Or maybe it's not. Lady Brett Ashley makes you uncomfortable.

You wear lipstick on a daily basis. Well, except on the days when you're wearing leather. You're very aware of how close you toe the line of self-parody and so you don't. But you can't help it! You love dive bars; you live for them; you live in them. You have very strong feelings about what makes for a well-curated juke box. You like "Crimson and Clover" more than any other song ever recorded and you've put it on every playlist you've ever composed for someone you were (or wanted to start) sleeping with.

You wonder when K. Stew will work with Paul Thomas Anderson. You hope it happens soon. You wish Julianne Moore was in your life in a bigger way, anyway, as a friend, mentor, annoying downstairs neighbor. Anything. You always have weird bruises on your legs and you're never sure where they came from. You're considering chopping all your hair off. You like freckles. You wish you had a widow's peak. You're tired.

You've spent so much of your life convinced you're an outcast that you don't realize how much everyone loves you. And, like, everyone loves you. You're the fucking best. You're so cute. You drink too much seltzer, though. You've been trying to learn guitar, but you're sort of hopeless. That's okay, though. You can fake it. Nobody will think you're really any good at it, but they love you too much to care about it anyway.

It's hard for you to feel close to people, but you still believe in happy endings. Fairy tales, after all, have always been your favorite. You prefer baths to showers. You prefer dogs to cats. You don't think you can dance well, but you can. You have a nice singing voice, but your range is limited. You think you'd like Vegas, but you won't.