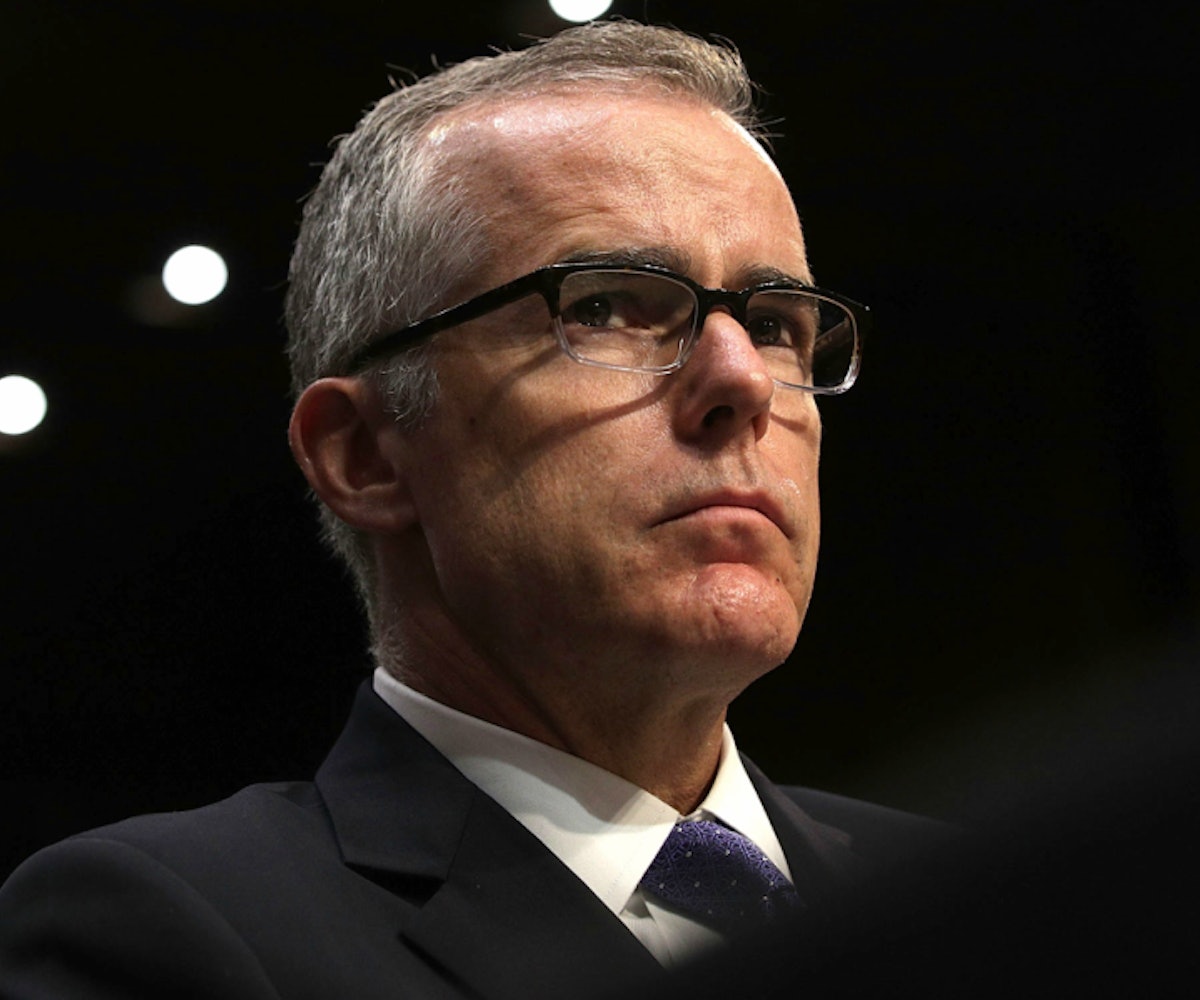 In a move that has been rumored for weeks now, United States Attorney General Jeff Sessions has fired FBI Deputy Director Andrew McCabe just two days before McCabe was set to retire after 21 years of service. Although a lot of attention has been paid to how this puts McCabe's hard-earned pension and benefits in jeopardy, McCabe himself puts the focus squarely on what this means for the country: Anyone investigating the president and his associates' ties to Russia will be mercilessly singled out and attacked.

McCabe became a polarizing figure during the 2016 presidential campaign. First, McCabe's wife Jill ran for a state legislative seat in Virginia as a Democrat and accepted campaign contributions from then-governor Terry McAuliffe, a longtime supporter of Hillary Clinton. Republicans cried foul over the move and, after the FBI and Justice Department's compliance offices found no misconduct, said that there was a clear conflict of interest given the McCabes' relationship. Then, McCabe made even bigger waves by directly contradicting the White House's story about why then-FBI director James Comey was fired. The White House said the firing was because Comey had lost the confidence of rank-and-file FBI members, whereas McCabe declared "Director Comey enjoyed broad support within the FBI and still does to this day."

McCabe has also been investigated for the way he and Comey handled their own investigation into the Clinton Foundation, and both have been publicly labeled by President Trump and other Republicans for being biased Clinton supporters. This was compounded by criticism about him "lacking candor" with investigators about his contacts with a Wall Street Journal reporter, and "an unauthorized disclosure to the news media."

These were ultimately the grounds with which Sessions chose to fire McCabe on Friday night.

Both the OIG [Office of the Inspector General] and FBI OPR [Office of Professional Responsibility] reports concluded that Mr. McCabe had made an unauthorized disclosure to the news media and lacked candor—including under oath—on multiple occasions.

McCabe, however, isn't letting that stand without a fight.

, McCabe fired back at "every sort of false, defamatory and degrading allegation" that has plagued him and his family for the last year and a half.

The President’s tweets have amplified and exacerbated it all. He called for my firing. He called for me to be stripped of my pension after more than 20 years of service. And all along we have said nothing, never wanting to distract from the mission of the FBI by addressing the lies told and repeated about us. No more.

McCabe went on to reiterate that he had done nothing wrong in his contacts with the media. "The OIG investigation has focused on information I chose to share with a reporter through my public affairs officer and a legal counselor," he said. "As Deputy Director, I was one of only a few people who had the authority to do that." McCabe continued:

It was not a secret, it took place over several days, and others, including the Director, were aware of the interaction with the reporter. It was the type of exchange with the media that the Deputy Director oversees several times per week. In fact, it was the same type of work that I continued to do under Director Wray, at his request. The investigation subsequently focused on who I talked to, when I talked to them, and so forth. During these inquiries, I answered questions truthfully and as accurately as I could amidst the chaos that surrounded me. And when I thought my answers were misunderstood, I contacted investigators to correct them.

However, the most important part of McCabe's statement comes at the end, when he stepped back to showcase his mistreatment as part of a larger pattern of the Trump administration's attempt to delegitimize important government institutions, stating, "The big picture is a tale of what can happen when law enforcement is politicized, public servants are attacked, and people who are supposed to cherish and protect our institutions become instruments for damaging those institutions and people."

McCabe also refuses to let Sessions run with his own narrative about why McCabe is being singled out. For McCabe, the cause is clear:

Here is the reality: I am being singled out and treated this way because of the role I played, the actions I took, and the events I witnessed in the aftermath of the firing of James Comey... This attack on my credibility is one part of a larger effort not just to slander me personally, but to taint the FBI, law enforcement, and intelligence professionals more generally. It is part of this Administration’s ongoing war on the FBI and the efforts of the Special Counsel investigation, which continue to this day. Their persistence in this campaign only highlights the importance of the Special Counsel’s work.

You can (and should) read McCabe's entire statement below. It remains unclear as to whether he will be able to retire with his full pension and benefits, but it seems all but certain that McCabe will continue to be attacked and discredited as a witness to the wrongdoings of the Trump administration. Some pundits are also musing about whether or not McCabe will sue the government over his firing and what other disclosures that might lead to.

While this is a deeply serious matter that strikes at the heart of how fragile our democracy really is, MoveOn.org Washington Director

that might help you laugh a little through the tears: "Please let Andrew McCabe’s book advance be worth more than the value of his lost pension."