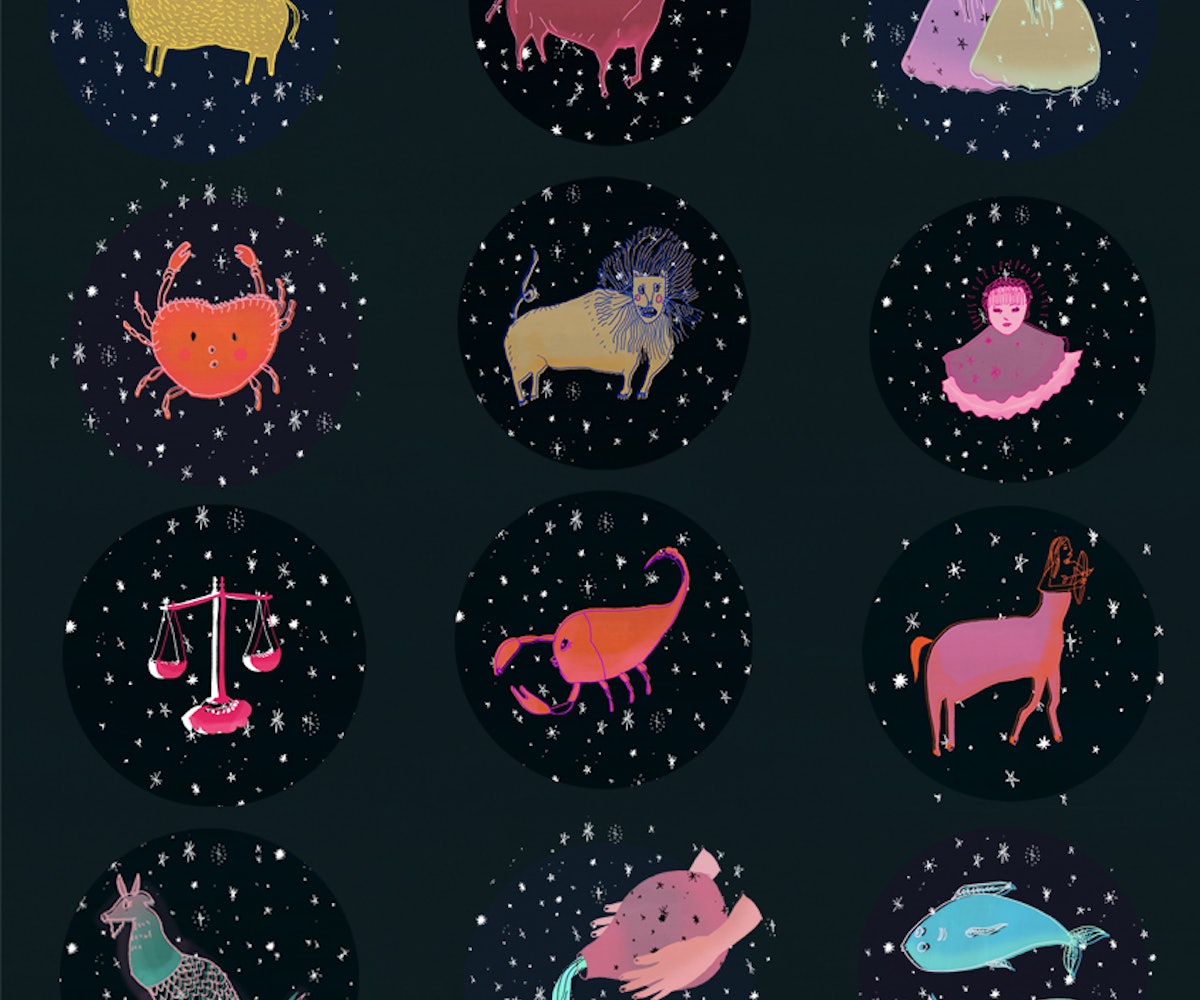 Hello and welcome to our very first horoscopes. We're starting in Aquarius, which will run through late February. The way I see it, we are all living in events that are Aquarius, no matter what our sign is. The moment I first noticed it was last week; I was listening to my favorite alternative radio station on-line, WFMU, and the DJ was discussing who was more valuable to avant-garde music, Yoko Ono or Phillip Glass—two Aquarians! At that point I knew the seasons had shifted. Ahead, what this means for you.

You are a fine magnifying glass. You know how when you focus a lens at a spot, smoke starts rising? This is a month to focus the weak light of the winter sun at work, to yield a fine dot of flame. Remember that it is your heat that can lift the hot air balloon, but only if you can trap that heat in the nylon. You don't need a parachute this month; your work should be in a nice groove. It will all pay off on Valentine’s Day as you will have a seriously physical weekend if you are feeling good about those work pistons pumping.

This full moon is called the “snow moon” because it’s the coldest of the year, which means it’s huddling time. Come together with other Tauruses and let your body mass protect the young. Even if you are in a warmer climate, the earth is no good for planting; it’s better for traversing in herds. Be confident that you have laid groundwork despite yourself over the new year; you might be traveling before March arrives.  It’s a classic Bullish prescription for you, too—look at pictures of Tina Turner while listening to "Have A Talk With God" by Stevie Wonder.  (Or, conversely, look at pictures of Stevie while listening to "Simply the Best" by Tina Turner.) Come the Full Moon, you might be mooing loudly like a bovine coyote.

Stress abounds, but as Mercury flits around, know that your deepest connections (yes even deeper than your family ties) are with friends who you have supported this past year. Those whom you have been advocating for have got your back this month. Sure, you can feel prickly, and sometimes people will tell that you should have chosen a wool sweater instead of cashmere. But know that you look great, you are warmer than they think, and if it rains you will be dry before the rest of them. Also, the Oscars are on their way, and make sure you have seen the film Boyhood, preferably in the theater, as the passage of time will certainly befit you Geminis who have birthdays at transitional moments like graduation. I think you will appreciate King Krule's song "Easy Easy" on your way to this Full Moon on Valentine’s Day.

In the Aquatic Ape Theory, it's hypothesized that man learned to stand upright by evolving from an ape that had to swim large distances. This is relevant to your upcoming month:  Expect to eat a few unexpected dinners alone, but you will be content to practice your swimming so you may walk more upright this spring. You will also get a chance to see family, so maybe one stroke of the left arm is followed by another stroke of the right. The seminal work on this evolutionary theory is The Naked Ape by Desmond Morris, and so my inference is: Buy clothes this month! Don't over do it, but definitely do it. Also, it’s not a bad idea to put a stranger's number in your phone this month. You never know what might come of it.

The Aquarius period of 2015 started off with a brilliant State of the Union address by our Leo leader Barack Obama. In the speech, Obama, who has certainly weathered storms, addressed new and interesting issues surrounding communication and internet rights, both themes of the Aquarian age. Leo, your next big cultural show was the Super Bowl, where you were repped by legend Tom Brady, who has taken a licking for some deflated ball rumors but appears to be in top mental form, with his astrologically compatible Aries Bill Bellicheck at the helm.  The final February test will be as Richard Linklater at the Oscars for Boyhood, a film that finds significance in mundane life, lionizing regular events in a story that spans an actual twelve years. You get the pattern, Leo: All these mettle-testing moments and the Full Moon in Leo, too! But what can I say: win, lose, or draw, you are still you this month, which is all anyone could hope for.

Virgo, you don't always dip into foreign affairs, and are usually quick to dismiss anything too distant from all of the activity in your immediate life—but what do you think about the tragedy that happened to the staff of Charlie Hebdo? You have such a keen mind, Virgo, and I am not trying to fluster you, but it might be important for you to explain some current events and form your own opinions about the world around you. Mercury commands it. Note that I am distinctly not asking you to binge-listen to the Serial podcast on NPR: It’s juicy but tedious, and you can find your own details. Be ready for strange events and very exciting dreams this full moon. It’s important to go out dancing and drink vodka late into the night. I can see you wincing at the suggestion, and I am not talking about your posterior here, but I love thinking about you dancing when Megan Trainor sings the line "all the right junk in all the right places."

I haven't seen Mockingjay, but Jennifer Lawrence, who is not a Libra, did her own singing, and you like that. You respect beauty and also know that the soul of art is not inherently beautiful, like possibly your karaoke voice. The adage goes: If you work with your hands, you are a laborer; if you work with your hands and your head, you are a craftsman; but if you work with your hands, your head, and your heart, you are an artist. Now do me a favor, Libra: For this month substitute the word "work" with the word "see," and instead of imagining that aphorism to be about making objects, let it be about making thoughts. Your eye is needed in the coming months, as is your aesthetic, as should be your willingness to speak up. The squeaky wheel gets the most grease, and while we are on the subject of musicals set in the 1950s, this could be a good time to re-watch John Waters’ original Hairspray and grin with satisfaction when "Penny Pingleton is permanently punished" by her mother. Libra, you are free.

Right when we ticked into Aquarius this January, Bjork’s break-up album was leaked to the public ahead of its intended release date. What a bodily phrase, Scorpio: “Oh, to be leaked into this world.” The album Vulnicura was recorded last November during gray and drizzly days that Bjork referred to as “sniffle weather.” You have reflected enough on yourself, and this February you will communicate your findings, even if the communication comes a little earlier than intended. This doesn’t just mean telling people close to you how you feel. This time of year you will be observed by strangers, so make sure you can still wear your heart on your sleeve, even if you are layering for the weather. It’s a very good time of year to enjoy a hot tea with a friend, especially on February 7th. This full moon, you will feel the weight of the moon moving the water on the Earth’s surface reverberate like a far away gong.

Finally, you made it through New Year’s and Christmas. It wasn’t so bad, was it? In fact you might be reminiscing a little bit. You are Mickey Mouse in Fantasia, the part where, as the Sorcerers' Apprentice, you make a mop sprout arms and carry water for you. You are Mickey Mouse, but you are incredibly hung-over. You will have to do the whole Fantasia routine with sunglasses on this month. Greatness is asked of you until the full moon, and then things will slow down and splash into the end of February with great self-knowledge. You are on a hero's journey, and there’s a whole closet of cleaning supplies and clothes to animate. Hot tip: The blogger known as Man Repeller is a fellow Sagittarian. Another hot tip: No need to buy hummus—plenty of tasty variations can be made easily with chickpeas in your blender, including warm and/or spicy varieties.

Capricorn, your body is your temple, even if it feels like an adobe shelter at times. Nurture your body this February. Chinese New Year is on the 19th, when we enter year of the Goat (which was once called year of the sheep). It’s very rare that the Chinese New Year happens on the cusp of Pisces, perfect for Capricorn’s fish tail. The sea goat starts at the ocean and climbs to the top of the mountain on her goat hooves, and as we start another year on the lunar calendar, it’s good to sit in the sea water this February and dream. The perfect soundtrack to this Tropic of Capricorn moment is "Tropic of Cancer" off of the new Panda Bear album. (The guy who sang about wanting “four walls and adobe slats” for his daughters in “My Girls” as part of Animal Collective was a water Cancer talking about you.)

Time doesn’t exist, so let me be late or early in wishing you a happy birthday. We humans have an invisible tension, either from happiness or dread, that makes us focus our anxieties onto the anniversary of our birth. These feelings pass like the quiet winter cloud after the calendar moves on. Our mundane anxiety that had swelled in abstract anticipation returns unfocused back to the tasks at hand, and it can be hard to just proceed one step at a time, but Aquarians should do just that. Your reality is reality (to you). Manifest it. Your lucky number is 8, as in Cre8 your destiny. You could benefit from going to an art museum this month. You could also use a haircut, although not a radical change just now.

We know you sacrifice a lot to make the world work more smoothly, Pisces, but you can also make it better by practicing your passions with confidence. Rehearse, practice: It’s a great time this February to skill-build. A Pisces friend once showed me a video of the young self-taught guitarist John Fahey before he was a folk legend, playing on TV. You should watch it, too—he even ends by saying he stole a chord from Gustav Holst’s “Planets.” If you have a water-color set, make little sketches a few days each week this February. Take notes: You are in a very psychic time of year.

NEXT UP
Beauty
Hailey Bieber's Latest Manicure Is Halloween-Themed
Beauty
The Most Viral TikTok Beauty Products of 2022
Life
NYLON Daily Newsletter: October 5, 2022
Beauty
Tumblr’s Coquette Aesthetic Is Taking Over Beauty — How To Get The Look