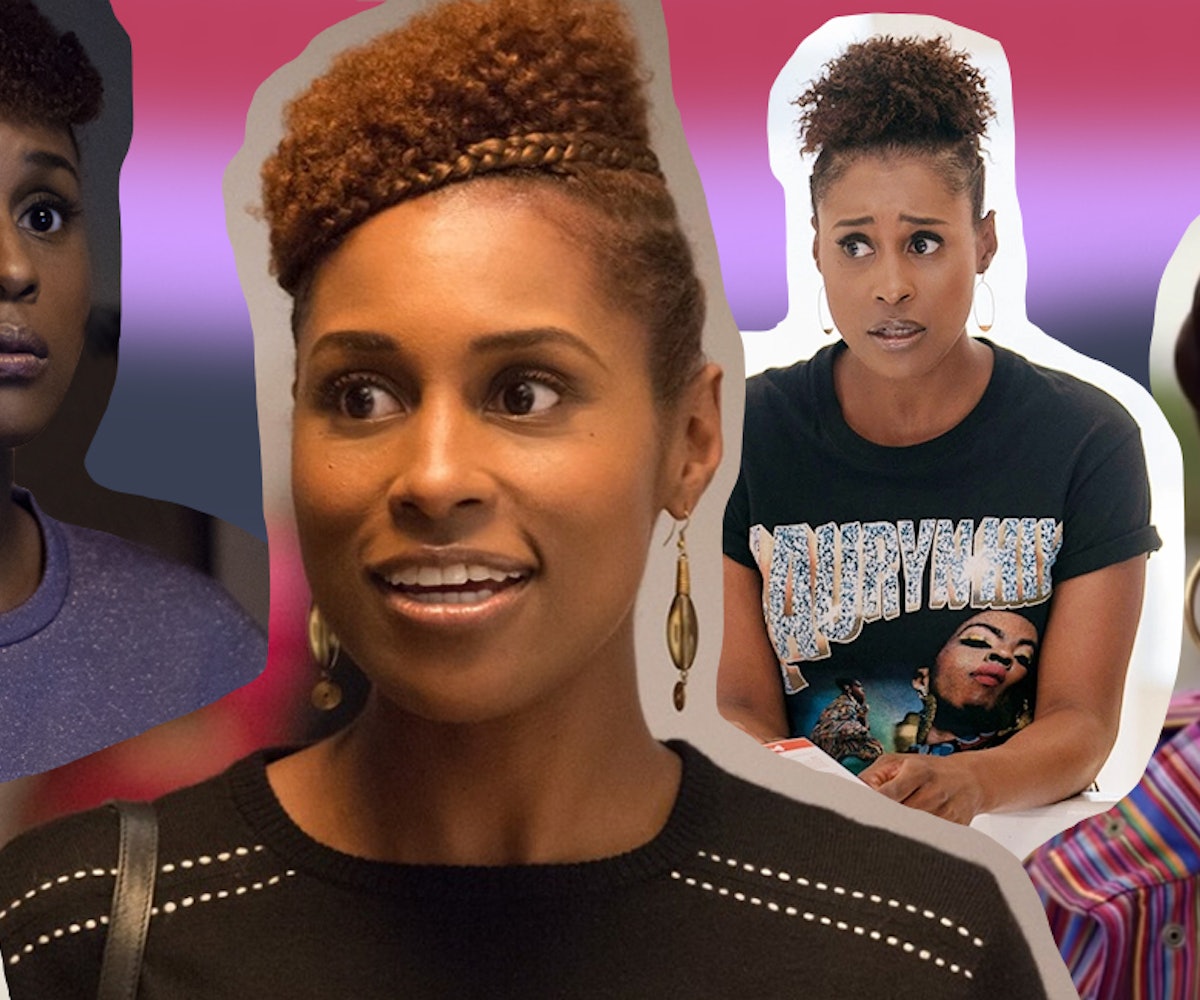 The relationship with their hairstylist is special for all women, but especially for those with natural hair. There's a certain level of knowledge, trust, and understanding that must go into styling curls—and not everyone is worthy or capable of the position. But celebrity hairstylist Felicia Leatherwood certainly is, and she's changing the way natural hair is portrayed on TV with her work on Insecure. Leatherwood met Insecure creator and star Issa Rae at an Essence magazine event, and she told Rae that, if she ever needed a stylist, to hit her up. That was five years ago, and Leatherwood has been molding Rae's kinks and curls ever since.

Leatherwood says she's not sure how she's maintained such a great relationship with Rae over the years. It undoubtedly has to do with the many styles Leatherwood manages to come up with for her or the connection the two have, but also it must relate to how meticulously Leatherwood cares about and for Rae's hair. “It's not just styling the hair, it's the care that goes into it," Leatherwood says. “Taking care of it, making sure it's healthy, making sure it's growing, getting the right products for her. You know, all those things equal the trust you will have with your hairstylist."

It also helps that, when styling Rae for events and on Insecure, Leatherwood makes sure to not stray too far from how Rae might style her hair if she were doing it by herself. “I try to keep everything kind of true to what she would do to herself, or how she would look, just day-to-day." And though, yes, the many different styles Rae's character cycles through every episode might not be realistic per se (Rae barely has enough money to pay rent, let alone get her hair done that often), it's television, people. Be grateful for all of the natural hair inspiration the show provides and worry about logistics later.

Ahead, we chat with Leatherwood about natural hair representation and her favorite products for keeping curls moisturized and edges laid.

On Insecure, it seems like Issa's character has a new style in almost every scene. How do you come up with them?

I go on Pinterest a lot, I poke around on there. Sometimes I will see different hairstyles on Instagram, but mostly I would say Pinterest. A lot of times I'll look at things you wouldn't even think about. Like, I'll put in “braid," and what will come up usually are not black women, it's really interesting. But I poke around and I look and see what everybody else is doing, because I feel like whatever you can do with straight hair, you can do with natural hair. So I do look at some straight hairstyles, and I turn that into a natural hair look.

When you're styling Issa's hair, do you typically start with her hair in a wash-and-go, or do you sometimes lightly blow dry it to stretch our her curls more?

I do both depending on the style.A lot of what I create is inspired by what she's wearing and what the day or what the scene is. So, if her scene is that she's going to meet Molly for lunch, and she's in a good mood, then I'm gonna create a hairstyle that makes you feel good, and makes it look like she did something that shows you she's in a good mood. If she's depressed, then I've got to create a hairstyle that shows you that she's unhappy and she didn't care that day, because these are the moods we go through as women anyway, and so sometimes we may fix ourselves up when we don't feel good, and other times we may not fix ourselves up when we don't feel good.

Have you been able to experiment more with her look over the years as her hair grows?

I definitely can do a lot more with her hair now that it's a little bit longer, but at the same time, one of the great challenges I have working on the show, from the beginning, is coming up with hairstyles that women with short or medium length hair can wear. And so it's been my absolute pleasure just trying to figure that part out, and represent the natural hair community in a way where welook good. I want to basically dispel the myth of some of those challenges. A lot of women will say, "My hair's too short, I can't do anything with it," and most of the time, you've just got to not think so hard about it. We're too strict when it comes to our hair. A lot of the times you can come up with a good hairstyle by not thinking so hard about it and just playing around in the mirror.

I think Insecure is the most prominent show—or the first show I can think of—where kinky natural hair is highlighted, and it's not a big deal. It's just, that's the way her hair is, so that's the way we're going to show it.

Yeah, thank you. We all just need to get out of our heads, so to speak, about what we think it's supposed to look like, and just make sure that we have the right products and pay attention to what the hair wants. If the hair needs moisture, then give it that. If the hair needs to just be left alone, then leave it alone. Sometimes we overthink it.

Speaking of products, the weather in New York is shifting a little and it's getting colder, do you have favorite moisturizing products that you would recommend for women with natural hair?

I've got my faithful, like my top four, [products] that I love. In terms of wash-and-gos, Don't Shrink by Aunt Jackie's, the flaxseed gel, is my favorite, and I love the leave-in by CURLS—the Blueberry Bliss leave-in, it's amazing, like right after you've shampooed your hair, before you style it. I love Alikay Naturals, she has this Shea Yogurt Hair Moisturizer, which is excellent if you wanted to kind of throw your hair up. And then, I don't know if you noticed, in the last episode there was this brand, The Doux. I really love the Bonita Afro Balm, it's a texture cream, where you can twist your hair up, and it's so moisturizing. I've been using Maui Moisture lately, the shampoo, because it's one of the things that I can find anywhere when I'm traveling on the road. There are so many great products, but those are probably my top favorites.

What about products for your edges? Issa's are always laid and perfect on the show. Do you have a favorite gel?

[Laughs] Everybody asks about Issa's edges. What I actually use is called Hair Gel Gummy, and it's the maximum hold by this company, Fonex. I'll rarely put heat on Issa's hair, but I'll definitely be able to, like, snatchit up and get the edges all nice and groomed with this. And people think I press her hair, but I literally haven't put any heat on her hair. I take a little edge brush, and I just brush it down, and I'm good to go. One of my other tricks—and I don't always talk about it—is I have a detangler brush. So a lot of times, before even putting her hair up, I will use the detangler brush because it helps to separate her coils really nicely so that I can get her ponytails and her updos pretty flat.

Do you also have any products you like to combat shrinkage? Because I know that's a big issue for a lot of women, myself included. Or, are you a fan of just embracing the shrinkage?

I will first say, embrace the shrinkage. I mean, because a lot of women don't have that option of stretching out their hair, because there are so many different textures and some textures are tighter than others. That's why you will see Issa with stretched out hair one day, and then shrunken hair the next, and it still looks beautiful. You don't look at her and go, "Oh my god, her hair is short, I hate it." You look, and you go, "Oh, wow, her hair is short today, and it's still beautiful." So, embracing the shrinkage is the key, because that's who you really, truly are.

But, if you want to, from time to time, kind of play with it without putting heat on the hair, it's always better to work with the hair when it's dry. A lot of women don't know, but if you shampoo your hair, condition your hair, do all your preparations one day, twist it up, wrap it up in a beautiful headscarf, then go back the next day and then de-twist it, it will stretch out for you, and you'll get that length you want. The issue with that is, once moisture sets in, in the air, it's gonna shrink anyway. So, why not embrace the shrinkage?

Back to the show, one thing that I do appreciate also is that you'll see Issa wearing headscarves to bed. Was that a conversation that you guys had on set?

Yeah, we wanted to keep that real, because it's true. We do wrap our hair up. Everybody's talking about that satin bonnet, or what happens when you lose your headscarf, and all those different, you know, scenarios, when it comes to wrapping our hair, so there definitely was a conversation about her wearing the headscarf at night.

There have been a lot of hairstyles over the past three seasons, but do you have any favorites?

There's one where she and Lawrence are eating from this season. They meet up and have a little lunch, I really love that. And you couldn't really see the detail in the back, but I put cowrie shells in the back, and I really enjoyed that. Issa's Senegalese, and so I try to throwin parts of who she is. And those are things that only she and I'll know about, unless I do an interview like this, and then I'll share it. But, if you ever look really close, you'll see little details of West Africa in some of the hairstyles.

I know that you started uploading some hair tutorials on Instagram. Do you plan to do more?

I'm gonna do tutorials, but I don't know that it'll be with Issa. I will recreate the look with other models and bloggers, different women. Issa's super-busy, and [the tutorials] came out of a lot of women hitting the both of us up on Twitter and asking for the look to be recreated. She only had maybe like a few hours for us to do it, and it was perfect. So yes, I will recreate the look, it will just be with other models.

NEXT UP
Beauty
Storm Reid Tries Out A Y2K Girl Band-Favorite Hair Trend
Beauty
The Best Beauty Looks From The 2023 Grammy Awards
Beauty
Bella Hadid’s Clip-less Updo Is Going Viral On TikTok
Beauty
No One Does #PamCore Beauty Better Than Pamela Anderson, Herself
Style + Culture, delivered straight to your inbox.