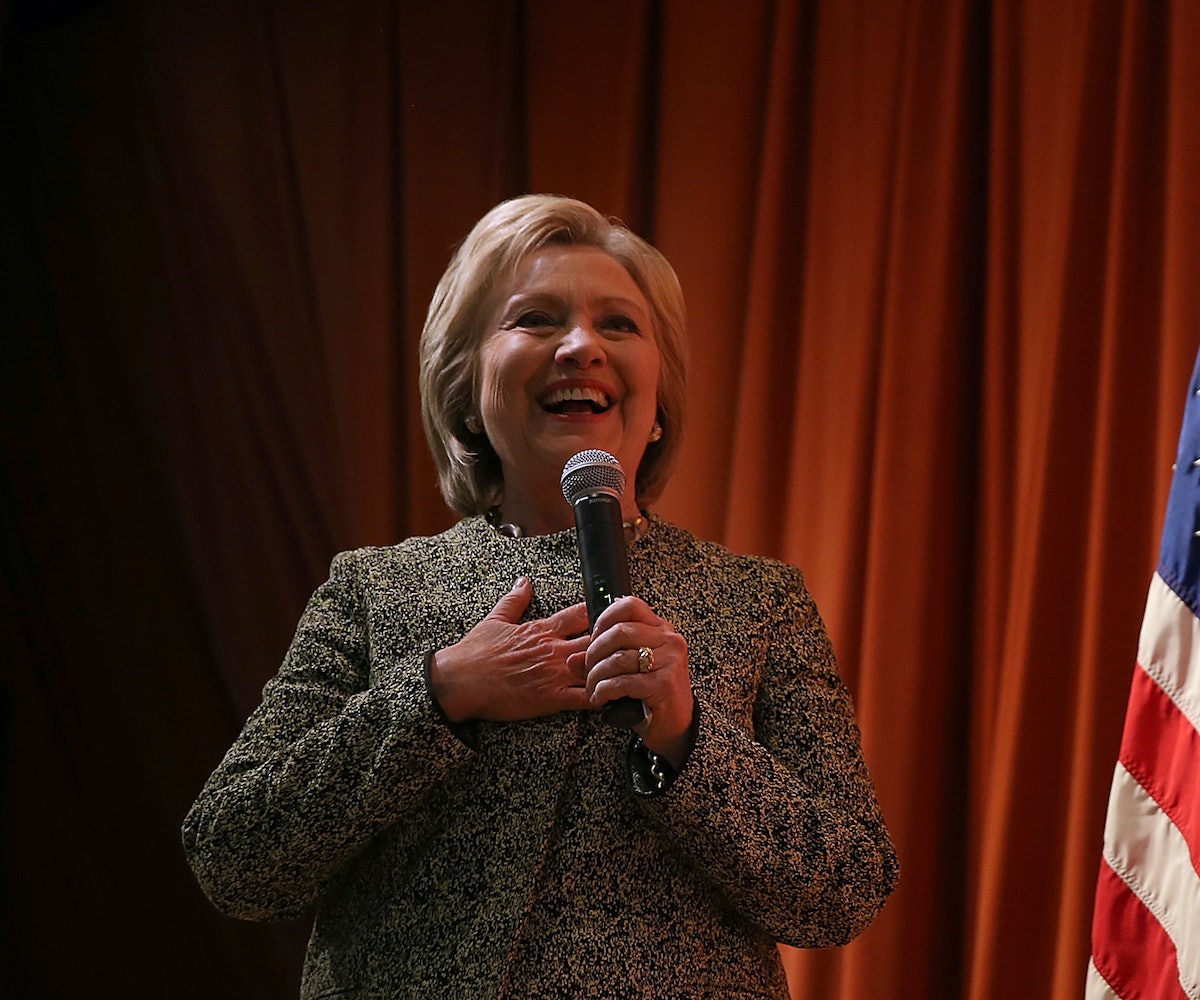 As the race for the ballot between Hillary Clinton and Bernie Sanders for the 2016 presidential election gets closer and closer, we have to pause and once more consider (in spite of any personal political leanings): Could 2017 be the year that a woman takes oath for the presidency of the United States for the first time ever?

Such an occurance is well within the bounds of reality today, but that's not to say that women haven't tried to run for president before. Even before the Nineteenth Amendment was passed in 1919, giving white women the right to vote, there were still female candidates who tried their hardest to get into the Oval Office by advocating for women's suffrage, welfare, and equal pay for equal work. (Not to mention all the other causes and agendas that may not have been on the radars of the straight white men who held not only presidential seats, but also the vast majority of seats in Congress.) And although no woman has completely shattered the glass ceiling to get to the presidency yet, so many women have created punctures, fissures, and cracks in it by holding positions in the House and Senate, fighting to make their voices heard by supporting progressive bills, and keeping on keeping on as activists throughout their lives.

Even before Hillary Clinton reached this milestone for women, there were others who trailblazed and took their fair shots at getting into the West Wing. These seven female politicians are inspiring in their own right.

Victoria Woodhull was the first woman to run for president—but before that, she was a traveling clairvoyant. Just two months after opening the first female-run brokerage firm with her sister, the then-32-year-old began her campaign in 1870 for the presidency with a platform of women’s suffrage, welfare, and an eight-hour work day. Her campaign was badly hurt after Woodhull published an article exposing the affair of a popular Calvinist preacher, Henry Ward Beecher—as a result, she wound up being arrested for libel (although what she wrote was true). She unabashedly critiqued the hypocrisy of Victorian attitudes that condemned women yet allowed men to skirt by without punishment for licentious behavior. A few years after her campaign, she moved to England, and later in life published a magazine, The Humanitarian, with the help of her daughter.

After becoming a widow and single mother at the young age of 22, Belva Lockwood moved to Washington D.C. to (successfully) lobby for a bill that would give female federal employees equal pay for equal work. As she got involved with politics, she also sought to improve her own education. She earned her law degree from the National University Law School—but was not given her diploma until she wrote a letter to President Ulysses S. Grant petitioning that she receive it. After she remarried, she struggled to fight for her rights, yet prevailed in a number of cases: in 1879, she successfully lobbied for Congress to allow women to appear before the Supreme Court. She ran for president under the Equal Rights Party two times, once in 1884 and 1888. Although she did not pull in enough votes, she still made a mark on the country as one of the first major voices of the suffragette movement. Sadly, she died in 1917 at the age of 86, before the passage of the Nineteenth Amendment.

As the first woman to win election to both the House and the Senate, Margaret Chase Smith served as a role model to women who aspired to Congressional seats as she held her own for more than 30 years (she still holds the record for longest-serving Republican woman in the Senate). When her husband, who had been elected as a member of Congress in 1937, fell ill, he told the public that he no of no one more qualified to take his position in the case of his death than his wife. In 1940, after her husband’s passing, Smith announced her candidacy for special election and she became Maine’s first congresswoman. Through her career, she identified as a moderate, supporting naval expansion during World War II and passing a bill to give military nurses full benefits, when they had previously just been considered volunteers. She announced her candidacy for president in 1964, and in spite of not having much support, became the first woman with her name on a major party ballot. In 1989, she was awarded the Presidential Medal of Freedom.

The first woman of color to hold congressional office, Patsy Takemoto Mink is known for her co-authorship of Title IX—the non-discriminatory higher education law that today plays a big role in the fight against campus sexual assault. After experiencing discrimination as she tried to get a job as a lawyer in Chicago in the early ‘50s, Mink moved to Hawaii, where she became the first female Japanese-American lawyer in the then-territory. After serving in the territory’s legislature, she ran for Congress when Hawaii became a state in 1959. Eventually, she was elected to the House of Representatives in 1964. She was asked by a group of Oregon Democrats in 1972 to be their presidential candidate, and although she did not continue her campaign beyond the state’s primary, she is remembered as an impactful and inspiring politician.

Starting out as a teacher, Shirley Chisholm made history as the first black woman to be elected to Congress. In her seven terms in the House of Representatives, she eventually came to work on the Education and Labor Committee (after demanding reassignment from her initial placement on the House Forestry Committee). One of her efforts in Congress was to pass a bill that would provide $10 billion in federal funding for childcare services—but eventually, a cheaper version of that bill was vetoed by President Nixon. In 1972, she announced her presidential campaign under the Democratic party, becoming the first black major party presidential candidate. However, in her run she received little support even from members of her party, not just because of her race but because of her gender. "I've always met more discrimination being a woman than being black. When I ran for the Congress, when I ran for president, I met more discrimination as a woman than for being black. Men are men,” she told the Associated Press in 1982. Still, her legacy lives on and she was remembered as a trailblazer for both Barack Obama and Hillary Clinton as they campaigned for the ballot in 2008.

Running for president under the New Alliance Party in both 1988 and 1992, Lenora Fulani was the first black female candidate not under a major party. Although her poll numbers were not high enough for her to speak in any televised debates, Fulani was the first woman and African American to appear on ballots in every state. Throughout her political career, she fought against the adherence of a two-party system and advocated for independents to have greater ballot access. She co-founded and chaired the Committee for a Unified Independent Party, which convinced Ralph Nader to run as an independent in his presidential bids. Today, she remains an ardent activist.

After serving six terms in the House of Representatives as a Democrat, Cynthia McKinney was nominated by the Green Party in 2008 as its candidate for the presidency. As a congresswoman (and the first black woman to represent Georgia in the House), McKinney was fervent in exploring the events of 9/11, advocating for the victims of Hurricane Katrina, and fighting against the war in Iraq. After losing the election for president, she continued her activist work, particularly speaking out against overinvolvement of the government in foreign conflicts, and against civil rights violations.