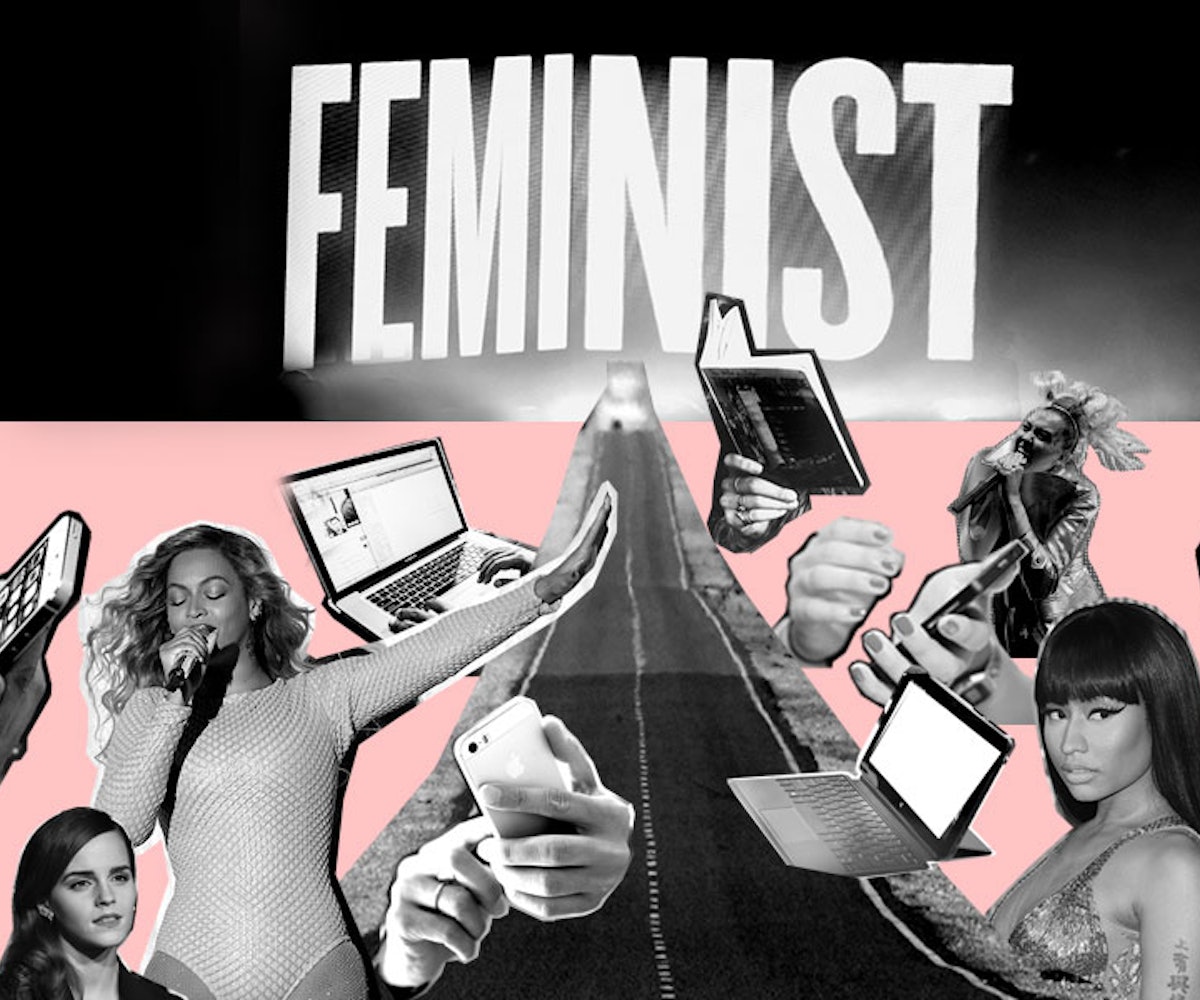 “Feminist evaluations” have become standard procedure in today’s social justice driven, 24-hour news cycle world. No one is safe from judgment. Not Beyoncé with a giant FEMINIST sign behind her. Not Divergent star Shailene Woodley who doesn’t quite identify with feminism. Not the “bad feminist” herself, Roxane Gay. Not the local school teacher, your good cousin, your dad, your best friend’s sister’s cousin’s boyfriend’s brother, not Felicia, and not even you.

It’s sad, really, that feminism is most frequently brought up in pop culture, written about, or discussed (as a term and ideology) when people feel it’s being done wrong. “Anaconda” isn’t feminist song, they say. Is Beyoncé a true feminist? Taylor Swift calls out Nicki Minaj for being problematic. Nicki (rightfully) claps back. The two make up. Miley brings it back up. Nicki (rightfully) claps back. These were arguably some of feminism’s biggest cultural moments this year, and that’s scary.

We need to break out of this shock/anger/reaction cycle, and use what’s left of 2015 to build the foundation for 2016 feminism and beyond. This is not to say that people shouldn’t get upset over white feminism, or with people who (ignorantly or consciously) reject the word "feminism," or that one sexist uncle that we’re already dreading seeing on Thanksgiving. This is to say that fighting and blowing up Twitter maybe isn't conducive to a more inclusive feminism.

Here are four ways that you specifically can break free from the rage and disappointment that so often plagues feminists in this oppressive, male-dominated world.

People and Us Weekly will have us believe that celebrities are just like us. While that’s not exactly true, they are human. Even the greatest humans make mistakes. Sure, Taylor Swift may not be the paragon of inclusive, intersectional, political feminism (see: “Being a feminist is about more than supporting your girlfriends”), but what does it do to constantly critique her every move and action? It ultimately ends with the world criticizing a young woman for not being perfect.

The problem here isn’t accountability; the problem is that for some reason people expect celebrities to be champions of morality and politics, when really, they’re just entertainers (see: Tavi Gevinson’s “on killing your idols”). It’s up to the individual to make the decision not to place the feminism of superstars and millionaires above all else, particularly those who study and live feminism every single day. These celebrities have a responsibility to be positive role models for their fans, because the world still hasn’t taught children (and adults) that they can like something without adopting and modeling it.

What it boils down to is that critiquing every celeb that does something problematic is time-consuming and fruitless, because once one controversy ends another begins. And there we are still wasting time placing people on pedestals and knocking them down.

If you are a female-identified person, the Internet will be much more dangerous for you than it would be for a male. Something as simple as commenting on an article can lead to vicious insults, troll spamming, and even threats. Female-focused sites like Femsplain have been specifically created to be safe spaces for female-identified individuals in an otherwise unwelcoming environment.

Women brave the Internet everyday, particularly on sites like Twitter and Reddit, which offer little to no support in terms of quickly banning sexist, dangerous, and oppressive users. That being said, women are still standing up on the web and making their voices known. It’s a fight that women are clearly winning, because they’re not going anywhere. This does not mean, however, that you must feel responsible to put up a fight for the movement every time you sign in. There’s a “BLOCK” button for a reason.

It can be so tempting to engage trolls and ignoramuses, but it ends up, at best, being a poor way to spend your time, and at worst it can be infuriating or terrifying. In most cases, it’s clear whether the person interacting with you is open to discussion or if they’re just trying to shut you down. If it’s the former, maybe chatting is the right way to go. If it’s the latter, please save yourself the time and energy and just block them. It doesn’t make you weak, and it certainly doesn’t make them right. Only in child logic does walking away from an argument indicate that you forfeit.

3. Remember that feminism is a journey

In our world, feminism is not something most people can learn without effort. The art, media, and education system afforded to the typical American child does not include progressive, intersectional, woman-positive messages or undertones. Because of this, feminism is often something young people learn from other feminists or from specific texts and media products that they consume on their own time.

Some people start early, and others don’t get to feminism until later in their life. It seems silly that people have to find their way towards equality, but our world isn’t built and run by people for whom equality is priority. For those of us who understand feminism and the world in which it functions, it can be all too easy to lose our shit on someone who’s getting literally everything in life wrong.

Maybe they think feminism is for female domination, or that feminists don’t respect stay-at-home mothers. Regardless of the assertion or misconception they’re making, it’s important to remember that there’s a difference between people who are ignorant because they were never taught better, and/or because they never had the opportunities, and those who are willfully ignorant. It becomes a feminist’s job to distinguish between the two (re: #2).

Don’t hold back your feelings and don’t feel like you have to be perfect. It’s okay to get angry once in a while. But just remember those who were patient with you when you were still a feminist baby (unless you literally came out of the womb Glory Steinem). Conversations, even difficult and unpleasant ones, build bridges, while fights and arguments destroy them.

Intersectionality is the key ingredient to an unstoppable feminist movement, because it will unite all women and their allies against a common enemy. No longer will subcommunities be forced to fight their battles alone. In true intersectional feminism, people come together, mourn together, battle together, grow together, hold each other accountable, and most of all, they listen.