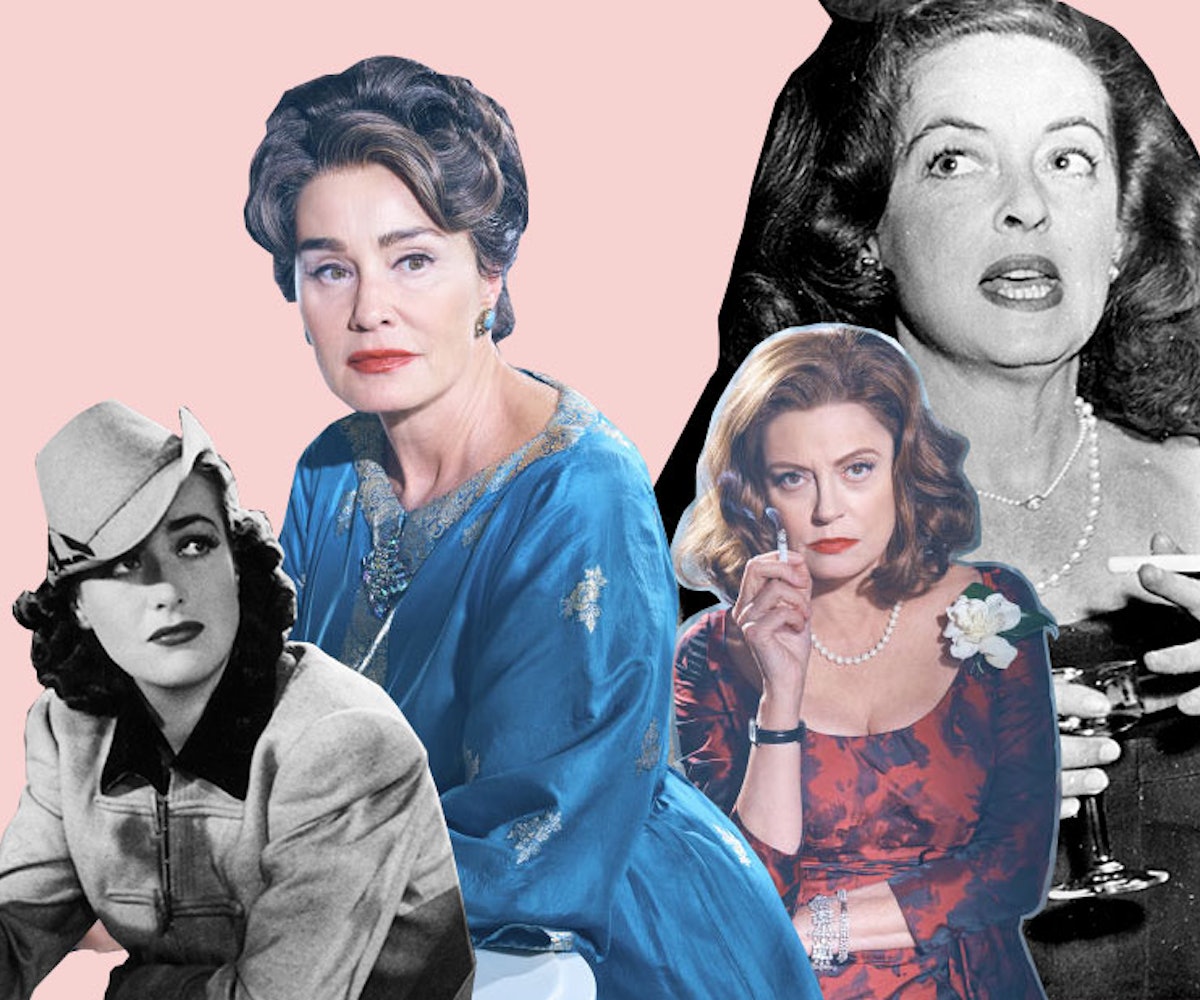 Eagle-eyed viewers will notice that Susan Sarandon is billed first in the opening credits of the second episode of Feud: Bette and Joan after Jessica Lange took first billing for the pilot episode. Which means that they are alternating top billing episode by episode, and that’s a detail that underlines the innate jockeying for position that is built into a career in show business. Only the toughest people survive to have careers as long as Bette Davis and Joan Crawford did, and the same can now be said for Lange and Sarandon.

Lange’s Crawford spends this entire second episode of Feud in a defensive position that forces her to pull every manipulative trick she has ever learned during her years in Hollywood. She starts by forcing director Robert Aldrich (Alfred Molina) to fire a sexy young blonde who is supposed to be playing a next-door neighbor in Crawford’s comeback movie What Ever Happened to Baby Jane? (1962). This girl has insulted Crawford by asking for an autograph for “my grandmother” before cantering off to some appreciative attention from the crew.

With no fuss at all, Lange slowly reveals the murderous steel that underlies Crawford’s velvet glove manner as she simultaneously psyches out Sarandon’s Davis and gets this rival actress on her side. Lange’s Crawford is capable of killing three or four birds with one stone in her best “butter wouldn’t melt” manner, and this skill is especially impressive because Lange has made it so clear in the first episode how vulnerable and insecure Crawford is underneath her dizzyingly expert machinations.

There are some flashbacks to the 1940s where we see Crawford on the set of a dud spy thriller called Above Suspicion (1943) as she complains about the script in a scarily rage-filled tone. “Does this make sense to anyone?” she thunders. (Lange is a virtuoso of anger just as Crawford herself was.) Crawford leaves MGM because studio head Louis B. Mayer won’t let her play the biopic Madame Curie (1943), which went to Greer Garson instead. This is actually the real reason why Crawford left MGM and bought out her contract, whereas in the infamous Mommie Dearest (1981) we see Faye Dunaway’s Crawford let go from MGM against her will.

Crawford signs with Warner Brothers, which puts her in direct competition with Davis, and we see a bit of Sarandon doing the scene in The Little Foxes (1941) where the villainous Regina Giddens sits still and lets her husband die (Sarandon gets the crocodile-like look on Davis’ face in this scene exactly right).

Lange’s Crawford seduces studio chief Jack Warner (Stanley Tucci) by stretching out on a chaise lounge in his office and showing him the bottom of her ankle-strap shoes, which were known informally as her “fuck-me pumps.” In 1973, when Crawford made an appearance at Town Hall, she was asked if she knew the nickname of these shoes that were a staple of her style in the 1940s. “I think I know the first letter… ‘f,’” Crawford said playfully. “But I think, if you remember, they held me up a goddamn long time!”

Aldrich meets with gossip columnist Hedda Hopper (Judy Davis) and tries to make nice, but she isn’t having it. “I think you have me confused with Adela Rogers St. Johns,” snorts Hedda. “I came here for red meat, not pabulum!” (Adela Rogers St. Johns was a close friend of Crawford who was notable as a “sob sister” journalist in the 1930s.) Aldrich reluctantly fans the flames of publicity and tells Hedda that Bette has been complaining about Joan’s falsies, and Joan retaliates by calling Hedda’s rival Louella Parsons to say that Davis looks old and like she has never experienced a happy day “or night” in her life. If there was one place where Davis was truly jealous of Crawford it was in the sexual arena, and so this barb hits home with her.

“I don’t need subtext, Bob, I need good text,” Sarandon’s Bette tells Aldrich as she and Crawford complain about the script of Baby Jane, and this is ironic since the main trouble with Feud: Bette and Joan is how overly blunt the dialogue often is. Another problem is that Sarandon can approximate Davis as a person but she has real trouble when she has to play Davis playing Baby Jane Hudson.

Davis was famous for her emotional volatility, which would strike like lightning (Lange’s greatness also comes from her volatility and the way she can make an emotion like anger seem like an event). Sarandon’s skill set as a performer is far more laid-back and humanistic, with an earthy undercurrent, which is why her best scene in this episode is the one where Davis falls into bed with Aldrich, a more casual interchange where Sarandon can be more like herself than like Davis.

Hedda is outraged to have been scooped, but Joan handles her by confiding that she is broke and in debt, which touches the latent sob sister in Hedda. There’s a funny moment for Davis here when Lange’s Crawford mentions Hedda’s failed acting career and Davis’ Hedda is very unhappy to hear this. (She seems to say, “Wait, what?” as if Hedda has a far more self-serving point of view on why she gave up acting.) Joan sees that Bette is gaining the upper hand with Aldrich, and so she attempts to seduce him, and Lange really catches the anger and contempt that lies underneath Crawford’s sexual survival come-ons.

The relationship depicted here between Davis and her confrontational daughter B.D. (Kiernan Shipka) is rather far from what B.D. herself wrote in her petty and mean-spirited memoir My Mother’s Keeper (1985). This series uses B.D. as a symbol of youth and has B.D. challenge Bette on the issue of her age and supposed irrelevance. The real Davis was suffocatingly proud of B.D.’s attractiveness to men, but B.D. is being used here to advance the heavily underlined feminist thesis of this show, which rings true at times but flattens out complexity elsewhere. Yet Lange and Sarandon and several of the other performers are so expert at playing things between the obvious lines that this series is a testament to how the art of acting can often provide its own show.