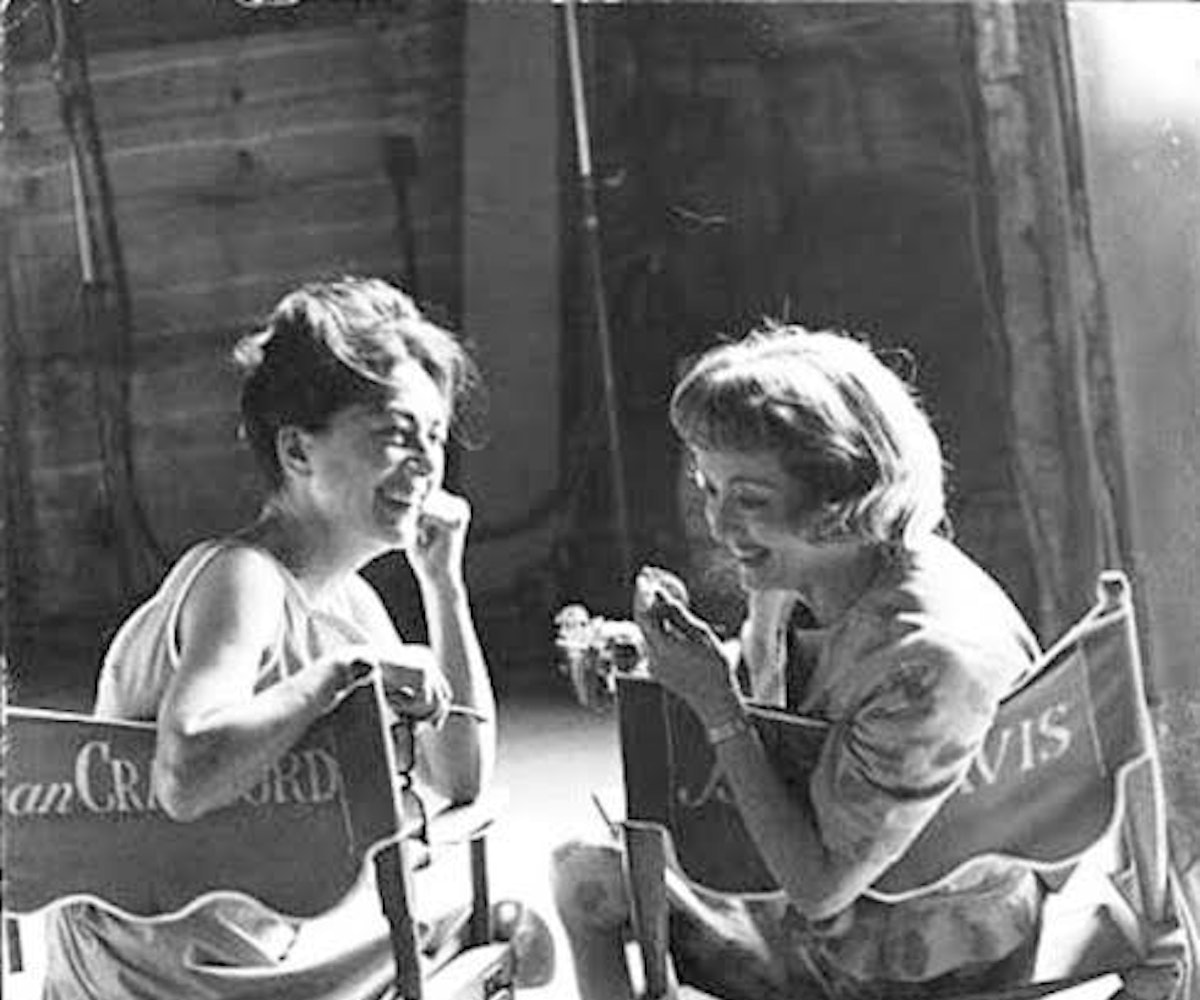 This last episode of Feud: Bette and Joan is bold, imaginative, and often extremely sad, and it sums up the feminist thesis of this show in a sensitively “what if” and clear-sighted fashion. It was written by Gina Welch and directed by Gwyneth Horder-Payton, and what’s particularly impressive is the way they have been able to work in many key pieces of information without overloading the episode or unbalancing it. Both Joan and Bette get nearly equal time here, and the connection between them is finally made convincing and touching.

We see Jessica Lange’s Joan in her Manhattan apartment in 1969 as she cleans floors and dismissively talks on the phone about the success of Easy Rider. (“That Jack Nicholson, is he vaguely cross-eyed?” she asks.) She unhappily watches footage of the Vietnam War on TV, but then her face glows when one of her old movies comes on. Mamacita returns to work for her on a less demanding basis, and Joan is obviously very grateful for this renewed support and company.

Joan is having some severe dental trouble because she had six molars extracted when she was a young girl so that her cheekbones would look attractive on camera. Her highfalutin diction is at its frostiest when a young male dentist tells her that she should worry more about her health rather than her appearance. “I’ll stop worrying about how I look when they dip me in formaldehyde,” Joan tells the dentist, and this is clearly an area where Lange identifies with Joan.

In her late 60s now as Joan was at that time, Lange has made it clear that she still wants to look her best and she still wants to play roles where she can dip into her potent store of sexuality. Joan got mocked in the 1960s for that same urge, but creator Ryan Murphy has allowed Lange to present herself as a fully sexual being on American Horror Story in ways that feel both robust and persuasive. So there might be a case that some little progress has begun to be made since Joan’s time in show business.

Joan’s agent advises her to turn down a monster movie she has been offered, but Joan likes the idea of playing a scientist. “I had dreamed of playing Madame Curie,” she sighs. When she shows up on the set of Trog (1970), the lowest point of her career and her last feature, Joan needs all of her considerable powers of self-deception to endure being made to change her costumes in a shabby car while playing opposite a man in a furry mask. Jim Morrison sings “The End” on the soundtrack as filming on Trog is cross cut with Joan dictating her lifestyle book My Way of Life, and this juxtaposition is very unsettling and sad, but it’s only a warm-up for a scene where we see Joan alone on the Trog set late at night.

Trog is a humiliating comedown for Joan, yet she loves making movies so much that she doesn’t even want to leave the set. In the middle of the night and all alone on the deserted soundstage, Joan sits down on the floor with the mask that the creature wears. (She has been practicing her wordy scientific lines, which she has had trouble remembering.) Joan looks at the mask, and then she slowly starts to put it on, and this is a huge risk, this moment, because if it didn’t work it would get a laugh. But Lange puts this mask on in such an exhausted, desperate, and sweetly childlike way that I teared up watching her do it. It’s a tragic moment that is followed by a scene where Joan decides that she will not be seen in public anymore after unflattering photos of herself and Rosalind Russell are printed in the newspaper.

The story shifts over to Bette, and we see how many pilots she shot that were never picked up for a TV series. Susan Sarandon’s Bette complains to Victor Buono (Dominic Burgess) that Katharine Hepburn is playing Edward Albee and Tennessee Williams while she has to accept any crappy role because she has to pay for her daughter B.D.’s family. “Am I not every bit her equal?” Bette rightly asks of Hepburn. She tells of her hurt because Hepburn would not pose with her for a shot in Life Magazine. (This occurred in 1985 rather than the early 1970s, but it did actually happen and Bette was indeed hurt by it.) Bette is coughing and having health problems of her own. “I can’t give up cigarettes, they’re my only friends,” she tells a female doctor.

Bette endures shooting a TV movie called The Disappearance of Aimee (1976) where her co-star Faye Dunaway keeps everyone waiting on the set for hours. (Dunaway is wisely not shown on screen here.) Suddenly Joan starts to look pretty good to Bette after she has to put up with Dunaway’s lack of professionalism, but Bette tells Buono that she can’t admit this in public. “It’ll cut my talk show appearances in half if anyone thinks I’ve gone soft on Crawfish,” she says. Buono tells Bette that Joan is ill with cancer and that she should call her, and Bette dials Joan’s number but she can’t go through with talking to her.

Joan’s adopted daughter Cathy comes to visit with her own two children, and Joan says that she knows about the vengeful book that her eldest adopted daughter Christina is writing about her. Joan is enormously grateful to have the love of Cathy and her grandchildren, and she doesn’t even mind that the kids are scuffing her floor, which means that Joan has finally moved past her limiting obsessions with perfection and cleanliness. Lange is very touching in this scene, which is based on the memories of Crawford’s grandson Casey LaLonde, a steady guardian of Joan’s legacy in recent years.

Joan gets out of her sick bed and walks into her living room for a lively and very enjoyable hallucination/fantasy involving Judy Davis’ Hedda Hopper and Stanley Tucci’s Jack Warner, who are soon joined by Bette. Joan looks at Bette and asks, “Why I am so happy to see you?” And Bette answers, “Nostalgia.” This is the toughest and the best bit of writing that this show has ever had. They really have saved the best for last.

Mamacita comes in and breaks the spell, and Joan has a moment where she realizes that her hair is long and grey that allows Lange to make a gesture that suggests a movie Queen Lear being led away by a loyal Fool. When Bette is called for a quote after Joan’s death, she knows what is expected of her. “My mother always said, ‘Don’t say anything bad about the dead, say only good,’” she tells a reporter. “Joan Crawford is dead… good!” This is a hilariously mean line, but Sarandon lets us see that it is just meant for show and not sincere, and she wisely doesn’t oversell this conflict. Because of Sarandon’s restraint, real sadness emerges here.

And that sadness gets doubled when Bette finds letters from her mother Ruthie Davis and realizes that Ruthie hated and resented her. “My own mother,” Bette tells her adopted daughter Margot. “I thought she was my only friend, but actually, I was totally alone.” Break out the handkerchiefs, because Sarandon really kills in this scene. The sadness here and the connections between the various sadnesses on display become nearly overwhelming, and yet Welch and Horder-Payton manage to control all this sadness and not let it get out of hand.

The series closes at the 1978 Academy Awards, where Bette refuses to talk to a documentary filmmaker about Joan, and then it ends with the first day of rehearsal on the set of What Ever Happened to Baby Jane? where both Bette and Joan were photographed talking and laughing together in a way that suggested that they were making some kind of contact and connection. Then again, Bette and Joan were two of the greatest pretenders and stars of the twentieth century, and so that calls into question any emotion that might be called “genuine.”

Somehow the various problems that plagued Feud: Bette and Joan fall right away in this climactic episode because the writing by Welch really understands the heartache and the waste of this last period in the lives of these two women. This is a series that got many people excited again about Davis and Crawford, and it also won them some new fans. (I loved seeing the young women and young gay men posting online about seeing Davis and Crawford movies for the first time because of this show.) But the last episode also interrogates that fandom in a scene where Joan is selling My Way of Life and dismisses a young female fan and a young gay male fan for their facile response to her and their lack of understanding, which serves as a call to look deeper at who Crawford was and what she achieved.

As a project to try to undo the damage done to Crawford’s reputation by both the Mommie Dearest book and movie, Feud: Bette and Joan is an unqualified success, particularly in the excellent and believable scene that Joan has with Cathy and her grandchildren in the last episode. Christina Crawford’s version of Joan and Faye Dunaway’s semi-monstrous take on her can now be balanced by Lange’s very sensitive, poignant, and layered investigation into what created this many-sided woman with no center. Sarandon found it difficult to let go of her own inherent cool and moderation as Bette, but she let real grief flood into her own large eyes in the late scene where Bette realized that her own mother didn’t like her.

Bette and Joan only made one movie with each other, yet they are still tied together in the public imagination and are likely to remain that way. They had more in common than they wanted to admit, but their differences were so crucial that these differences animated a feud that was sometimes very real, at least at the 1963 Oscars and on the set of Hush, Hush…. Sweet Charlotte. Could they have been friends? Probably not, because they had no talent for friendship with anyone.

But should Bette have picked up that phone and called Joan on her deathbed, as she does in this last episode without following through? Yes, and she should have spoken to her, because the rivals that you hate most in life are the ones you miss most and nearly love when they are gone. And that understanding animates this last episode of Feud: Bette and Joan to an acute degree.

There is very little camp value in this series, and this disappointed some people, but it winds up being a real heartbreaker, just like Bette dying at the end of Dark Victory (1939) or Joan walking into the sea in Humoresque (1946). And surely on that honest tearjerker level, Feud: Bette and Joan is a series that Bette and Joan themselves would have appreciated.