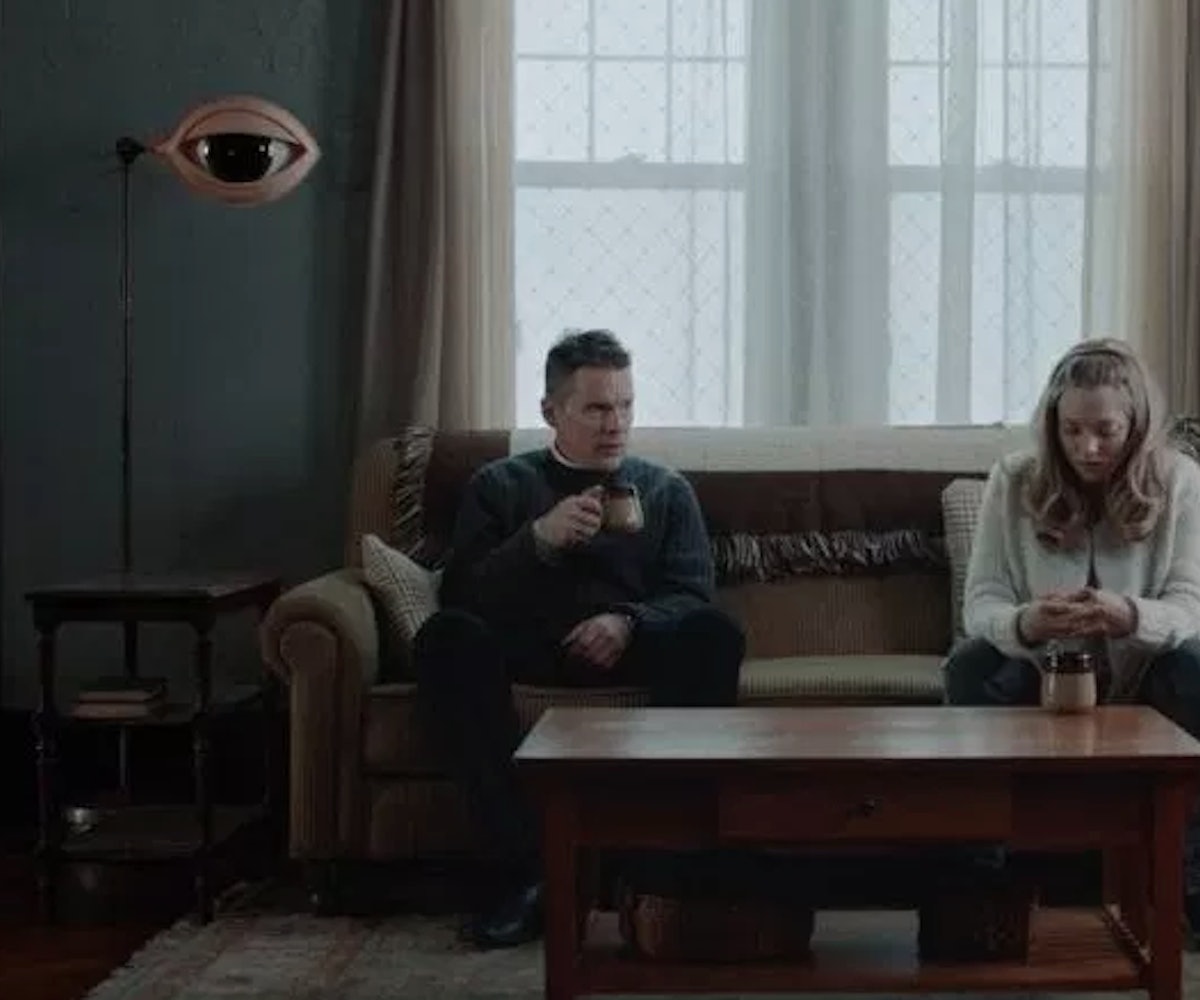 Raised in a strict Calvinist household, the writer and director Paul Schrader famously didn’t see a movie until his late teens, but before he was out of his 20s, he’d written the two texts that serve as a Rosetta Stone for the work he’s done since: his screenplay Taxi Driver (1976), a fervid portrait of fear, loathing, and one man’s warped, devotional obsession, and the book Transcendental Style in Film, a critical study of the spiritual and cinematic in the directors Yasujiro Ozu, Carl Th. Dreyer, and Robert Bresson. Bresson’s Diary of a Country Priest (1950) is referenced throughout Schrader’s amazing, graceful new film First Reformed, from the moment Ernst Toller (Ethan Hawke), a priest in Upstate New York, begins keeping a diary. In other ways, though, the former military chaplain Toller is more similar to another diarist and war veteran, Taxi Driver’s Travis Bickle, self-described “God’s Lonely Man.”

First Reformed, the spartan white wood-frame church of the title, is a centuries-old parish serving a dwindling community of regulars, and a steady trickle of tourists and schoolchildren; it’s now part of Abundant Life, a megachurch run by Reverend Jeffers (a charismatic Cedric Kyles, better known as Cedric the Entertainer, who Schrader says he cast to break down the audience’s natural tendency to stereotype evangelists as smarmy hypocrites). Grieving the breakdown of his family, Toller is called forth from his lonely, alcoholic nights by Amanda Seyfriend’s pregnant Mary. Seyfried was indeed pregnant at the time, and, Schrader believes, was particularly drawn to the heavy, almost apocalyptic subject matter.

Mary’s husband Michael (Philip Ettinger) is increasingly despairing of bringing a child into the world—he’s an environmental activist who, like David Buckel, has profound doubts about the morality of human existence given our mistreatment of the natural world. In a great debate scene with Toller, Michael sounds dangerously like a crackpot, simply by stating verifiable facts about the effects of pollution and the accelerating unsustainability of life on earth.

Michael’s cause increasingly becomes Toller’s own as First Reformed’s 250th-anniversary celebration looms, whose festivities are underwritten by local country club titan of industry and world-class polluter Balq (Michael Gaston). At the same time, Toller’s bond with Mary becomes his lifeline amidst ill health, drinking, and deep depression. Schrader’s 20th theatrical feature as a director, First Reformed is equally engaged in urgent political questions and timeless moral dilemmas; it synthesizes the elevated heights of the Euro arthouse canon with lived-in regional Americana, and is equally a portrait of pathology and a plea for transcendence. Stately and then sometimes miraculous in its visuals, and classical, subtle, and incisive in its storytelling, First Reformed has since its festival premiere last fall been hailed, correctly, as a major American filmmaker’s career-capping masterpiece.

Schrader, always a voluble interview subject, sat down with me a few days before the film’s opening.

The relationship between Toller and Mary reminded me a bit of Taxi Driver, which was already a very self-aware and critical take on the dramatic trope of the damaged, questing man who sees a potentially vulnerable woman as somebody who, through helping her, he can maybe redeem himself. Since we’re in the midst of a cultural moment of reassessing narratives in which women’s experiences are treated as incidental to the greatness or flaws or dramas of men, I wondered if this dynamic was something you found at all tricky to depict. How do you honor Mary’s experience, in Toller’s movie?

She’s a parishioner in need, you know, and that's one of the things he does. He has only a few things that are keeping him together: alcohol, a journal, the liturgy of the church, and talking to people where he can actually be a counselor. She is a person in genuine distress, and he does not impose himself in her life—it's really coming from her. She's the one who says, "I'd like to take a bike ride." When she spontaneously holds him toward the end, he just freezes up, so that otherworldly burst of passion and carnality comes just like a thunderbolt.

There’s an interesting depiction in the film of someone who is radicalized through the internet. Toller reads all this stuff about climate change, progressively more and more radical, like he’s watching YouTube videos of a cleric’s lectures, or posting in an incel subreddit or something. Do you feel like Being Online has affected you, politically or socially?

But, your point about him being radicalized is an interesting one, because I’m not sure what happens. I’m not sure whether he doesn’t just catch that boy’s virus. Would he have gotten there on his own? Does he just need this important mantle to wrap his suffering in? Because suicide is a sin, condemned by the church—unless you're Sampson, and then you can bring the temple down on top of you. And so, he's no longer just a selfish suffering priest who’s drinking himself to death. He's now carrying the weight of the world on his shoulders. There's a great temptation in Christianity to confuse Jesus’ suffering with your own.

I find, in my own online interactions, it’s sometimes hard to walk away and not carry a residue of that concentrated anxiety and anger—and I think a lot of people have caught that bug worse than me. And so watching Toller doing something that I know people of all ages do, which is sitting at a laptop, drinking, and getting progressively more and more enraged about the state of the world [Schrader laughs], and something has to be done immediately… In addition to messianic, it did seem more generally modern.

Richard Linklater told Ethan [who starred in Linklater's Boyhood and the Before trilogy], "You know, no one’s even tried to make this movie in 60 years. But, for such an old movie, it feels very of this moment. And I can’t quite explain it. And for a movie that’s just full of talk talk talk about abstract issues, it doesn’t feel boring... and I’m confused by that." [Laughs]

This is maybe a moment in which people, at least on my feeds, are speaking quite casually about labor and compromise under late capitalism, which, actually, brings me to First Reformed and the megachurch. The film creates this dichotomy which is also a historical progression, from a forbidding, self-denying, patriarchal, but also deeply devout, strain of Protestantism into something that’s diverse and accessible but also entrepreneurial.

There’s a lament about the loss of this more ancient, Dutch Puritan-derived [Schrader chuckles]—what’s lost?

See, I go to church. And you don't walk out of church because you're bored. You go to church to be bored. I go to church to be bored. You set aside an hour, an hour and fifteen minutes out of Sunday morning, just to sit there, collect your thoughts, listen to the music, maybe listen to the sermon, maybe not... and it organizes the week. The same thing can be said of meditation—you can do that on a Sunday morning, too. Or what the Quakers do, where they just sit around, which is a form of meditation. So, I find that very helpful. That is where I think holiness resides: In the waiting, in the quiet places. I don't think it resides in the entertainment arenas.

And the megachurch is also more resigned to worldliness, especially economically. Both Jeffers and Balq seem like people who, to whatever degree of introspection they possess—and I think one of them’s definitely more introspective than the other—have internally wrestled with the contradictions of whatever convictions they have and the day-to-day pragmatics...

Jeffers is the CEO of a large organization. He lives in the world, and he tells Toller, "You don’t live in the real world." And he doesn’t. “You're a minister at a tourist church no one attends.”

That’s interesting, because one of the ways in which the film is modern, I think, is that it shows people who are resigned, to greater or lesser degrees, to... capitalism. Another thing I keep coming back is to the repeated line in the film: “Will God forgive us?” And the difference between those characters who live in the real world, or claim to live in the real world, and Ethan Hawke's character, is that they seem to have decided that whatever shame and pain they have wrestled with, that that internal struggle is penance enough. And Toller is telling them that we don’t get to forgive ourselves. It also made me think of the many public difficult men who are currently performing public acts of contrition [Schrader laughs] and then expecting to go out on comeback tours immediately afterward. Because they have forgiven themselves.

Yeah. Well, the smartypants answer to the question, “Will God forgive us,” is... he has to. That’s his job. That's why we made him. [Laughs]

But that's not what the film says!

First Reformed will be in theaters on May 18.