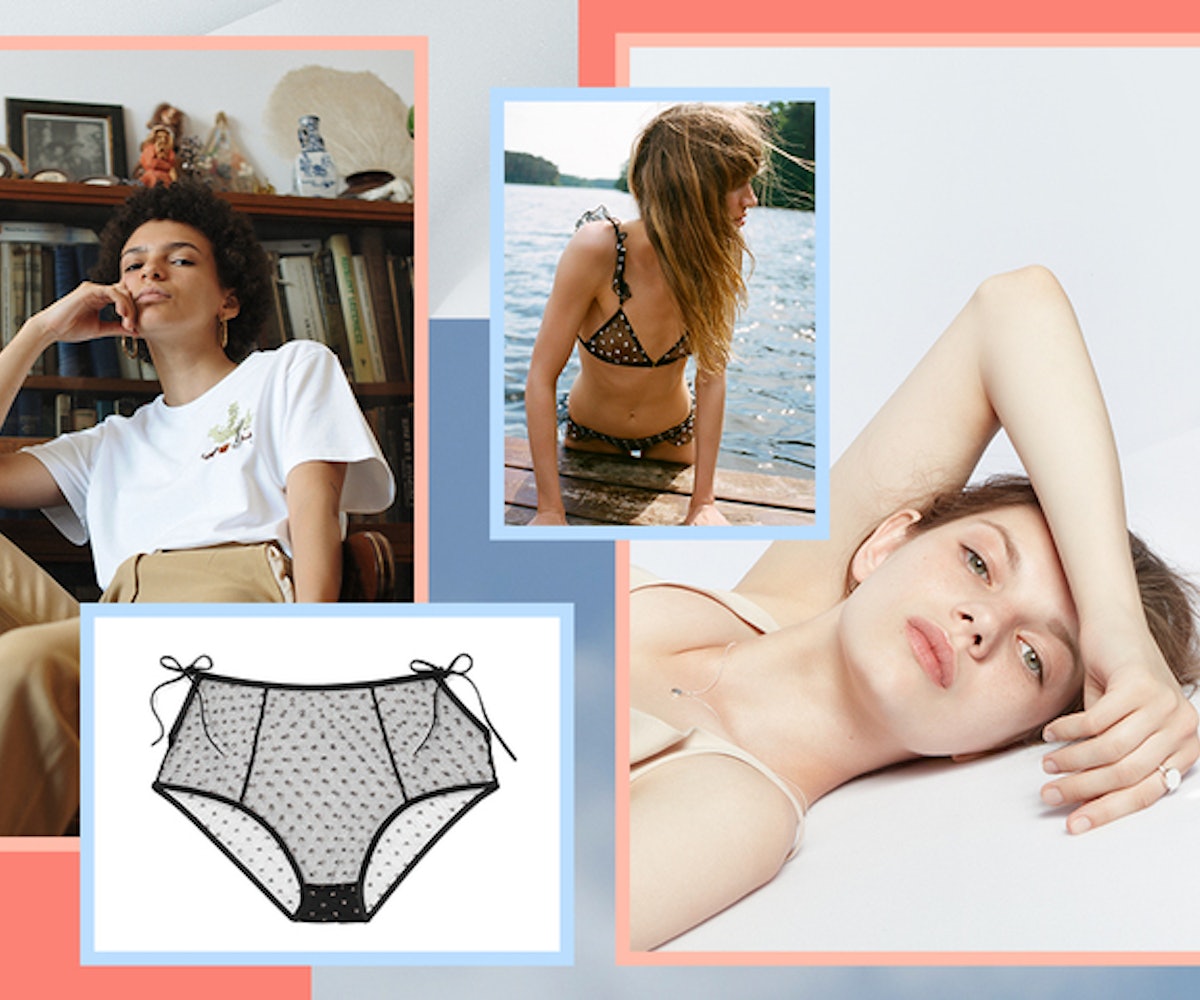 Although it’s hard to believe that, even in the age of the internet, anything can be overlooked, somehow Poland has never quite gotten its due as a unique voice in the fashion world. We already know the country’s capital city makes a worthy vacation spot, but, in recent years, Warsaw-based designers have made a compelling case for being a capital of easy-to-wear women’s fashion. They're well aware that with an eye cast toward both functionality and details, there’s no need to sacrifice style in the name of practicality. From underwear to overwear and accessories, we’ve rounded up five designers changing the way Polish women view getting dressed in the morning. And with all of them offering worldwide shipping, they’ll likely top your fashion wish list as well.

When Zuzanna Gasior started her lifestyle blog, This is Paper (a sly reference to the disappearance of physical magazines), she saw it as a place to celebrate her love for photography, fashion, culture, and architecture (a subject she studied in school). Little did she know that not only would her ones and zeroes manifest themselves into an actual English-language paper magazine, but also into physical products. Today the company’s airy, minimalist-chic Warsaw storefront has a small corner dedicated to pressed juices and cold brew tea (another passion), but the main focus is on the bags—a subject the brand knew little about when it started manufacturing in 2011.

“I know it sounds foolish, but we started with the bags because we thought they’d be the easiest,” Gasior confesses. “At the beginning, we were looking definitely into visuals. I think it was a little bit of a mistake for us. But somehow we found our way. Right now, it’s definitely less fashion and less trends. It’s more into quality.”

Today, This is Paper has split the difference, their olive, black, taupe, and, white bags equal parts attractive and functional. Straps on over-the-shoulder bags lengthen to allow them to be carried across the body. A large duffle bag has hidden backpack straps and a side pocket for easy access (a favorite for travelers). Structural leather exteriors provide rain protection. (For those who prefer, they also have fabric options.) It’s the kind of sturdy practicality that’s unlikely to go out of fashion, regardless of trends. Which, as Gasior points out, is exactly what they’re attempting to create.

“Right now, we’re concentrating on design, like, ‘This bag is for everyday life,’” she explains. “You bring your little things. You have to fit this and that in. We’re more into thinking about function. The thing with clothes, it’s a bit different. When you have your clothes, you can buy a jacket—three or even five of them in one season. But when it comes to a bag, if you have something functional, it can last through seasons.”

Monika Mularczyk studied fashion illustration in England, painted for fun, and interned at Elle Poland. But it wasn’t until 2016 when the multidisciplinary artist taught herself how to embroider via YouTube, and made shirts for a few girlfriends, that she found her calling.

“I didn’t find my job really challenging, and I wanted to do something else,” Mularczyk recounts. “I didn’t have an idea, and I was looking to work with other designers, but I thought I’d end up in the same place, giving a lot of myself and not being able to do anything more. I thought maybe it’s a good time for a change. It started quickly.”

To keep things fresh, Mularczyk introduces embroidered designs frequently and plans to retire certain shirts as she continues. (“It’s going to be more unique if you stop doing them after some time,” she explains. “Not like H&M or Zara and do them all the time and have massive amounts of them.”) Currently, MOMU has 12 t-shirts available, from her first-ever design, the image of a young girl with her houseplants and cat, to English-language statements about the state of feminism and politics in Poland. (Spoiler alert: Some struggles are universal.) In the future, Mularczyk hopes to extend her simple yet striking designs to jackets and pants and dreams of seeing her work worn by some of her favorite actors, like Gillian Jacobs. But for now, she’s excited at how far MOMU has come in only a year.

“People started talking about it, and I had orders straight away,” she says. “I was really surprised. Actually, I had more orders than I could do at the beginning. I was worrying to my boyfriend, ‘What if nothing is going to sell?’ He replied, ‘What if you sell everything?’”

In the three years since she started her clothing line, Belle, Magdalena Nowosadzka has become enamored with practical femininity—an idea that comes across in every one of the former philosophy student’s sleek and simple shifts, T-shirt dresses, and skirts.

“I want a girl to be a girl, but in a comfortable way,” she explains. “Not something that makes you posh or makes you feel like you’re not you. They’re clothes for every day. Not for a special occasion… I try to design clothes so they’re not too sexy. You can wear them to work.”

Necklines are elaborate, but high enough to remain work-place appropriate. Silhouettes are tailored, but roomy enough to allow for movement. And fabrics—mainly cotton, wool, and linen—are in muted colors, generally solid or stripped. (Although on the day of our conversation, Nowosadzka’s wearing an elaborately patterned brocade jacket, which became a surprise addition to her collection after she fell in love with the fabric.) It’s an idea of simplicity that carries through to the company’s photo shoots, often with friends in front of the camera rather than professional models. Currently, Belle releases two lines a year, which means Nowosadzka’s style evolves slightly with the weather. But even though the designer is looking to introduce new ideas into the mix, her core style remains.

“I want to have the core be pleated textiles,” she says, dreaming out loud. “A lot of black clothes. But a little bit of color. Green and blue, I think. I want to design prints as well.”

“Le Petite Trou” is French for “the little hole,” something you’ll find in each of the three-and-a-half-year-old company’s signature briefs. What you won’t find is excess lace or any kind of frill that will impede movement. (Real talk: There’s nothing sexier than knowing you won’t have to pick a wedgie every time you dare to walk down the street.)

“The whole idea is French,” explains sales manager Katarzyna Partyka. “The French don’t take themselves too seriously. That’s what pulls it together and makes the whole identity work. It’s sexy but not too out-there. It gives a little taste. Something that stands out… We don’t want our model to be too sexy or make poses. She makes coffee. She eats. Because that’s what she does on a regular basis. That’s the whole idea of the brand.”

Although they generally create panties and bralettes in black and beige (a color that, as Partyka rightly points out, looks great on tan skin), Le Petite Trou recently branched out to create pink sets—although with fabric this cute, matching top and bottoms aren’t necessary. Also new to the fashion house's stable are bodysuits and briefs featuring hearts and small cutouts. (Pro tip: Le Petite Trou also has an ongoing line of soy candles, massage oil, and house slippers, just in case you’d like to surround yourself with its sensual chill aesthetic.) Thanks to their packaging, which rivals Apple for its well-thought-out design, women aren’t the only ones who appreciate the burgeoning company’s worldview.

“We have a lot of clients that are men,” notes designer and founder Zuzanna Kuczyńska. “They’re buying a box with the lingerie because they don’t have to do anything else. They just grab it and give it to the ladies. It’s very easy to buy from us because of that.”

Elena and Janek Lewczuk studied industrial design in Warsaw, at the Academy of Fine Arts, and even though you’ll find several hand-designed chairs in the couple’s home-turned-showroom, their main focus these days is jewelry.

“The name means something simple, without any unnecessary additions,” Janek says of the brand's name. “Just pure forms. Pure forms and function. It’s phonetic from French, a word that means without additions. It’s just a simple name.”

It’s an idea that’s carried through their work. Constructed primarily in silver and rose gold (although due to its ongoing popularity in Poland, yellow gold is also available), their jewelry boils down to lines; their first line, Tension, played with classical jewelry standards like the single setting stone ring (which as Elena points out, is completely customizable.) Their newest offering, Tempo, brings movement into more traditional pieces. Pendants can be moved on their handmade chains, and their slender rings feature tiny beads that can be rotated and moved around. It’s the idea of bringing a touch of magic to daily life that Elena and Janek appreciate the most. Why have a necklace or ring if you only wear it for special occasions?

“In jewelry, a lot has already been said,” says Janek. “So if you like to create new objects, you need to have a fresh concept to create. It’s something special about jewelry, and it’s different than other areas of design. Furniture is form and function as well. But jewelry is more form than function. It’s just form. It makes us happy. That’s function—to me. It’s a special area.”