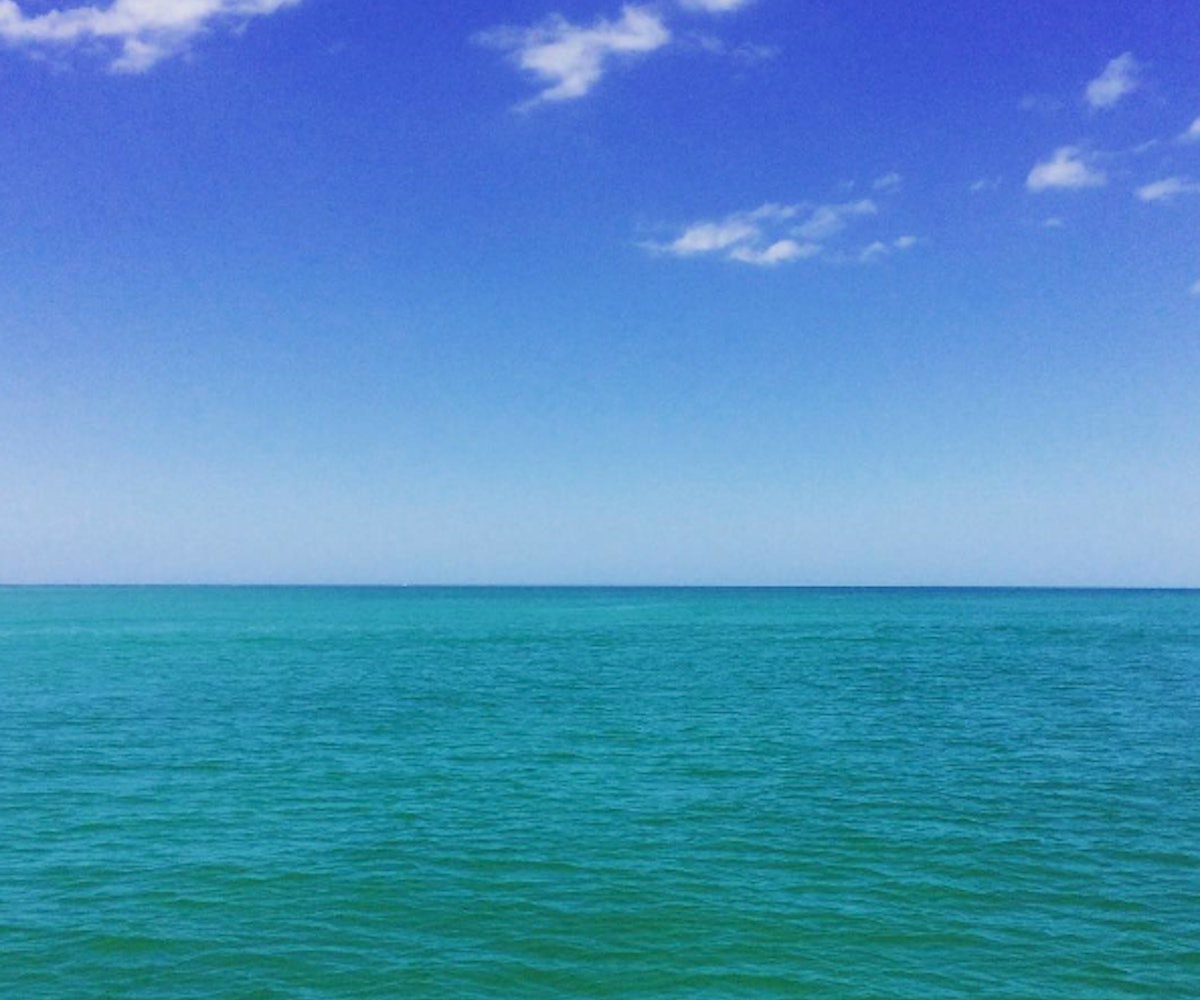 The ocean was warm as blood but a whole lot more blue. The sky was as blue as the center of a flame and just as hot. I was on a boat, in the middle of both these elements, water and air, warm and hot; I was looking for manatees.

The boat captain had lightly mocked my search: "Manatees aren't all that exciting. It's just like seeing a thousand-pound baked potato flopping around in the sea."

He said this and I thought to myself, I've never been more excited in my life.

But there would be no half-ton tubers in my immediate future. The water was still, even as we were moving fast through it. (Well, not fast while we were in manatee territory, obviously; the captain's disinterest in manatees did not mean he was murderous toward them.) There had been other animals though. There was a dolphin, playfully nudging about the area from which my sunset kayaking group was set to launch; we would also see herons, egrets, whelks, and teeny tiny tree crabs which looked like gnarled knobby bumps on the mangrove trunks, until they started to skitter up and down, at which point they looked like spiders. It was, I thought, cool. I didn't see any alligators, though heard tell of them, and had one Sanibel local tell me about the eight-footer who liked to hang out by the pool in his backyard.

This was the trip to Florida upon which I'd decided: Florida is a fever. The state sneaks up on you. It's easy to feel something like a frog must feel, as it sits in tepid water that incrementally gets hotter and hotter until it is boiled alive. Only: What was gradually increasing for me was not the specter of death, not exactly (not, you know, at all), but rather a sense of abandonment. I was working to leave behind any ideas I had about Florida as being one of the few things most New Yorkers assume that this state, with its hundreds of miles of coastline and seemingly infinite types of wildlife (of both the human and non-human variety), is all about, namely: extreme weather, extreme partying, and extreme behavior.

I headed into Florida, then, for a long weekend in Fort Myers and Sanibel Island, with an open mind, ready to collect shells, eat cheeseburgers on the beach, and, of course, to see manatees. And I headed to Florida ready to find something to write about Florida, ready to find all sorts of great things to say about Florida. Like how it's a fever and how the water is warm like blood and how the ever-encroaching wildlife makes it seem like nature is eating at the edges of civilization, even as civilization works hard to maintain its manicured veneers, with the whole cycle repeating itself over and over again, the air around it taking on the damp aroma of a just-cut open, overly ripe papaya, something in between pure sugar and unwashed feet.

This doesn't mean that the rest of us shouldn't go to Florida and find stories of our own, rather just that we should go with an open mind about what it is we're going to see, and not try and force our expectations of what Florida is supposed to be upon a state that laughs in the face of those expectations and then chews them up and spits them out, so that you're left wondering if all the things you thought were just something you dreamed, in some feverish state, one you're not sure is too good for you to linger in, but one to which you'd still like to return.

Below, in preparation for any upcoming Floridian adventures, are some of my favorite books about Florida, which are all a good way to get to know the state as more than just a stereotype.

Sunshine State by Sarah Gerard: Gerard's essays range from the personal to the reported and all offer different angles on things familiar to most of us—friendships, family... pyramid schemes—making the ordinary seem extraordinary, the wild seem within our reach.

Their Eyes Were Watching God by Zora Neale Hurston: Simply one of the most provocative stories of love and independence ever written, Hurston's novel also reflects the push and pull between a woman and a society that wants to make her acceptable—digestible—even, or especially, if that means consuming her in the process.

Devil in the Grove: Thurgood Marshall, the Groveland Boys, and the Dawn of a New America by Gilbert King: The only book on this list not written by a native Floridian, King's Pulitzer Prize-winning look into the horrific history of racism in Florida is essential for understanding the troubling past—and present—of this complicated state.

Tampa by Alissa Nutting: Nutting's debut is darkly hilarious and centers around a 26-year-old teacher who lusts after her 14-year-old student. It is not about Florida, exactly, but it's not not about Florida. Also, keep an eye out for Nutting's forthcoming, brilliant Made for Love, which involves a man who kinda looks like Jesus and has amorous feelings for a dolphin. What's more Florida than that?

The Orchid Thief by Susan Orlean: Go deep into Floridian swamps and the people who work and dwell within them in Orlean's completely captivating, heady-as-an-orchid account of the rare ghost orchid Polyrrhiza lindenii.

Swamplandia! by Karen Russell: There's enough gator-wrestling and encroaching wildlife in this novel to transfix the biggest Florida fanatic, and Russell's prose sings with a lucidity not dissimilar to rays of sun cutting through mangrove forests, falling with a stunning clarity atop the murky waters running below.