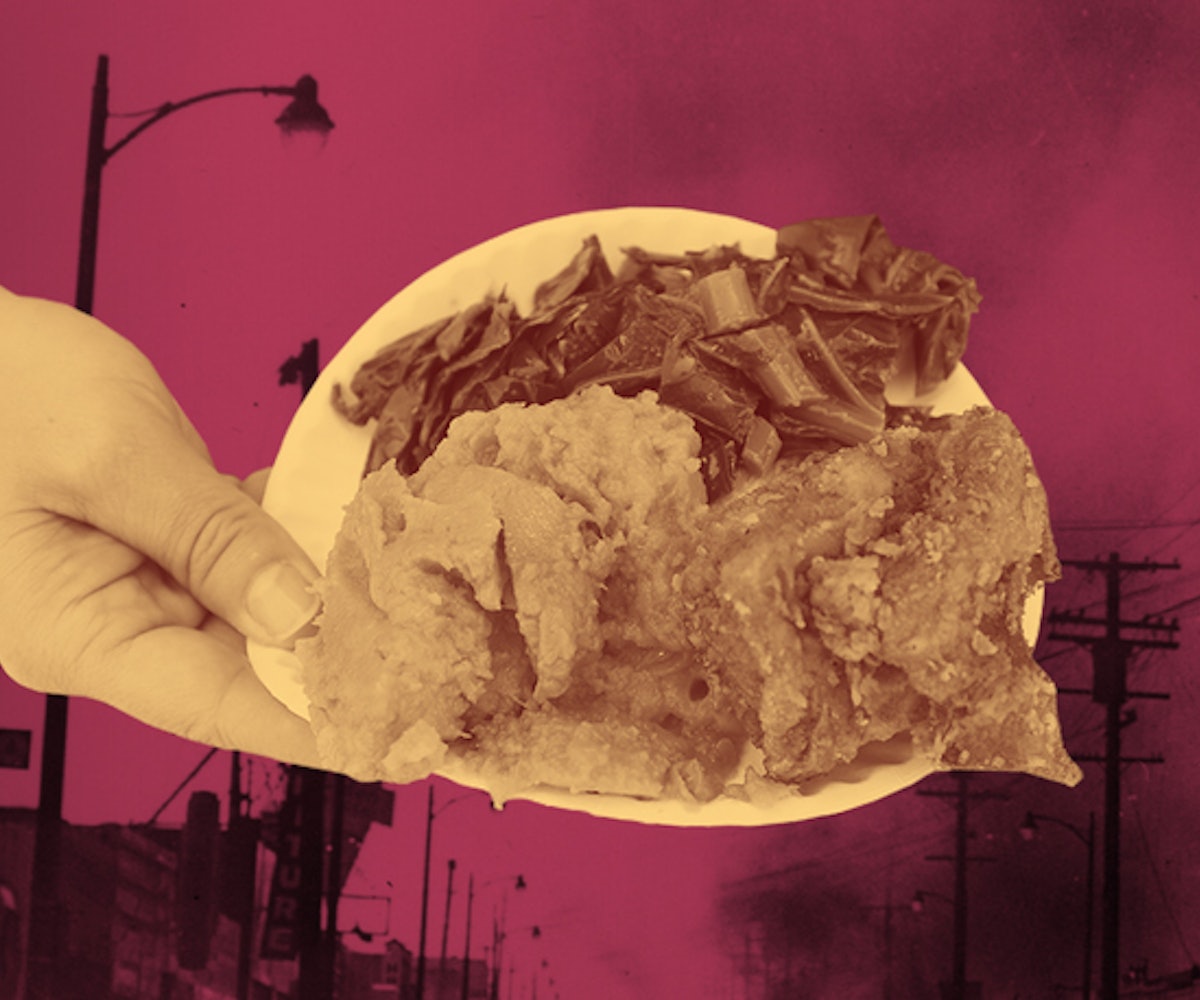 "We serve comfort food to those who need comfort. And we do it with our own hands."

That was the line that made me fall in love with the television show Queen Sugar. Delivered by Nova (played by Rutina Wesley), it was meant as an admonishment to her younger sister Charley after Charley hired caterers for their father's repast, the meal served before a funeral. It reminded me of the death of my aunt, and the way we served food to guests in our backyard; although it was potluck-style, we, the family of the deceased, brought the food out ourselves. We found solace in sitting around the table together, nourishing our physical bodies in order to feed our spiritual ones.

Food runs deep. This isn't a new notion; the inherent importance of food is obvious when you consider how we refer to it: "comfort food," and "soul food." But these are more than just names: Soul food has a fascinating culinary history. Its origins are rooted in slavery, and a sign of ingenuity, and making a lot out of a little, as slaves created dishes from available scraps, and utilized not only African crops that had been brought to the South, but also the indigenous American crops. All these disparate ingredients communed to make something unique and delicious. The common conception of comfort food rose out of wartime food rationing. Sugar, milk, hot meals, and meats like chicken and turkey became blissful luxuries and reminders of life outside of wartime, and thus took on a new level of importance because of their ability to comfort those who consumed them.

Historically, humans have utilized food as a unifier, a way to bring solace to each other and bridge the gaps between us. But in an era of social and political upheaval, more and more people are turning to food not only as a form of comfort but as a form of resistance. And in turbulent political and socioeconomic times, there has been a rise of focus on cooking together, eating foods that make us feel whole and nourished, and communing as a form of revolution.

Writer Andrea Grimes created the food blog Resistance Kitchen after the 2016 presidential election. She uses it to compile recipes like The Last Summer On Earth Salad (because “fresh, seasonal cooking seems so much more urgent when you contemplate the possibility that two of the world’s greatest jackasses are playing a game of nuclear chicken”), and refers to comfort food as “coping food.” The idea behind the blog was not only to show how cooking can serve as a coping mechanism—stirring, mixing, baking, boiling, and broiling in order to take your mind off things—but also that what we choose to put in our bodies can be a revolutionary act. With a roster of friends and colleagues that regularly make guest posts, the blog features dishes like The Clam Chowder of Sheer Survival, a rich, heavy soup meant to fortify inner strength by drawing on a reserve of childhood nostalgia, and Croissants of Long, Slow, Layered, Complex Rise to Victory, which utilizes complex pastry-making techniques as a metaphor for activism. Grimes’ blog considers every level of cooking, and every type of food, as a possible tool in the fight to keep our minds, bodies, and hearts fortified and strong.

Some take a different approach. Food educator Lauren Nixon, a Washington, D.C., teacher who offers workshops, classes, and cooking demonstrations, also advocates for home cooking and eating together as a tool of resistance. She is a proponent of clean eating, consuming whole foods that have been as minimally processed as possible. She is also an advocate of being aware of where your food originates and puts an emphasis on buying seasonally and locally as a form of resistance.

“Food, resistance, and comfort go hand in hand in my opinion,” Nixon says. “With so much of our world being pretty messy and violent and trauma-inducing, the home space, if we do the work, can be a nourishing space. I think that cooking from scratch in our homes, and making things with our hands, in general, is like creating a little world for ourselves that we can control. You can’t control what your next-door neighbor or your crossing guard or your aunt are doing. But you can have a really rad dinner party with people you trust and enjoy, create food that makes your insides hum and the perfect little vibe for yourself. Rituals are a grounding mechanism.”

Nixon also explains that she feels strong and powerful when eating clean foods grown locally by small farmers, not big corporations: “I want to put my hard-earned money into their pockets. I feel really good and strong because when my friends spend their energy and strength growing and processing food that I purchase, I know that it’s coming from a great place. Also, I think that there’s something inherently amazing about eating foods that are local, minimally processed, and nourishing. Your skin radiates, and you have energy. My body is thankful—I have the energy to bike and hike and walk all day long, and much of it has to do with my cooking and eating practice… It’s all about creating and making and getting your hands dirty.”

Eating and cooking are two of the oldest and most powerful tools for revolution; they help us monitor our minds and bodies and create spaces of nourishment, community, and resistance in the face of hate. Tonight, we feast.