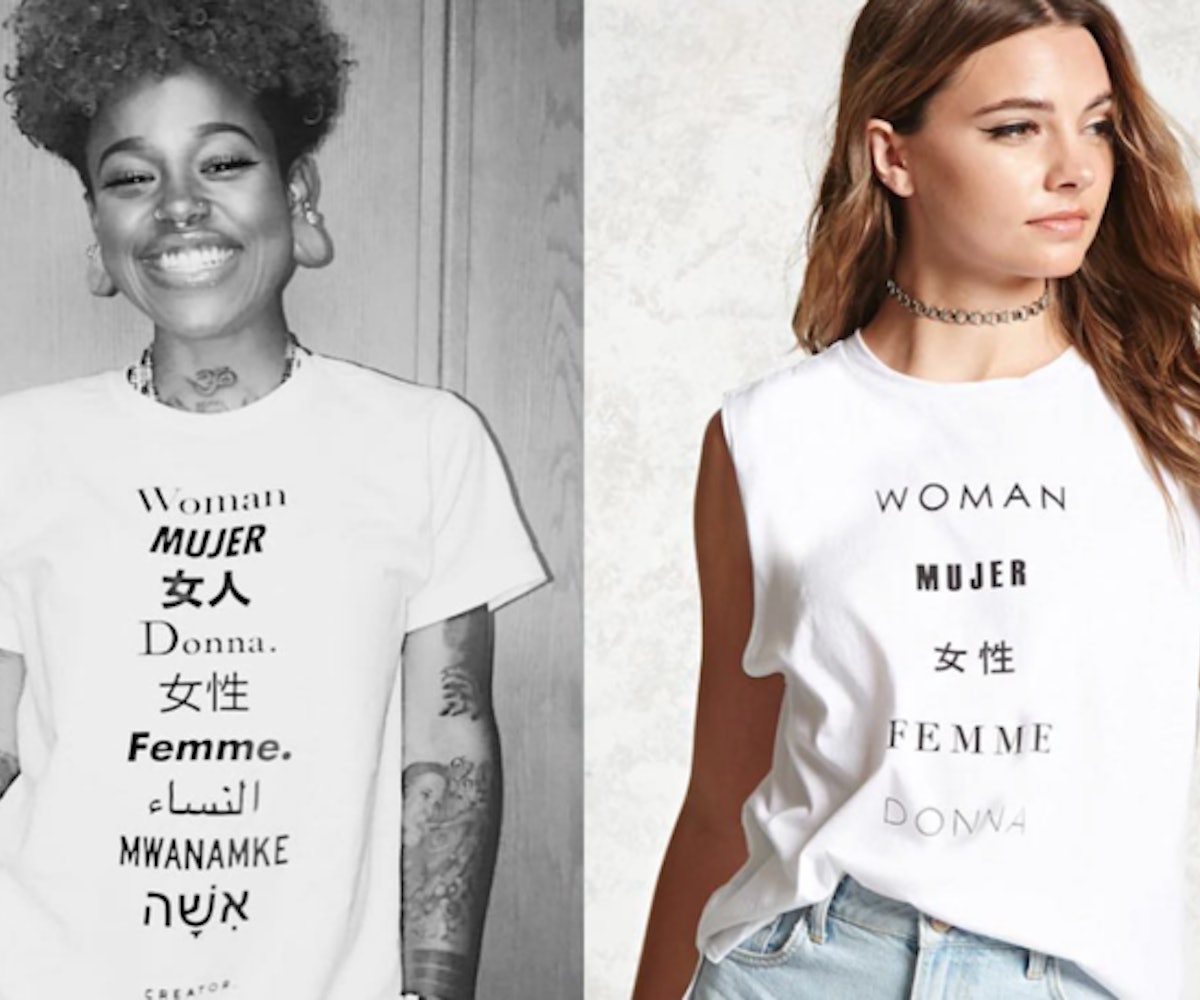 Forever 21 has faced an ongoing series of complaints from independent and big-name designers (including Rihanna!) alike, who have all caught the fast-fashion company mopping designs for their own purposes at often lower price-points. The latest company to spot a stolen style is Los Angeles-based public relations agency WORD, who noted the striking similarities between a T-shirt being sold by the retail chain and a design they created to benefit Planned Parenthood.

“We were just so utterly confused,” said Angela Carrasco, who co-founded WORD with Zoila Darton. They discovered the shirt (which has been on sale since July) after a customer tipped them off to the similarities. “We were trying to retrace our steps like who could we have shown this to?”

“Maybe they want to capitalize off of feminism,” Darton said. “But feminism is not new to me, it’s something that I really believe, so to see it being co-opted this way is shocking.”

The company posted a side-by-side of their design with the lifted look on Instagram:

“We created this shirt as a way to unite women,” Darton added. “Whoever went and lifted this didn’t do any research, or maybe they did and they just don’t care.”

“It’s crazy, and this might sound corny, but this shirt was birthed out of pain,” Carrasco concurred. “We wake up every morning [thinking] what right has been taken from [us] today? So this was our answer.”

The two are considering taking legal action against Forever 21. The company has since responded to the situation with the following statement: "The shirt in question was bought from a third party source. As soon as Forever 21 was alerted to the issue, we respectfully removed it from our website. Because this product did not have trademark or IP protections, there were no red flags raised at the time of purchase."

It's unclear how many orders of the stolen design Forever 21 sold before removing the product from stores.

“Forever 21, if you’re reading this, please donate the money you’ve made off of this shirt to Planned Parenthood,” Darton pleaded. “Because that’s what this was all about.”

NEXT UP
Fashion
Rosalía Wears Nothing But Hair In New Acne Studios Campaign
Fashion
The 13 Buzziest Moments from Paris Fashion Week
Life
On Repeat: Vaquera’s Away Collaboration Is Brought To You By Britney Spears B-Sides
Fashion
The Latest Lingerie-Inspired Runway Trend Is Wearing Bras As Shirts