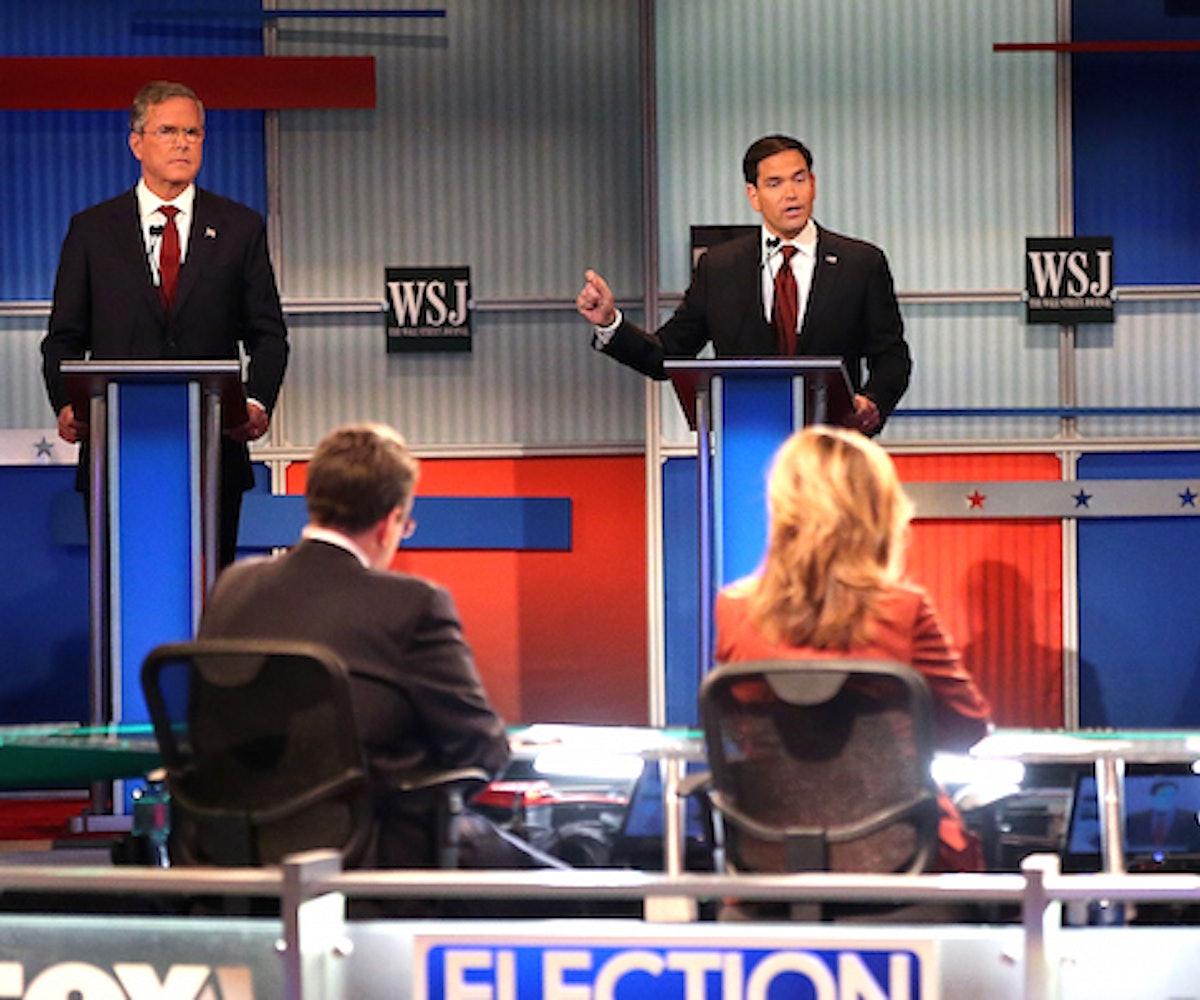 No, it was frightening because when the people vying to lead America threw out boldfaced lies or argued that some of our hardest-working laborers could and should accept earning $15,000 a year, the audience exploded with applause. We live in ugly times.

Luckily, there were bright spots as when these nominally powerful people whined like schoolchildren, claimed China was active in Syria, referred to themselves in the third person, or simply made no sense at all. Actually, those aren’t bright spots at all. Oh, well. At least we can GIF the hell out of them and have a good laugh, right? RIGHT?

Fox Business News Co-Host Gerad Baker: "Tonight's rules are simple. Up to 90 seconds for each answer. One minute for each follow-up response. And if a candidate goes over their allotted time, you'll hear this."

Fox Business News Co-Host Neil Cavuto: "It sounds like a game show but it's not."

Florida Senator Marco Rubio: "Here's the best way to raise wages. Make America the best place in the world to start a business or expand an existing business, tax reform and regulatory reform, bring our debt under control, fully utilize our energy resources so we can reinvigorate manufacturing, repeal and replace Obamacare, and make higher education faster and easier to access, especially vocational training. For the life of me, I don't know why we have stigmatized vocational education. Welders make more money than philosophers. We need more welders and less philosophers."

Bush: "I got about four minutes in the last debate. I'm going to get my question right now."

Dr. Ben Carson: "Well, first of all, thank you not asking me what I said in the 10th grade. I appreciate that."

Bush: "Thank you, Donald, for allowing me to speak at the debate. That's really nice of you. Really appreciate that. What a generous man you are."

Texas Senator Ted Cruz: "I will say the politics of it will be very, very different if a bunch of lawyers or bankers were crossing the Rio Grande. Or if a bunch of people with journalism degrees were coming over and driving down the wages in the press. Then, we would see stories about the economic calamity that is befalling our nation."

Bartriomo: "Do you support the president's decision to now put 50 Special Ops forces in Syria and leave 10,000 U.S. troops in Afghanistan?"

Carson: "Well, putting the Special Ops people in there is better than not having them there, because they—that's why they're called 'Special Ops.'"

Carson: "We also must recognize that [Syria is] a very complex place. You know, the Chinese are there…"

Trump: "Why does she keep interrupting everybody? Terrible."

Paul: "Yes, I would like to finish my response, basically."