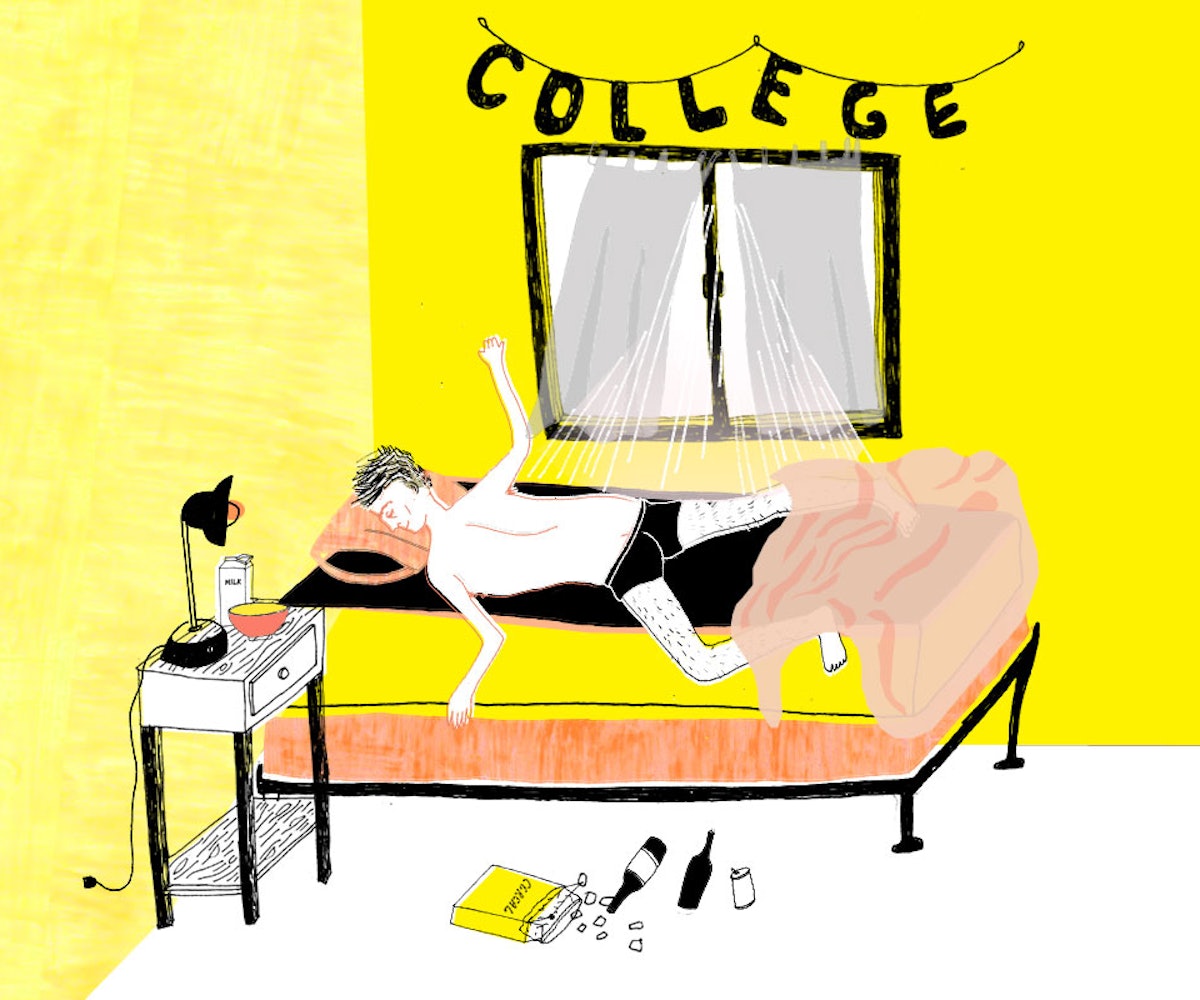 As anyone who's ever lived with a roommate knows, living with another person isn't always easy. Add to that the pressures and changes of your college freshman year, and you have a petri dish of differences which may or may not lead to disaster. While we watch a sizable portion of our nation's youth embark on their first collegiate experience, we reminisce about our freshman year, and the circumstances we found ourselves in. Click through the gallery to see our most dizzying incidents illustrated in full color.

Add yours in the commments, and let's all reminisce our former miseries together.

My roommate and I saw things differently when it came to domesticity and respecting personal space and items. He had no problem using my things and going into my room without permission. I had somewhat come to terms with this, and even convinced myself I was too uptight. One weekend, though, I returned home from a few days with my boyfriend to find my roommate had not only eaten all of my food and left a mess of crumbs and liquid in the kitchen, but also had left vomit in and around the toilet. My boyfriend walked up to me as I was surveying the kitchen scene and whispered, "There's someone in your bed..."

Now, I had just started seriously dating my boyfriend at the time and wasn't spending much time in my apartment. I had a feeling someone had been sleeping in my bed because, again, I'm anal and notice when things are even slightly off. But I thought—hoped—my roommate would have the decency to ask me before giving someone the go ahead to crash there. I walked in to find some stranger sleeping in my bed, naked, save for a pair of underwear. I gave them a look. They got out. I washed my sheets and knew right then and there that it was time to move.

I was put in a triple my first year. So, imagine for a moment, the typical miniscule dorm room with an extra person jammed in. My two roommates were best friends from home, and at one point during the first semester, I got close to one of the girls. The other got jealous and assumed that we were iChatting about her. So, with that strong sense of paranoia, she actually hacked onto my computer and read through all of my iChats. Needless to say, she found some things she probably shouldn't have. She never admitted to it or directly confronted me about it—she just let the animosity and tension build...and build...and build.

My freshman year roommate and I started off as great friends. But then, I realized she didn't really have very many friends outside of me. My best friend in the entire world also went to school with me, and he was a very wealthy guy, although you wouldn't overtly know it. He was such a down-to-earth gent who took care of his friends, but my roommate wasn't super-interested in him—until she heard how much he was worth. Then she went hard in the paint. She latched on like white on rice, and they began to date. At his birthday, we went out to a really fancy place, and one of our friends remarked, "Man, I got to get me a life like this!" My roommate turned over and hissed, "Hands off, I already found mine!"

I'm not sure why my mom let me move to New York at 18 to go to fashion school—I grew up in the Midwest and was relatively sheltered and naive. After meeting my roommate, I quickly learned a couple of things about the kid: He grew up in NYC and he had been a go-go dancer at a well-known gay club since he turned 16. He wanted to bring me out that night. Fast-forward to later that night: We were being fed drinks by his boss, and I was sitting on the lap of some much-older man that he introduced me to. I was relishing in my new New York City lifestyle. Then, my roommate told me that he would be going home with his boss and yelled back to me (who, let's remember, was really new to New York), "You can find your way home, right?!"

During the time we lived together, notable events included him being flown all over the world by his sugar daddy, locking me out of the room to hook up with other boys on our floor, and me walking in on him doing nude photoshoots with random photographers in the middle of our room. The following year, he left his study abroad trip over the weekend to fly back to the states to marry a man—who was in need of a green card—for $10K. While many wild and eccentric things have been excluded from the story, I wouldn't say he was a horrible roomie, but rather, he was someone that showed me how far shamelessness can get you what you want in a city that chews up and spits out so many people.

The day I moved into my freshman year dorm, my roommate—who I had found via our incoming class' Facebook page a few months before—and I made plans to go to a frat party together. A few hours later, I was all dressed up and ready, abandoned. (Her friend had decided that she didn't like my "vibe" and didn't want me to tag along to her new senior hookup buddy's party.)