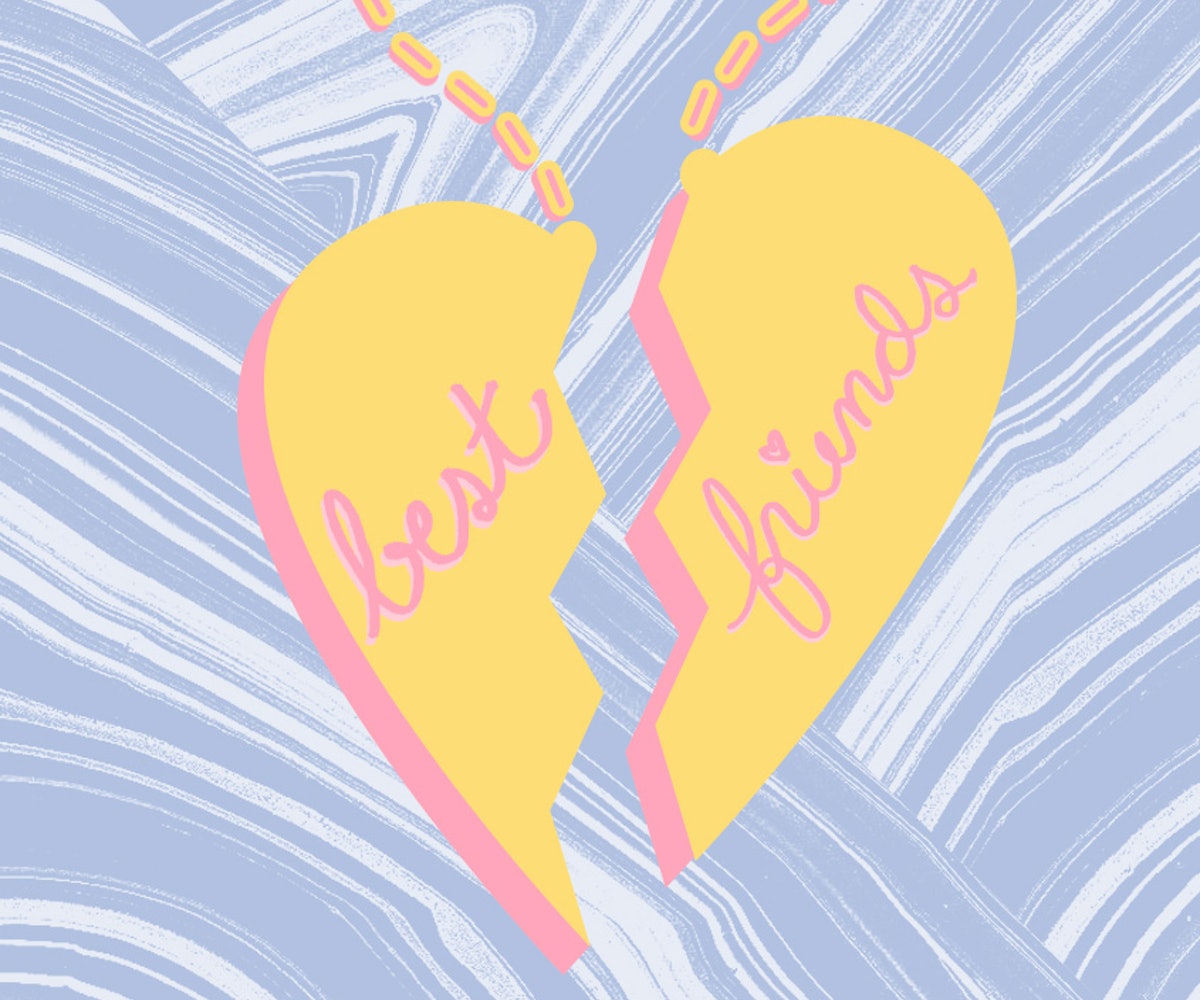 Out of all the things you learn in school, basic human relations is not one of them. Sure, you can recite the Pythagorean Theorem, but can you break up with a friend? Unless you've had to deal with it first hand, those life lessons fall by the wayside until, well, you’re face to face with a friend breakup. We’re taught to plan, but no one ever plans to end a friendship—at least not from the start.

“When I was younger, I thought friendships were supposed to last a lifetime,” Jodyne L. Speyer, author of Dump 'Em: How to Break Up with Anyone from Your Best Friend to Your Hairdresser, tells us over email. “I had a childhood friend I stayed friends with long into my adult life, even though she was awful to me!” For years, Speyer, like many, made excuses for remaining friends with an individual who was toxic to her life and, in her words, she simply didn't like. So, she did what anyone would do: She dumped them.

Making the decision to break up isn’t easy, though. Like a romantic relationship, you often flirt with the idea while consciously repressing the negative feelings you might have toward your former friend. For me, it took years of eye-rolling and imagined conversations with myself before deciding enough was enough and ended it with a friend. “Friendships entail give and take, and the equation balances out over time,” Irene S. Levine, psychologist, friendship expert, and producer of The Friendship Blog, tells us. Sometimes, though, the equation gets unbalanced and the friendship turns toxic. It’s then that you must decide where you’re going to go and what you’re going to do. “Unlike our family,” Speyer says, “we chose our friends and we do so because we share a common interest.” Life happens and interests change, and people grow apart. That’s not necessarily a sign of a toxic friendship; that’s just life. “If a friendship stops making us feel good,” Speyer adds, “that’s a pretty good indicator that it’s time to go our separate ways.”

The first step in doing so is identifying whether your friendship is toxic. Both Speyer and Levine stress knowing how you feel when your friend’s name pops up in your Newsfeeds, phone screens, etc. Levine says you’re in a toxic relationship when you “feel emotionally drained” when you get together—if you’re motivated to even do that. Speyer echoes that and says you’re in a toxic relationship when the other “expects way too much of us” and hardly takes the time to listen to your life. More importantly, though, Levine stresses whether you can trust your friend anymore. If not, it’s time to move on.

If you’ve reached a point where you’re ready to break up with your friend, heed Speyer and Levine’s advice and sleep on it. Speyer suggests giving your friend the heads up that something’s wrong: “This simple step is important because it allows the friend to potentially fix the problem—if it’s fixable.” Levine gave the option of maybe cutting down the amount of time you spend with someone. Afterward, list one or two main reasons why you and your friend don’t gel. Both Speyer and Levine urge folks to rehearse what they’re going to say. Levine called it a “script.” According to Speyer, “Your goal when breaking up with someone is to get out of the conversation as quickly as possible.” To follow that, Levine suggests taking “responsibility for the decision to end the friendship by framing your remarks in terms of ‘I’ rather than ‘You.’” Then, allow for the other person time to respond.

As for the medium? Speyer and Levine had different opinions on the digital route: The former said never, because “this is someone you once called a friend” and you want to be the respectful, bigger person. The latter said it depended on the type of friendship you had and your reasons for ending it. Though, Levine did said it was best to do it in person because leaving a paper trail—whether digital or not—“can be misconstrued and shared with other people.” This is, to harp back to some middle-school quip, an A and B conversation and everyone else can “C” their way out of it.

One thing you shouldn’t do? Ghost. Sure, it’s easy, but it’s not beneficial to any party involved. Speyer says it’s “one of the most disrespectful things you can do to someone. We all deserve closure.” Both of you might slowly stop talking each other, but that’s not really ghosting. “It takes a big person to be able to articulate why you are exiting a friendship,” Speyer continues. “If someone is making an effort to see what happened to you and if they did something wrong, tell them.”

There will be a sense of loss afterward. It happens with romantic relationships, too. Depending on how you treat your digital friendship—either purging them completely or, as Speyer suggests, hiding them from your timelines—you may still be inundated with their day-to-day life. You know your limits and how you go about that aspect of the process is up to you. Levine suggests not wallowing in it, but taking your time to “get over the experience and learn from it.” Taking the time to figure out how to be a better friend is key. “Friendships require nurturance,” she tells us. “Not all friendships last forever—even very good ones.” At the end of the day, it’s your well-being that needs the most tending to. Burn bridges as you see fit, but do it with kindness, honesty, and a strong sense of heart. You want to be able to say you’ve given it all you can, and with a sense of absolution, move on.