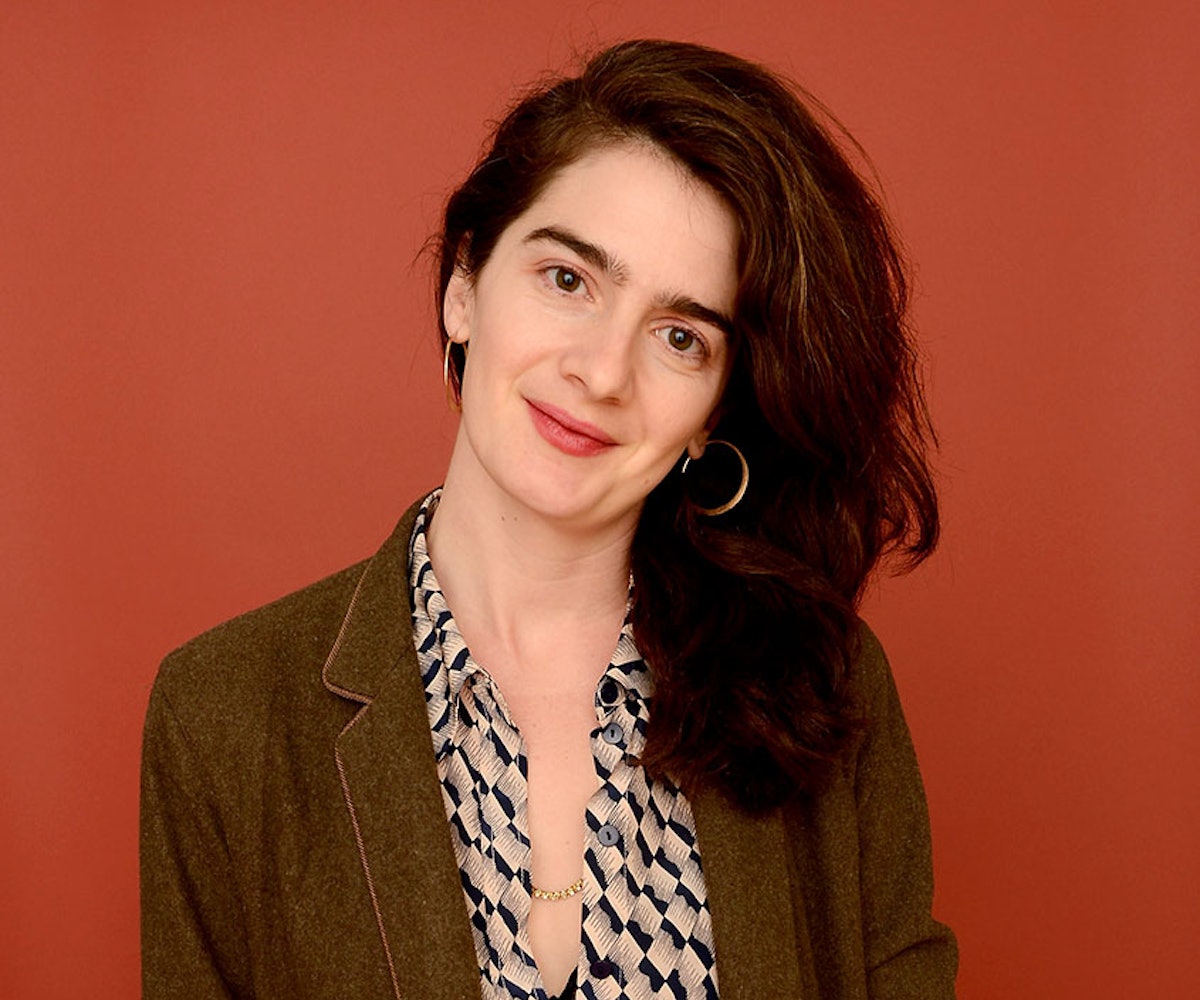 Gaby Hoffmann’s white-hot career might seem sudden, but you’re forgetting you’ve loved her for years. Remember the little girl in Field of Dreams, or Maizy who won’t brush her teeth in Uncle Buck, or maybe the brooding teen in Now and Then? That was Hoffmann. These days, after decades in front of the camera, the 33-year-old is quickly becoming everyone’s favorite “new” actress. Along with many of the rising female voices she works with, Gaby Hoffmann has no problem being beautifully messy—and embracing it.

Nylon had the pleasure of chatting with the actress about her multitude of projects—all of which we love. There’s Lyle, her first horror film where she plays a mother who begins to unravel after loosing her child. It’s from female filmmaker Stewart Thorndike and has been dubbed the “lesbian Rosemary’s Baby.” Then there’s her work on Girls, where she plays Adam’s nutty sister Caroline. Coincidentally, Hoffman herself became pregnant shortly after her character did, but we’ll get to that. We also had to talk about her Outstanding Supporting Actress in a Comedy Series Emmy nod this year for playing Ali Pfefferman in Jill Soloway’s Transparent (even though she describes the whole thing as “a little uncomfortable”).

Lyle is your first horror film. What made you get on board?

I’d known Stewart through my boyfriend and we hadn’t spent that much time together, but I think we had a mutual affection for one another. She asked me to lunch and just sort of pitched this idea to me. I’m always excited to work with people I know. Honestly, I’m not that interested in horror movies. I’m not really turned on by that stuff but [she] seemed to be and it sounded like an interesting challenge. I think I’d seen Rosemary’s Baby once when I was 10. I don’t really see any horror films, but certainly as an actress, doing something that is almost the last thing you’d see yourself doing is always titillating.

A director has to be conscious of genre, but from an acting point of view, I don’t think that’s always necessary. With this film, did you think of yourself in a horror film or work on the character differently than you would on something like Transparent?

You’re absolutely right. From the actor’s perspective, hopefully you’re not thinking about genre. You sort of know you’re in for a slightly different set of behavioral challenges.

Were you exhausted? You guys shot the entire film in 5 days. How did you maintain that amount of energy for the shoot?

I don’t really remember at this point what happened, but I probably got sick. I can kind of get through anything until I need to. I can sustain something and then I fall apart. I can only compare it, this is sort of a pathetic comparison because one is so extreme compared to the other—I can only compare it to childbirth!

I was just about to say that.

Yeah, it’s like I didn’t sleep or eat for three days and was in excruciating pain and then pushed out a 10-pound baby. Your body can do extraordinary things when you’re mentally prepared for it. I strongly believe in the mind-body connection. Adrenaline is a huge factor. It’s kind of helpful that it was 5 days! You’re just working and sleeping, working and sleeping, and it’s kind of great because you’re just submerged and consumed by the thing.

I love the roles you choose because they’re all high-energy in that way, even Caroline on Girls. What’s your process for these extreme roles?

I don’t really have a process. I’m not a trained actor. I don’t really know how to approach it any other way than completely intuitively. I just try to show up and be there and trust my instincts. For me, that’s pretty much what I do no matter the role or the project. I think it would be really interesting to do something that came up that required some research. I’m sort of a messy, disorganized person, but I’m very present when I’m in it. I’m bad at emailing and returning phone calls and I don’t quite ever know exactly where the thing is I put down, but once I’m doing something, I’m fully doing it. That’s just the only way I know how to approach acting.

You saying that you work purely on intuition makes me think perhaps it isn’t quite as crazy that Caroline was pregnant and then you got pregnant, played a pregnant woman in Lyle and then had your baby.  Did you manifest it through your work, maybe?

I don’t think of it in terms of I manifested it in my work. It is odd. I find that that’s sort of just true a lot with work. When you’re tapping into not just physical human milestones but emotional dynamics and psychic stuff as an actress all the time, it has to overlap in your life if you’re being honest. It’s all just a weird messy pot! Perhaps some of it’s manifested, sure; perhaps some of it is coincidence. Who knows what’s the difference!

That lifestyle is hard, though. It is messy. Now you have a child. What do you do for yourself so that you can wipe the slate clean and be open for your characters?

That’s a good question. I’ve been in LA for six weeks working and I’ve yet to find my way to a yoga class. What’s really relaxing to me right now is being with my baby and my boyfriend—just having a couple hours in the evening or in the morning to be sitting in and be doing absolutely nothing with those two. That’s sort of as good as it gets. I’m fairly good at being in the mix of this, as you’re saying, slightly crazy, disorganized, messiness. I’m mostly really good at it until I’m not and then I fall apart! I just sort of show up on [the Transparent] set, hand my baby off—having a conversation. We’re all incredibly, madly in love with each other and a big, happy family. You show up and you see a 100 people you love and you’re trying to eat something and you’re pumping and then you’re like wait a minute we have a scene!

I do think that Jill [Soloway] and Lena [Dunham] are part of the movement to have everyone accept that type of life. We’re not in the time where women that are idolized are all like, say, Lauren Bacall – classic movie stars. Do you feel like working with them has inspired you to embrace the chaos you’re talking about and find that beautiful?

I just always have. I was brought up that way. What I find beautiful is a woman being true to who she is and what she needs and wants. For me, that’s what it looks like. For somebody else, it might look like Lauren Bacall and that’s beautiful. You’re most beautiful when you’re in your comfort zone. That looks uniquely different from one woman to the next. Certainly Jill and Lena and this incredible wave of new female-driven written and directed and conceived-of work is expanding what the ideal woman should look like [and it] is absolutely necessary. We definitely need to be doing everything we can to be creating more and more space for each woman to find her own expression. It shouldn’t look like Lena’s. It shouldn’t look like Jill’s. It shouldn’t look like mine. The more we can do to make every color of the rainbow acceptable, then I’m all for it.

I do have to say congrats on your Emmy nomination. Where were you when you got the call? Did you celebrate?

I didn’t celebrate! I find the whole thing weird. I was in bed. I had no idea. We were just waking up in the morning. We spend a lot of time in the morning in bed now that’s there’s a baby. My phone was making so much noise that I eventually got up and looked at it. There was a weird text saying, “Congratulations,” and I had no idea what it was about, honestly! I knew vaguely that the Emmy thing was happening that week but I wasn’t tuned into it. I wasn’t interested in getting nominated. I was definitely excited for the show and I sure hoped that the show would get acknowledged because I know it’s a big deal. For me, personally, I was completely not planning on it. Honestly the whole thing is a little uncomfortable!

Award shows are sometimes just glamorous to everyone that’s not there. When you’re there it can all just be a big hoopla.

It’s really lovely and I feel totally grateful and flattered. But there’s like so many incredible actors! The competitive nature is so bizarre to me and seems so contradicting to what we’re doing. I try not to take it all to seriously. The whole thing is based on the notion that everybody wants more money and power and fame and I really don’t want those things to that extent. But I’m just going to try to have some fun and see some friends.

How has being a mother affected your choice in projects or your goals as an actress?

Being a mother hasn’t changed anything really on that level for me because I feel like I was already making the types of choices that I would want to make for my daughter. For me, being a mother is about being yourself—trying to be honest about who you are in the ever-evolving nature of who one is and do that for your kids, too. I was ready to become a mom not just because I have an incredible partner and because I had the psychic space and heart space for it, but I was living a life that I was ready to invite someone into that I felt could not just nurture and sustain our relationship but also that I’m proud of. There isn’t a piece or part of my life that I wouldn’t expose my daughter to. I can bring her to work and feel good about it.