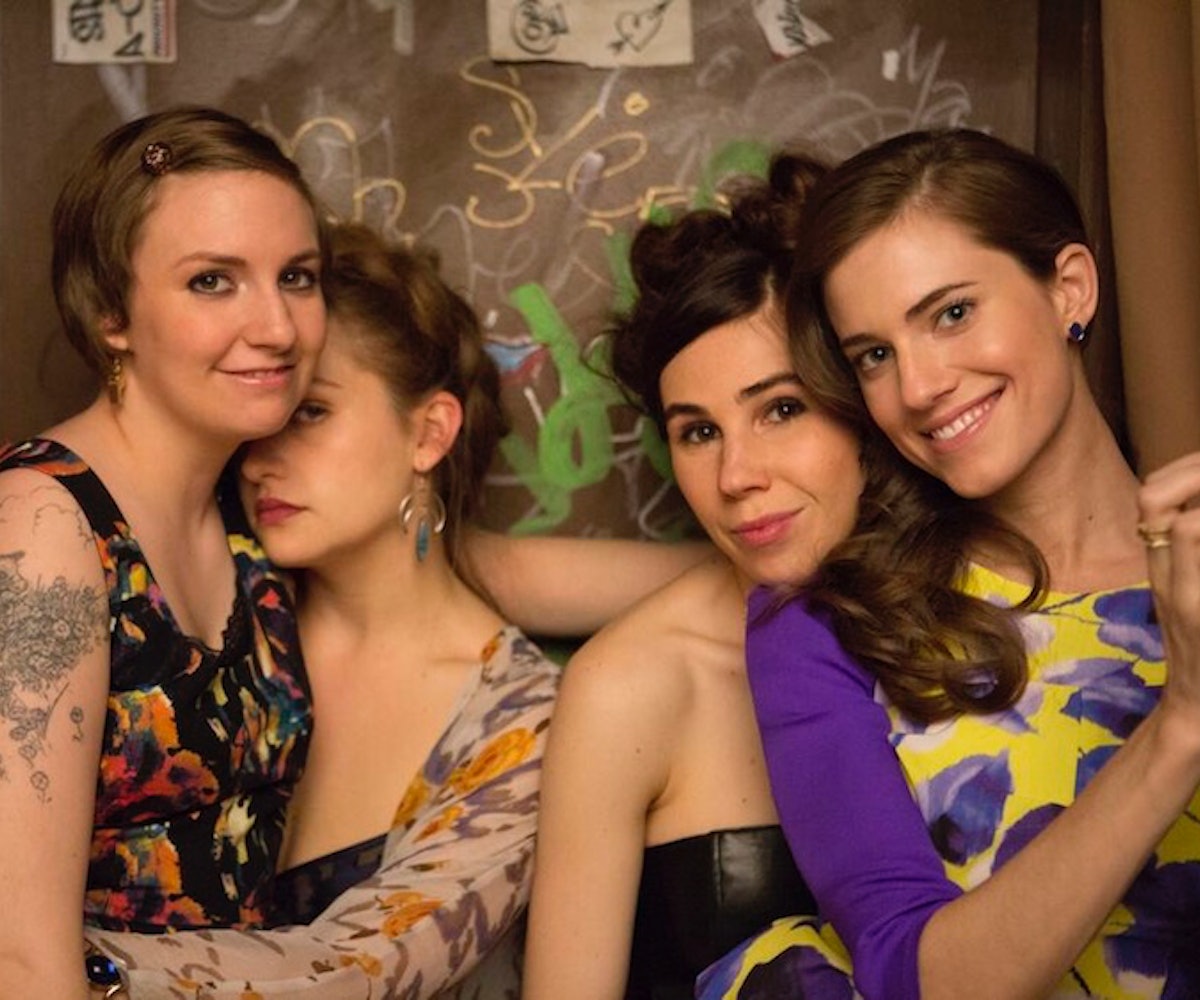 Mark your calendars, set your phone alarms, and make a date with the couch! Not only is it Wednesday night and we're feeling alive, but the Girls season three finally has a premiere date.The news was announced by none other than Lena Dunham earlier today, who blasted it out via--where else?--Instagram.

The good news: season three begins on January 12 with two back-to-back episodes. The bad news: we still have three months to wait.

To tide us over until then, we've made our predictions on what's going down in January based solely on the first official promo image here. Yes, they're ridiculous and totally unfounded. But then again, they're also crazy enough that they just might happen....

Hannah's in a good place. Her OCD, ear-poking thing is over. I'd like to think that it's because she's gained control of her life, gave Adam the boot, and really focused on her book--but that's expecting a bit too much.--REBECCA WILLA DAVIS

Hannah's new slick hair signifies a major change in her life. She's spent the last two seasons bumbling through jobs and weird eyebrows and boy problems, but this newfound confidence is paying off. Although she's totally clued-in to the '90s hair clip trend that was all over the runways, she had no idea she was ahead of the same. Just saying. --LIZA DARWIN

Hannah Horvath finds her favorite Delia's catalogue in the bottom of her closet and is feels pretty good about the trends depicted inside. She's glad Miu Miu's spring show is making lip gloss cool again, but sad her hair isn't long enough to try the hair-in-lipgloss trend. She gets really into finding old copies of Sassy magazine on eBay, listening to The Julie Ruin, and gets a "Boys suck" tramp stamp in the season finale.  --STEFF YOTKA (Editor's Note: Steff has never seen a single episode of Girls.)

Some people cut loose after a break-up (see: Shosh), but Marnie? She gets even more straight-laced. Remember when she wore a plastic dress? Yeah, me neither. RWD

Marnie's always been one to look pretty and put together, but I think the fact that Charlie is gone--again--has really affected her in a bad way. She's taken her Stepford Wife-ness a little bit too far with the fake smile and perfect curls. Never thought I'd say it, but suddenly I miss her "rebellious" Booth Jonathan phase...LD

Marnie marries a politician, moves to Westchester, and starts a Sandra Lee-meets-Goop style website that offers lifestyle tips for other stay-at-home socialites. She hosts a weekly book club where tartines and croissants are served, that Hannah attends one time and flips out like Kristen Wiig's character does during the bridal shower scene of

Judging from her leather top and dark eye makeup, it might

that Shosh is breaking out. But $10 says it's only five minutes into the first episode when she ditches the all-black and changes into her pink Juicy jumpsuit. LD

and really relates to Lily Collins' character, a lot. She buys an entire leather wardrobe, several brow pencils, and perfects her smirky smile. She also starts subscribing to

Remember how season two started with Jessa just in the best. place. ever.? Yeah, not any more. She and Hannah have practically switched roles, and even when she ran away Jessa clearly couldn't escape her problems. RWD

Poor Jessa, she looks so sad! Between her failed marriage and awkward relationship with her family, it's no wonder she's frowning. This season we'll see things get worse for her before they get better. LD

Nothing says moody artist like a face half-basked in shadow, magical crystal bracelets, and hand tattoos. Jessa goes through an Emily Dickenson phase where she hangs out in her basement for six months making paint poems and Instagramming artsy pictures of her cats. She also gets really, really in to red wine. SY