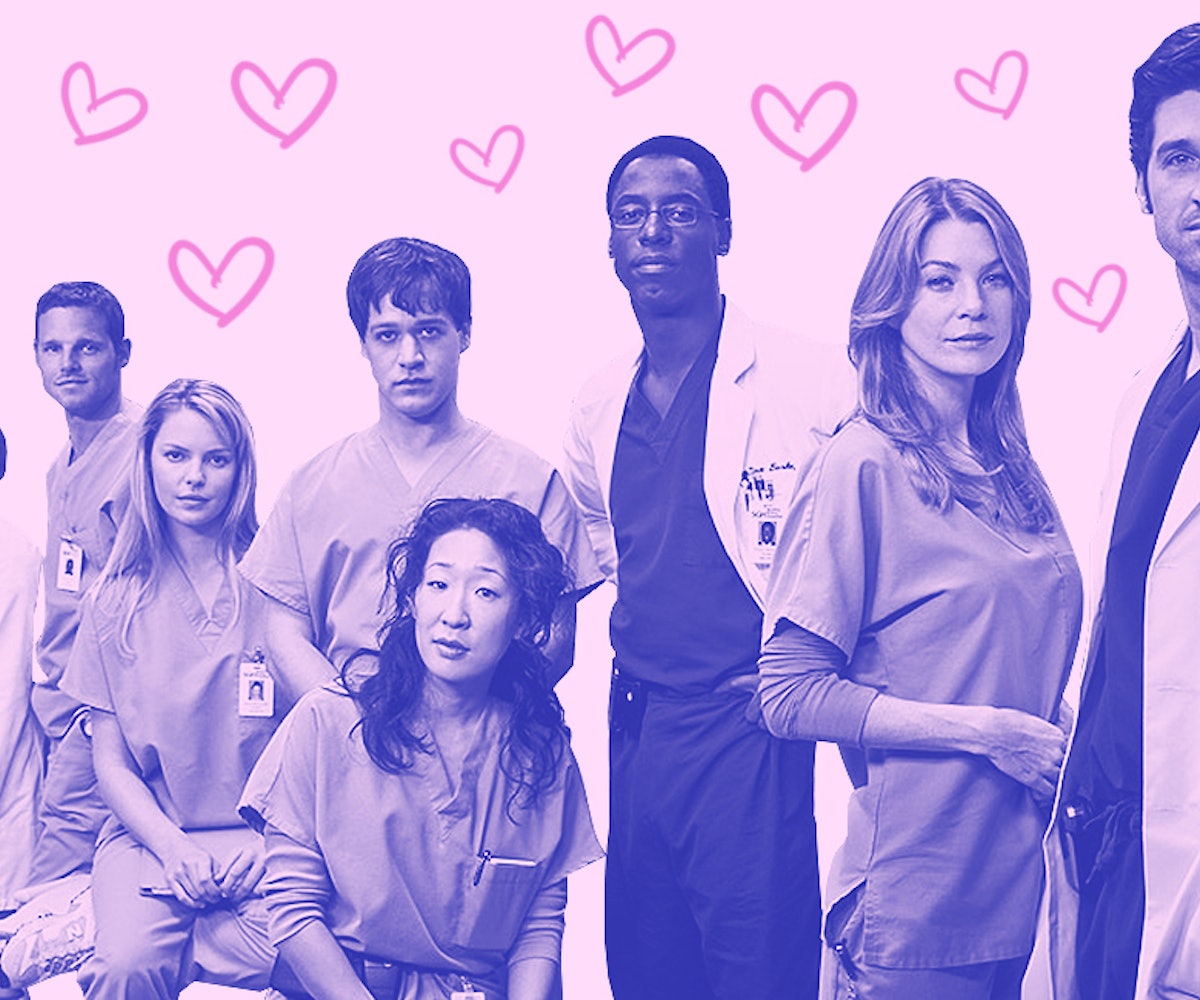 A couple of months ago, the topic of Grey’s Anatomy came up in the NYLON office. Maybe we were talking about it because the show's 300th episode was about to air. Or, maybe we were talking about it after that interview Ellen Pompeo did with The Hollywood Reporter went viral? Either way, the conversation eventually led to the one question I knew was coming: “Does anyone actually still watch that?!” And that's when me, an intellectual, replied: “I do.”

I’m used to dismissive reactions about Grey's—from friends and TV purists alike—by now. They question how good a show could possibly still be after it's been on the air for so long. This is compounded by the fact that Grey's didn't even have an auspicious beginning: It started out as a mid-season replacement for something called Boston Legal. Plus, the show has had its fair share of ups and downs, from ridiculous story lines (we will not speak of ghost sex) to subpar spin-offs to a constantly changing cast of characters (honestly, the only less stable career than that of a Grey's actor is that of someone in the Trump administration). And yet, as a friend once put it: Grey’s is like the stock market, there are highs and lows, but it’s always worth the investment.

And invest you must with a show like this. Since Grey’s Anatomy's premiered in 2005, Shonda Rhimes has produced 14 seasons (while also launching several other shows you may have heard of). And it's done so while performing the impressive task of retaining viewers—about eight million, according to the last Nielsen rating—while also adding new fans, thanks in part to its arrival on Netflix in 2009. Executive producer Krista Vernoff has said that 20,000 teens discover the show each month and, once they coast through it on the streaming service, seek it out on ABC. The bingeing part is a feat, seeing as it’s not, exactly, an easy show to binge. It takes commitment. It takes spirit. It takes a person willing to endure the emotional warfare Rhimes puts you through from episode to episode. But the fact that a new generation (who were toddlers when it first aired) finds it worthy is also a testament to how good the writing and characters are.

Scandal and How to Get Away with Murder get a lot of credit for being Rhimes' most forward-thinking shows, as their lead characters are black women with complex, fascinating lives—unfortunately a rarity until recently on network TV. But Grey’s broke ground in that area long before those shows existed. Rhimes has said in the past that she’d like to replace “diversity” with “normalizing,” which is why race is more description than definition on the show. Each character—of color or otherwise—is fleshed out, and none are tokenized. She filled the halls of the hospital with doctors and interns and patients that reflect the world we live in. And she did it without making it seem like an exception, but rather the institution of a new rule.

Or, should I say many new rules, as many rules as there are characters, which is a lot. In fact, I imagine the Grey’s writers' room looks a little like the meme of that woman, trying to figure some complicated stuff out. It probably has one of those Homeland-esque corkboards, laced with rubber bands going from one character to another in an attempt to keep track of who slept with who; what character already had what rare medical condition; what Big Disaster they’ve already cycled through. It takes a lot to pull off the many, many different story arcs, and the show doesn’t always get it right, but even when you think you’ve reached your breaking point—when your favorite character leaves (Christina Yang), or dies (McDreamy, Lexie, Mark…), or you don’t think you can handle any more fatal fires—and you’re convinced there’s no way the show can revive itself, it finds a way to do just that, usually by introducing new equally lovable characters, themes, and relationships.

But the show also manages to stay topical, as it did in one of my favorite episodes this season, which centered around black chief of surgery Miranda Bailey (long overdue, btw!). After experiencing chest pains on the way to work, she admits herself to an ER at a hospital other than the one where she works. When Bailey (a seasoned doctor!) realizes she’s having a heart attack, she alerts the doctors on staff, only to be met with skepticism. They question her pain and brush away her claims. After bringing in reinforcements, she gets the help she needs, but the episode is a nod to the fact that there’s a proven racial bias in how medical professionals assess black patients' pain. It’s been talked about extensively, but came up recently regarding Serena Williams and the complications she suffered after giving birth, and Grey's handled the topic with aplomb.

Over the years, Rhimes has tackled important topics like salary bias, LGBTQIA issues, and undocumented immigrants, making social justice integral to the show’s fabric since Season 1. Grey’s has always been relevant, but it stays relevant because it evolves with the times. Something that other shows, which have been on for much longer, could benefit from doing.

But as much as the show has changed over the years, there’s still a familiarity to it. You know that character you just started to like is probably going to die. You know you’re either going to get some grand monologue profession of love and/or a hot sex scene in the on-call room. And you know that, at the end of every episode, Meredith’s voiceover is going to offer up some life advice you’ll consider taking, but forget about come the next commercial. It's this dependability, even with all the attendant turmoil, that keeps people coming back to Grey’s, as it offers a strong dose of nostalgia, one you can get while sitting on your couch at home. It's the perfect long-term relationship show, the kind you'll let take you wherever it wants to go next (hopefully sans another musical episode).

NEXT UP
A Night Out
A Night Out With Rachel Bilson
Entertainment
Annie DiRusso Makes Indie Rock For Your Growing Pains
Entertainment
Harry Styles Is Performing At The 2023 Grammys
Entertainment
Raye Explicitly Speaks Her Mind On Debut Album, ‘My 21st Century Blues’
Style + Culture, delivered straight to your inbox.