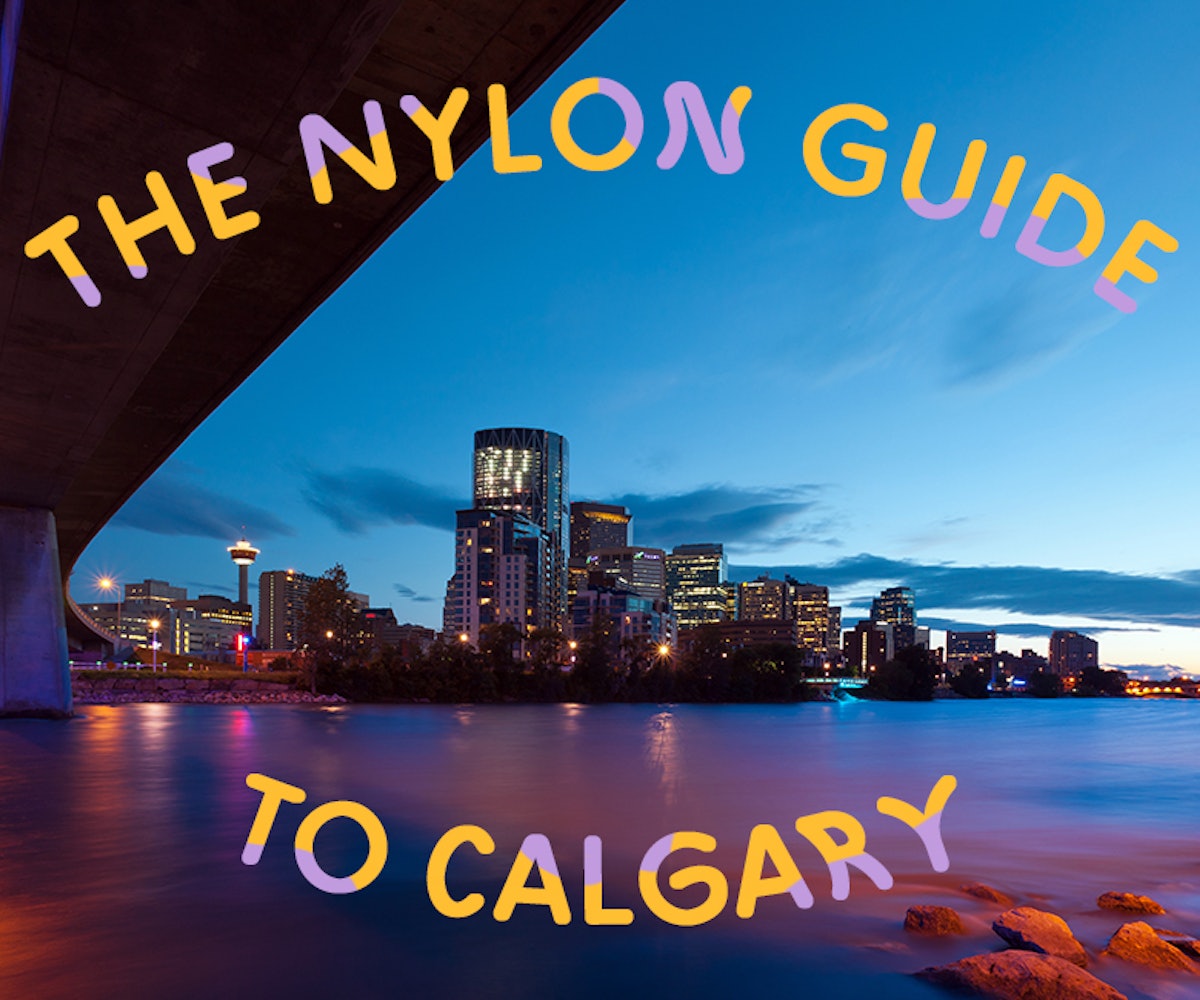 Blessed be The Calgary Stampede. When I first told people I was headed to the Canadian city, the cow-, hay-, and yee haw-friendly event was the first thing most people mentioned. And yes, I’m sure that the rodeo, held every year in mid-July, has its own charm. But Alberta’s largest city has plenty to offer for those who don’t know which one is the business end of the horse.

Located in the middle of Canada, Calgary was once thought of as a cultural island, with music, fashion, and culture working its way inward from the coasts—slowly. Recently, though, the pushback on this misconception has been swift. In the past 10 years, the city has found itself in the center of a beer, food, and culture revolution, with craft breweries, chefs, and events like Sled Island offering something for nearly everyone. Ready to check out some of Canada’s hidden gems? Here are a few ideas to get you started.

Fairmont Palliser Hotel: If you’re going to go on vacation, why not go all in? Originally a stop on the Canadian Pacific Railway, the Fairmont Palliser was 1914’s answer to ultimate luxury. These days it’s still pretty posh, yet manages to stay within relatively affordable price points. Head through the opulent lobby (still showcasing the kind of old world glamour that would make Wes Anderson take pause) and head up to your room where thoroughly modern amenities like large soft beds, coffee makers (bless), and rose-scented bath products by Le Labo await. Additional relaxation is possible—the bottom level hosts a full spa, complete with pool facilities and massages—though it might be hard to settle in for a full day of lounging. This is because, located in downtown Calgary, the Fairmount Palliser is within eyesight of a host of bars, coffee shops, restaurants, and music venues.

Commonwealth: Since the word “goth” has gotten sticky thanks to being co-opted by Hot Topic, let’s just call Commonwealth a pleasantly dark watering hole where you can get a cheap drink or cocktail while gazing at a cabinet of mildlymu morbid curiosities. But they also host local musical nights on their two stages. Head to the downstairs dungeon (lack of light, brick walls, generally haunted atmosphere; yup, I feel comfortable using the word “dungeon”) for an additional stage, bar, and a chance to gaze at a (fake) stuffed raven. It’s a Poe-like vibe that’s downright goth by anyone’s standard.

WHERE TO DRINK (COFFEE EDITION)

Rosso: Coffee lovers take note: Calgary is your city. Rosso Coffee has six locations across Calgary, but for the ultimate education, head to their Victoria Park location where the coffee is roasted on site. There you can pepper their well-educated baristas and employees about the company’s incredible quality control, with beans purchased directly from farms in Guatemala, Costa Rica, and Colombia. Or you could just kick back with a latte and decadent biscuit breakfast sandwich. Either way, be sure to grab a bag of beans on your way out for the perfect caffeinated souvenir.

Trolley 5: Named for the public transit route that used to run just outside the front door, Trolley 5 appeals to both the thirsty and hungry. You’re definitely going to want to eat from their locally sourced menu. (Bonus for meat-lovers: There’s a sandwich on the menu called “Vegetarian Nightmare.") And the joy of hanging out in the building, from the airy atrium on the second floor to the dark and cozy basement level is not to be undersold. But Trolley 5’s beer menu is the real star. Over the last year the Alberta providence has gone from 19 craft breweries to 52 with Trolley 5 leading the pack. Owners PJ L’Heureux and Ernie Tsu have a combined 50 years of experience, and Tsu has even experimented with brew techniques at 160 different breweries across the world. Book a brewery tour (which—score—includes a pint and a tasting flight) to get a sense of the guts of the operation. Then lean back in their dining room with their in-house stout (a mildly caffeinated blend that features notes of chocolate and coffee) and enjoy some old-school music videos.

Phil & Sebastian Coffee Roasters: Created by two over-caffeinated engineers, Phil & Sebastian's prides itself on serving up the kind of coffee that’s so well-balanced that accruements like milk and sugar aren’t needed. (But don’t worry, I checked, if you ask for almond milk they won’t look at you funny.) Add a pastry, like the perfect peach and lavender tart, or try an avocado toast, and breakfast is served. Bonus: Across their five Calgary locations, the company has partnered with the Market Collective to showcase goods and products from local artisans.

Foreign Concept: Calgary’s got a sizable Asian population with an impressive slate of restaurants to match. At Foreign Concept, chief Duncan Ly fuses traditional Vietnamese flavors with familiar Canadian dishes. A twist on poutine featuring sweet potatoes and miso might actually be a culinary United Nations. Vegetarians will be happy to know that most of the appetizers are meat-free. Meat eaters will be happy to know that the duck reportedly “falls off the bone.” (Alas, as a vegetarian, I cannot confirm.) And cocktail lovers will be happy to know the drinks are straight-up delicious. Try the China Rose, which features a refreshing blend of benedictine, gin, maraschino liqueur, and rose water.

Lowen’s Natural Skincare Products: Fun Fact: Calgary is one of the top five producers of honey in the world. Not only does the stuff taste delicious stirred into your tea, the sweetener’s antioxidants have been known to have a lovely effect on skin. Harness the power of the bee with Lowen’s line of skincare, which includes instantly softening lip balm (philanthropic bonus: A dollar from the sale of each lip balm goes to bumblebee rescue in the area), all-natural shampoos, and exfoliators. Not down with animal products? Good news—they also have a completely vegan line.

Camp Brand Goods: Go here for unfussy sweatshirts, graphic T-shirts, and cozy fleece. Yes, they also sell spice kits and food, but with their bright colors and simple design, Camp Brand Goods means you don’t have to go out to the mountains to get in touch with your wild side.

Inglewood District: Who says every moment of your vacation has to be scheduled? Make like a local and spend a Saturday wandering around the Inglewood neighborhood. (Rosso coffee in hand—naturally.) The area is like a choose your own shopping adventure. Hunt for 45s in Recordland’s chaotic backroom. Swing by the Livery, an old barn turned artisan showcase where you can find jewelry, clothes, soaps, and candles from a host of local companies. Dive into Phoenix Comics for some reading material. Discover new household items you didn’t even know you needed at Uncommons. Then once you’ve worked up an appetite, stop by Without Papers for their signature truffle oil pizza.

Sled Island: Calgary has a strong local music scene and a passion for art to match. (Feist, Chad VanGaalen, Braids, and Lisa Lobsinger of Broken Social Scene have all called it home.) Created in 2007 as a way to support the home team and encourage artists to visit that would usual favor tour stops on the Canadian coasts, Sled Island has blossomed into a full-fledged art festival featuring music, comedy, and visual showcases. Previous notables to grace the stages of Sled include Flying Lotus, DIANA, St. Vincent, Peaches, Julia Holter, and Jesus and Mary Chain. Like SXSW without the intense branding, venues across the city are transformed into festival stages, so expect a strong dose of local flavor, including the most Canadian venue to ever exist: the flag-draped Royal Canadian Legion. The event goes down every year in late June, so be sure to check the website for dates and ticket info.

Calgary Tower: Calgarians (the actual name for people who live in the city—not a forgotten Game of Thrones family) like to brag that the Calgary Tower is the tallest building in North America. It is… well, it is if you count elevation rather than actual height. Either way it’s an impressive view and a worthwhile stop. Head to the top for a tipple and time to contemplate the deeper things in life. Or just think about your laundry, we’re not here to judge.

Studio Bell: Yup, Canada is a great place for music. (See: Arcade Fire, Drake, Leonard Cohen, Nelly Furtado, The Weeknd, and Metric.) Wanna get a better perspective on Canadian music past and present, and, well, music, past and present as a whole? Head to Studio Bell, home of the National Music Centre. Inside the elaborately swirling building you can find a hybrid museum and performance space that houses both memorabilia (Corey Hart’s sunglasses, anyone?) and a fleet of vintage instruments, some which date back to the 1500s. (Plus Elton John’s piano, because why not?) But this is far from a stuffy hands-off experience. Through a series of interactive exhibits you can test out instruments, try your hand at mixing a Tegan and Sara track, or even jot down a few thoughts on the power of music. Thanks to funding from corporate sponsors, there’s also a continuous artist-in-residency program, where musicians from every genre can record in-house using nearly every one of the centre’s fleet of instruments.

Banff National Park: Fancy a day trip? Canada’s oldest national park Banff is located 100 miles outside Calgary. Year around, the UNESCO heritage site has the kind of scenic views that seem ready to launch a thousand landscape painters. Go spelunking to see caves filled with bubbling thermal waters, bike through their legacy trail, or go bird watching on one of the park’s numerous lakes. Not really into the whole outdoor sport scene? Lay back at the Upper Hot Springs, where the water filled with sulphate, calcium, bicarbonate, magnesium, and sodium has been used for over a century to cure a laundry-list of ills.

NEXT UP
Ask A Witch
Ask A Witch: How To Survive The Holidays With Hoodoo Magic
Culture
The White Lotus Will Return For A Third Season
Entertainment
20 Spiritual Gift Ideas For An Aspiring Witch
Culture
Kim Petras Defends Working with Dr. Luke (Again) As Kesha Trial Approaches