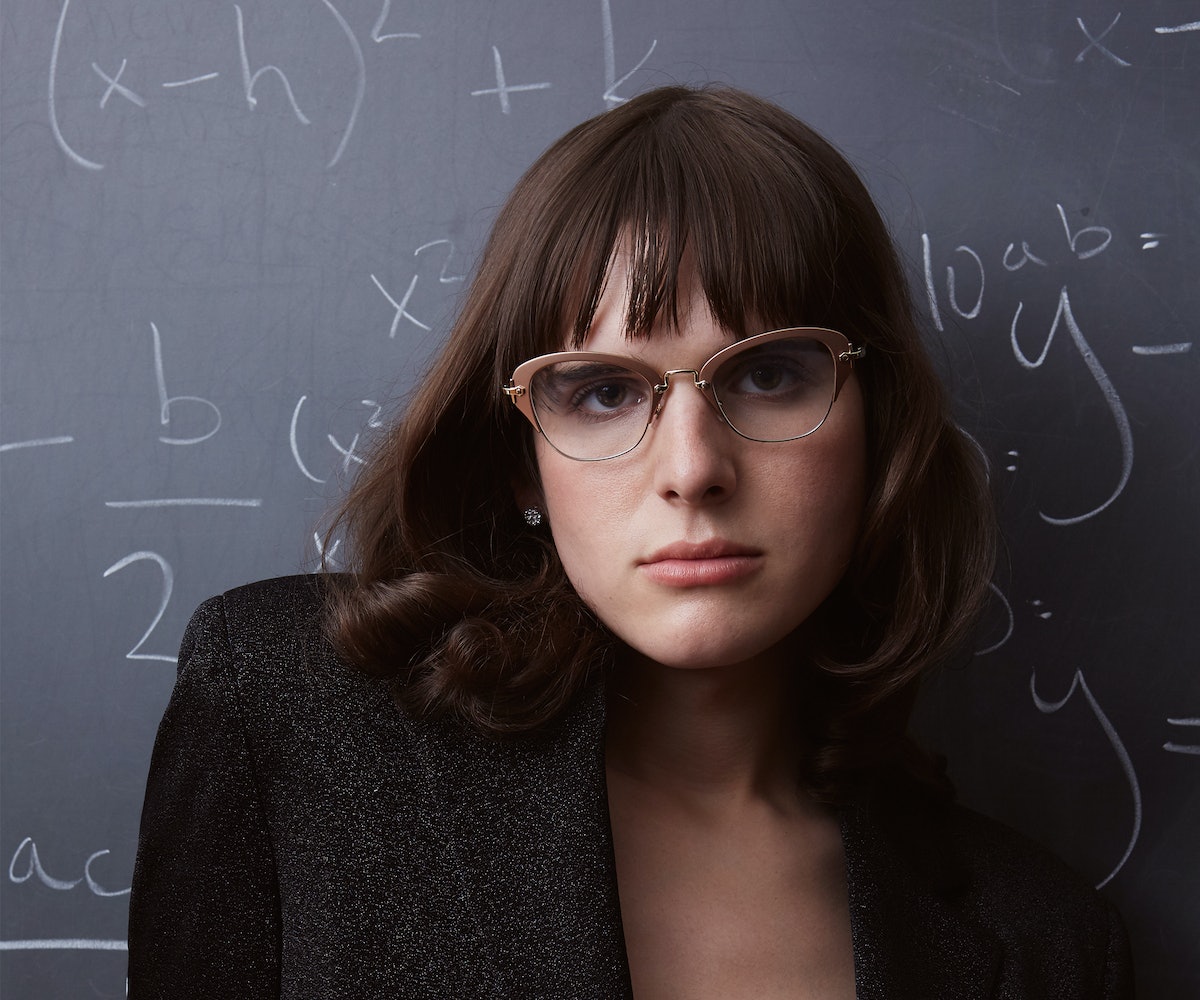 Glasses are now undeniably at the forefront of cool. And premium eyewear brand Luxottica makes frames that will have everyone staring for all the right reasons. The Italian company has tapped a few of this generation's coolest trendsetters that intersect the fields of music, fashion, and design to star in its latest campaign: Class of 2016.

This means that people like Hari Nef, Iris Apfel, Rejjie Snow, Mike the Ruler, Gray Sorrenti, and Mae Lapres are putting a modern spin on traditional high school stereotypes. Emerging or established, these style leaders and creative mavericks are changing the way that everyone sees the world. If anything, the campaign will make you wish that yearbooks actually turned out this good. (If you're currently on your yearbook committee, take notes.)

We recently spoke with Nef about being the leader of the pack in the Class of 2016, and how her perspective on the world at large has changed since she was a high school student. (Shout-outs to the Class of 2011!) Read the Q&A while you flip through the campaign images in the gallery, below.

The Class of 2016 campaign is about turning on traditional high school stereotypes. Could you tell me about the role that you are portraying in this?

I am the teacher. I thought it was really interesting that they put me as the teacher because a lot of people tell me that I've taught them things, and that the work that I do has been instructive or educational to them. That was never something that I set out to do, and it was never something that I did intentionally. I never was like, "Oh, I'm gonna school and teach y'all," but I found it really affirming... I also felt really weird; I'm like 23 and a teacher. But it was cool. I was honored that they designated me as the teacher. It sort of put the way they saw me into a perspective that I had never really seen for myself. At first, I was really confused, and then I thought about it a little more, and then I was just really appreciative that they wanted me to be the teacher. I think there are a lot of people to learn from, I just never thought of myself as one. So I was humbled by that.

What made you want to get involved with this campaign?

I thought that the eclectic casting and sort of the coming together of a mix of models, creatives, musicians... I mean, just hearing Iris alone was in it was the max, where I was just like, "Okay, sold, let's go." But I think that it felt authentic, and it felt contemporary, and it kind of just sounded like a group of people that I would want to hang out with for a day, it sounded fun. There are people who I admired in there. So I was like, "Yeah, why not? It sounds like fun." It was pretty much a no-brainer.

My high school experience was generally positive but really intense overall. I think when you're in high school, you really kind of get this push from your friends, your community, and your family just to figure out who you are and stake your claim on something. It's kind of like you're turning into a mini-adult. I wasn't totally sure who I was, but I kind of knew what I wanted to do. So I just threw myself into doing stuff. I never really felt like I totally fit in with my student body at large. I definitely had some great friends, and I was able to find a really a self-definition that helped me through the things that I did, through the classes I took and the extracurriculars I did. I was just always doing stuff, and I didn't sleep for four years, and I ran myself into the ground. It was a little dark at times. But also, I don't know; I think high school is where I learned that what you did was more important that who you allegedly are, because who is anyone, really?

I graduated from high school five years ago and am the same age as you. I just feel like high schoolers now are so different than from when we were in high school. Not just with the fashion, but the access to technology and the fact that Finstagrams are a thing now.

My sister is 15, and she is like an alien. Like, I love her, but she is in a league of her own. I'm sure there are many kids like her, but I love having her as someone close to me to get a glimpse into that generation. It's interesting.

If you could give one piece of advice to someone who is in high school right now, what would it be and why?

Take your time. I think that we live in a "goals" generation. I think that I sort of came up in the beginning of it, and I think that now we are like fully generation "goals." You have so much access to media and what other people are doing, what your peers are doing. I feel like I've personally spent hours and hours on social media just looking at people and seeing what they're doing, and I'm like, "Oh my god, goaaalllsss! Why aren't I doing that? Why can't I be that?" I'm an adult with autonomy and my own sense of free will. I can't imagine how helpless "hashtag goals" must feel to someone who lives with their parents, is not financially independent, and like whatever, whatever.

I would encourage high schoolers to not rush to the finish line of declaring who you are or saying what you're going to do. Give yourself time and follow your instincts. Don't follow those cues from outside of yourself. I guess another way of saying this would be: "You are enough on your own to be great, or to be cool, or to be beautiful, or to be whatever." I just think that everybody has already got whatever it is that they'll eventually need to feel cool or feel comfortable with themselves. That's a process that takes years and years and years, and it's not a quick fix. You know, I remember being in high school and feeling so helpless and feeling that what my reality was then was going to be my reality forever or a reflection of it. I'm really skeptical of "it gets better" propaganda because it doesn't always get better, but it does get different. It gets weirder and it gets more complicated, and I think it doesn't always get better, but you get smarter.

I was so ready to get out of high school, and then being in college I was like, "Wow, there's so much freedom."

I still remember what that feels like. I was so frustrated. I was really depressed my senior year of high school. I wanted out, but I didn't know what out meant and I just felt like totally helpless.

What was it like working with everyone on this shoot?

In a way, it kind of felt like I was actually in high school a little bit. We were in a cafeteria just sitting around all day waiting to be shot. It was a bunch of people I didn't know in a cafeteria, and I was sitting around. I felt like, "Maybe I should go and talk to some people," like it was definitely an ice breaker. Obviously, being in a cafeteria sort of puts you in a certain headspace, so I found that kind of amusing.

This campaign also has a lot to do with living authentically. What does that mean to you?

Living authentically is living specifically. Living safely, living with a deep respect to the feeling in your gut, not so much the voice in your head. I think that living authentically is this lost art that is coming back into the mainstream and consciousness. It's a phrase that I never even heard until just a couple of years ago, and I think that those who live that way tend to be rule-breakers. They tend in ways to be seen as rebels. They tend in ways to go against the norm because the norm is a very narrow thing.

I feel like the norm is inauthentic to the vast majority of people. I think that you have to look at your options for life. It's like, "What's available to me? What can I do? Who can I be? How can I be?" And you have to consider not just the easy option, but all of the options. I think to live authentically is to make life choices, not just something that's easiest, but based on what is most comfortable, most joyful, most safe, most sustainable, and most fulfilling to you. Regardless of what other people say and regardless of how other people are going to feel about it. That's how I feel.