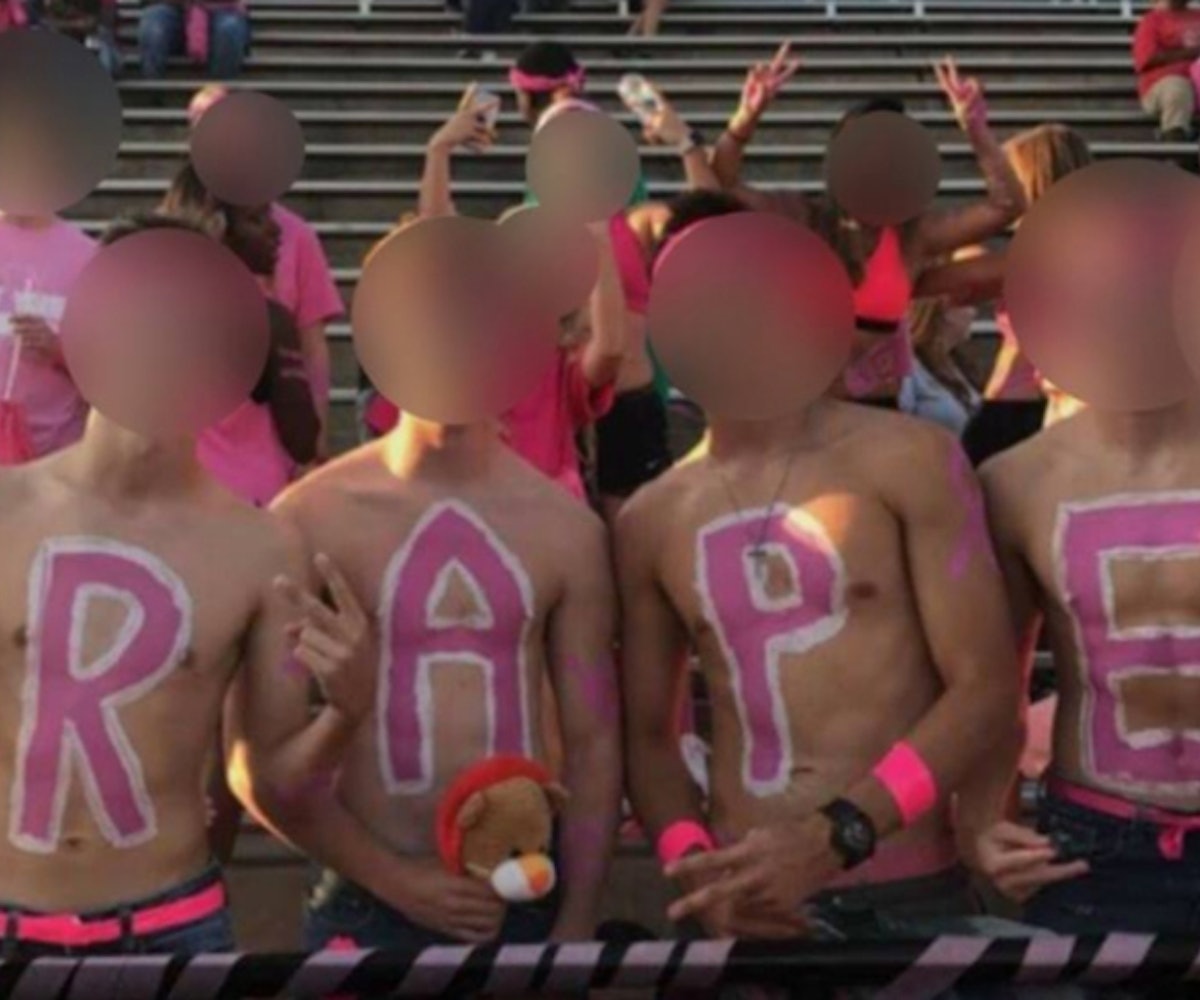 It should go without saying that rape is nothing to joke about. Still, this past weekend, four South Carolina high school students spelled the word out with painted letters on their chests during their school's annual breast cancer awareness football game.

Two sophomores and two seniors were among a group of Westside High School students who painted their chests to spell out "BUMP CANCER." Their seemingly well-meaning stunt quickly evolved into a game of scrabble, with the students spelling out different words using their respective letters. Somewhere in the mix, letters "R," "A," "P," and "E" stood next to one another.

The moment was captured on Snapchat and shared with the caption "What we do to Daniel," implying they rape an individual named Daniel. That's, um, not funny. Rape, implied or other, is never funny. Their position and privilege in the world allowed them to feel safe making a rape joke. Westside High's director of external affairs Kyle Newton has condemned their actions, telling the Huffington Post "there is no place in any school or in any community for those types of actions."

Indeed there isn't. What there is room for is consent education. A 2015 survey by the National Union of Students found that two-thirds of the 2,500 students who participated were not taught about consent in their sex ed classes. A Planned Parenthood survey from the same year discovered many people still do not understand fully where the line of consent is. "Most people have not received any education about what consent is, what it looks like, or how to do it," Dr. Leslie Kantor, vice president of education at Planned Parenthood Federation of America, says. "It’s no wonder there is still disagreement and confusion."

Thankfully, McMaster University's 2015 posters outlining what consent is are still making their way around micro-blogging sites, like Tumblr and Pinterest. The posters, seen below, are exceptional in their execution. They make it clear what consent is and who it affects. (Spoiler alert: it's everyone, regardless of gender identity.) What's more, they challenge the "no means no" and "yes means yes" definitions because someone who is under any influence—alcohol, marijuana, drugs—cannot give proper consent. They also point out that consenting to one thing does not mean consenting to everything; all parties must be in agreement for anything to progress, each and every time.

The more we share these posters and hold people accountable for their insensitivity, the more we can arrive at a place where consent is a universal truth.