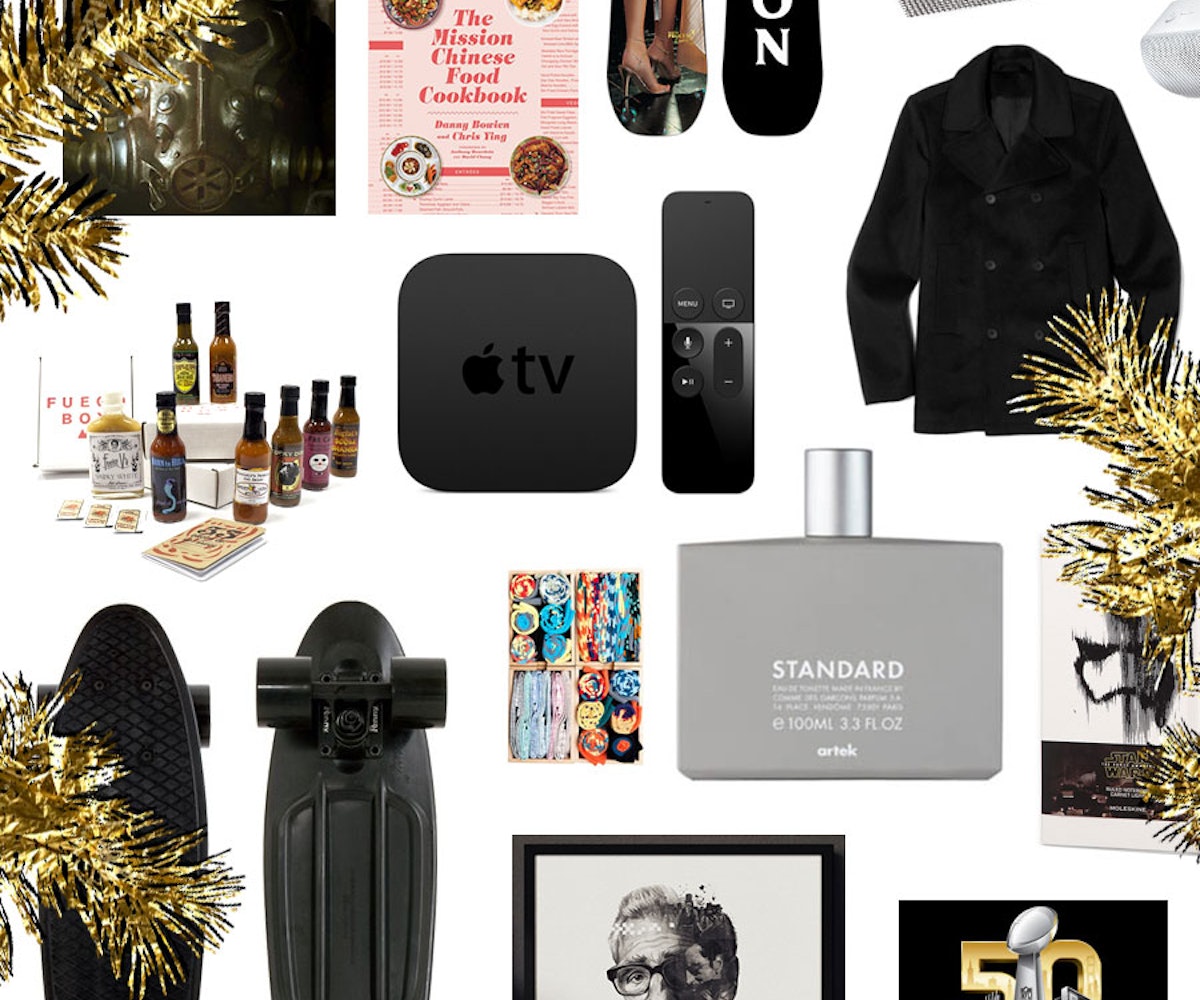 Whether it's a boyfriend, a brother, or just some random dude on the street, buying a present for a man can be a stressful occasion, especially if you aren't one. What do these strange creatures enjoy? Is it something they can wear? Something they can drink? Something they can brag to their other man friends about owning? Do they want a ball to throw? A cigar to smoke? A crossbow to kill stuff with? So confusing, right? It is with that confusion in mind that we've compiled this list of rad stuff for you to consider when shopping for that special guy in your life.

The Pax 2 vaporizer is one of the slickest and sexiest in the game. Ditto for The Weeknd. Put them together and you've got this limited edition vape that lights up and plays "The Hills" when you pull. You won't be able to feel your face.

Former Grantland writer Shea Serrano—who's got a huge Twitter following for a non-famous person—goes hard by laying out an argument for the most important—not the best—rap song of every year since 1979. The beautifully designed and illustrated book will deeply expand your knowledge on the most influential American art form to emerge in the last thirty years, and your guy will finally be able to explain to friends why Mike Jones' "Still Tippin" was a bigger deal than "Jesus Walks."

Listen, tickets to the 50th Super Bowl in San Francisco won't be easy to get. But if you manage to do so, the person you give them to—provided they're a football fan—will love you forever. Guaranteed.

The first Beats Pill under the Apple umbrella, and you can tell. A much more streamlined design—gone is the garish red Beats logo from the original Pill—and new and improved sound make this one of the best portable audio options on the market.

If you don't think guys like to cook, get your head out of the '50s. And what better reason to get in the kitchen than to test out these ballsy spins on traditional Sichuan cuisine from one of New York City's hottest chefs. Emphasis on the heat.

There isn't a hot sauce lover alive who thinks the local grocery store is an acceptable place to purchase unique condiments of the blistering pepper variety. Instead, this subscription-based service that specializes in small-batch hot sauces from artisanal makers from all over the country is the scorched road to your guys' heart(burn).

To celebrate this tiny movie that no one's ever heard about and even less people want to see, Moleskin released a limited edition version of its iconic notebook featuring a far less iconic character on its cover. Good luck selling these, guys!

2015 was the year that Kurt Cobain stormed back to the forefront of the cultural conversation, thanks in large part to Montage of Heck, director Brett Morgen's tour de force documentary of the late Nirvana frontman. This definitive box set that also includes a 31-track soundtrack featuring unreleased Cobain solo material, plus a 130-page hardcover book, is a must-have for those who haven't quite been able to let go, aka all of us.

Every gentleman needs a slimming peacoat, and Everlane's version is both affordable, expertly crafted, and yes, timeless. Any questions?

There isn't a dude we know that actively enjoys cleaning their apartment. Some might not mind it, but most hate it and will do anything to avoid it, even if that means living in filth. The new Roomba 980 is a back-from-the-future robot helper friend thing and one of the smartest and most useful robots on the market. Yes, it costs almost a grand, but cleanliness equals godliness, and godliness is priceless.

The best noise-cancelling headphones on the market, bar none. The price tag is hefty, but if your special guy is an audio freak, DJ, or is tired of hearing you complain about your boss, these are the way to go.

Several of our dude friends swear by this subtle cologne, which is probably why it's often out of stock—get it while you can. Instead of punching you in the face, this nuanced mix of metal and wood will make whoever wears it smell like they've been hanging out in a Scandanavian design shop for the afternoon.

This blockbuster game set in a horrific dystopian future has already grossed nearly a billion dollars, making it one of the most popular games of all time, but there's a chance the special guy in your life has been holding out as test to see how well you know him. Well congratulations, you just passed.

Apple has been promising to change the TV game since the days of Steve Jobs. 2015 marks the year they finally did, with a gadget that won't just make streaming shows more addictive than it already is, but that will transform your television into an app-centric entertainment hub. Apple claims that "the future of television is here." They're not wrong.

With several locations around New York, Fellow Barber is quickly becoming one of the top destinations in the city to get a proper trim. Therefore we implicitly trust them to put together a banging shaving kit. They've done just that with this collection of products that includes two classic mens' grooming pieces: a Filson Travel Kit and an Edwin Jagger Barley Double Edge razor.

You might think there's something Fisher-Price-y about a plastic skateboard, and if you're a grind-or-die skater, then that's probably true. But Australian company Absolute Board isn't making products for those dudes. They're making them for types who might be just getting into boarding and want something light, durable, and smooth. For the guy whose main priority in life isn't nailing that kick flip, but still likes a good ride.

For the film buff who's outgrown the Goodfellas poster in his dorm room. Printed on a beautifully textured, acid-free cotton paper, this design captures the cinematic mastery of Scorsese. But if he isn't right, the series includes other legends, like Lynch, Burton, Hitchcock, and of course, QT.

We'd never recommend giving someone a gift as cheesy as a snowboard with a naked woman on it, no matter how douchey they were. But this collab between Playboy and Burton did something smart by covering up any nudity with rad designs by tattoo artist Christ Nunez. We're not mad at it.

Black and white socks are almost as dull as shopping for them, so Nice Laundry has killed two birds with one stone-filled sock. The company's sole mission is to transform a man's sock drawer into a cornucopia of color and design. The highlight subscription is their best bargain, coming with 12 pairs of premium cotton blend socks and 6 pairs of performance athletic socks. Awesome.

What’s better than the comfort and freedom of a sandal built into a stylish cold weather shoe? Nothing. Sanuk’s Koda Select is made with durable vegan leather and has a flexible footbed for added comfort. The beach is just a state of mind and these kicks will keep it locked in all year long.

NEXT UP
Life
ask a witch love spells
Life
Rachael Finley Never Got A Guide To Life, So She Wrote Her Own
Entertainment
Soccer Mommy, Wet Leg, & 48 More Artists Made An Album For Abortion Rights
Life
NYLON Newsletter: October 3, 2022