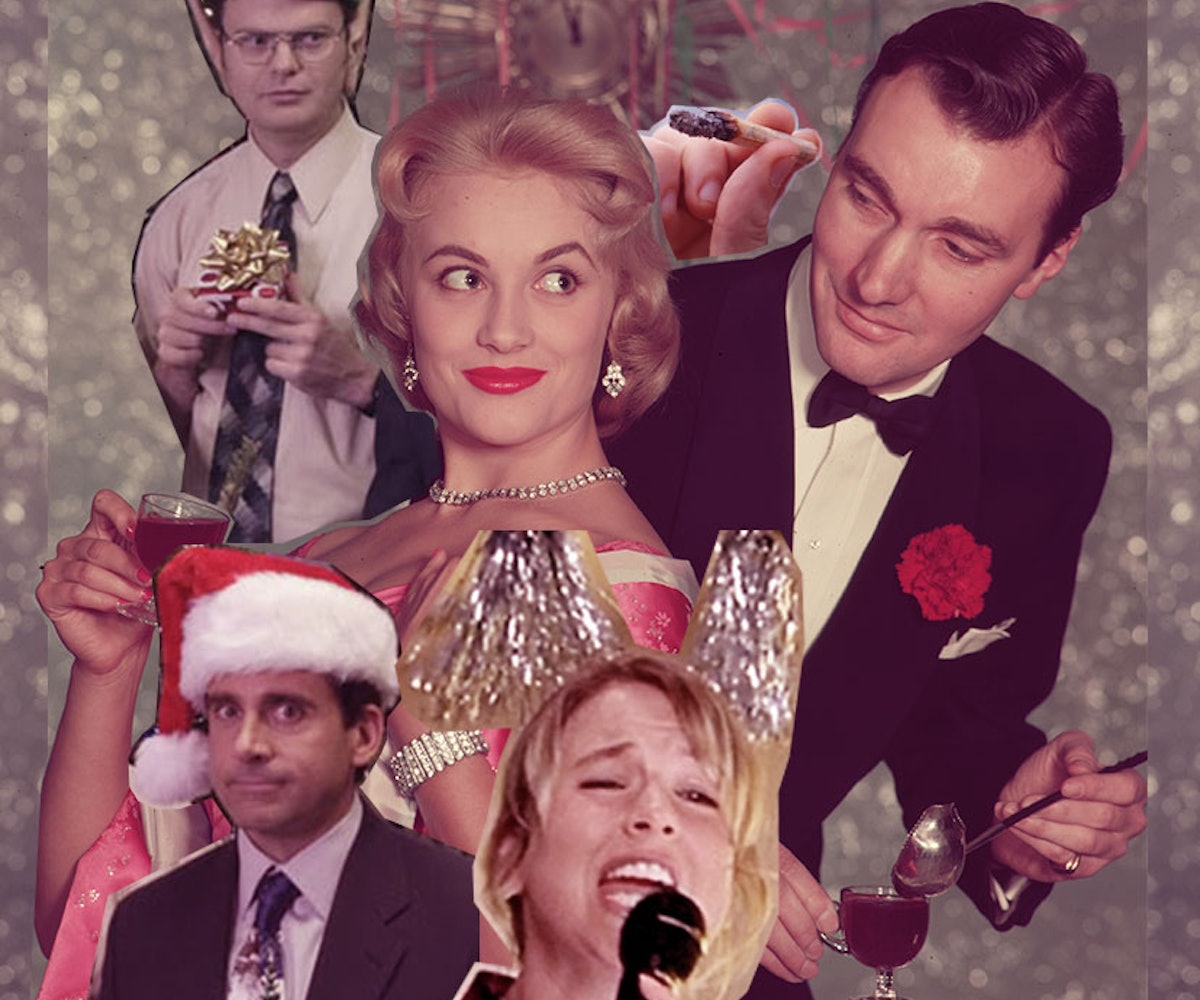 Let's be honest, modern office life can be a cruel, daily slog of endless drudgery...a grim metaphor for the embrace of the eternal silence that awaits us all. Come December though, the suits upstairs rub a few dollars together to toast you and your fellow employees. It's time for revelry, awkward conversations with your boss, and enough champagne to hit on your cubicle crush (wait, maybe not that last one). Yup, we're talking about the holiday office party!

While it might seem like a harmless excuse for letting off steam, the holiday office party can be an experience fraught with tension. It's not just a social gathering with your colleagues, but a mine field of social disasters waiting to happen (yikes!). We've bundled up a few tips to ensure that the only ugly thing to come out of the experience...is your Christmas sweater.

Sometimes the best solution to a problem is the simplest one—avoiding the party altogether. Got a getaway already planned or feeling a bit under the weather? Don't feel obligated and do you. Bonus, it's pretty much the only infallible choice to avoid causing a fuss.

I know, I know, we're contradicting ourselves, but no one likes the person who doesn’t socialize at work. It makes you seem aloof, and superior. Admittedly, it's kind of hard to pull off both of these first two tips at once, so if you have to choose one, this is probably the better option.

Don’t go too much though, you know?

At any party (and especially a work party) being the first to arrive, or the last to leave is an amateur move. The former can seem desperate, and the latter can seem a different type of desperate. Instead, aim for the creamy nucleus of fun. Arrive after the first round of cocktails have been downed, and dip before you're only left with drunks circling the crudité like vultures.

Socialize with everyone, but within boundaries.

This is a good chance to chit-chat with a higher up that you’ve always wanted to get to know better, or, if you’re one of those in charge, to make yourself seem like a relatable human being. It’s important not to stay too isolated in your normal work cliques at a function like this, and socializing up and down the chain of command is to be encouraged—but know your limits.

Don’t hit on anyone.

Is it finally the night to break the simmering tension with your colleague who said a polite good morning that one time in the coffee room eight months ago? Maybe after enough sparkling wine, it actually could be. Just remember that workplace romances—and worse, workplace hook ups—have never once worked out in the history of the universe. Ok, maybe it did for Jim and Pam, but can you blame us for wanting to tread carefully? After all, what have you got to lose besides your job?

One way to make sure you don’t wind up in the supply closet with your office crush is by limiting your alcohol intake. Wow, great advice, right? No one’s ever thought of that before. But if you time things correctly, don’t stay too long, and don’t get into any passive aggressive altercations with anyone, you should be able to keep yourself under control for a couple of hours. Before you know it, you’ll be back home passing out on your couch with a bottle of rosé, which is what you really wanted to be doing in the first place if it weren’t for this dumb party.

Don’t swig an entire bottle of chardonnay, grab the microphone from the boss, proclaim all of the reasons you don’t respect anyone you work with, then fall face-first into a steam tray full of warm ziti.

While I legally can’t get into it, just trust me on this one.

You may think you have nothing else in common with your co-workers other than where you share desk space, but did you know that each and every one of them is an actual unique human being with thoughts and hopes and dreams and interests outside of sitting at their computer doing whatever the hell it is they do? One thing you might talk about with someone—and this is kind of a crazy suggestion—is whatever they’re interested in talking about.

Do talk a little shop, though.

See why these things are so hard to deal with? A lot of contradictions at play here. It’s fine to chit chat, but if there’s something that’s been hanging over everyone’s heads, don’t bring that up now.

You might think they don’t know—haha, these old dorks have no idea how stoned I am right now—but they know. Even your corniest, old-ass VP was a young person once.

Don’t gossip the next day.

So someone broke every one of these rules simultaneously? That’s pretty impressive, to be honest. No one likes a narc, though. You know what I’m talking about, Karen.

NEXT UP
Life
ask a witch love spells
Life
On The List (With Melissa Rich): The Highs & Lows Of Solo Partying
Life
Your October 2022 Horoscope Brings The Party — And The Drama
Life
Rachael Finley Never Got A Guide To Life, So She Wrote Her Own