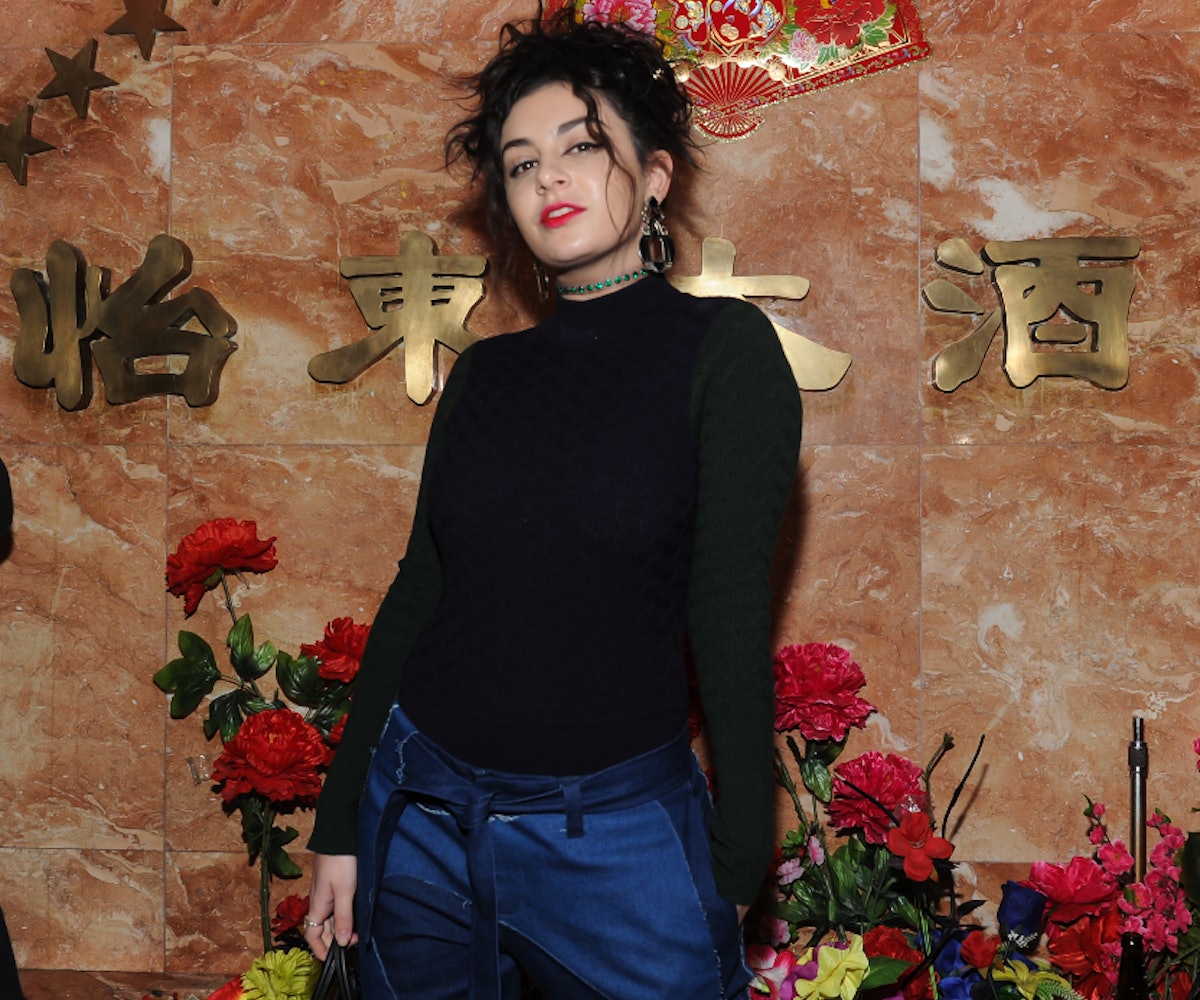 "I just want to apologize," says Charli XCX, following a full-blown yawn. "I just came off a flight and I’m trying to pop my ears—I’m not yawning!" But even if she was, the in-demand British pop star could be forgiven. Her schedule these days is jam-packed—she's currently making the rounds at New York Fashion Week—and when we spoke to her, she had just flown in from her new home base in Los Angeles to Las Vegas for a quickie performance of her many hits. The occasion was the SLS Las Vegas (housed inside the old Sahara) joining the Tribute Portfolio, Starwood's latest collection of luxe hotels with an indie spirit. It was the kind of event that a performer like Charli XCX instantly infused with not just an infectuous spirit, but also with credibility.

Charli XCX, who knows her way around a blowout pop hook better than most artists working today, is in the odd position of having her two biggest hits—Icona Pop's "I Love It" and Iggy Azalea's "Fancy"—techincally belong to other artists, despite the fact that she co-wrote and performed on both songs. XCX herself has written and toplined a number of pristine pop gems—"Boom Clap" and "Break the Rules" among them—and yet she remains a performer whose star has yet to go supernova. We asked the 23-year-old singer and NYLON cover girl what she thought about this, and her answer led to an extended meditation on not taking shit from anyone and pretty much doing whatever the hell she wants.

Where do you think your knack for writing great pop hooks comes from?

I don’t know, really. I actually don’t love a lot of the songs that I used to play. I’m making a new record at the moment, so my head’s so in that. I think that happens a lot with artists, like everything from the past is, “Oh, I hate that,” because you spent so much time time touring it. But when it comes to writing, I don’t know. I don’t have a formula or anything, I just do what I feel is good and what I feel that I like at the time. I will say that I write more bad songs than I do good songs.

Where does the inspiration for these songs come from?

My personal life. Sex and drugs and partying and boyfriends and all of that.

While I’m creating the song, if I can imagine the music video then I feel like it should be mine because I have a visual connection to the song. If I don’t, then I won’t. Sometimes I get businesswoman-like and I want to sell the song, I want to pitch it out and everything. I guess right now I’m just writing for myself.

You've written and performed what I consider to be some of the best pop songs of the last five years, and yet you haven't reached the stratospheric pop star levels of someone like Taylor Swift. Does that frustrate you?

I’m not frustrated, because I’m not really one to play the game.

What game is that?

Some people are really good at this job because they can turn on the charm and they can hide when they’re feeling upset one day or feeling depressed. They can really put a face on and do it. I’m never like that. When I’m in a bad mood, I’m in a bad mood. If I don’t want to do something, I don’t want to do it. I’m kind of annoying like that, I guess, for a record label to manage. I’m also very stubborn and I take control of every aspect of my career. I manage all the artists, I write all of my own songs, I creative direct my stage show, I creative direct my lighting. I’m very much a control freak and I think that sometimes that works not to my advantage. Maybe that’s why. I definitely want to continue to make music and I just never want to sacrifice my creative integrity for the sake of a radio hit.

Have you had to fight to maintain that control?

Yeah. I’m really lucky to work with a label that’s really cool and gets me. But definitely when I was younger, when I first started working with them, before they really knew me, there was all of that tension. I think particularly, it was like an automatic stigma of being a young girl in the music industry. Sometimes I don’t think it’s even people’s fault that they think or automatically go to that stigma, where they’re like, “Oh, we can mold this person and shape her.” I think that sometimes that just really happens and it’s a shame, but that definitely nearly happened with me in the beginning. I was just very clear and very stubborn.

How did you make the mental switch that led you to take control of your own career?

There’s always a time working in the music industry where someone’s going to tell you what to do. It’s the nature of the business. Someone’s always above you, trying to tell you what to do. You just have to establish that power struggle. I remember when I first signed to my record label when I was 16, I was like, “These are my bosses.” That’s how I saw it. Then it only took me two months to realize that actually, I’m my own boss. Not even my own, I’m their boss. They work for me. They’re trying to sell my record. There’s always that moment where you’re figuring that out, and that’s fine. You’re allowed to figure out the moment just as long as the end result leads to happiness.

There was a recent incident where a music publicist was accused by several female artists and other women in the music industry of sexual harassment.

Yeah! I was literally just reading about that the other day.

Have you experienced that as a young woman in a male-dominated industry? Have you had to deal with that bullshit?

I mean, I’ve never had to deal with all of the people I don’t really work with, which is amazing, but I definitely have been around people in the music industry who sometimes acted inappropriately. Not like in a sexual harassment kind of way, but in a way where I felt uncomfortable. But, I’ve always called them out.

Just because I wouldn’t want anybody to fuck me over. I’ve not been subject to sexual harassment and I know I’ve been reading a lot of the conversations that have been going on online about it. Obviously, a lot of these women have been keeping it inside for a long time and it shows how tormenting it is, and it’s so sad that it happens so frequently and so much in the music industry and other industries, too. I think it’s obviously really shit. I’m glad they called him out.