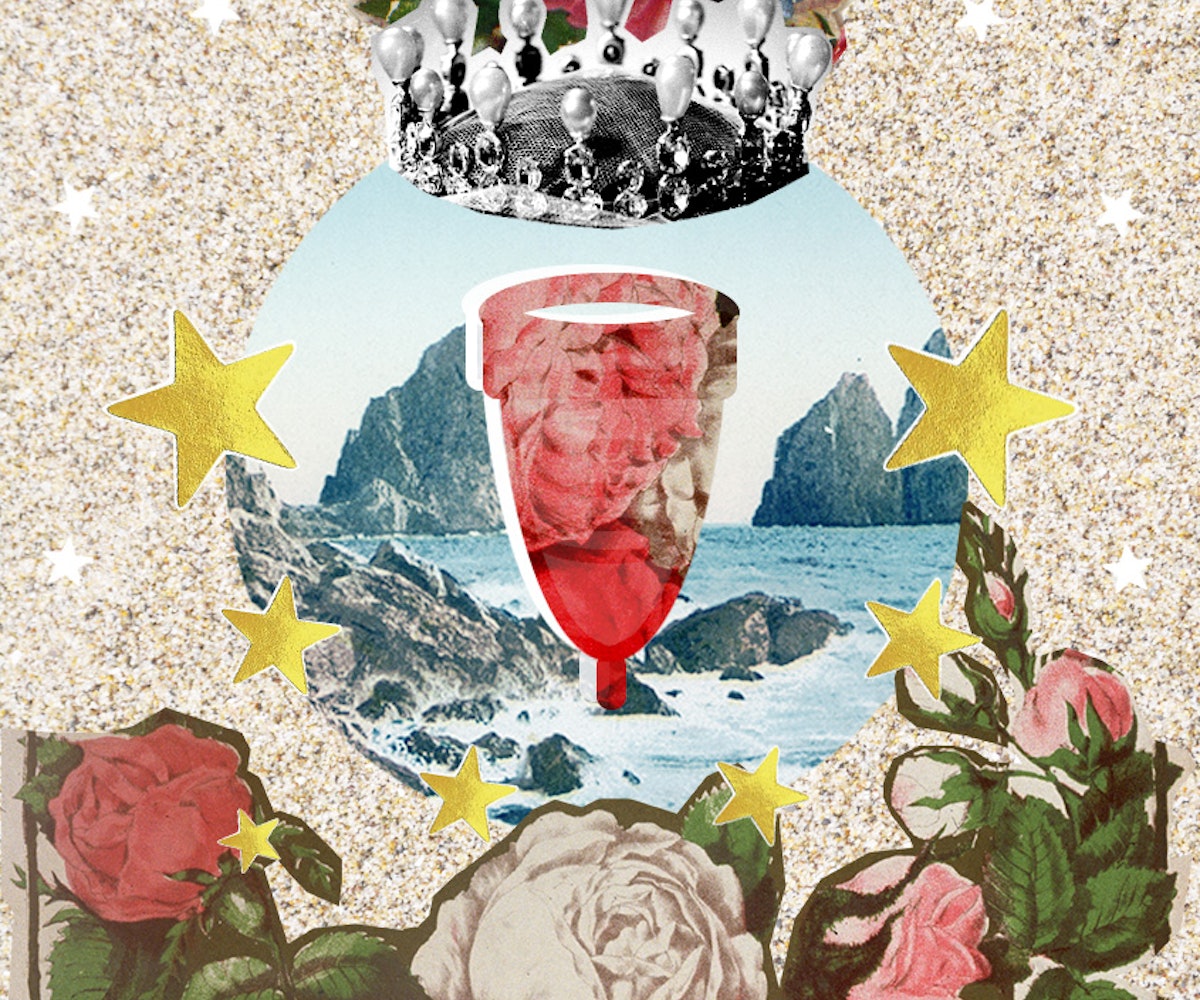 When Kiran Gandhi ran the London marathon with blood dripping down her legs, it caused a collective aha moment. Suddenly, this monthly thing that cis-women and people assigned female at birth actively work to conceal was out in the open, and nothing bad happened… Which makes sense, if you think about it. After all, the commodification of menstruation is centered around hiding it: Catching the blood before anyone sees it, dulling the pain so you’re not in fetal position at your desk, or skipping it altogether with birth control. Sure, getting your period sucks—it’s messy, it hurts, it makes you break out or feel bloated or both—but that doesn’t mean visual evidence of it is intrinsically inappropriate. Nor is it necessarily as wildly unsanitary as it's made out to be. It doesn't make you dirty to have your period. If so many of us are bleeding, why do we pretend that none of us are?

And it’s not even like the popular methods we have of concealing the blood are all that great. Pads, if we’re being honest, are glorified diapers. And tampons are literally dangerous: Just recently model Lauren Wasser made headlines with her story about the toxic-shock syndrome, developed from a tampon, which led to the loss of her leg.

Personally, I opted out of tampons in favor of a Diva Cup before I hit 20 after a coworker gave me the hot tip that not only would the circular, body-conscious shape make my cramps better, it would make everything else easier on my period: Like, um, going to the bathroom. And having sex. Because there’s nothing that gets in the way of those two fundamental things like a dangling tampon string, amiright?

It’s really fun to tell people that I use a Diva Cup, because other women who get their periods are either overwhelmed with curiosity or already use one and have strong feelings about it. Either way, as soon as the cup is mentioned it opens the flood gates (ahem) of conversation. The idea of opting out of what the drugstore offers us is so novel, that women seem to momentarily forget that this is something we don’t really talk about in detail, and ask some really specific questions: How big is it? How do you get it in? What does it feel like? And, most commonly, What do you do in a public bathroom? The last time this happened to me was during our digital team’s weekly brainstorm; we literally stopped pitching story ideas in order for me to explain to my coworkers how exactly I insert my small, silicone friend into my vagina.

What women always seem most curious about is the fact that a cup lets you see your menstrual fluid as it accumulates. I’ve always felt like that’s kind of validating: On days when my cramps are particularly horrific, it’s nice to see that there’s a lot more blood (and, honestly, clumpier blood). It’s like, oh, that’s why I feel like I’m dying. And while a Diva Cup, like a pad or a tampon, aims to contain menstrual fluid rather than let it flow freely, it does force you to interact with your period in much more hands-on way. The soft, chalice shape of the cup makes it pliable, which is helpful because to get the cup in there, you have to kind of fold it in half vertically (or at least I do). When it’s inserted, it opens up, and then you have to make sure the lip seals against the wall of your vag, which often involves really getting up in there with your fingers and double checking. It should fit comfortably all the way in your vagina, with the end of it not sticking out at all. You don't have to worry about putting it in too far because your vagina doesn't go on forever—you're not going to lose anything in there permanently. When you remove it, depending on how heavy your flow is, there’s a good chance it’s going to spill, especially the first few times you use it. It is, after all, a cup containing liquid. If you’re not careful, it could empty out on your hands, though ideally, you just daintily dump it out.

This definitely poses a problem in public restrooms, if you have a problem with emerging from a bathroom stall with blood on your hands. I’m pretty comfortable with my period and still not always thrilled about this prospect, especially at work. Also if you get it on your hands, it makes pulling your pants up tricky. But truly, it’s not the end of the world that it gets a little messy. You figure out it. You wipe your hands off with toilet paper or wait for that girl from accounting to leave before you come out, or just try to care less. It’s only gross if you think it’s gross—after all, it came from your body.

I understand that I’m not really selling this that well, so let’s talk about the benefits. For one, money. I’ve had the same cup for years, and I boil it every month to sanitize its medical-grade silicone and never spend money on tampons and it’s awesome. Also, it’s good for the environment—less waste is less waste. And it really does make my cramps better. I get the kind of cramps where everything hurts, so sticking a tampon in there was just like poking a bruise. The cup conforms to my body and I don’t feel it, but not everyone has that experience—everyone has a different shape, and that’s totally normal. For me, it forces me to get to know myself better: Handling my own period in such an intimate way has made me very familiar with all the ins and outs of my cycle, which makes dealing with it less annoying.

So, while I don’t know that I’ll be bleeding my way through a marathon any time soon (mostly because I don’t run unless I’m being chased by angry wombats), using a cup has totally lifted the stigma around my menstrual blood. It doesn’t gross me out, it doesn’t scare me, and I definitely don’t mind talking about it (in case that wasn’t apparent). Everyone should do what feels the best for them. But in a lot of ways, what we’ve been told to do with our periods—hide them, not talk about them—encourages a weird, sneaky kind of self-oppression. If we internalize the myth that periods are gross and inappropriate, we’re not really helping ourselves. I’m not saying you need to, like, store up your menstrual fluid and finger-paint a portrait of your cat with it. But I think we could all stand to be a little less squeamish about something many of us experience regularly—imagine how much you could do with one less thing to worry about.