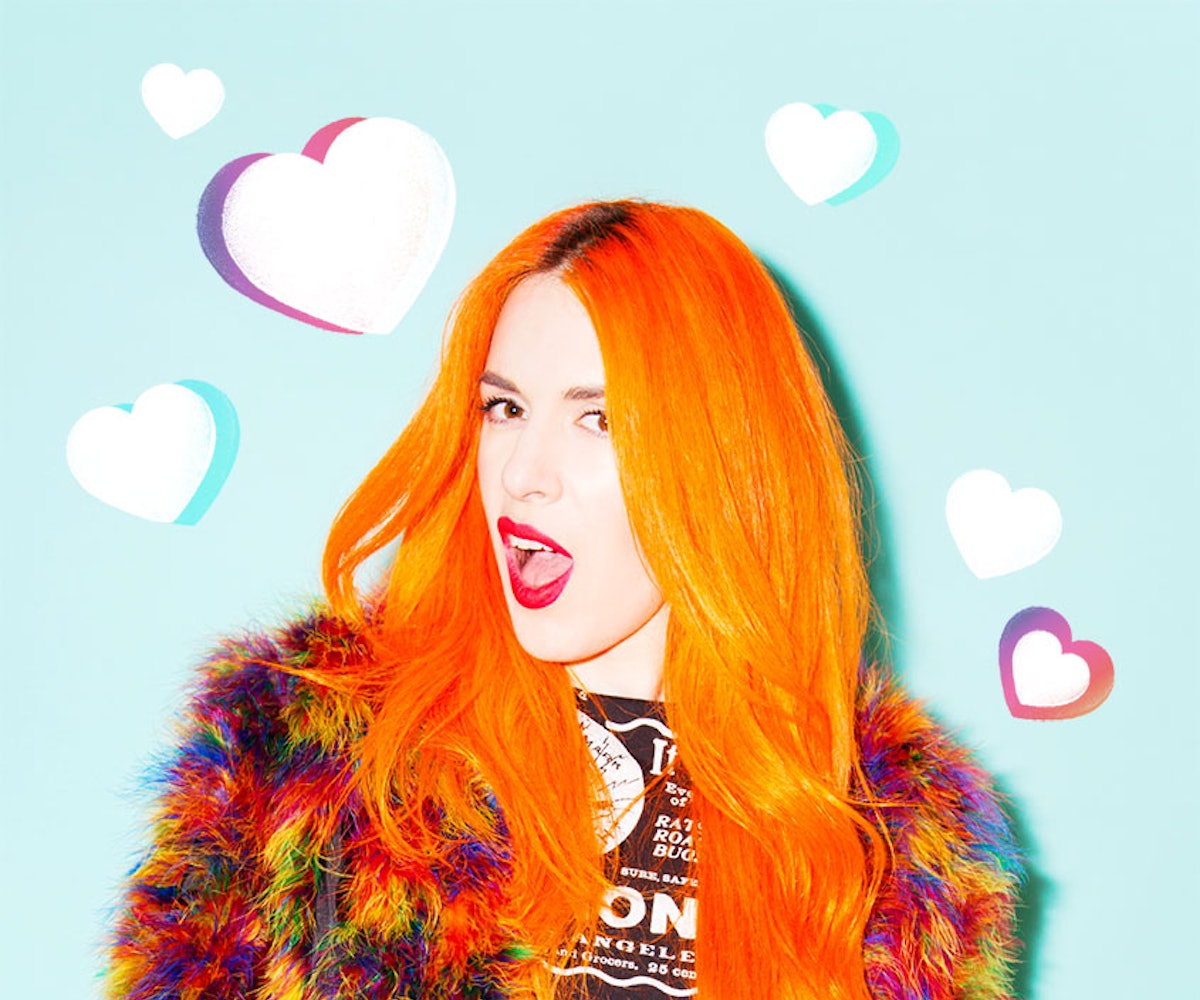 Did I just say that out loud? Am I dying? Is this an out-of-body experience?

Did my best friend just ask me out?

Let me catch you up. Nick is one of my best friends. We “met” as NYU students; while I toiled after class at a major record label, he wrote for the school paper. He stuck out because he had a website (hey, 2001!) and was the only cordial and responsible person I emailed with for work. Years later, I’d go see him DJ with my friends, and I immediately became a fan. I felt like I already knew him, and coincidentally, nobody introduced us because they figured we’d already met. We didn’t actually meet until we both found ourselves at an uncharacteristically jiggy club in the Meatpacking District for the album launch of an artist I was working with on his record label. He sat down next to me and said, “Hi! I’m Nick!” and we talked for over an hour. No games, no “how you doing”—just a mutual excitement that we had finally put faces to names.

Over the next few years, Nick and I slowly became best friends. We had a lot in common: We were two entrepreneurial business owners and creatives in our early 30s, both way too obsessed with pop culture. We’d BBM (hey, 2009!) regularly. He introduced his college-age sister to me so she could have a mentor. Neither of us can pinpoint why, but we would go on very platonic dinner-and-a-movie dates every few months. I sporadically dated horrible dudes during those years, but Nick and I never talked about that part of our lives. His naturally private, gossip-averse nature didn’t lend itself to that kind of thing. I never even knew if he was dating, let alone who!

Besides, I didn’t like Nick like that, or at least I didn’t think I did. Mutual friends would incredulously ask why the two of us weren’t seeing each other. I’d explain that it wasn’t a case of “I don’t want to ruin the friendship,” but the fact that it was always just a friendship. There was no funny business or flirting, but we’d constantly send each other articles about what the cast of Can’t Hardly Wait was up to. I’d be his DJ booth bodyguard, and took him to Katz’s Deli for the first time ever. We’d definitely had our share of long drives and late nights talking about our dreams and plans for the future, but even though Nick was my best guy friend, we never delved into our romantic history (past or present). It never got emotional.

So there was no reason for me to be suspicious when Nick told me he wanted to swing by my studio (that he’d never visited before) and grab dinner. We popped by an art show, got some food, and chatted in the car for a bit before we reached my apartment, as per usual. And the parting convo that started off as normal, funny, smart stuff turned into some not-so-normal, unbelievably sweet stuff…and then he asked me out. The “oh shit” moment happened, and I realized I was in love with my best friend. I did what any sensible woman would do in that situation: I curled up into a ball in the passenger seat, yelled nonsense for a solid five minutes, ran into my apartment, and text messaged all of my girlfriends that they were right.

Nick shut it down on our first date. It was fucking perfect. A lot of dudes put too much energy into the date when they should really be concentrating on the girl (flashy, over-the-top dates make the night all about the dude planning them; no, thanks). Nick went classic gentleman; he picked me up at my apartment with flowers, made reservations at a quiet, high-end (but not pretentious) restaurant, and ordered us the seven-course tasting menu. It was some hot as hell, boss shit. But it was our conversation that really made the evening special. After years of friendship, we managed to make our first date a real first date: We shared our origin stories with one another. I got to learn about where he came from, who he was, and where he wanted to go. And he learned the same about me. We shared our respective dating histories, good and bad. When I responded to a compliment, “You’re really trying to woo me, aren’t you?” Nick replied, “Yeah, fuckboy season is over,” without batting an eye. And he was right. We moved in together three months later.

It has now been over two years into our relationship, and we have yet to get into a fight. It’s basically the best all the time.

One super-important element of our romantic compatibility is that we’re both very comfortable with who we are, and we figured that out well before we started dating. I’ve worked very hard over the last decade to wake up every day and love (or really, really like) who I am. I spent years living single on purpose; when we started dating, I wasn’t looking for a boyfriend to fulfill me. I didn’t need a relationship to be happy or validate my success as a person, and neither did Nick.

Being confident in ourselves isn’t enough; we’re also confident in one another. If someone had asked me before we started dating what I thought of Nick, I would have said, “He’s the best dude ever and I love him!” (Still true.) He doesn’t need “fixing” or “saving,” and there’s nothing about his personality that needs to change for our relationship to work. It doesn’t matter to me that his job is “cool.” It just matters that he’s doing something productive with his life. More importantly, he’s a good person with a kind heart. And like me, not a raging partier. (I’ve found that the dudes I’ve dated who are very into alcohol and drugs use it as a coping mechanism, and will make for shitty boos. This applies to regular friendships, too…)

Most dudes I’ve dated weren’t secure in who they are, and they took their insecurities out on me. I once had a guy say, “Can’t you wear jeans and a T-shirt like a normal girl?” And another one told me that he “didn’t want to hear about my stupid job anymore.” Fuck out of here with that shit. Nick loves it when I’m in my PJs, a “statement hat,” or when I'm wearing more glitter than the cast of Drag Race. When the Missy Elliott video that I worked on dropped last month, Nick texted me midday to tell me how happy it was making him to see so many people show me love.

I’ve prattled on about confidence, but don’t get that confused with ego. Nick and I may be confident, but there is no ego in our relationship. While we do agree on most things, we avoid fights because it’s not worth it to scream about something as trivial as dishes in the sink or shoes on the floor. When one of us is stressed out and a little snappy, the other one doesn’t take it personally because we know it’s an outside issue. It would be really easy to get heated when you’re on the receiving end of this, but checking in on your partner diffuses it and usually leads to an apology (and hugs!), followed by a much needed vent session about work or some other shit.

Not having an ego also means that you can put your partner first. In theory, this sounds like bullshit: You’ve worked so hard on yourself and your career, only so it can take a backseat to someone else? But in practice, it’s a total win if you both adhere to the practice. If you’re with someone who values you as much as you value them, it ends up working in everyone’s favor. I never want to make Nick do anything he doesn’t want to, and he already wants to come to every family function and weird fashion party because he wants to support me. Nick feels the same way towards me, and I go to every rap show, rave, and label family gathering because: A) I genuinely want to, and B) I’d rather be hyping him up at the side of the stage than home alone.

We communicate and take action. Yes, we are at an advantage with four years of friend communication between us, but communicating as romantic partners is obviously very different. Words hold much more weight. But we explain how we’re feeling and how our actions make each other feel.

The craziest thing about falling in love with my best friend is learning that all of the corny, textbook advice I’ve ever heard about love is absolutely true. Who knew? If a guy tells you he doesn’t want a girlfriend, but treats you like his girlfriend, run. If a guy is making you feel bad about yourself, leave. If you don’t trust your guy, you don’t want anything to do with that. If a guy is negging you, he deserves to die alone with whatever fucking scarf he thinks drew you in in the first place. And if you’re looking for someone to be your Mr., Mrs., or Mx., take your time to find someone really special. Once you do, you’ll shake your head at the crap you tolerated before.

Love and friendship are hard. Humans are hard. From the moment Nick asked me out, he’s been nothing but the best, but that’s because he was always that way. It’s worth waiting for a person who makes you feel like a million bucks 100 percent of the tim. They might even be there waiting for you already.