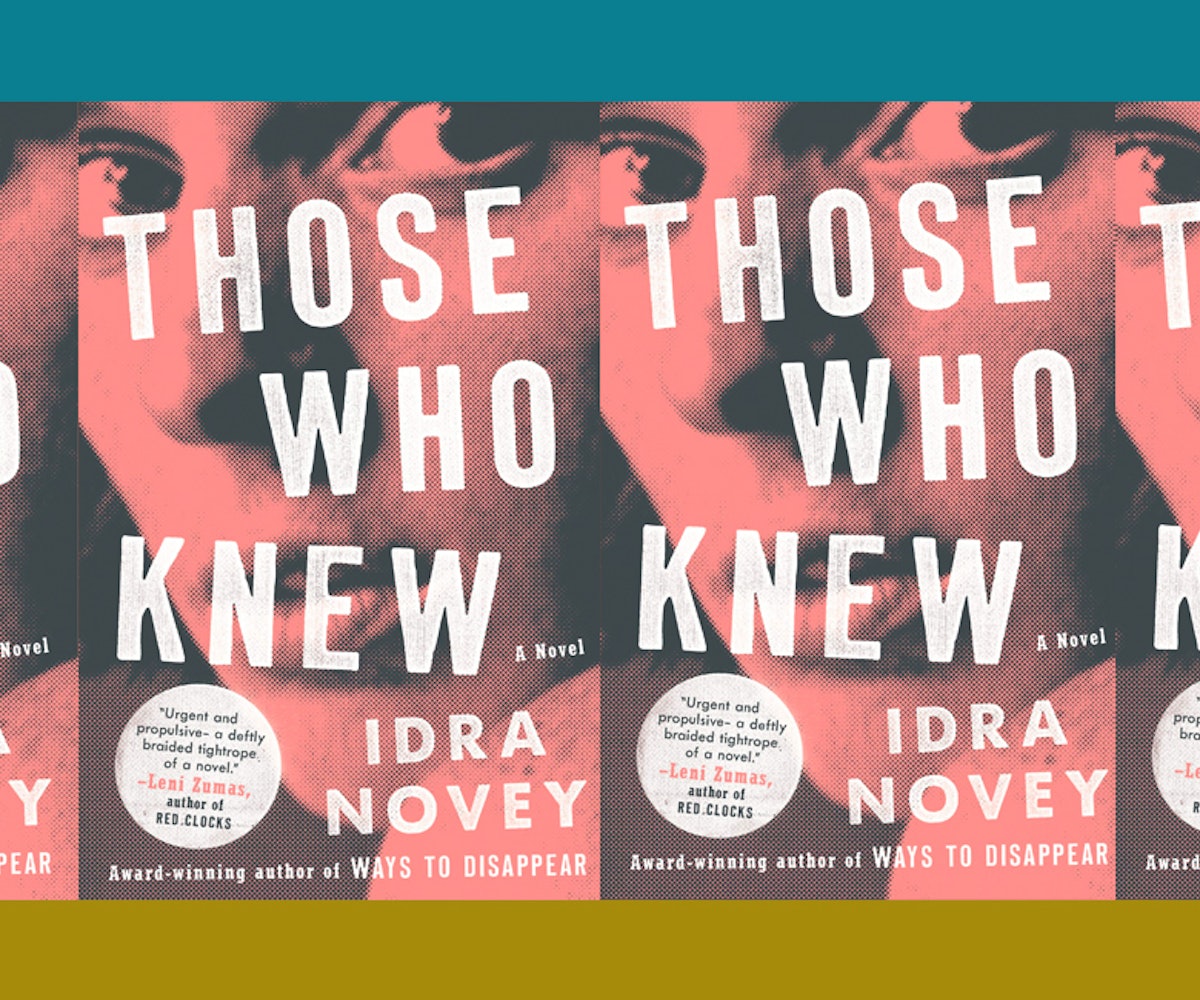 When poet-translator-author Idra Novey walks into a bookstore with her young sons, she thinks about the patriarchy. “You see a stand of books for girls saying, Strong Is the New Pretty,” Novey told me, recently. “But we don’t yet have a stand for boys that says,Kind Is the New Strong.”

She’s right: We’ve made great strides in radically reimagining the confines of girlhood, why haven’t we done the same for boys? That’s exactly what Novey’s second novel, Those Who Knew, which comes out today (voting day!), grapples with: how the patriarchy fucks everyone and everything—women, nations, families, land, and yes, boys—in its path.

Those Who Knew tells the story of a hotshot, progressive senator named Victor, 10 years after the fall of a dictatorship on an unnamed island. On the same island, Lena, a college professor, hesitates when her students display enthusiasm for the senator and his woke Truth & Justice Party’s policies and reforms. What her students don’t know is that Lena’s private past with Victor isn’t the rosy picture the public sees, but a thorny one of violent assaults and manipulations. Throughout the novel, Novey deftly depicts the sometimes jarring dissonance between public and private lives and how that shapes our blind spots.

Though there are plenty of plot parallels to our immediate political reality (Brett Kavanaugh’s appointment on the Supreme Court, an extreme populist elected into the highest office in Brazil, among many others), Novey started writing this book in 2014. She wrote the last thirdof the book post-2016 election, a moment in which she—along with so many others—was pondering how it could be possible that a man who’d once boasted about grabbing women by the pussy had become the most powerful person in the country. “I wanted to write something that felt emotionally true to what patriarchy allows figures like that to get away with,” she said. “That sometimes a lack of remorse can actually lead to more power as opposed to less.”

Novey made the uneasy, but creatively appropriate choice to attempt to inhabit the mind of Victor in parts of the novel—including moments when he’s inflicting severe damage on others for political or personal gain. “Patriarchal thinking is when you have the power, but you think you’re the victim of people who don’t have the power,” she said. In a scene early in the book, after Victor grabs Lena’s wrist a bit too aggressively, Novey writes, “He hadn’t lost control. He’d been responding to her face. She’d wanted him to grab hold of her somehow. She’d marched over looking for it.” A justification. An exculpation of blame. A scapegoat. We see a similar behavioral pattern with our president, she told me. Fiction, fortunately, allows her to tease out this “complicated emotional territory.”

As bleak as the patriarchy can be, Novey also sees writing as a way to imagine a better social future. She grew up in western Pennsylvania in a family that “was always donating blood,” wrote letters for the Anti-Defamation League, and was involved in the local theater. But, they were an exception to the Appalachian rule. While young Idra wrote poems imitating Emily Dickinson, (because that was “all that was available”) and imagined living in a place where people from all over the world could thrive, she noticed a fear of creativity in her peers. When I asked her why she used the word “fear,” she explained that fear of imagination equals fear of social change.“I think if more people exercised their imagination in school in rural places, they could maybe imagine themselves thriving in a world that doesn’t look like the past."

Novey has certainly exercised her social imagination throughout her education and career. She studied abroad in Chile when she was 20 years old and, as a volunteer, translated Louise Glück and June Jordan poems for women in a domestic violence shelter. She went on to live in Chile post-grad and then Brazil for many years and ultimately settled in New York with her Chilean husband where she continued her professional translation work. Her most recent translation is a novel by the late Brazilian author Clarice Lispector, titled The Passion According to G.H.,in which an upper-class Brazilian woman goes on an existential journey after cleaning the maid’s room at the back of her apartment. Translation—which she describes as “the deepest kind of reading”—gave her the courage to try her hand at fiction. When she’s writing, she’s always looking for influences beyond the U.S.

Yet, as liberal as Novey has been in her approach to life, Those Who Knew also examines the theme of compromise; of softening as an adult or giving up on ideas you have about yourself. We don’t always live up to our lofty ideological values, and that’s okay, the book assures us. Novey admitted midway through our conversation that her younger self would be “horrified” at some of her current self’s decisions. In the book, Lena wrestles with a similar psychological stalemate after deciding to send her son to a private school, “She had not expected motherhood to water her down this relentlessly, to dissolve her into the muck of compromise over and over.”

But compromise isn’t the answer to every quandary. There’s a scene late in the book in which Freddy is once again doing damage control on Victor’s behalf and “he wondered what it would take for there to be a true reckoning with the repressive roles men imposed on each other, a moment when acting despotic would finally be recognized as the weakness that it was.” For now, acting despotic is still seemingly cool, but that doesn’t mean we need to accept it as such.

Those Who Knewis available for purchase here.