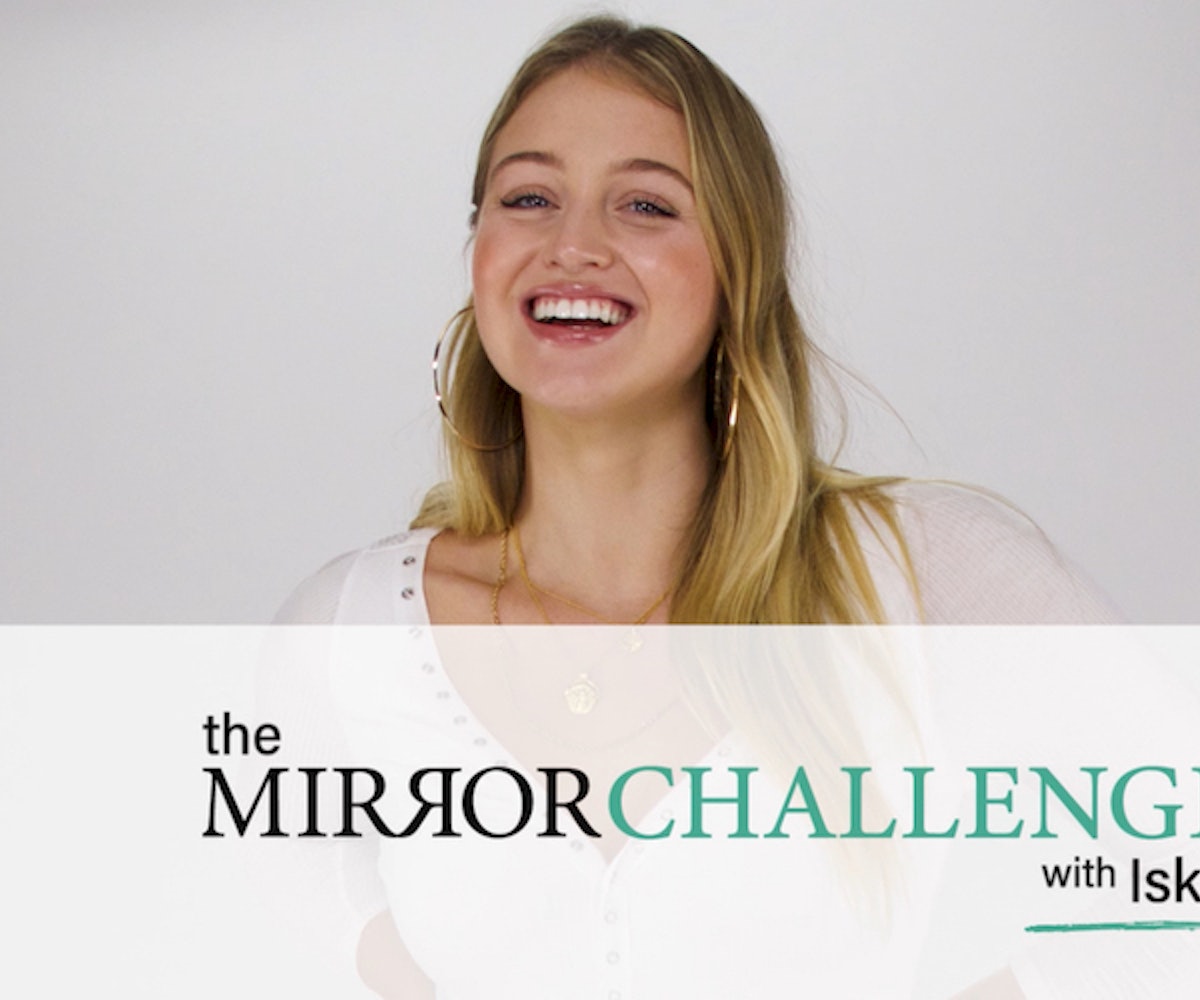 All photos courtesy of Clevver

Iskra Lawrence is a force to be reckoned with: The veteran model, who's been in the game since she was just 13, has not only propelled herself into becoming the model-of-the-moment but also one of the loudest voices advocating for body positivity, inclusivity, and self-care.

After refusing to be Photoshopped in her photographs, Lawrence has gone on to become Aerie’s first Role Model, starring in an un-retouched campaign that made serious waves in the industry back in 2016. On top of that, she’s currently an ambassador for the National Eating Disorders Association, has given a TEDx Talk on body positivity, and is known to voice her opinions openly and empower others through social media. And with four million followers on Instagram, her voice and her platform are only getting stronger.

Now, she’s getting her very own show, The Mirror Challenge, a five-episode series premiering on Clevver later today (tune in to the first episode here). I sat down with Lawrence ahead of the premiere to chat about the show and her philosophies on improving one's body image, and our conversation ended up becoming a personally empowering lesson in self-love. Yeah, Lawrence is pretty magical in that way.

But let's start at the beginning. What’s a mirror challenge, you ask? It’s the act of challenging your own negativity by looking at yourself in the mirror and using positive thinking and affirmations—and it all started with Lawrence's journey to self-love and self-acceptance. “I realized I had to challenge myself in the mirror, to try and see the things that I could accept and then eventually love. I started making little victories for myself, day to day, and it just grew into this powerful relationship of being able to uplift myself by the way I see myself, speak to myself, and the affirmations that I choose to give myself,” she says.

It entails making yourself a bit uncomfortable—staring your biggest fears and self-professed “flaws” in the eye—and then spinning it all into a positive light while working out your inner thoughts and deepest feelings. “I think it eventually stops being uncomfortable, but, initially, it feels that way because we’re not often giving ourselves eye contact and being honest with how we feel. Especially in this day and age of social media, where we’ve got to pretend every day is the highlight reel. We’ve got to be honest with ourselves and say, ‘You know what? For some reason, I do feel like shit, or I feel like my lips aren’t big enough. But why do I feel like that?’ To think, Wow, this is something I’ve always not liked, is there a way that I could fall in love with it? What’s the reasoning behind it?”

About a year and a half ago, Lawrence got to put her mirror challenge theory to the test with three women on a U.K.-based morning show. She challenged each woman to get into a bikini on national television and admit the first thought that popped into their heads when they looked at themselves. Whether it was an issue with stretch marks or feeling overweight, Lawrence then had each woman voice those thoughts, and then compliment one another, flipping the switch on the negative and allowing each woman to focus on the positives. “In my head, I thought, Oh, maybe this is meant to be. Maybe this is something that I can create and make a show about and share it. I got very frustrated with makeover shows that are completely superficial, where you sit someone there’s absolutely nothing wrong with down, and someone else sits down and decides that they will be able to fix them,” she explains.

And thus, The Mirror Challenge was born—a new spin on the makeover show concept, more of a mental makeover than a physical one, if you may.

The Mirror Challenge brings together five different people with very different stories. Whether it’s not being able to accept their natural hair texture or how their body looks following weight loss, everyone on the show brings their own unique experience to the mirror. Each works through their issues with Lawrence, using the mirror challenge to change the way they think of themselves. And, yes, while watching, you should be prepared to cry. A lot.

Through this series, Lawrence hopes to share others’ stories—the challenges, the ups and downs, and the successes—with the rest of the world, knowing that many will be able to relate in some way. “The show is going to share some stories that really need to be heard. The beautiful thing is, all the participants have all said, ‘I’m shit scared. I’m terrified to do this, but I know that, hopefully, my story will help other people.’ I think as someone with my platform, I’m highly privileged. I’ve shared what I have to share about my journey. Now, it’s time for me to create content to shed the light on other people’s stories and let their voices be heard, because, for them, it’s been hard to share their stories, or not knowing who to talk to, or where to share it, or scared of the reactions. It’s going to hopefully be a really powerful little series.”

Getting in front of the mirror isn’t the only tool that Lawrence has used (or taught others to use) as a means of self-care and self-love. Another favorite of hers? Making a gratitude list. “You can make a simple list straight-way as things pop into your head. Like, ‘I love that there are flowers in this room.’ Or, ‘I love that I had Mexican food earlier.’ Once you say these things, you won’t say, ‘Oh my god, I’m so bloated right now,’ because you’re too busy thinking about how the food was awesome. It’s changing that perspective and placing your energy and your thoughts into the positive.”

But, perhaps her most daring moment of self-care was when she stripped down to her underwear on a New York City subway while talking to commuters about the importance of loving oneself.

“It was very much at a point where my career had kind of blown up and everyone was like, ‘You’re this body positive model,’ and I was like, ‘I’ve never called myself body positive. I’m just being me and trying to use my voice and share my truth.’ I thought, People might think this is bullshit. So I needed to know if I was being honest with myself and challenge myself. I always see people talking to strangers on the subway, and I thought that it would be an uncomfortable situation, and I wanted to feel comfortable in my body, so I combined the two. So the day after the election, I called up my friends and said, 'I’m going to do it tomorrow—and I’m talking about speaking my truth, being vocal, and not being scared to express myself and be who I want to be.'”

Of course, the response was positive. Lawrence was cheered and had strangers approach her afterward to thank her for having a positive effect on their mindsets.

The reason that Lawrence is such a powerful advocate for body positivity, self-care, and self-love, though, is because she struggled so much with it herself. While she started her modeling career at 13, she was fired from her first agency at 15 for being “too big.” While this was initially a setback, she was determined to make her comeback. “I was pissed off—straight disappointed,” she says. “I think, especially as I had a taste for it, I’m a competitive person and had done a few shoots and runway shows, and I knew that I could do it. It was very much that I wanted to prove them wrong.” After taking some time off and getting back into the game, she began her current career somewhere between the “average” model size and the plus-size category, essentially creating a path of her own—one that lead to her Aerie, a slew of other campaigns and runway shows, and, now, The Mirror Challenge.

So, what’s next for her? “My YouTube channel is going to be popping again soon,” she says. After buying a new house, she says, she’s created some space for content creation, so we can expect a lot of fitness-minded videos coming our way in the near future.

Do you think you may have a body issue that needs professional attention? Take the National Eating Disorders Association’s free screening tool, here.