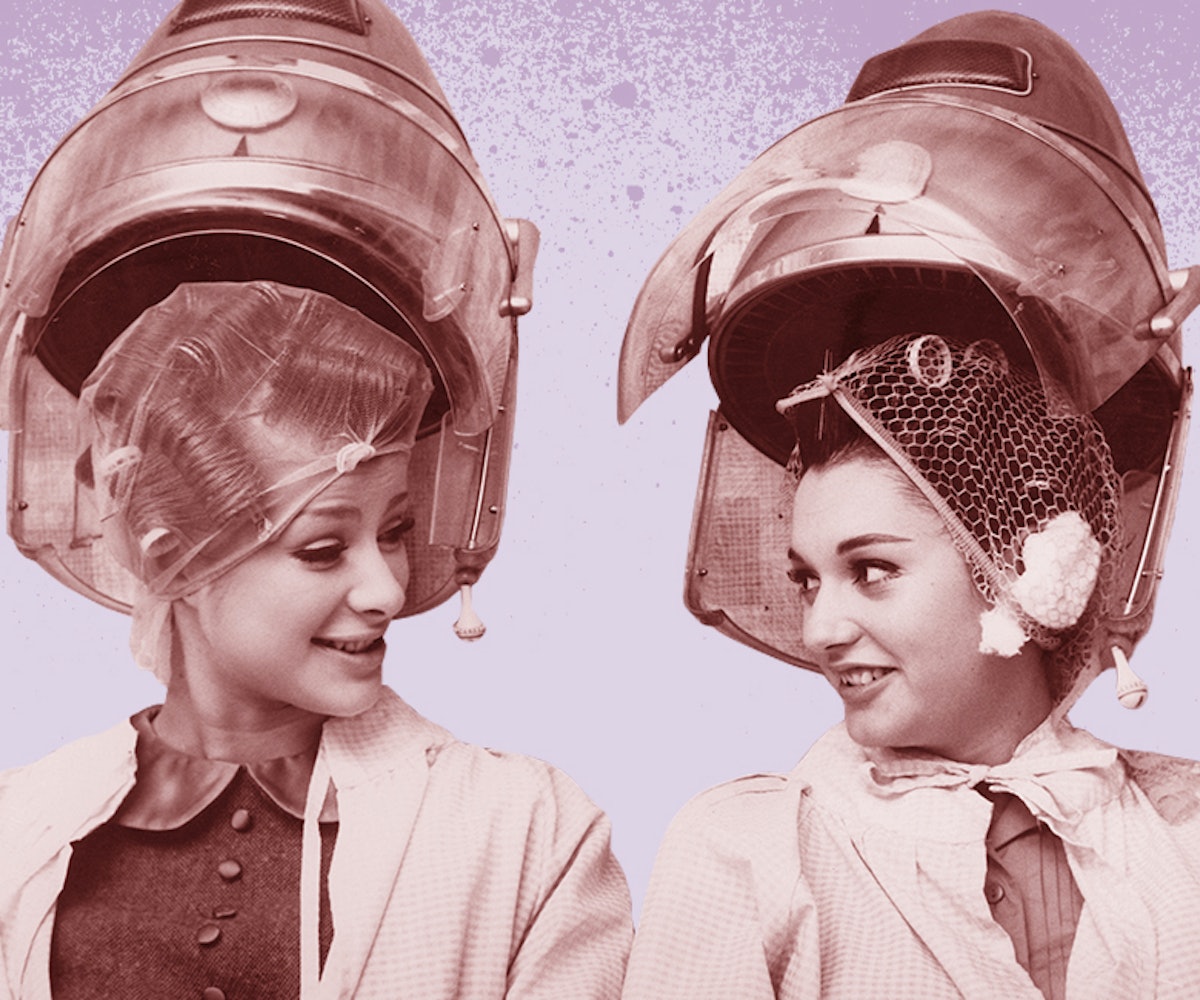 Last August, in a fit of pique, I bleached my hair platinum blonde. I had been highlighting my naturally dark hair for years, but the effect of gradually getting blonder was never quite as dramatic as I hoped or feared, and because I had always been something of a wuss, hair experiment-wise, I calculated that age 30 was the correct time to do something radical. Before I paid an extravagant sum to the man in a Vivienne Westwood toga who would chemically destroy my hair, I obsessively Googled the process. There are many, many posts out there about the process of bleaching your hair, but all of them had a warning in common: This is a process that would be high maintenance.

“High maintenance” is something I had been afraid of being my whole life. It implies a kind of finickiness and fustiness, someone who would prefer not to get their shoes dirty or their hair wet. The woman it always called to mind was the would-be stepmother from the Lindsay Lohan reboot of The Parent Trap, a woman who the twins effectively scared off by taking her on a camping trip where dirt and lizards and retrospectively pretty mean pranks were involved.

But, as I’ve gotten older, I’ve also recognized that “high maintenance” is a not-so-subtle misogynist code word, usually deployed to take certain women down a notch. The standards that women are expected to adhere to are, by definition, incredibly high maintenance. Plucking, bleaching, moisturizing, exfoliating, expertly applying eyeliner, selecting garments to distort the natural shape of your body—what are these things except an incredible amount of maintenance? But it’s frowned upon to admit that this work is actual work, that it’s not just time and labor but also a good deal of money that women are expected to shell out in order to look a certain way. For a culture that fetishizes work, America really hates to see that work in action. What we want is magic: that one silver bullet to transform your appearance, solve your financial woes, change your life to a healthier, more robust one. Witness the number of products it takes to achieve the “no-makeup makeup” look, or all the “just one trick” clickbait pieces on the internet. Life is entropy, and we would all rather have a shortcut than wade through the ongoing turmoil. It makes sense, but it’s rarely possible.

“High maintenance” is a double-edged sword, proof that no matter what you look like, women can’t possibly be allowed to just be. If you follow all the dumb, arbitrary rules, and you’re put together just so, if your hair is well-kept and your teeth are white, and you’re dressed modestly but stylishly, if you’re suspected of actually taking measures to look good, well, you still get criticized for being high maintenance. You can still get Anne Hathaway’ed—work your whole life at being good at something, and you’re still going to get knocked down a peg for looking like you’re trying. No one wants effortful chic.

It’s also a phrase that’s deployed to make women’s emotional needs seem impractical and burdensome, to discourage ambition, and to make sure that if you’re asking for something, you also feel guilty about it. Next time someone describes someone as being “high maintenance,” replace the phrase with “has strict emotional boundaries,” and see if it doesn’t make as much sense. Obviously, yes, there are people in the world who ask too much of their friends, who are oblivious in their privilege, who require being handled with kid gloves. But more often than not, people have good reasons for their requests, even if they seem idiosyncratic from the outside. Slapping a label on a person whose emotional state you don’t understand, or don’t wish to put in the work to understand, is both easy and lazy.

So I decided to embrace high maintenance-dom. My hair now has the constitution of an asthmatic Chihuahua—it must be babied and cared for, rather than my usual method of ignoring it until it starts looking like the end of a frequently used broom. And I found that in a weird way, it was good for me to have to pay more attention to some hard rules I set for myself, even if they were just vanity-related. I don’t wish to conflate capitalism and self-care—paying someone every eight weeks to touch up your roots is not what Audre Lorde was talking about. But I have always had a tendency to try to act more laid-back and more laissez-faire than I actually am. There’s no pretending that bleaching your hair the opposite of its natural color is laissez-faire.

And so I tried to expand this notion to other issues in my life more weighty than hair, things that might stick with me after I give up on my Courtney Love era and return to a less finicky routine. I made an effort to be empathetic to people whose emotional boundaries didn’t make sense to me, and I tried to be more transparent about mine. I tried to stop acting like I was okay with things that bother me, even if a cooler person would just let them go. A cooler person would probably stay for another round, but the person I actually am knows that if I don’t get to bed by midnight on a weekday, I’m going to feel gross the next day. A cooler person probably wouldn’t need to delete Instagram for the weekend when it gave them creeping anxiety. But I am not a cooler person, I am just a messy, regular human. Putting your messy regularness on display is generally discouraged, but it's also essential. The goal isn’t to become a selfish monster, but to admit that life requires maintenance. It’s fine to put in the work. You don’t need to apologize for it. We all need to maintain, one way or another.