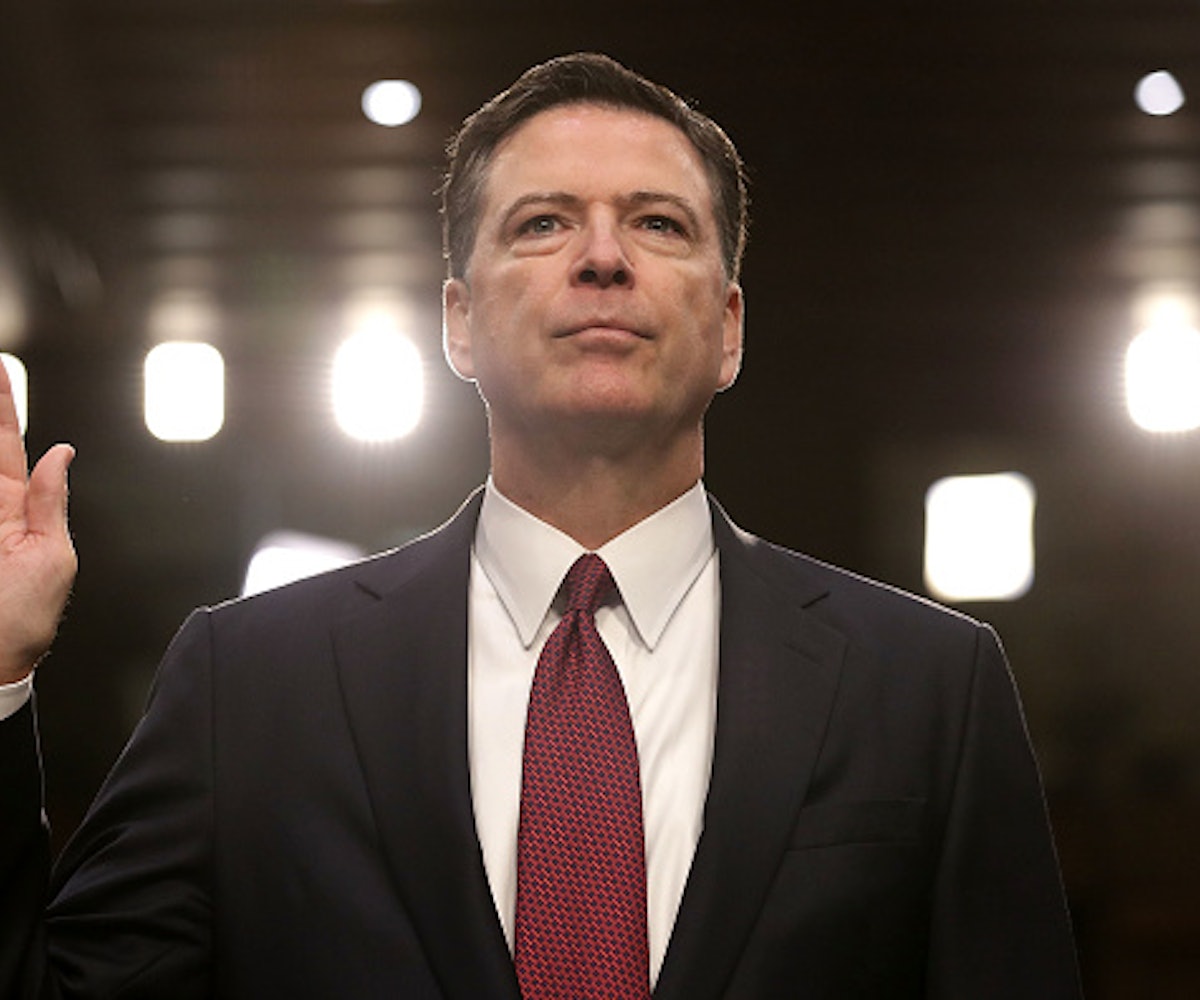 For some people, today felt a little like Christmas morning. A lot of us woke up extra early because we were too excited for Comey Day, what Twitter dubbed the day fired former FBI director James Comey would testify in front of the Senate concerning his unusual meetings with Donald Trump, during which the president asked for "loyalty."

The two-and-a-half-hour hearing was every bit as thrilling and dull as we all expected. Maxine Waters didn't play games, Donald Trump Jr. couldn't find his pacifier, and no one could figure out what was going on with Senator John McCain.

Here are the best tweets from Comey's hearing today.

In his opening statement, Comey called what Trump said about him and the FBI, "lies, plain and simple." He could've dropped the mic right there, but, unfortunately, he had to continue to speak for another two-plus hours.

"Lordy, I hope there are tapes," Comey said in reference to Trump's threatening tweet, in which the president said the former FBI director "better hope that there are no 'tapes' of our conversations before he starts leaking to the press!"

The most tweeted about moment from the testimony was McCain's bizarre questioning, in which he was trying to ask Comey if he felt Trump's actions rose to the level of obstruction of justice, but he never quite got there. Instead, he kind of rambled about Hillary Clinton's emails.

A lot of people were frustrated to hear about Clinton's emails again.

People also noticed that Trump wasn't firing off a string of asinine tweets, as per usual. Some suspected his aids changed his password on him. Or maybe promised him a "big special golf surprise" that would never come.

Some people wanted to give Comey the same treatment as Clinton or any other woman in politics would've gotten, by commenting on his outfit.

Everyone was eager to watch Trump and his lawyers scramble to get out of this mess.

There was a moment where we all realized this hearing was not as exciting as we'd hoped it'd be.

Someone reminded us that Trump is most definitely not supposed to be president, by posting a throwback photo of him from this time seven years ago, cutting the ribbon for a bus company's public relations event.

It became clear, after hearing his lawyer's statement, that Trump doesn't understand how badly he was owned in Comey's testimony.

Yesterday before the hearing, Auntie Waters pointed out how women everywhere can relate to Comey.

Viewers realized there was a clear difference between the Democrats' questioning and Republicans'.

Basically, today we acquired even more proof that most of the words that come out of this hot bag of mayonnaise's mouth are lies.

People were dealing with a lot of mixed emotions when rooting for Comey.

Any question Comey couldn't or didn't want to answer in a public testimony, he'd respond that he couldn't answer "in an open setting." Everyone is gonna use that to get out of something they don't want to do.

Not so fun was Trump Jr. live-tweeting Comey's testimony. While Trump hasn't said a word (because his aides have locked his phone in a safe, or maybe hid it in a book where Trump would never look), his son couldn't keep his dumb mouth shut. Like father, like son, I guess. The grown toddler made a list of winners and losers today, inexplicably his and his father's names weren't listed under "losers."

It's okay Donald Jr., there are other ways to get your dad's attention. Have you tried being Ivanka?

NEXT UP
Life
NYLON Daily Newsletter: November 29, 2922
Fashion
Reformation & Canada Goose Team Up To Warm You Up
Culture
Not One, But Two BTS Documentaries Are Coming
Astrology
Your Natal Saturn Placement In Astrology, Explained