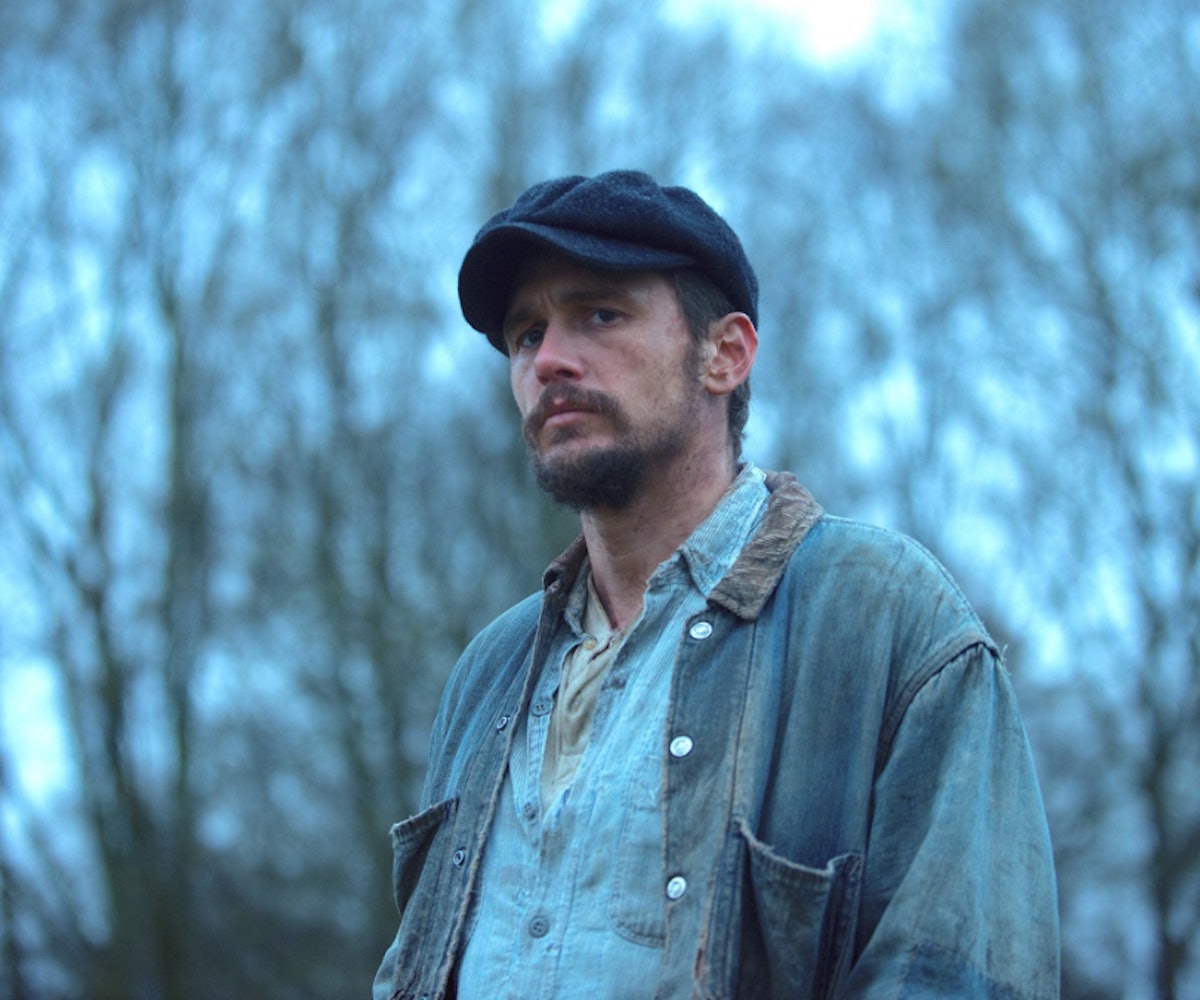 At this point in his singular career, James Franco is a veteran director. Once groomed to be a leading man, Franco famously pivoted towards other artistic and intellectual pursuits like writing, performance art, and even music. But with dozens of directorial efforts under his belt, it seems like Franco is most comfortable behind the camera. His latest is the drama In Dubious Battle, an adaptation of the John Steinbeck novel about Depression-era Californian farmers who become swept up in a roiling labor movement that eventually careens towards violence. Franco, who appears in essentially all of the films he directs, plays Mac McLeod, who, along with Jim Nolan (Nat Wolff) incites a group of disenfranchised apple pickers to rise up against their devious employers. The movie’s sprawling cast includes names like Selena Gomez, Ed Harris, and Josh Hutcherson, who all joined Franco, a Steinbeck fan since his youth, to realize his passion project. This Friday also sees the release of The Institute, a horror movie Franco co-directed and stars in that will be available on VOD and in theaters. We spoke to Franco last week about his movie’s parallels to our current political climate, why he acts in all his movies, and why he believes he’s entering a new phase in his career.

How many times did you read In Dubious Battle before making this movie? How familiar were you with the book?

I read it a few times. I've loved Steinbeck since I was in high school. I grew up in Palo Alto, California, not far from Steinbeck country, and I started reading his books when I was a teenager. Steinbeck really felt like a friend, in a way. Then I did Of Mice and Men on Broadway, about two or three years ago, and I was reunited with Steinbeck, and thought I'd love to do a Steinbeck movie. In Dubious Battle was one that he wrote early on. It's part of what's called the Dust Bowl Trilogy, and it was the first one. In some ways it wasn't as well written maybe as The Grapes of Wrath, But what's in there is this very clear-cut conflict between two sides. I thought that could be really cinematic, to have that conflict that once it starts, never stops. It just keeps on ramping up. It's almost like Hatfield and McCoys, the way it just kind of goes back and forth and gets more and more intense.

There are a lot of parallels between this story and what's happening in this country now in terms of the populist movement and class warfare. Were those parallels apparent to you when you made the movie?

"There are a lot of parallels, but we started shooting a while ago,  so we couldn't predict Donald Trump. I think we really tapped in on a sort of eternal theme in terms of conflict, whether it's people in power or without power. This is kind of an ongoing thing, so the conflict within it is certainly relevant today. The other thing I like to think about too is the characters in my movie: It's about a labor strike, an apple pickers strike, and the apple pickers, they're not political people. If they could, they would have just done their work and lived their lives and just gotten by. But they were pushed into a corner, and it was either fight their way out or perish. They weren't really given a choice, so they had to get politicized and then get political and stand up and join together. That, I think, is also a very apt parallel. I can't remember a time in my life when so many people around me are now becoming more politically aware and involved, and for a lot of them, or at least some of them, it's because they are being pushed into corners and their way of life is being threatened in a very real way."

How do you get a global pop star like Selena Gomez to appear in this tiny Steinbeck movie, or any of the other very impressive cast members? Is it as simple as texting friends?

"Yeah, Selena I knew from Spring Breakers. It's not like I'm randomly throwing out a million texts and seeing who I get. I knew Selena was really talented and she's never really done a movie like this, and I thought it would be kind of a surprise weapon, and I had faith that she would kill it, and she did, and this would be a part that would really speak to her, you know, as a young mother. I kind of I sensed that she'd be able to have maternal instincts and would really take to that. I guess what she said to me when I asked her was like, 'Yes, I want to be, I want to experience your world.' And so I think she was maybe looking to change things up. She's really good about that. Doing Spring Breakers was her trying something else, and I think she's really kind of brave in that way. As far as the others, I'd worked with some of them before. Ed Harris and Robert Duvall and Bryan Cranston I had met because we were preparing to do a movie together, and those guys are actors/directors, so they can understand what it's like to have a passion project."

Why have you appeared in pretty much every movie you've made?

"I can think of one of them that I didn't really. I mean, I had a tiny part in it. I was in one scene or two in Child of God and I had a great experience on that. And I remember in film school I made a short with Michael Shannon and that was the first experience I really had as a director where it was like, 'Wow, I am directing an actor that I respect so much.' I had the feeling again on this movie, like, 'Wow, I better rise to this actor's level,' you know, as a director. I'm so lucky and humbled that they're doing my film, I don't want to let them down, and more than that, what you get from a great actor is you know you're surprised. The actors will bring so much that you didn't think about, and that's one of the most satisfying things as a director. And when I act in my own movies, it's harder to have that kind of surprise. You're certainly not collaborating in the same way and building with somebody in the same way. One of the basic reasons that I'm in a lot of them is it helps get the movie made. And a lot of these movies that I've made are passion projects. A lot of them are very literary. Being in them is just one way to help get them made. I love acting, but if I can have it another way, I would prefer sort of not to act in my own things. I think doing one or the other in one time is much more satisfying."

At one point in your career, there was so much attention paid towards your different artistic pursuits. Do you think that scrutiny has disappeared?

"There are times when I think it's died down a little bit. I don't know either because I feel like I'm sort of changing now so much, it's definitely like a transition period. But it was really good for me. The way I learned how to learn to do something is to do it. I do it and do it and do it, and keep doing it, and maybe I took that to a strain, but there's a lot of reasons I think I needed to just grow a lot. There were a lot of things I was interested in and a lot of things that I wanted to do, and then the time was right and I could get these movies made. But I also like to think, to answer your question, that not only maybe the people around me or critics or whatever, sort of understand it's what I do now, and it's not such a novelty anymore. I also feel like I'm entering a new phase of just slowing down. That I've made a lot of the things that I wanted to make, and now it's like, okay, let's slow down and figure out what's the new phase, what's the new way of going about things."

Your next film The Masterpiece will be your most commercial and accessible to date. Was that a deliberate pivot on your part?

"Yeah, I went about that in a new way. But first of all, we've sort of gone back and forth on the title. I guess it is called The Disaster Artist now, but that was based on the book's title. Whether it was conscious or subconscious, I asked Evan Goldberg to produce that movie because I wanted to try directing and making a movie in more of kind of a studio model, and I like that it was a project with a subject that easily could be as much as a Steinbeck project, in that it's about artistry and Hollywood and making movies and and all these things that I'm interested in, but it also has a kind of a comedic side to it, and a more commercial aspect to it that would allow us to make a studio film, but also have it sort of be the kind of movie that still has our sort of stamp and voice."

NEXT UP
Nylon Nights
Backstage with UNI and the Urchin’s Charlotte Kemp Muhl and Jack James Busa
Entertainment
Samia On 'Honey' & Saying The Ugly Part Out Loud
Culture
6 Shows To Binge Once You've Finished 'The White Lotus'
Entertainment
Gracie Abrams & Gia Coppola On The Joy Of Free-Flowing Collaboration
Style + Culture, delivered straight to your inbox.