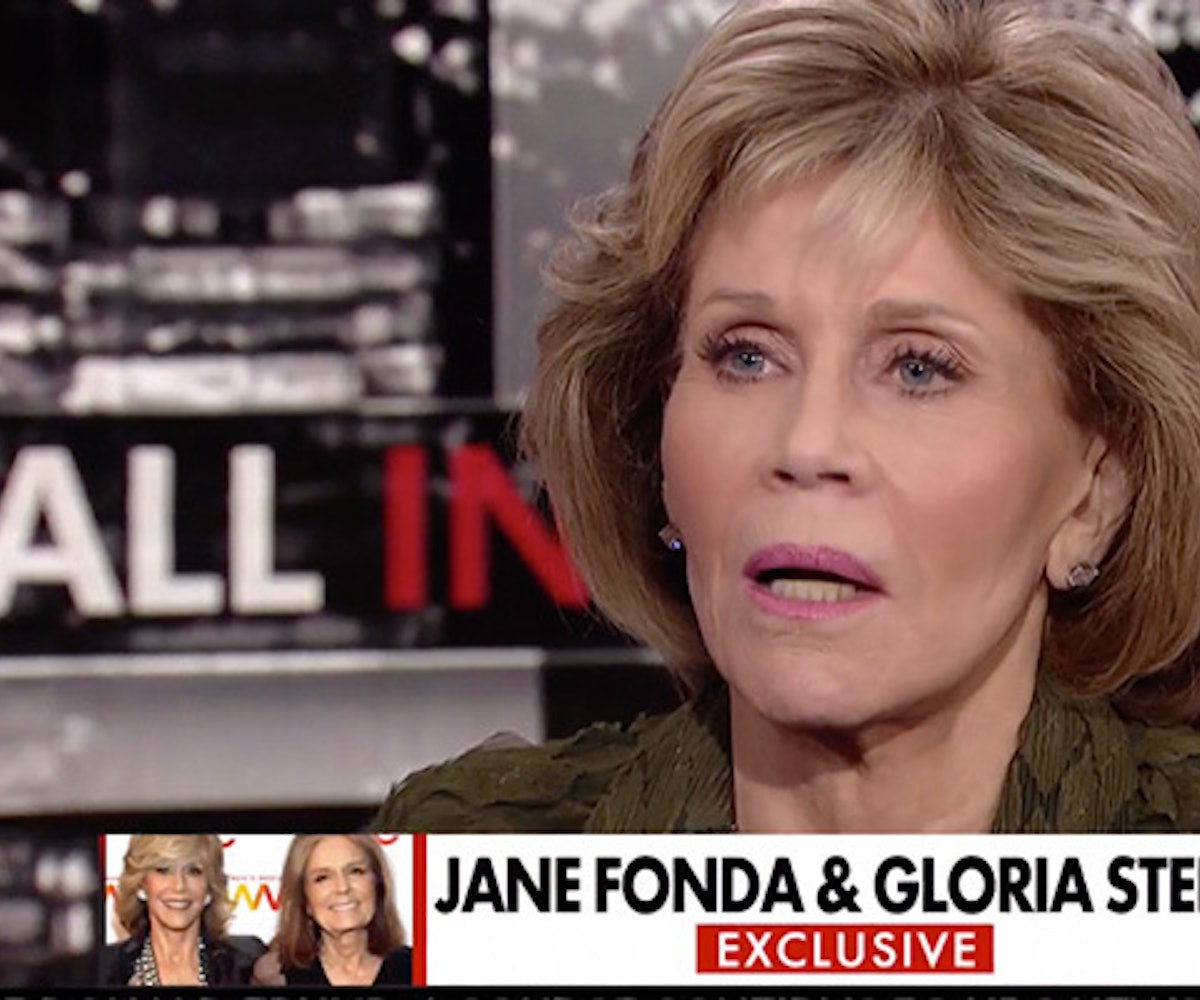 In an interview with MSNBC's Chris Hayes, Jane Fonda said she feels like "something has shifted" since Harvey Weinstein's sexual assault allegations came to light, adding, "it's too bad that it's probably because so many of the women that were assaulted by Harvey Weinstein are famous and white."

"This has been going on a long time to black women and other women of color," Fonda continued, "and it doesn't get out quite the same." The actress, who appeared on the show alongside Gloria Steinem, echoed what a lot of people have been saying in respect to the sexual abuse allegations against R. Kelly. Reporter Jim DeRogatis published a damning report at BuzzFeed earlier this year that accused the rapper of decades of sexual and physical abuse. And yet, R. Kelly's faced no consequences.

After The New York Times published the exposé on Weinstein, he was fired from his own production company, at least one-third of the company's board stepped down, and a long list of A-listers spoke out against him. Most of R. Kelly's victims are young black women, whereas Weinstein's are wealthy, well-known, white women. While covering the R. Kelly story in 2013, DeRogatis wrote for The Village Voice, “The saddest fact I’ve learned is: Nobody matters less to our society than young black women.”

Later in the interview with Hayes, Fonda also drew attention to the fact that this is happening to millions of everyday people, like waitresses who rely on tips because they don't earn a living wage. "It becomes the norm," she said. "[Women think] 'This is just the way life is.'"

Since Weinstein's history of assault was exposed, other survivors in other industries have come forward. More than 200 women have accused director James Toback of sexual harassment, and journalist Mark Halperin was put on leave from his job at MSNBC after at least seven women alleged he sexually harassed them. But, it's important that we're giving equal attention to all of these stories, and getting equally outraged on behalf of the victims.

"If you steal money, you probably get arrested and convicted because everyone says stealing is wrong," Steinem told Hayes, "but if you do something that's very sexist or racist, because there is still a critical mass of bias in this country, it takes more cumulative instances for it be recognized. We have reached a tipping point I think."