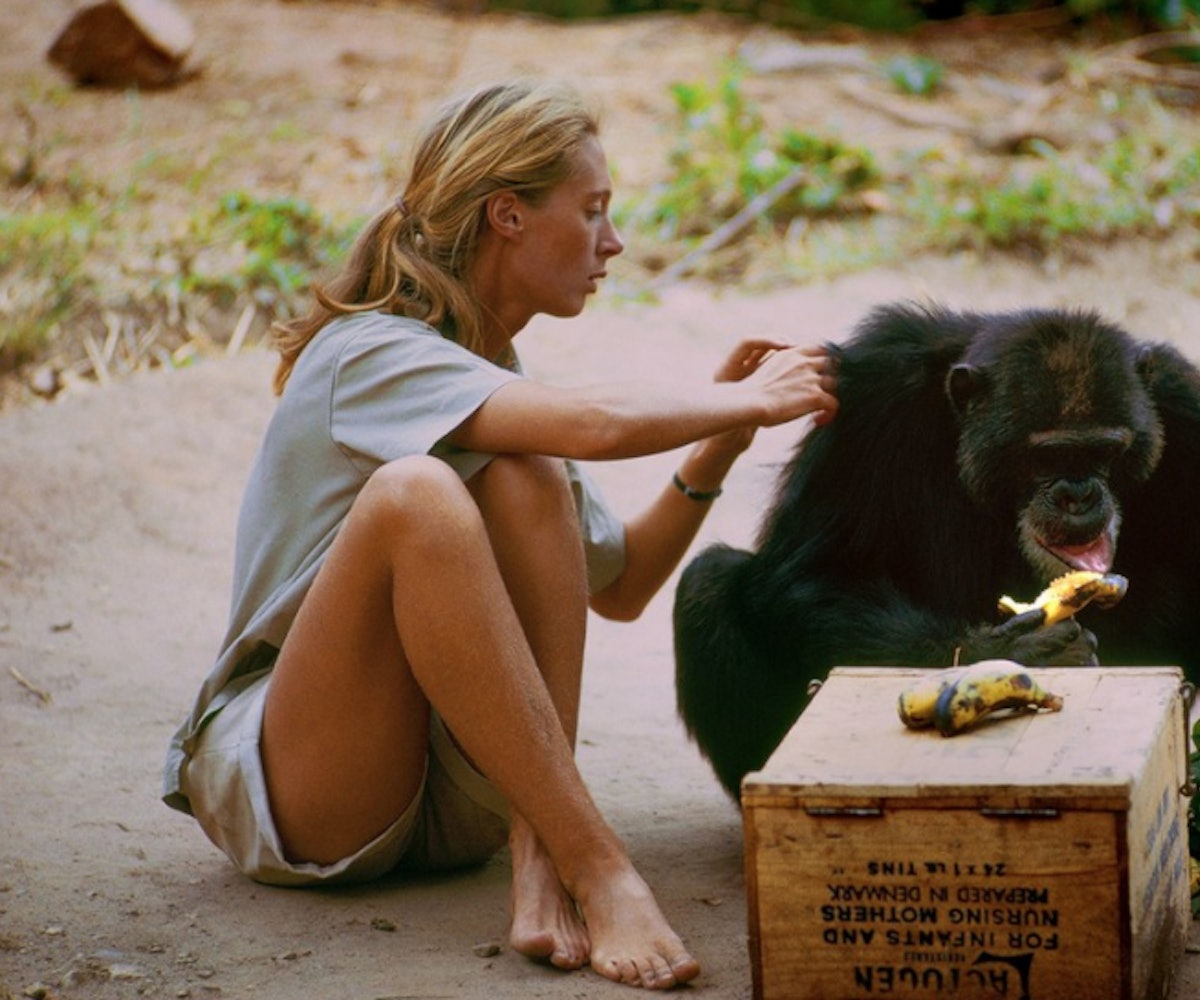 There's a danger in watching footage of animals in the wild. It comes in the moment when you think to yourself, Oh, look. They're just like us! This tendency to anthropomorphize animals is difficult to fight, but it's worth going one step beyond that urge to allow yourself to think, Oh, look. We're just like them.

This, anyway, is the small mental struggle I found myself having recently when watching Jane, a new documentary by director Brett Morgen (Kurt Cobain: Montage of Heck). The film is primarily made up of recently rediscovered footage, shot in 1962 by renowned wildlife cinematographer Hugo van Lawick, of a young Jane Goodall, who had only months before begun her immersive study of chimpanzees at the Gombe National Park in what is now Tanzania.

While watching the gorgeous, ultra-saturated images, I found myself, at first, thinking about how these chimpanzees—alpha male, David Greybeard; matriarch, Flo, and her children, Fifi and baby Flint—were recognizably human in their mannerisms and emotional impulses, from the ways in which Flo cared for her children to how David Greybeard asserted his dominance. But it wasn't long before those thoughts were subsumed into a larger realization of how inherently absurd it was to attempt to place wild animals onto some sort of human spectrum, because the reality is that humans exist within the wider context of the animal world; we are no more or less exceptional than any other creature. We simply are what we are. (This might not be the most original observation ever, and is perhaps akin to one more typically induced by eating mushrooms while on a weekend upstate with friends than by watching a documentary, but whatever. It still felt minorly revelatory while sitting and viewing footage of some of the most biodiverse areas on the planet.)

Anyway: The ability to properly contextualize humanity's place in the natural world was helped by watching Goodall among the animals, which include not only chimpanzees but also spiders, scorpions, and snakes. It feels, initially, almost intuitive to view Goodall—and, by extension, all humans—as exceptional beings. We are, after all, the only animals to have developed methods of communication which have allowed us to study and record the behaviors and dispositions of other animals, in turn often bestowing upon them qualities which we view as being specifically "human." And Goodall herself is clearly an exceptional person; she went to Gombe as a woman in her 20s, with no substantial scientific background, lacking even a college degree (she eventually obtained a Ph.D. from Cambridge, without ever receiving an undergraduate degree).

But even Goodall's exceptionalism is implicitly—brilliantly—called into question by the very fact that she is being studied by van Lawick from behind the camera, in a not wholly dissimilar way to the one in which she is studying the chimpanzees. There are shots of Goodall washing her hair in a stream (following the screening, Goodall commented, "I don't know why everybody loves me washing my hair"), barefoot and climbing trees, and jumping through the bush. It feels, watching this footage, like we are observing something close to Eden, something that exists outside of the structures of civilizations, structures we have artificially imposed upon ourselves to one degree or another over the last several millennia. It is hard not to long for something simpler, something more... primal, and to think that what separates us from the chimpanzees could be easily dismantled, if only we let it.

And yet: The original Eden was, of course, ruined by the introduction of knowledge; Goodall's Eden—which, incidentally, had an Eve who existed long before an Adam came along—is one which is predicated on the hunt for knowledge. And whereas the parable of Eden exists to explain human exceptionalism (we are the only ones in possession of knowledge), Goodall's Eden turns that conception on its head when Goodall makes the historic discovery that chimpanzees make tools, an activity that scientists had assumed, prior to her research, was only done by humans.

What Jane does then—by inserting Goodall into the film, by not simply using typically omniscient wildlife shots, which completely excise the people behind the camera—is demonstrates the ways in which it is possible to have a collaborative experience with nature. It doesn't need to be an all-or-nothing proposition. This message is a particularly pertinent one right now, as climate change continues to impact our delicate environmental equilibrium in countless ways—including by affecting the chimpanzee population in Gombe. Eighty-three-old Goodall doesn't do field work anymore; for the last 30 years, working with the Jane Goodall Institute, she has been raising awareness and money to address the plight of the chimpanzees (their numbers have dramatically decreased in the last century; Goodall says, "[They] are down from about somewhere between one and two million, 100 years ago, to maximum 250,000") and other environmental concerns.

For many people, the devastating realities of climate change are not something they can internalize until they witness the effects firsthand. Jane offers a glimpse into what it is that we'll be losing, if habitats like Gombe fall prey to things like climate change and overdevelopment, and it does so by making clear that the natural world and the human world do not need to be seen as being in opposition to one another, but rather as part of one cohesive unit—a unit that, sadly, risks being destroyed should we, as a species, continue to fail to see ourselves as what we are: animals who are singularly capable of destroying this planet for every other living thing on it.

Beyond these bigger picture concerns, however, it is impossible not to be swept up in Jane's wholly unconventional love story, that between a woman and the wild. What makes it particularly fascinating is that the film also reveals a fully conventional love story; following their work together, Goodall and van Lawick fall in love, get married (he proposed via telegram), and have a son, Grub, who Jane raises similarly to how she watched Flo raise Flint. But Goodall and van Lawick's marriage ends, eventually; their ambitious career pursuits took them in two different directions. And yet this doesn't mean that there isn't a happy ending to the film, because what becomes clearer and clearer is that it is Goodall's love not only for the chimpanzees, which is the real story here, but her love for all things wild, and her desire to tell the world of the wild's importance. This film is a testament to that desire, a powerful one, which is bound to leave many people thinking to themselves at the end, Oh, look! I want to be just like Jane.